Jerel Brown as a majestic African elephant leads the audience on a harrowing journey in Zoetic Stage’s “Mlima’s Tale” at the Adrienne Arsht Center through Oct. 30. (Photo courtesy of Justin Namon)

Zoetic Stage’s stunning Florida premiere of “Mlima’s Tale” is mindful of the suggestions Pulitzer Prize-winning playwright Lynn Nottage offers in brief notes at the beginning of her script.

The stage, sparse and open, “invites transformation.”  Projections provide a shifting sense of place.  The play’s 16 scenes flow from one to the next with a constantly shifting cast of characters orbiting around what remains of a tragic presence they cannot see:  Mlima, an African “big tusker” elephant slaughtered for his incomparable, perfect, priceless ivory. 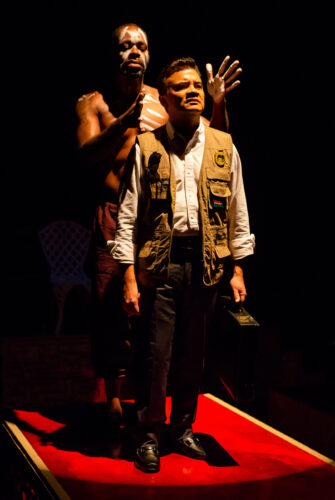 Nottage, whose eclectic body of work is being produced throughout the country this season, tells the painful story of the illegal international ivory trade in a powerfully evocative way — impeccable research blends with her observational skills and intricately revelatory dialogue.

But what Zoetic’s minimalist yet highly stylized “Mlima’s Tale” also underscores is the way a great play can become an invitation to risk-taking creativity and a spur to excellence as artists collaborate on a new production.

“Mlima’s Tale,” now playing in the Carnival Studio Theater at Miami’s Arsht Center through Oct. 30, is not, as you might fear, a play that becomes too overwhelming to watch because of its grim subject. 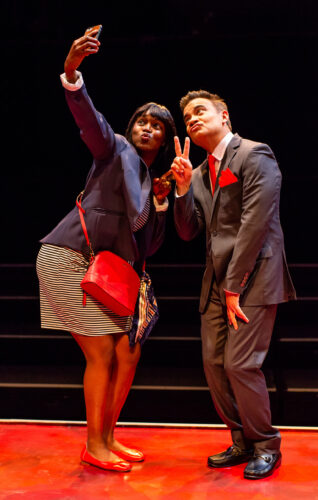 The design team’s vital contributions are breathtaking, absolutely key to the storytelling in a piece that blends elements of an African folk tale with a stinging rebuke to man’s failed stewardship of nature.

Michael McKeever’s set uses a traverse stage sliced down the middle by a gap that transforms into a river or valley or a place awash in blood.  On screens floating above each side of the playing area, video director DelaVega, media producer Nathaniel Connella and projection mapping designer Steven Covey communicate place and feeling via shifting images – a menacing crocodile swimming just beneath the surface of a river, an elephant family happily congregating, a haunting moon so massive it dwarfs Mlima, brutal death symbolized by a roomful of ivory tusks on a floor in Vietnam.

Lattice work that evokes an elephant’s rough hide surrounds the stage. Stenciled onto the video screens, it subtly imprints on the images, further transforming as Rebecca Montero’s lighting washes over it – the blood-red and ivory-white lighting in particular. 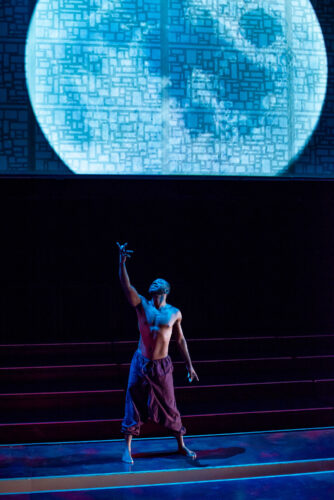 Sound designer Matt Corey brings Africa into the space as startled birds take off, a lion roars and hidden poachers struggle to remain unseen by their prey. The work of Corey and costume designer Marina Pareja helps to pinpoint locations on the journey with Mlima’s flawless tusks as they’re moved from Africa to Vietnam to China.

Mlima and more than 20 other characters tell Nottage’s story, but just four actors appear onstage.  Jerel Brown plays Mlima, embodying the elephant, his tusks and his spirit.  All other roles are divided among Phillip Andrew Santiago, Paul Torres Wong and Sydney Presendieu, who must change characters, costumes, accents, and sometimes gender from scene to scene.

Brown’s challenges in “Mlima’s Tale” are daunting.  He’s a man portraying an elephant, a creature who moves with grace, power and control through a world where death lies in wait. In his opening monologue – his longest speech in the play, delivered with a Kenyan accent – the anthropomorphized Mlima speaks of his history, his beloved mate Mumbi and their offspring, the wisdom of elders and his desperation to keep his family safe. 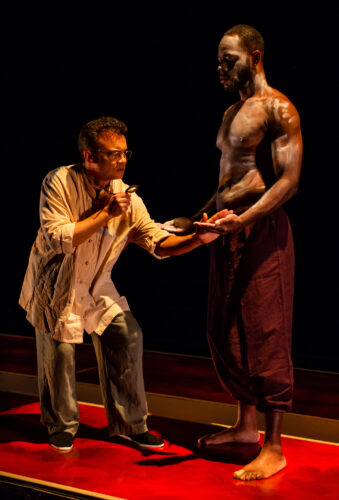 With movement direction by Herman Payne, the tall and muscular Brown uses his dancer’s body with utter control, conveying the stealth of the live Mlima, his fighting spirit and the agony of his death.

After, embodying Mlima’s tusks, he is an unseen force haunting everyone who seeks to profit from his death. Imposing (Mlima means “mountain” in Swahili), ominous as he marks each scheming player in the saga with white paint representing his ivory, Brown is dignified, expressive and magnetic.  His final appearance, when Mlima’s tusks have been transformed from a $300 payday for the poachers into a work of art sold for nearly $1 million, is soul-shattering.

Torres Wong, Santiago and Presendieu display their transformational mojo as they move from character to character, some more significant than others.  The necessary quick costume changes aren’t always quick enough, briefly slowing the story’s momentum, but that will likely get tighter during the run.

Certain characters seem to inspire the actors – for Santiago, for instance, it’s a Vietnamese hipster who’s a player in the ivory carving trade; for Presendieu, it’s a power-conscious Vietnamese customs official who enjoys tormenting an American cargo ship captain – but it’s Torres Wong who most consistently delivers an array of finely detailed characters. Very impressive. 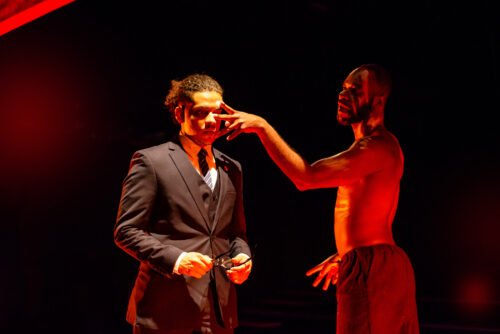 Overseeing everything is Meltzer, who found the right collaborators to bring his  vision for this production to life.

The director made the decision to have the characters flinch or recoil in pain as Mlima leaves his mark of complicity, lies and cruelty on each one.  For Nottage’s proverb-like scene titles – including “No one tests the depth of the river with both feet,” “Don’t think there are no crocodiles because the water is calm,” “Do not look where you fell but where you stepped” – he chose to have them projected onto the video screens, thus reinforcing the play’s folk tale quality.

Depending on the theatergoer, “Mlima’s Tale” can be a call to action and involvement.  But for anyone who sees it, the production is thought-provoking theater of the highest order, the work of a superb playwright inspiring her fellow artists.

WHAT: “Mlima’s Tale” by Lynn Nottage