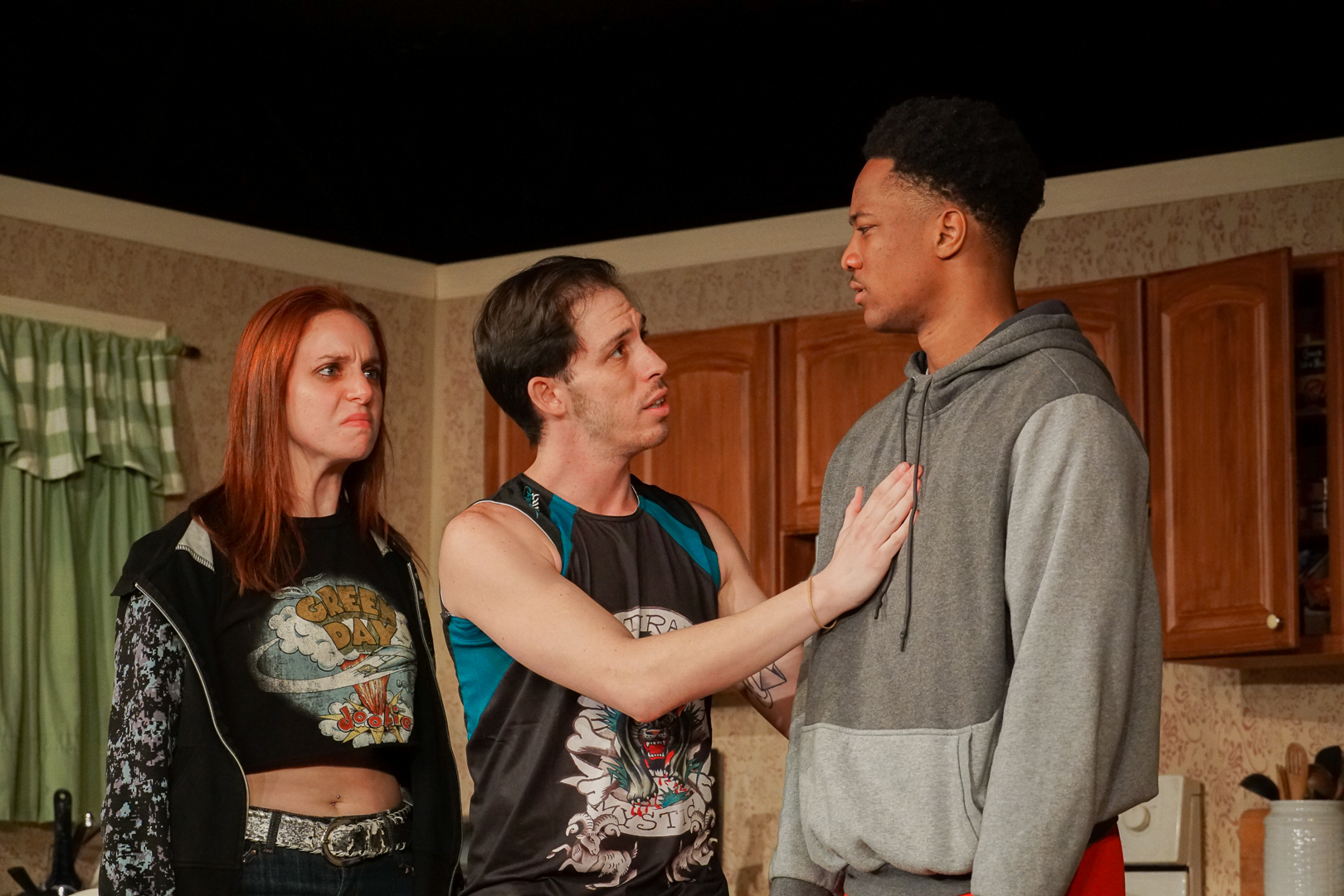 Melissa Bibliowicz, Brandon Hoffman and Joshua Lyons manipulate each other in the world premiere of “Wolf & Badger.” (Photo courtesy of Olimac Media)

From the Bible’s Cain and Abel to the Tyrone boys of “Long Day’s Journey Into Night” to the polar opposite siblings of “True West,” warring brothers have always been a fertile source of drama.

Playwright Michael John McGoldrick has drawn from that thematic well in crafting “Wolf & Badger,” a drama now getting its Main Street Players world premiere in Miami Lakes with artistic director Danny Nieves at the helm.

Set in upstate New York after the 2008 financial crisis, the play takes on not just the fraught relationship of at-odds brothers but the many factors that got them to what could – or might not – be a turning point. Familial, societal, racial and economic forces have shaped the two angry young men, bringing them to this clear fork in life’s road.

Landon (Brandon Hoffman), the elder brother, is an aggrieved 26-year-old whose wife has just given him the heave-ho. After being fired from what could have been a legit career as a plumber, he turned to dealing opioids, supporting and ensnaring his family with the profits from misery.

His younger half-brother, Maddox (Joshua Lyons), is 19 and the caregiver to their seriously ill mother. The next morning, he’s to be tested and sworn into the U.S. Army, so he’s pushing back hard against Landon’s demands that they go out for one last night of partying. Like his older brother, the biracial Maddox has plenty of demons, including a clear case of obsessive-compulsive disorder. 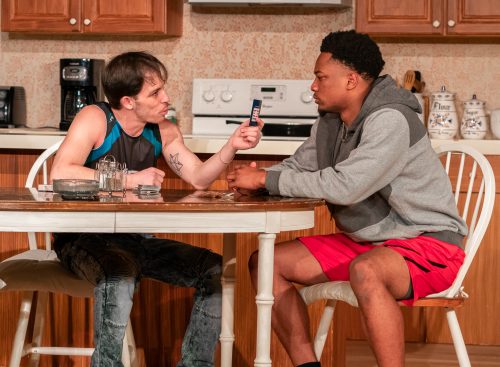 After the two spend time revisiting old arguments and tangling via new ones, an unwelcome blast from the past shows up. Ainsley (Melissa Bibliowicz), Maddox’s high school girlfriend, had dumped him for a drug dealer. Now she’s appeared, high and agitated, trying to sell an authenticated (but likely stolen) Ted Williams baseball bat to Landon so she can come up with bail money for her bad-boy honey Trevor.

Landon and Maddox’s mother remains unseen as she undergoes home dialysis in her upstairs bedroom. But the playwright paints her in enough detail that a vivid portrait emerges. This is a woman who lived hard, was abandoned by both of her sons’ fathers, liked her men and her booze, and played her own part in turning her boys into damaged men.

Part of what McGoldrick is exploring in “Wolf & Badger” is the way some people get mentally stuck, returning over and over to the same thoughts and arguments.  Maddox is trying to make an abrupt change, escaping a world of routine and temptation for an environment that will bring him the discipline and order he craves. Landon can’t break free from his warring impulses toward his brother – one to build Maddox up and help him succeed, the other to keep his little bro mired in chaos.

Playwright and director Nieves conveys respites from the tension through brief interludes when the brothers play cards, look at childhood memorabilia or reminisce about things that made them happy – for Maddox, the breeze of summer, listening to Top 40 hits on the radio, drinking Mountain Dew, popping mini-donuts.

But those moments of calm and warmth are fleeting. And McGoldrick’s choice of deliberately circling back to statements, issues and feelings soon makes “Wolf & Badger” feel less-than-artfully repetitive.

The preponderance of high-tension exchanges doesn’t give the actors much chance to emotionally color their performances, and neither Hoffman nor Lyons has the skill set yet to fully flesh out his character. Hoffman’s Landon is a guy whose bedrock insecurity makes him bluster and rage. Lyons’ Maddox is torn between duty and self-preservation. Those are the straightforward notes the actors play. 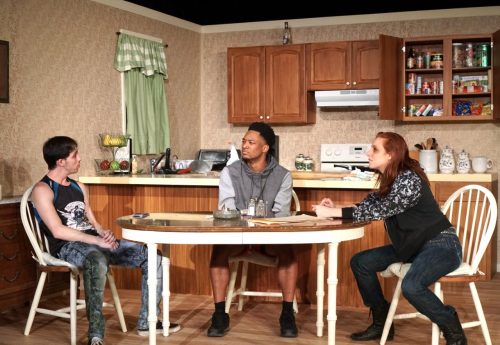 “Wolf & Badger” takes place in a modest home in upstate New York, with the set designed by Amanda Sparhawk and costumes by Angie Esposito. (Photo courtesy of Olimac Media)

Bibliowicz, on the other hand, is fascinating to watch and wholly believable as Ainsley. Lying – to others, to herself – is her default mode. Bibliowicz conveys the vestiges of feeling Ainsley has for Maddox, while making it clear that the woman is mired in self-destructive quicksand.

“Wolf & Badger” plays out in a tidily kept, modest home designed by Amanda Sparhawk. The lighting is also by Sparhawk, with sound by Nieves and costumes by Angie Esposito.

Although “Wolf & Badger” marks the return of in-person performance to the Main Street Playhouse after 16 months of pandemic closure, the company is bringing theater back in two ways: this live production running through Aug. 29 and a streaming version available from July 30 to Sept. 5. Maybe offering that choice will help expand Main Street Players’ audience and get those still wary of gathering in person primed to come back to the theater.

As alluring as the notion of a world premiere is for theaters and audiences, not many new works are problem-free the first time they hit the stage. Script development is a process, with a sometimes-flawed first production a key step in a play’s future life. “Wolf & Badger” contains the seeds of something more powerful and resonant, but that better version hasn’t reached fruition.

WHAT: World premiere of “Wolf & Badger” by Michael John McGoldrick

VIRTUAL VERSION: Available July 30-Sept. 5 for $10; go to Mainstreetplayers.com/tickets and click on “Video On Demand”