Review: With ‘Werther,’ Florida Grand Opera closes its season on a high note 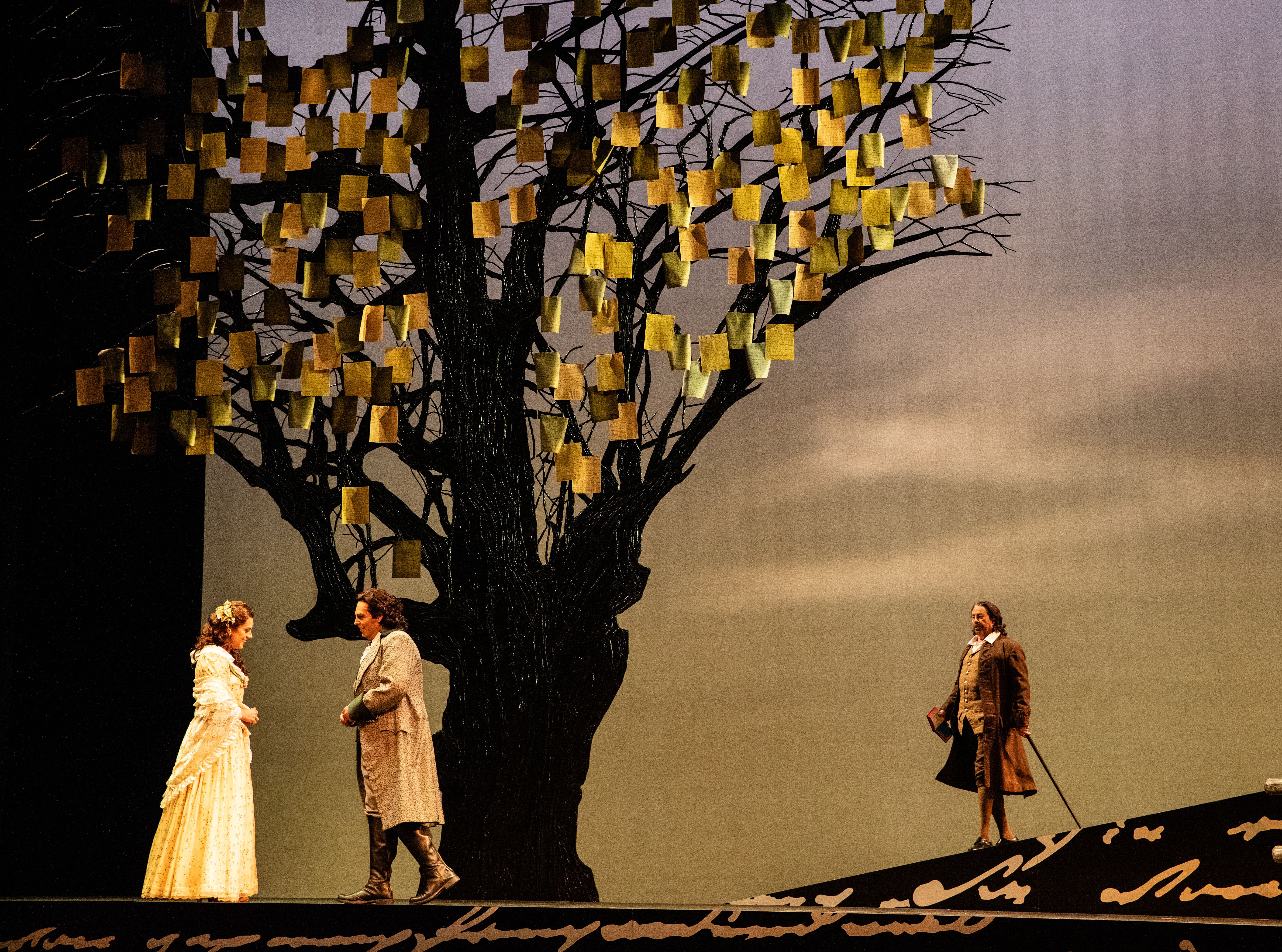 Jules Massenet’s dramatic opera “Werther” is short on action, and its cast of characters limited. It isn’t one of those operas with a large chorus or numerous dueling duets. It also has a simple plot: boy meets girl, but girl is already promised to another.

It does have a reputation, however, of being the most French of French operas, and what has gained the 19th century work this reverence isn’t in its storytelling about the lovelorn poet and the woman he can’t have, but in the music, where moods shift from delicate to desperate, light with strings and woodwinds, then to dark and dynamic with deep brass. “Werther” also has some of the most beautiful arias ever written for a tenor and mezzo-soprano.

The two leads must be performed by singers with the theatrical skill to tackle the roles with vulnerable abandon and the ability to sustain the lengthy solos Massenet demands of them. Florida Grand Opera’s final production of the season finds the flawless pairing with tenor Dimitri Pittas as the lovestruck Werther, and mezzo-soprano Daniela Mack as his beloved, Charlotte. The production is running through May 5 at the Arsht Center in Miami before moving to the Broward Center in Fort Lauderdale.

The lyric opera, which first premiered in 1892, was inspired by Johann Wolfgang von Goethe’s book “The Sorrows of Young Werther,” published in 1774. Massenet’s librettists, Edouard Blau, Paul Milliet and Georges Hartmann, captured the composer’s vision of weaving a four-act opera around the epistolary novel, a series of letters in which the protagonist bares his soul, his love and his tragic longing for Charlotte.

The title character, a poet caught up in the romance of love, is described by two of the townsmen as someone who has an air of melancholy. “Never jolly,” they remark. Pittas finds a way to convey this complication early on, when we don’t yet know what fate awaits him. As Werther becomes overtaken by his love sickness, Pittas displays the sinking decline. His performance is intensely character-driven, his dashing good looks so fitting for the part. His wide-ranging tenor takes full advantage of the big showpiece, the aria in Act III. As Charlotte shows him some of the books he had started to translate for her, a collection of Ossian’s verses, it sparks him to sing, “Pourquoi me reveiller?” (“Why do you awaken me, o breath of spring?”) Pittas shows vocal restraint as Werther tries to hold back his feelings for Charlotte, but then he erupts into bold notes, a fitting intensity for Massenet’s version of a big verismo in the Italian tradition. 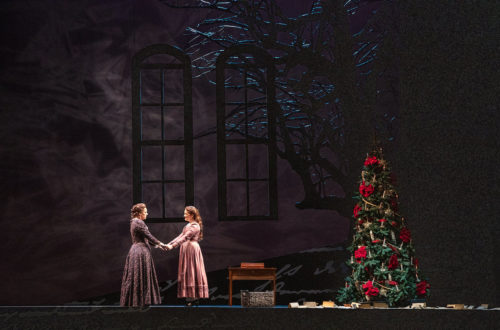 With just as much force, Mack exposes Charlotte’s vulnerabilities through her timbre, her mezzo-soprano matching the tone of Massenet’s orchestral mood, sultry tones rich like silk and black velvet. The third act’s “letter scene” has long been considered one of the greatest opera monologues for a mezzo-soprano. It’s a tour de force. Charlotte, too, has descended into a darker place, and Mack digs deep, her range broad and coming from a fiery, soul-stirring ache. In “Va! Laisse couler mes larmes” (“Go! Let Flow My Tears!),” she sings, “Martèlent le coeur triste et las” (“Hammer the heart sad and weary”).

If there is any Mary Sunshine amidst the gloom, it is Charlotte’s sister Sophie, who sings of her good mood and happiness with the world in “Du gai soleil” (“The Gay Sun”). Besides the two leads, Sophie is the only other character with an aria. She sings, “Tout le monde est joyeux. Le bonheur est dans lair” (“Everyone is joyous. Happiness is in the air.”) Soprano Evan Kardon makes the most of her time in the spotlight, her voice bright and expressive.

As Charlotte and Sophie’s widowed father, the Bailiff, bass baritone Jake Gardner brings a bit of lightness to what can be a stern role. His drinking buddies Schmidt and Johan, played by Dominick Corbacio and Rafael Porto, instill comic relief in the opening of Act II as they climb from behind the risers a little wobbly after a night of indulging. The story doesn’t give much character to Charlotte’s fiancé/husband until a climactic decision that he must make toward the show’s end, but baritone Benjamin Dickerson finds depth through his scenes in an otherwise almost nonessential Albert.

Florida Grand Opera has performed “Werther” three times before, in 1973, in 1982 and in 1996, but this production is new, and a creation from the ground up. While keeping the story firmly planted in the German countryside, the simple, abstract set by Michael Baumgarten is vast but sparse, giving a sense of the emotional loneliness that early on begins to bubble up in the characters. A one-dimensional, overgrown tree is at the center of the set. Letters hang from the branches instead of leaves. In winter, the tree has lost its “leaves,” and the letters are scattered on the ground. 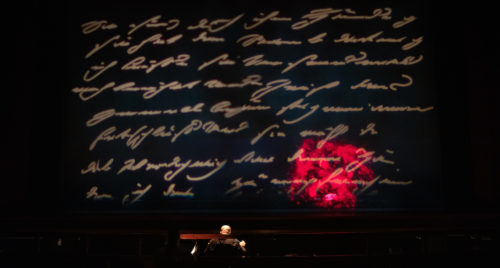 “Werther” is based on Goethe’s epistolary novel “The Sorrows of Young Werther.” Photo courtesy Daniel Azoulay.

The scenic design’s simplicity leaves room for attention to the singers. Sometimes, however, the deep, cavernous set dwarfs the singers. When the action is executed from far upstage, the sound is swallowed up, and the performers seem far from the audience, creating a distance and a feeling of a disconnect.

Thankfully, when the drama becomes more intimate, the playing area is moved downstage. Finally, we feel a sense of closeness with the characters. Lawrence Edelson’s direction aligns with the set as he unfolds the show like the changing of the seasons, from Massenet’s sunny Act 1 to its sorrowful finale.

An astute conductor realizes that Massenet’s music must be as emotive and expressive as the action onstage. Joseph Mechavich brings out the French Romantic’s lilting emphasis on strings and woodwinds in the opening strains and throughout the first act, and pushes his orchestra to full throttle for the tumultuous, dark and dissonant third and fourth acts. Onstage, the tug of war between duty and desire continues to build, while in the orchestra pit, the music heightens the tension.

For an opera to run on all cylinders, all the elements must be in sync, from the direction to the singers and orchestra. Florida Grand Opera’s “Werther” has this and more, down to the letter.