Review: With ‘Memphis,’ Actors’ Playhouse delivers an ode to joy 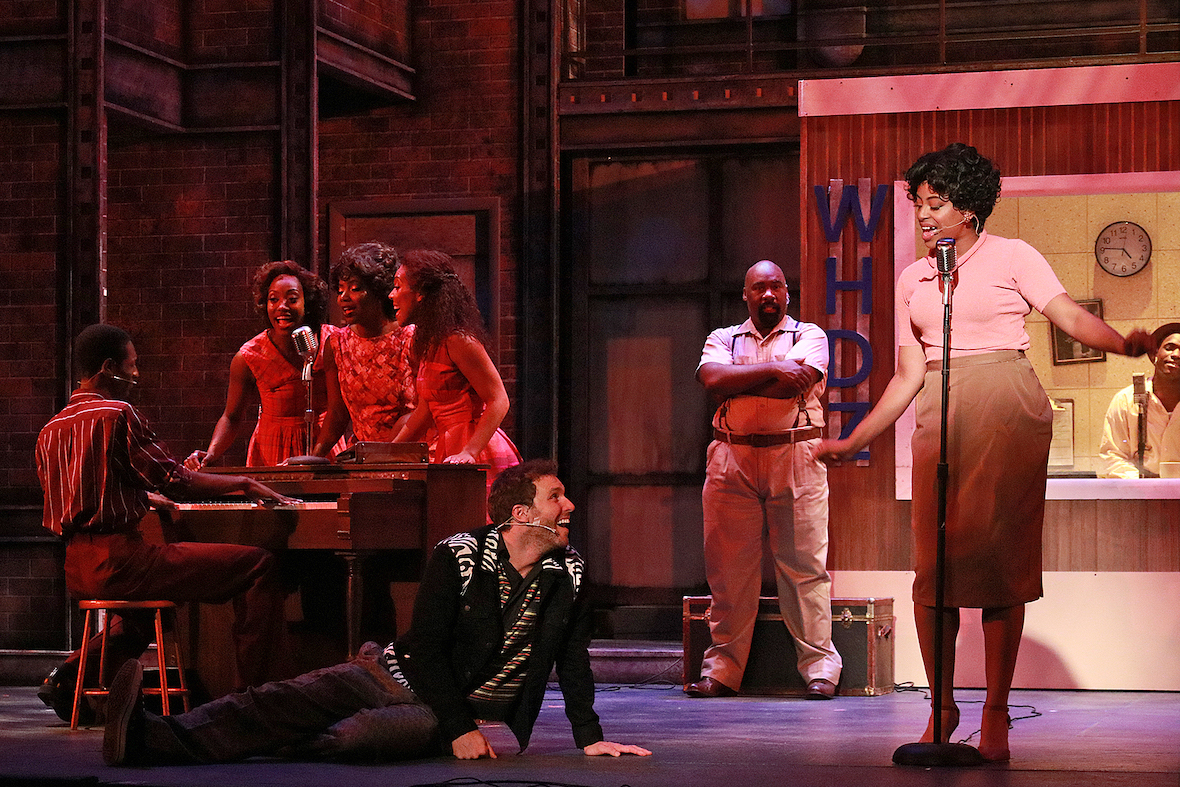 In a 21st century America marked by divisive racial conflict, prejudice and injustice, the Tony Award-winning musical “Memphis” serves as a reminder of how far we’ve come — and how elusive true brotherhood remains.

“Memphis,” which has just opened in a gloriously realized Actors’ Playhouse production at the Miracle Theatre in Coral Gables, is also a joyous ode to the uplifting and unifying power of music. Although the Joe DiPietro-David Bryan show is neither the best nor the worst ever to win the best musical Tony, its 1,165-performance 2009-2012 Broadway run, successful national tour and many regional productions attest to its ability to connect with and move diverse audiences.

Just a year ago, Fort Lauderdale’s Slow Burn Theatre mounted a terrific production of “Memphis,” earning a half-dozen nominations for the region’s Carbonell Awards, which will be presented April 8 on the same Broward Center stage where the company did “Memphis.”

The Actors’ Playhouse production is different yet just as thrilling, an illustration of the way artists infuse a show with their particular talents and distinctive vision in bringing a piece to life. The unseen architects of the first-rate production, which is as cohesively excellent as anything the company has done in many seasons, are director David Arisco, choreographer Ron Hutchins, musical director David Nagy, set designer Tim Bennett, costume designer Ellis Tillman, wig designer Gerard Kelly, lighting designer Eric Nelson, sound/projection designer Shaun Mitchell and set dresser/prop designer Jodi Dellaventura.

Together, the team creates a version of Memphis and Beale Street in the 1950s, when segregated clubs were the norm, “white” radio stations wouldn’t play what was called race music, and a mixed-race romance was dangerous and necessarily secretive.

Inspired by real-life disc jockey Dewey Phillips, who was among the first white DJs to play the music of black artists in the ’50s, “Memphis” tells the story of wild man Huey Calhoun (Eddie Egan), an aspiring DJ who digs the soulful music he hears in the city’s black clubs. When he stumbles down the stairs into Delray’s, the patrons get ready to split, and proprietor Delray Farrell (Chaz Rose) asks Huey to leave, pointing out the obvious: This kooky cat is the only white guy in the place.

But Huey turns things around when he sings “The Music of My Soul” — Egan really is a soulful, charismatic singer — which moves everyone in the club to raise their voices as they move to Hutchins’ exuberant, intricate, expressive choreography.

That night, Huey meets the woman who will change his life, Delray’s sister Felicia (Gabrielle Graham). A powerhouse singer and drop-dead gorgeous woman, Felicia motivates Huey to get more aggressive in pursuing his dreams, if only to make hers come true, too. Deep-voiced Delray, Huey’s openly racist Mama (Margot Moreland) and others object to the unlikely couple’s creative partnership turned romance. Yet together, despite myriad obstacles and one particularly violent reminder of the times, the two soar together toward success — for a time.

DiPietro’s book has its share of clunkers and clichés, but that doesn’t undercut the impact of the score by Bon Jovi keyboard player/Rock and Roll Hall of Fame member Bryan, who co-wrote the lyrics with DiPietro. The show’s music is stylistically varied — with rhythm-and-blues tunes, gospel-inspired numbers, ballads, anthems and more — all of which the Actors’ Playhouse cast makes memorable.

Egan adopts the distinctive, odd accent that most actors playing Huey do, and he plays the show slightly hunched over, as if the ambitious, convention-defying Huey is trying not to draw attention to himself. His on-air meltdown as host of a teen TV dance show during “Tear Down the House” is convincing, and his stirring anthem “Memphis Lives in Me” gets the audience cheering.

Miami native Graham, every inch the star-is-born performer in Tillman’s striking period dresses for Felicia, brings power and gravitas to “Colored Woman,” then demonstrates her vocal versatility on the pop-friendly “Someday.”

The leads are surrounded by impressive talent, each getting a moment (or more) in the spotlight. The deep-voiced Rose, whose protective Delray sees the danger in Huey coming anywhere near Felicia, fights for his sibling as he sings “She’s My Sister,” then later joins Huey’s mother and his friends Bobby (Jerrial T. Young) and Gator (David Berry) in singing a fierce “Change Don’t Come Easy.”

As Mama Calhoun, Moreland deftly navigates the character’s evolution from a woman steeped in prejudice to one whose eyes and heart are beginning to open, and she delivers showstopping work on “Make Me Stronger” and “Change Don’t Come Easy.” Young’s Bobby has a great comedic moment as he transitions from a deer-in-the-headlights reluctant TV performer to a killer singer-dancer on “Big Love.” Berry’s Gator, silent for almost the entirety of the first act, brings the first part of the show to a close with the deeply moving “Say a Prayer.”

Mark Sanders is just right as Mr. Simmons, the radio station owner who places profit over principle, and Conor Walton has a funny turn as a DJ whose lot in life is playing bland tunes by Patti Page and Roy Rogers.

Although the serious themes of “Memphis” are all too resonant in these turbulent times, much of the show — most of it — is a joy-filled celebration of the healing, transformative power of music. Huey’s signature expression is “hockadoo,” a made-up, meaningless word. Yet somehow, it encapsulates all the fun and feeling that this artful production of “Memphis” supplies.