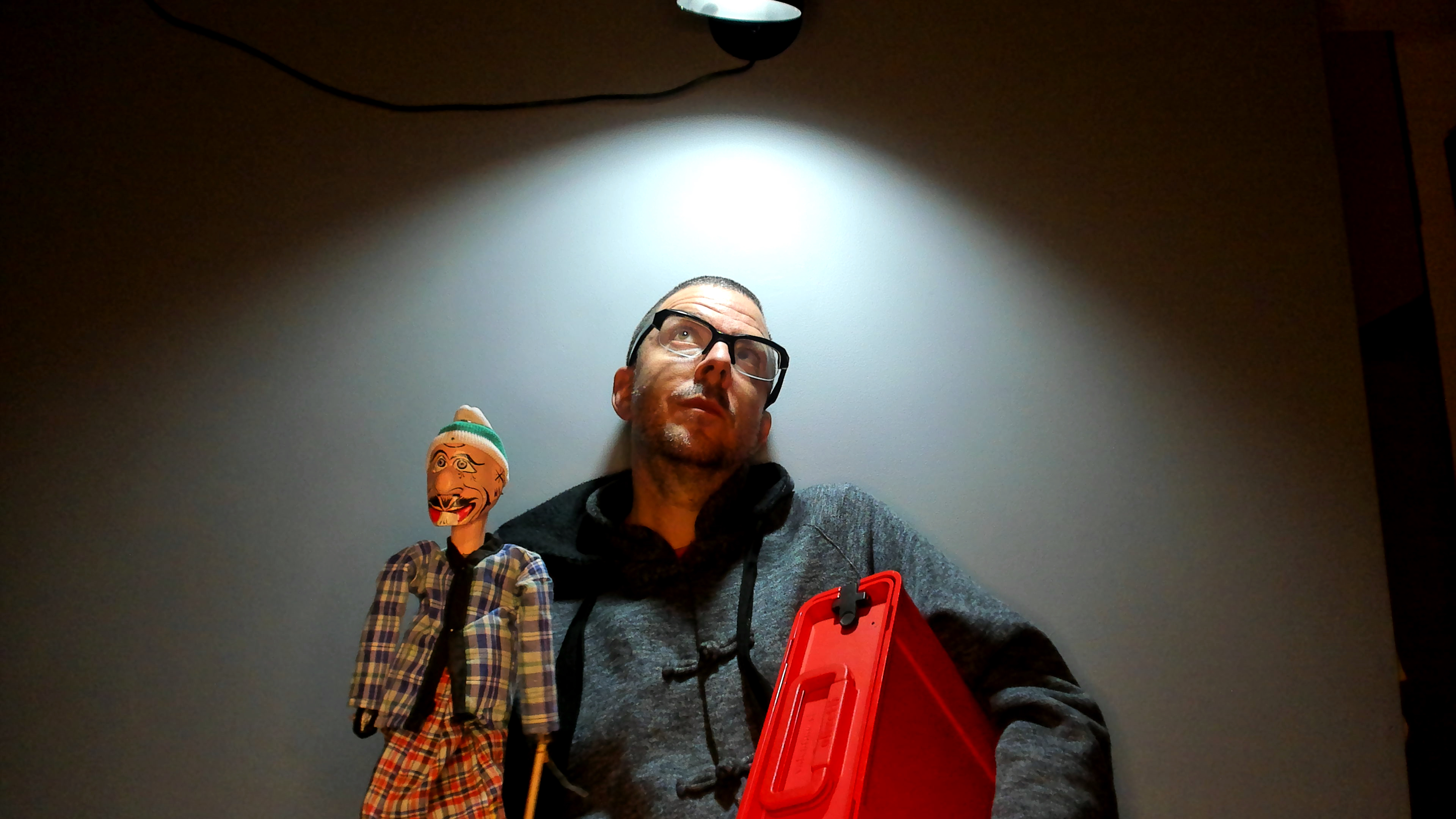 Playwright Thaddeus Phillips has said that his new “Zoo Motel” is about “…our connections in the current disconnection.” Here he’s shown checking into “Zoo Motel,” with a puppet and typewriter in hand. (Photo courtesy of Rafael Esteban Phillips)

Pre-pandemic, Thaddeus Phillips was a man most often in motion, traveling from his Colombian home base near Bogota for directing work in Europe, or performing his own theater pieces throughout the United States and elsewhere.

In February, as he was in Madrid to stage a piece about the climate crisis and pandemics, the world began to shut down, and his scramble to get home included an unexpected but artistically thought-provoking overnight stop in Iceland.

His many 2020 bookings collapsed like falling dominoes, and the peripatetic artist found himself quarantined at home in the Colombian village of Cajica with his wife, director Tatiana Mallarino, and their son.

Though Phillips’ travels have been restricted for more than six months, his creative imagination has continued to roam free. The result: “Zoo Motel,” a livestreamed digital world premiere being presented by his theater collective Lucidity Suitcase Intercontinental and Miami Light Project.

Phillips has worked with Miami Light Project twice before – in 2015 performing his play, “17 Border Crossings,” at The Light Box at Goldman Warehouse, and in 2019 doing a one-performance premiere of his piece, “Inflatable Space,” at Miami Beach’s Colony Theatre.

A multidisciplinary work drawing from theatrical and cinematic traditions, “Zoo Motel” plays with perspective and scale as its Zoom audience watches Phillips moving around his odd, confining motel room.

In a resonant metaphor for this moment in time, the door to the hallway and lobby seems to have vanished, leaving him perplexed and understandably agitated. He appeals to his fellow guests – the occupants of 21 other “rooms,” observing from Miami, Brooklyn, Los Angeles and who knows where – to help him find his way out of isolation.

Phillips has said that “Zoo Motel” is about “…our connections in the current disconnection.” In moments of interactivity, the man in the motel room incorporates magic tricks designed by sleight-of-hand artist Steve Cuiffo, first drawing us into a counting game on the motel’s evacuation map. Later, he uses card tricks to help propel a narrative about his grandfather, Abe Schiller, aka “Mr. Las Vegas,” a late-1950s Flamingo Hotel publicist who favored elaborate cowboy getups and who is pictured smooching a wide-mouthed bass pulled from Lake Mead.

A welcome sheet included in a package emailed to each “guest” in advance highlights several of the meaningful objects in the room. 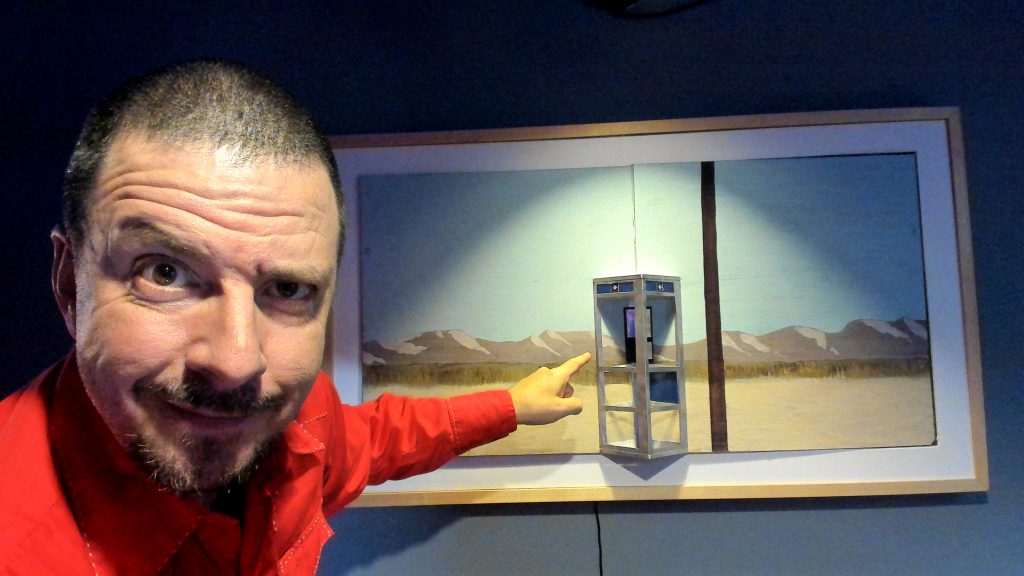 They include the beckoning Maneki Neko cat, a good-luck talisman from the Edo period in Japan; a miniature of the ill-fated Titanic; tiny and larger versions of the 1990s-era Mojave Desert phone booth, called by people from all over the world just to see who would answer; and a small version of the Japanese Otsuchi “wind phone,” a booth with a disconnected phone used by mourners to “talk” to their departed loved ones.

With a central rotating camera capturing his movement, Phillips magically makes the most of his limited space.

Moments after a frustrating conversation with the night clerk, he seems to emerge from the shower, his lower body and head wrapped in towels, moving in for a closeup as he vigorously brushes his teeth. Later, he lies down for a fitful sleep alongside a puppet, his sole companion, only to have the figure move as Phillips continues to slumber. Later still, as we hold a cutout of a car windshield up to our screens to get just the right perspective, we watch a snippet of Dorothy’s tear-filled homecoming from “The Wizard of Oz.”

One facet of “Zoo Motel” is pulled from or inspired by Phillips’ “Inflatable Space.” The Voyager Golden Record, 12-inch gold-plated copper disks placed aboard each of two Voyager spacecraft in 1977, makes an appearance, along with Richard Strauss’ stirring “Also sprach Zarathustra,” music forever linked to Stanley Kubrick’s “2001: A Space Odyssey.”

And that puppet? In a post-performance, question-and-answer session, Phillips shares that it’s the Fool from a puppet version of “King Lear” he once directed.

Even in isolation, even for a solo show, the collaborative nature of theater and film requires a village of artists. Phillips’ “Zoo Motel” team includes Mallarino as director; the New York-based Cuiffo as the deviser of magic tricks; and two Philadelphia-based members: Steven Dufala as designer and actor Newton Buchanan playing the role of the Night Clerk.

Set to stream through Oct. 25, the hourlong “Zoo Motel” is a work with a disjointed narrative thread that nonetheless produces abundant emotional responses.

Phillips opens a book titled, “Theatre Projects 2020,” and displays one page after another of sketches with a large red “X” communicating their cancellation. Drawings of ghost lights in the places where he was to have performed are haunting, underscoring one kind of loss among the myriad ones the world has experienced during the pandemic.

Zoom theater is, we now know, its own animal. Phillips mutes and unmutes audience microphones, which sometimes injects family chats into the show, and individual cameras reveal people drinking, chowing down and moving around as they watch, as though they were catching a movie on Netflix. Focus, people, focus.

Still, the challenge of this elongated halt to in-person performances has spurred artistic invention, as Phillips and his collaborators demonstrate. Check into “Zoo Motel” to explore some of those possibilities.

WHAT: “Zoo Motel” by Thaddeus Phillips.