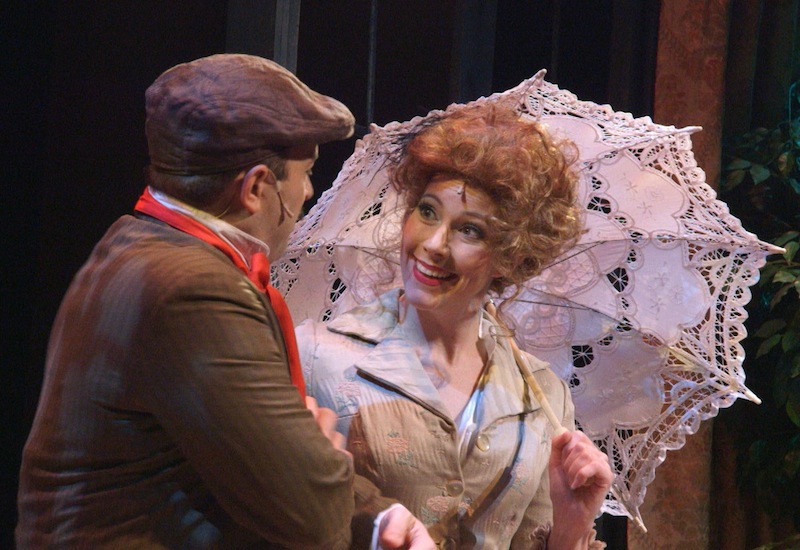 The creators of the double-your-pleasure musical Romance/Romance understand that love is rarely a plain-and-simple affair.

Among the aspects of love that composer Keith Herrmann and lyricist-book writer Barry Harman explore in their paired one-act musicals are passion, jealousy, deception, faithfulness, risk, the rush of new love and the compromises that make love endure.

Slow Burn Theatre has just opened its new production of the intimate 1988 Broadway musical in the Broward Center’s Abdo New River Room, where it will run through March 6 before moving to the Aventura Arts & Cultural Center March 10-13. The show is a small-scale gem, with the same shining quartet of actor-singers exploring two stylistically different love stories set in different eras.

The first musical, The Little Comedy, is based on an Arthur Schnitzler short story. Set in Vienna near the end of the 19th century, the piece focuses on Josephine (Laura Hodos) and Alfred (Matthew Korinko), two attractive members of the upper class who happen to be utterly bored with their love lives.

As an experiment, each adopts a disguise – he as a struggling poet, she as a seamstress – and it’s then that they meet. Blossoming love brings with it new problems. She wants to read his non-existent poetry. He wonders why she doesn’t have to show up for work. Both believe that once the truth is revealed, the class-inappropriate affair will of course have to end.

Actors Mike Westrich and Leah Sessa appear in The Little Comedy in brief minor roles and as dancing masked figures, but the first piece belongs to the deceptive duo. Director-choreographer Patrick Fitzwater, Korinko and Hodos establish precisely the right tone throughout, delivering the comedy, honoring the musical’s wry and witty veneer as even as the characters reveal their longing for something real.

During intermission, the set gets a simple transformation – period furniture gives way to a contemporary sofa – to create the world of Summer Share. Based on Jules Renard’s Le pain de ménage, this musical brings together two couples in a Hamptons summer rental. Sam (Korinko) is married to Barb (Sessa), Lenny (Westrich) to Monica (Hodos). But Sam and Monica also happen to be best friends, and an undercurrent of flirty tension is threatening to cut through carefully maintained boundaries. Will desire trump domesticity? That’s the complicated question.

As the potentially betrayed spouses, Westrich and Sessa have a greater presence in the second piece, and in addition to solos and duets, the blend when all four actors are singing together is excellent. Musical director Emmanuel Schvartzman is among the best in the biz in South Florida (the tracks he created for the show are first-rate), and here he’s working with four of the region’s best voices, so it’s no wonder Romance/Romance is such a pleasure to listen to.

Sound designer Rich Szczublewski and lighting designer Lance Blank more than meet the challenges of transforming the Abdo, a banquet room, into a viable theater space. And Slow Burn’s prolific costume designer Rick Peña comes through again, particularly with a pair of stunning gowns (one black with gold accents, the other red with black trim) for Hodos in The Little Comedy.

A single song from the score, It’s Not Too Late, is used in both parts of the show, though the arrangement is altered for Summer Share. So audiences get a two-for-one experience with Romance/Romance, a period musical and a contemporary one. And yet again, Fitzwater and his collaborators demonstrate that all kinds of musicals, not just the large-scale Broadway hits, are in Slow Burn’s wheelhouse.