Review ‘The Golem of Havana:’ A Good Fit For Diverse Miami 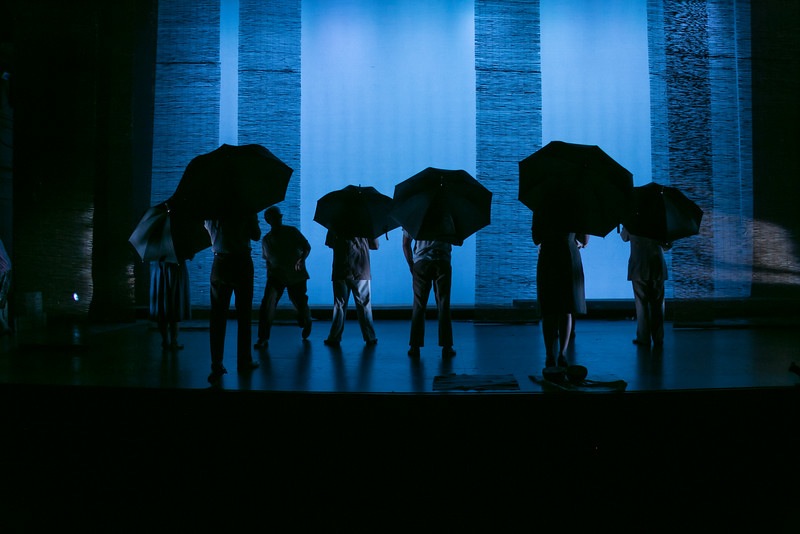 When trials and fears beset our lives, we humans find myriad ways to cope: concocting myths and legends, sending entreaties to God or the gods, letting our subconscious do the talking in nightmares.

The characters in The Golem of Havana, the absorbing and theatrically savvy debut production from Miami New Drama, experience all of the above as Cuba descends into revolutionary chaos in 1958.

Artistic director Michel Hausmann, who co-founded Miami New Drama with acclaimed director-playwright Moisés Kaufman, is aiming to create a dynamic multicultural company for a city described as “an electric dream of art, language, color, class, sabor.” With The Golem of Havana, running at Miami Beach’s Colony Theatre through Feb. 7, Hausmann is impressively on his way.

Previously done at New York’s La MaMa E.T.C. in 2013 and Barrington Stage Company in 2014, The Golem of Havana is a musical that deftly, meaningfully blends Jewish and Cuban cultural traditions in a harrowing story that also takes time, however briefly, for comedy and romance.

With a book by Hausmann, music by Salomon Lerner and lyrics by Len Schiff, Golem centers on the Frankels, a Hungarian Jewish family who resettled in Havana after the horrors of World War II. Daughter Rebecca Frankel (Liba Vaynberg) is an aspiring writer-artist who also serves as the show’s narrator.

At the top of the show, with staging that uses shadow puppetry techniques on sheets illuminated from behind, Rebecca relates the legend of the ancient Golem of Prague, explaining that Rabbi Loew created a clay figure that came to life to protect his congregation from persecution — which worked, until the monster turned violently against them.

Haunting, simple klezmer-style music underscores Rebecca’s words, until she shifts the action to 1958 Havana, the sheets fall away, and the 11-member cast serves up warmth and excitement as they sing and dance Ray Sullivan’s choreography to the show’s son Cubano title song.

With revolution brewing, Rebecca’s parents are eking out an economically insecure life in Havana. Father Pinchas (Allen Lewis Rickman) is a fine tailor, as was his father in Hungary, but he has been frustrated in his attempts to set up a proper shop. Mother Yutka (Yelena Shmulenson) is a dour Holocaust survivor, a woman plagued by guilt-drenched nightmares over a betrayal that led to her sister Olga’s death. In search of herself, dreamy Rebecca has written and illustrated a little book titled The Golem of Havana, finding in her city’s ominous unrest the need for a magical protector.

The family’s maid Maria Rondon (Rheaume Crenshaw), the descendant of slaves, has her own worries. Her son Teo (Ronald Alexander Peet) has joined Fidel Castro’s rebel forces, and every waking moment she fears that, like his innocent father, he’ll be killed by President Fulgencio Batista’s soldiers.

The change agent for the Frankels, a man who brings a golem-like pendulum of good and evil into their lives, is Arturo Perez (Chaz Mena). Described as an “adviser to the military,” he’s actually a charismatic, manipulative Batista thug.

In directing The Golem of Havana, Hausmann utilizes simple, imaginatively theatrical staging. When they’re not involved in a scene, the actors sit on either side of the playing area, observing the action, sprinting on and off with props or pieces of furniture. Key sound effects — the static of an uncooperative radio, the “whoosh” of wind and water, ominous knocking on a door — are created in plain sight by the actors.

The performers, a mixture of New York-based talent from earlier incarnations of The Golem of Havana and Miamians new to the piece, are fine actor-singers who bring the Lerner-Schiff songs to vibrant life accompanied by a six-piece band led by Lerner as pianist and conductor. Among the most memorable musical moments are Yemayá, in which Rebecca and Teo kneel by a strip of ocean to ask the orisha goddess for help, and The Needle and Thread, a duet for Pinchas and President Batista (Felipe Gorostiza) that begins in bright comedy and ends in casual cruelty.

Though Vaynberg doesn’t have a powerhouse voice, her slender, smart Rebecca is a compelling narrator and character. Rickman brings warmth and a light touch to Pinchas, Shmulenson a tense strength to Yutka. As mother and son, Crenshaw and Peet have glorious voices, and both deliver intense performances as the revolution changes their characters’ fates. Mena, who has the largest role of the company’s Miami-based actors, crafts a cocky Arturo who smiles seductively and strikes like a snake.

Though it isn’t a grand, timeless achievement on the order of Fiddler on the Roof, The Golem of Havana is a musical that will resonate strongly — quite strongly — with South Florida audiences. That’s exactly the sort of theatrical fare that the more-than-promising Miami New Drama aims to provide.