Review: ‘The Cubans’ marks debut of playwright with a voice worth experiencing 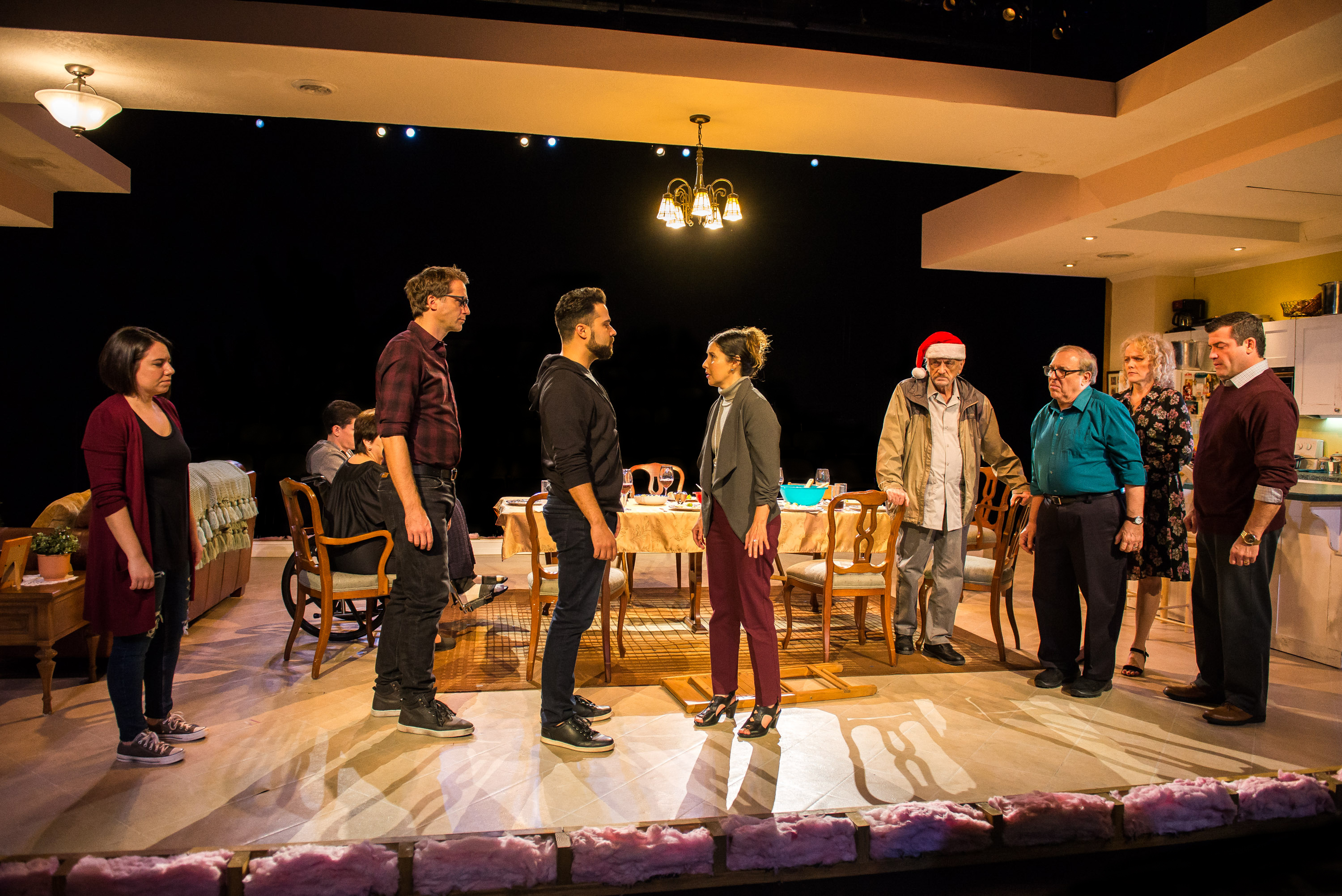 A New York-based actor who grew up in Miami and graduated from Florida International University, Leon has said he wrote “The Cubans” in part because he didn’t see his community and culture represented in the complex family plays that spoke to him so powerfully.

Now, his first produced play is adding a Cuban/Cuban-American “sabor” (flavor) to the genre, a point of view that is deeply specific yet universally resonant in its exploration of intergenerational conflict and the challenges that test us as we move through life.

Working with director Victoria Collado, who earlier staged Vanessa Garcia’s long-running hit play “The Amparo Experience,” Leon lets the audience eavesdrop on members of an extended Cuban-American family and their friends – first as they gather in Westchester for a celebratory meal, then during a fraught “Nochebuena” (Christmas Eve) dinner.

We meet Martica (Vivian Ruiz), the family’s matriarch, as she’s cooking pork and “frijoles negros” (black beans) for a get-together celebrating son Mati’s graduation from the University of Florida.

Daughter Christy (Ashley Alvarez), who has spent the past nine years in New York struggling to get her acting career off the ground, has come home for the party – and, concurrent with the cooking, mother and daughter continue their long-running battle over Christy’s life choices.

Patriarch Jesus (James Puig), who adores his daughter, is a man forever in motion, unsuccessful at playing peacemaker but clearly in love with the strong woman who is his wife. 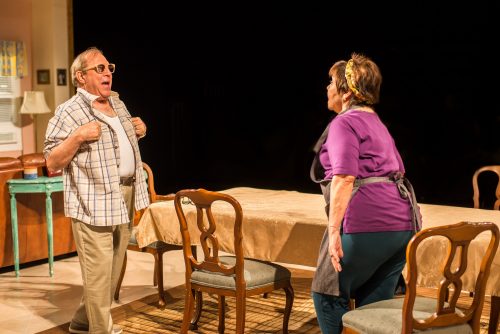 James Puig as Jesus and Vivian Ruiz as Martica share a playful moment in Michael Leon’s “The Cubans.” (Photo courtesy of Justin Namon)

As in life, the conversation in the first act ranges from the mundane to the profound, with Leon’s characters revealing their beliefs and very natures. For the members of the older generation, the aching loss of life as they knew it in Cuba is omnipresent; as Martica says to Christy, “We had to build this new life over the ruins of our grief.”

Born in Miami, the younger family members struggle to break free of parental expectations, determined to carve out their own lives. For Christy, that means living elsewhere, focusing on career, putting marriage and family on hold, maybe permanently. For Ramoncito, it means living an authentic life, though coming clean with his father about his sexual orientation has led to their estrangement.

For all the serious issues underpinning the first act, much of it is buoyantly funny, thanks to Leon’s writing, Collado’s deft way of balancing tone, and the actors’ considerable skill. One particularly priceless moment happens when a clueless Eric says, “You guys must be thrilled about the lifting of the embargo.” The statement goes over like a lead balloon or something unspeakable being dropped in the proverbial punch bowl.

Because of a life-altering event that happens at the end of the first act, the second is far more somber in tone, a shift that is even reflected in the palette of Caroline Spitzer’s costumes. The metaphors grow heavier and more vividly expressed. As a rainstorm pounds, the old Westchester house is literally falling apart.

Further change is on the horizon, and an openly mournful Martica can’t bear it: “I’m stuck. Stuck in a cycle of saying goodbyes, finding my footing, pushing forward, forgetting the past to just have my world demolished again. I’m tired. So tired of this endless tumble towards nowhere. I have to make it stop. I won’t, I can’t say goodbye again.”

New play development is never easy, and as impressive as Miami New Drama’s production is in many regards, some elements don’t yet work as they’re intended.

As with some of its past productions, the company is utilizing its space at the Colony in a fresh way. Carbonell Award-winning set designers Christopher and Justin Swader have created a living-dining-kitchen area that lies between some onstage seating and the regular audience chamber – a traverse arrangement that puts the actors between the two sections of theatergoers, who then watch each other watching the play.

Collado and the performers therefore must be mindful moment to moment of actors not turning away from one section of the audience when key lines are delivered, creating an extra level of challenge in the staging and in the work by sound designer Abigail Nover and lighting designer Yuki Nakase Link.

The set itself, a tidy space with tile floors and lived-in details (props are by Jameelah Bailey), is another metaphor. In the second act, it transforms in a way that symbolizes what is happening to the family. Very dramatic, except that Nover (at least by opening night) couldn’t always overcome the difficulties of balancing sound effects and certain significant speeches by some actors. 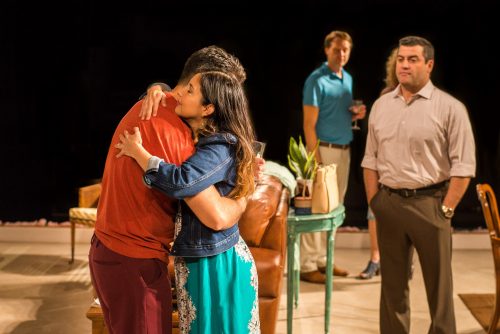 Incorporating script changes throughout the rehearsal process, which comes with the territory in world premieres, the actors have brought a stage full of memorable characters to life.

Alvarez’s Christy is a dynamo, a young woman who curses too much for her mother’s taste, a restless 30-year-old who speaks English the way the older generation speaks Spanish – “rapidamente” (rapidly). Her hurt at the ongoing disconnect with Martica, her sense of her mother’s perpetual disapproval, is palpable.

Ruiz convincingly journeys from in-charge matriarch to a woman mourning yet more change. Her explosive second-act reckoning with her hurting husband is potentially among the play’s most powerful moments, but likely because of the extent of her lines and changes in the text, she’s still struggling in certain speeches.

Puig’s Jesus is strong, loving, a family leader who knows when to defer to his wife. Granado’s Pepe is the macho Latino male – bombastic, controlling, opinionated – while Gaviria as his wife, Vero, is warmer, more conciliatory. Rabasa is touching as the elderly Manolo, struggling to cope with the loss of home, memory and the world as it used to be, though the actor is sometimes quite hard to hear.

Montero is spot-on as the free-spirited Ana, while Scott gives two impressively differentiated performances as Ana’s ill-suited boyfriend and Ramoncito’s significant other, Anthony. Speaking of Ramoncito, Mendez is mesmerizing as a man who is fighting just as hard as Christy to live in his truth.  The scene in which the cousins reunite, share secrets and have a dance is one of the loveliest moments in the play.

Though the play and production are still coalescing, “The Cubans” marks the debut of a playwright with a voice worth experiencing. Leon’s story speaks, with affection and understanding, to anyone determined to find or return to the comforting embrace of home in an ever-changing world.

What: Miami New Drama production of “The Cubans” by Michael Leon