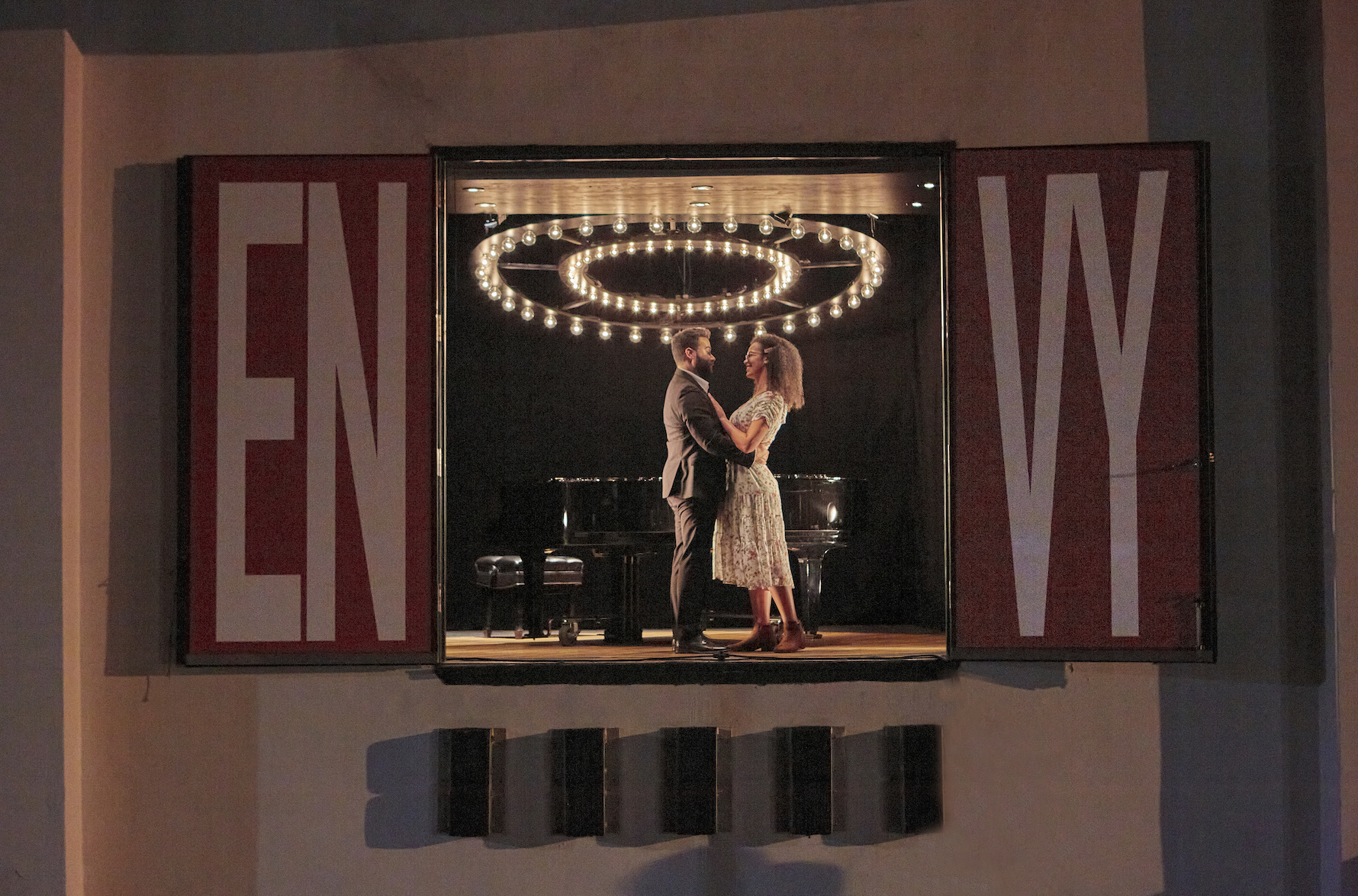 In the early days of the pandemic, when theater came to a sudden halt and artists turned to digital alternatives, Miami New Drama artistic director Michel Hausmann began dreaming of a way to get actors and audiences together again for a safe, live dramatic experience.

“Seven Deadly Sins” is the months-in-the-making fruition of that dream. Performed mainly in storefronts along the 1100 block of Miami Beach’s Lincoln Road, the production has twin objectives: to offer provocative new short plays from seven nationally notable playwrights, and to provide a safety-conscious evening unlike anything available in the virtual arts world.

Miami New Drama has succeeded on both counts. 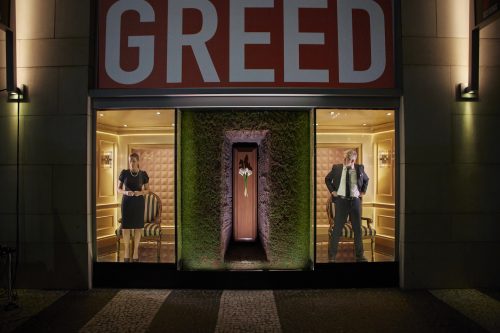 Mia Matthews and Gerald McCullouch are sparring siblings in “All I Want Is Everything!” (Photo courtesy of Ernesto Sempoll)

After undergoing a temperature check and picking up wristbands at the Colony Theatre box office, theatergoers head west across Lenox Avenue to a pop-up, open-air bar called Purgatory, at the center of the 1100 block.

There, under the stars, with celestial white lights, devilish red ones and burning tiki torches decorating the space, singer Kareema Khouri and keyboard player/musical director Wilkie Ferguson kick things off with theme-appropriate numbers such as “Sinner Man” and “Fever.” The passion driving her singing and his playing underscores the joy of performers and audiences reunited.

The color-coded wristbands divide the audience into small groups, and each one has a guide who remains throughout the evening, distributing complimentary earbuds, explaining how to connect to the wireless receiver at each red chair or stool, holding up a QR code theatergoers can scan for a virtual program.

Hausmann has staged five of the seven plays, with Moisés Kaufman directing his own “All I Want Is Everything!” and Jade King Carroll staging Dael Orlandersmith’s “Memories in the Blood.” 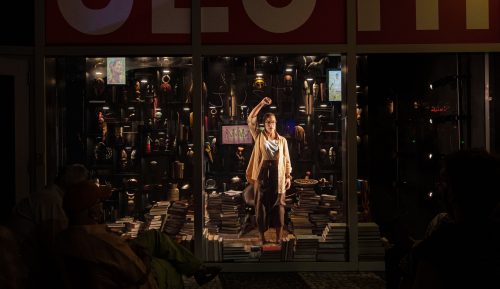 Sandi Stock plays a professor who adopts a persona at odds with reality in Aurin Squire’s “Blackfish.” (Photo courtesy of Ernesto Sempoll)

Six of the pieces are performed inside glass-box storefronts (the seventh is nestled just inside the Colony, at its loading dock), and the playing areas feature vastly different set designs by Carbonell Award-winning brothers Christopher and Justin Swader.

Sound designer Matt Corey has devised the actor-audience aural connection, conjuring the sounds of protests and pianos and more; and lighting designer Yuki Nakase Link uses a palette that ranges from tasteful elegance to the flash of cameras as they expose the inconvenient truth of a woman’s life. Costume designer Marina Pareja nails each play’s aesthetic, from the expensive mourning attire of soon-to-be-warring siblings to an Amsterdam sex worker’s “uniform” of black lingerie, torn fishnet stockings and dominatrix-worthy heels.

Although each play is built around one of the seven deadly sins – envy, greed, gluttony, lust, pride, sloth and wrath – the dramas-in-miniature are as eclectic as their authors. Conflict drives them all, whether the born-of-a-plague play is a two-hander or a solo show, whether the combatants are ex-lovers with unresolved feelings or a former president thirsty for a return to power.

The latter is not the current occupant of the White House, though Donald J. Trump does figure into Rogelio Martinez’s “Itsy Bitsy Spider,” the play about gluttony. Gregg Weiner gives a captivatingly droll performance as a late ’80s Richard M. Nixon, a man ravenous for a return to the Oval Office. 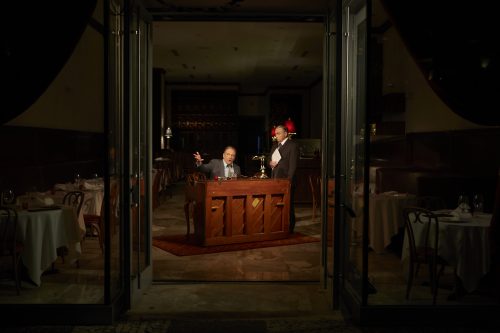 Downing whiskey and puttering at the piano in an empty restaurant, an unrepentant and uncensored Nixon puts every disturbing facet of his character on display as he fusses at his new British assistant, Nigel (the bemusing, sly Christopher Renshaw).

Next door is director-playwright Kaufman’s “All I Want Is Everything!,” a study of filial ingratitude. Immediately after their wealthy father’s burial, Leo (Gerald McCullouch) asks his grieving sister, Vivienne (Mia Matthews), if they can go tout de suite to see the attorney handling the estate – Leo being a guy who has long lived far beyond his means in greedy anticipation of this spectacular payday.

But chic Vivienne, who literally and emotionally cared for their father, has expectation-upending news. Strikingly, this conflict plays out as the siblings stand in elegant spaces on either side of a vertical casket adorned with Calla lilies.

Playwright and actor Carmen Peláez is involved in “Seven Deadly Sins” as the writer of one play and the performer in another. In her play, “Strapped,” the statue of former Vice President John C. Calhoun (Stephen G. Anthony) has been pulled from its towering pedestal in Charleston, S.C., amid Black Lives Matter protests. The three-dimensional representation of the pro-slavery Calhoun, whose tenure in the nation’s second-highest office was three decades before the Civil War, is miraculously able to address us. Proud and not even the tiniest bit ashamed of his past, he turns on the Southern charm before giving full voice to his vile views. 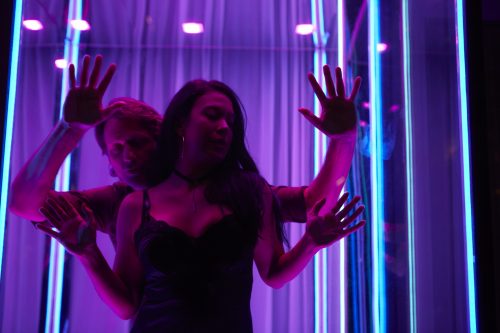 As an actor, Peláez gives a very physically still, emotionally intense performance in Orlandersmith’s “Memories in the Blood,” a play about wrath, rage, whatever you want to call the simmering anger that’s always ready to boil over. Largely confined to her apartment during the pandemic, a nameless woman speaks about interactions during her fleeting forays into the outside world. But more viscerally, she’s dealing with old slights and unhealed wounds made freshly raw by her isolation.

In Aurin Squire’s “Blackfish,” an artist and African-American culture professor named Regina (Sandi Stock) is being profiled by an unseen reporter (Roderick Randle). The journalist is having a tough time connecting with people who knew this proud, spotlight-loving Black woman back in the day, and as the story unravels, even the voice of God (Kareema Khouri) wades into the issue of cultural appropriation – and the real meaning of sloth.

Hilary Bettis explores envy in “Andre and Erica,” a piece about former lovers who happen to be superb pianists. Andre (Andhy Mendez) is nervously practicing Beethoven’s Sonata No. 14 “Moonlight” before his Carnegie Hall debut when his ex, Erica (Renata Eastlick), pops in. Mendez and Eastlick convey the couple’s chemistry and unfinished emotional business, but after Erica sits at the piano and demonstrates her undiminished talent, the reasons for their split become clear.

Lust is the subject of Pulitzer Prize-winner Nilo Cruz’s “Amsterdam Latitudes,” the richest and most highly theatrical of the plays. Ludmila (Jessica Farr) is shimmying and shaking what her mama gave her in a booth in Amsterdam’s Red Light District. It’s a last call for sin, as the pandemic is about to shut the city down. A tormented man named Mirian (Caleb Scott) shows up seeking connection, with and through Ludmila, to his lost life and the figures who haunt him. The play and the performances are visceral, aching, poetic.

As much as theater lovers and artists long to return to performances for large audiences inside traditional spaces, that moment is not yet here. “Seven Deadly Sins” is one creative bridge between nothing and normalcy, a safe and imaginative reminder of live theater’s undiminished power.

COST: $60 and $75; purchase tickets at Miaminewdrama.org/7deadlysins