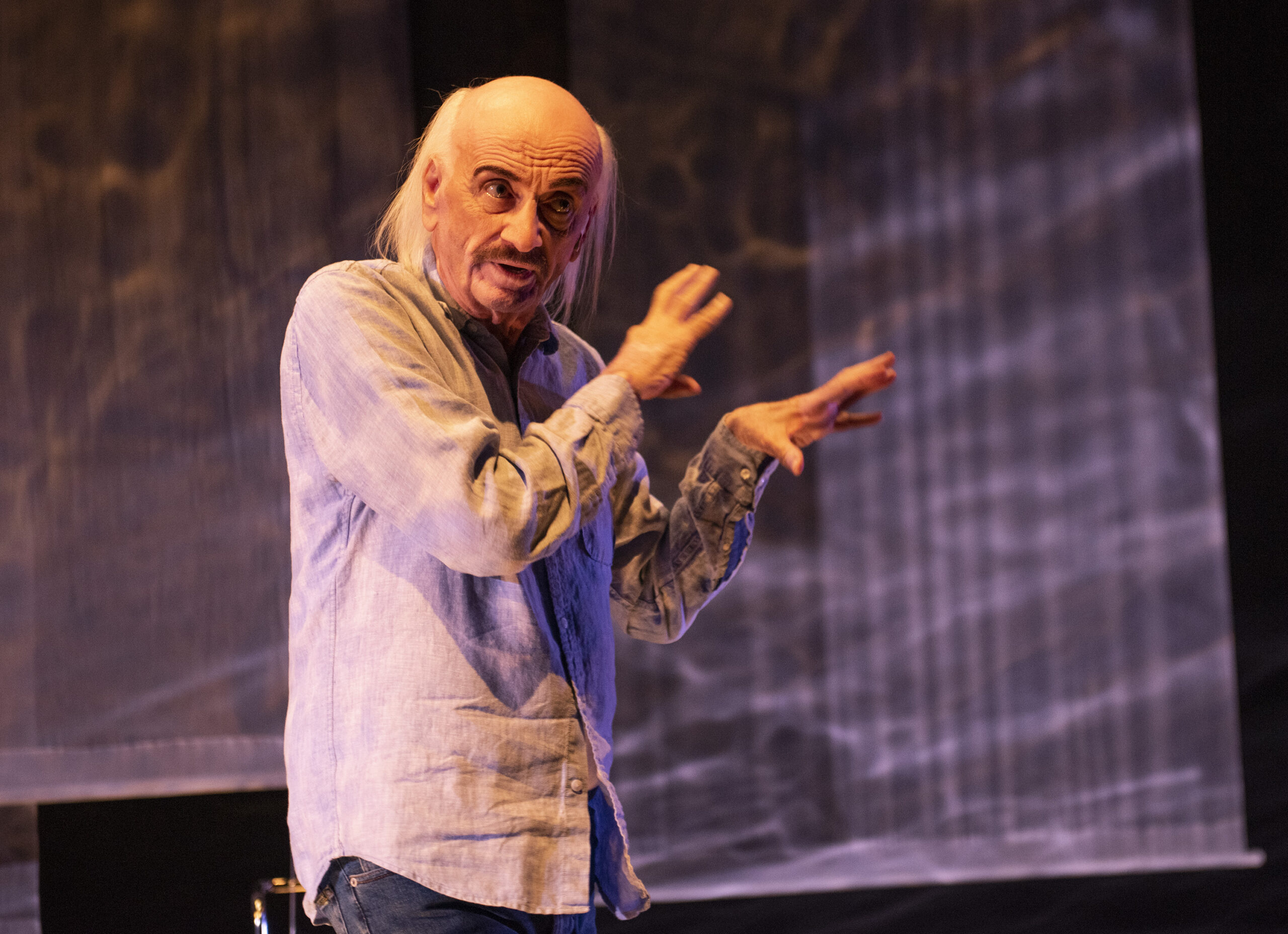 Ruben Rabasa stars in “Rubenology: The Making of an American Legend” at Gablestage through July 31 at the theater inside the Biltmore Hotel.  (Photo courtesy of Magnus Stark)

Actor Ruben Rabasa is 84 years old, and he’s not one of those performers who tries to hide his age to keep his casting options open.

He mentions it right off the top in the GableStage world premiere of “Rubenology: The Making of an American Legend,” just after he has emerged from the wings wearing a gold sequined bomber jacket and dancing enthusiastically to “Hot, Hot, Hot.”  Rabasa comes off as being much younger, but that’s not the point: This is a man ready to share stories from decades of showbiz/life experience and wisdom from his ageless soul.  That’s a potent combination. 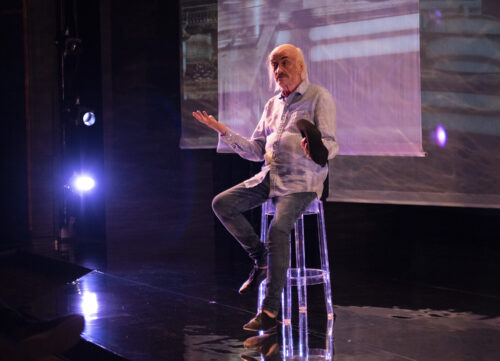 In “Rubenology: The Making of an American Legend” at Gablestage, Ruben Rabasa shares personal stories of his life and career along with wisdom from his ageless soul.  (Photo courtesy of Magnus Stark)

“Rubenology” is a collaboration between GableStage and the Abre Camino Collective, the self-described “storytelling studio” run by playwright Vanessa Garcia and director Victoria Collado.  Garcia wrote the script in English based on extensive interviews with Rabasa in Spanish (both are credited), and Collado shaped and staged the play, remaking it in several significant ways during rehearsals, according to the director.

In content, “Rubenology” is many things. First and foremost, it’s a celebration of a performer who emigrated with his mom and younger brother from Havana to New York in 1955 at the age of 17.  The play also examines the joys and frustrations of being a multicultural artist, how Rabasa’s Cuban roots suffuse just about everything in his American experience, and how the deepest of bonds transcend death.

Not that “Rubenology” is a somber solo show. Far from it.  Like its ageless philosopher-performer, the play is funny and whimsical, brimming with warmth, yet deeply emotional when it should be.

Because he has been in more than 70 movies and television shows in addition to his work in theater, Rabasa’s is a familiar face, especially to the Spanish-speaking contingent in the audience. When you enter the theater, you see projected images of him – as a little boy beside his mother in Cuba, as a handsome young man, a goofy character in a wig, an older gent with a mostly bald head and a long fringe of wispy white hair. 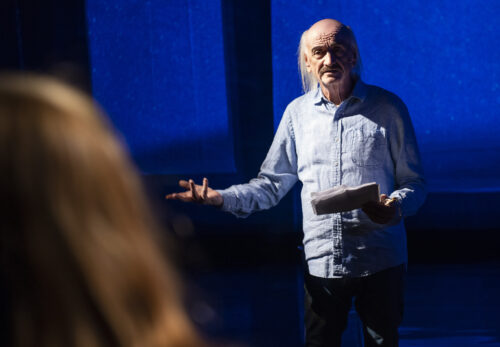 Ruben Rabasa turns serious as he talks about the loss of his mother in the world premiere of “Rubenology” at GableStage. (Photo courtesy of Magnus Stark)

An experienced standup comedian as well as an actor, Rabasa makes connecting with the audience look easy.  By the time he emerges from behind those projected portraits, the whole crowd is ready to stand up and clap (or wiggle) along to “Hot, Hot, Hot.”  Later, he spies someone he thinks he knows in the audience and begins a little exchange – one that will pay off near the end as he muses about legacy, resilience and connection.  Another audience member, chosen because he or she is bilingual, translates a short Spanish passage into English.

Several times, Rabasa refers to things coming in threes, everything from the ingredients of a Cuban pan con timba (bread, cheese, guayaba) to the frightening options for dealing with his nonagenarian mother’s last illness (surgery, hospice, and a tube down her throat).

“Rubenology” is also organized into three sections, the first about his crazy experiences as a teen busboy (who spoke zero English) in wintery New York in the mid 1950s; the second about his dealings with a santero (birds were involved) as he tried to take his career to the next level; the third about the eccentricities of his beloved tell-it-like-it-is mother, along with his devastation at her passing.

Here and there, Rabasa has storytelling help from Mimi (Marialexia Hernandez, the show’s assistant stage manager), who takes the stage briefly to bring him coffee, read a few of his lines when he’s offstage or jolt him from a lost-in-thought space into his last story.  Their interactions sometimes sweet, sometimes faux combative, but the vibe between these artists of very different generations is charmingly affectionate. 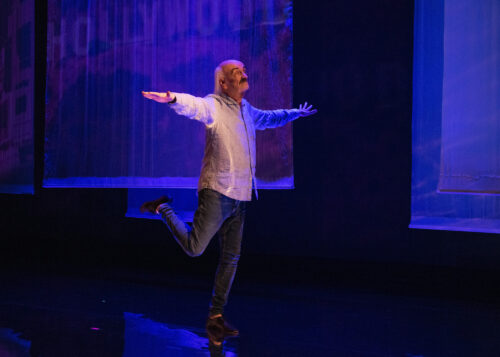 An experienced standup comedian as well as an actor, Ruben Rabasa makes connecting with the audience look easy. (Photo courtesy of Magnus Stark)

“Rubenology” isn’t a show that requires spectacle to tell the story of a life.  Set and lighting designer Frank J. Oliva, projection designer Joel Zishuk, sound designer Brandye Bias and costume designer Nobarte go for simplicity, the better to make a show that Rabasa can easily take on the road at some point.

Right now, the piece is still evolving as speeches get tweaked and the actor settles in.  On opening night, the hat that’s a key to telling his first story didn’t function as it should have so Rabasa had to keep adjusting it.  When he’s speaking English (as he is 99 percent of the time), his Cuban-Spanish accent is strong, so he needs to be mindful of clarity.  There are sporadic f-bombs in the script, which are unnecessary.

Most movingly, “Rubenology” doesn’t consider only the breadth of an impressive career.  The play also demonstrates Rabasa’s range as an actor.  As he reads his account of ongoing guilt over his mother’s death, tears well in his eyes.  His voice catches.  This is not the funny guy who so easily makes people laugh. This is an 84-year-old missing his mother.

As we move from the autumn to the winter of life, it’s natural to look back, to consider what we did or didn’t do, to ponder what our legacy might be.  Thanks to Abre Camino and GableStage, that process – so full of warmth and sincere feeling in Rabasa’s case – has been captured and made ready for sharing in “Rubenology.

WHAT: “Rubenology: The Making of an American Legend” by Vanessa Garcia and Ruben Rabasa