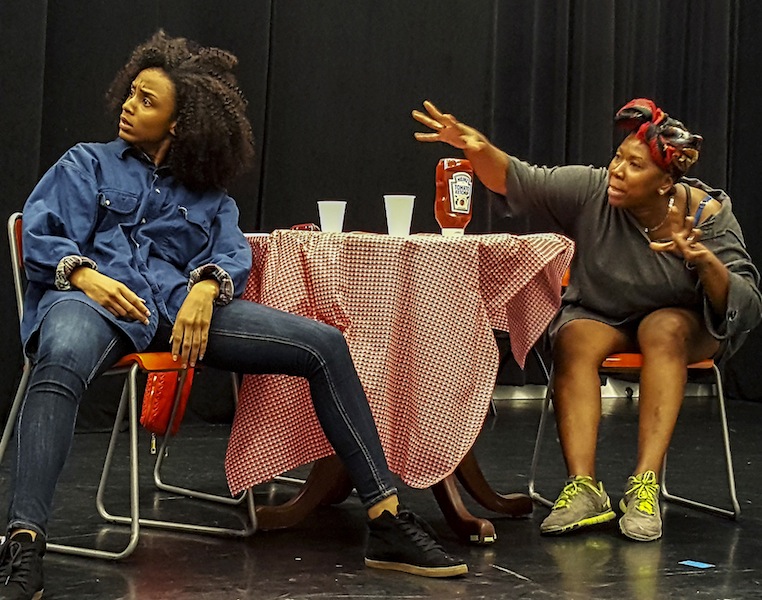 As rituals go, reunions can be fraught experiences. Sure, it’s good to see old friends and catch up, but the past has a way of becoming an insistent thrum, so that uncomfortable memories and old transgressions bubble to the surface again.

The characters in Stephen Adly Guirgis’ intense, wildly entertaining “Our Lady of 121st Street” get that, bigtime.

Miami’s Ground Up & Rising has a start-of-season triumph on its hands with the company’s version of Guirgis’ 2002 Off-Broadway hit. That the bare-bones, exquisitely acted production is running for only six performances over two weekends – and the first weekend is already history – is truly a pity. The play and the actors’ work in it are fierce, funny and powerfully engaging. The show deserves to be seen by many more theater lovers than the 60 per performance who can be accommodated in the Lab Theater at the South Miami-Dade Cultural Arts Center. The characters in “Our Lady” have gathered for the funeral of Sister Rose, an alcoholic nun whose no-nonsense, big-stick discipline didn’t negate her influence on and compassion for her students.

Some of Rose’s ex-students – Los Angeles-based radio personality Rooftop (Marckenson Charles), Wisconsin professional guy Flip (Keith C. Wade) and his actor-partner Gail (Christian Vandepas) – have come from afar. Others never left their Harlem neighborhood. But the mourners are confronted with reunion jitters and a bizarre mystery: Sister Rose’s body has vanished from the Ortiz Funeral Home.

The power of “Our Lady of 121st Street” is cumulative, as Guirgis builds his neighborhood portrait through a series of short scenes. But the way the Pulitzer Prize-winning playwright engages an audience is immediate, as a mourner named Victor (Antoni Corone) rants about the Sister Rose’s missing body as well as the glaringly obvious theft of his pants. Listening attentively, asking quiet questions of the agitated man and offering a nip from his oft-used flask, a police detective named Balthazar (Carbonell Award winner Gregg Weiner in a virtuosic, perfectly calibrated performance) shares the story of a close-to-home tragedy.

Guirgis, director Arturo Rossi and the cast make the scenes so vibrant that, once you’ve met all of Sister Rose’s ex-students and the other characters, you miss them when they’re offstage and anticipate their return.

The dynamic between the intense Edwin (Curtis Belz) and his loving, vulnerable, brain-damaged brother Pinky (Rayner Gabriel Garranchan) is deeply touching and beautifully rendered by the two actors. Edwin finds himself drawn to Sister Rose’s niece Marcia (a compelling Valentina Izarra), a mercurial woman who summons his tamped-down longing. The closeted-in-Harlem Flip and his flamboyant partner Gail discover that their trip to New York has become a Rorschach test for their relationship – an ugly one at that.

Father Lux (George Schiavone), a disabled priest who proves to be frank to a fault, cantankerously hears the long-overdue confession of Rooftop, who catalogues years of transgressions, many of them sexual. Sitting in a “confessional” that is nothing more than a rectangle of light supplied by designer Will Cabrera, Charles is utterly mesmerizing as a powerful personality looking for absolution – or a way to forgive himself – for shattering the heart of his former wife Inez (Kameshia Duncan). Still as furious as the day Rooftop betrayed her for the last time, Inez isn’t having any of her ex’s pet names or summoning of the past, yet Duncan offers glimpses of her wounded soul.

Norca (Shein Mompremier), a woman who seems intent on destroying her own life with drinking, drugging and wildly bad behavior, tangles with Inez, a flabbergasted stranger named Sonia (Rachel Chin) and, most acutely, with Balthazar as he questions her about the missing body. Mompremier and Weiner, who last appeared together in GableStage’s “The Royale,” clash with an intensity that becomes seismic.

In terms of design, “Our Lady of 121st Street” hews to Ground Up’s philosophy of using its limited resources to hire strong actors rather than spending money on elaborate sets and fancy furniture. The wisdom of that investment is evident throughout this simple, magnetic, moving production.