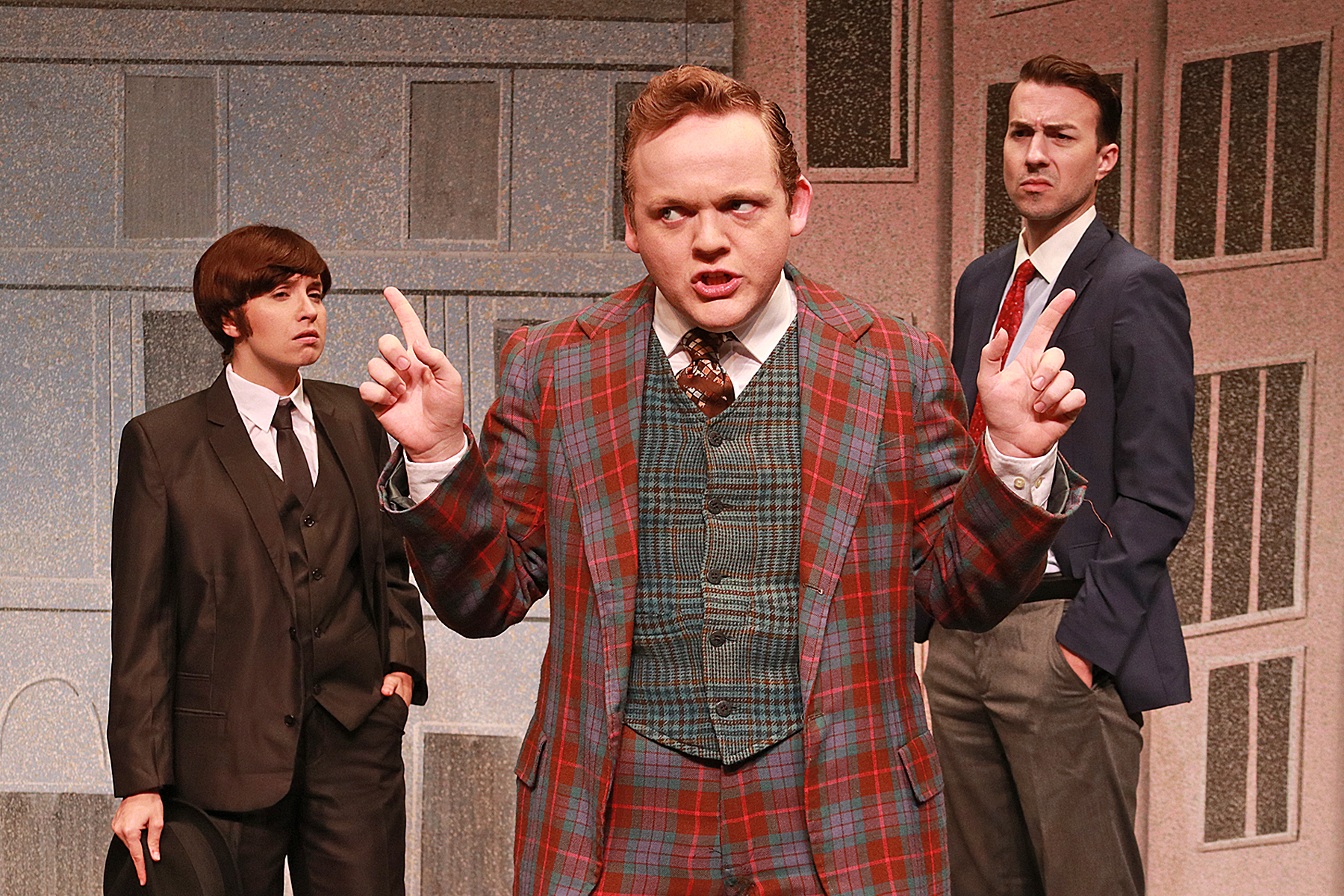 Commedia dell’arte, the Italian cousin of farce, proves to have great staying power in the Actors’ Playhouse production of the London and Broadway hit “One Man, Two Guvnors.”

Playwright Richard Bean’s zany 2011 update of Carlo Goldoni’s 1746 play “The Servant of Two Masters” is set in the English seaside town of Brighton in 1963, not long before the British Invasion/Swingin’ ’60s would so massively affect youth culture. The play honors the era while staying true to the characters devised by Goldoni. And no, you don’t need to know a thing about commedia dell’arte to find “One Man” very, very funny.

Director David Arisco, his comedically adroit cast and a four-man band led by Erik Fabregat have mastered the complexities of a play with many facets: dialogue and the need for impeccable timing, goofy physical business, great live skiffle music (a British jazz-blues-folk genre of the 1950s that influenced groups such as the Beatles). The pace could be tightened at the beginning of the show — introducing the characters seems to take forever — but once “One Man” gets rolling, it’s a hoot.

The central character is Francis Henshall (Wesley Slade), an out-of-work skiffle musician who finds himself in the stressful employ of two demanding bosses. Rachel Crabbe (Krystal Millie Valdes), disguised as her thuggish late twin brother, Roscoe, is one master. The breezy, upper-class Stanley Stubbers (Cliff Burgess), Rachel’s lover and the man who dispatched Roscoe, is the other.

Roscoe was about to be betrothed to Pauline Clench (Leah Sessa), the bubbleheaded daughter of retired mob guy Charlie “The Duck” Clench. Given his demise, Pauline is instead getting engaged to her true love, aspiring actor Alan Dangle (Clay Cartland), the narcissistically artsy son of Charlie’s solicitor, Harry Dangle (Christopher Chisholm). Also at the engagement party are Charlie’s former prison pal Lloyd Boateng (Reggie Whitehead) and Charlie’s feminist bombshell of an accountant, Dolly (Anna Lise Jensen).

Once all those plot cogs are in place, it’s off to the races. Two waiters, cheeky Gareth (Christian Ortega) and the elderly, accident-prone Alfie (Phillip Andrew Santiago), do their bits to help sell the carefully choreographed craziness at the end of a long first act, as does a hapless “volunteer” from the audience.

Plenty of the success of the Actors’ Playhouse production rests on Slade’s plaid-clad shoulders (the great’60s costumes are by Ellis Tillman). As with Tony Award winner James Corden, the “Late Late Show” host who played Francis in London and on Broadway, Slade is the lynchpin for much of the action. Although much of his dialogue and action are scripted, the actor also has to be quick with improvisation, and Slade is a skillful, likable juggler who easily keeps the comedy aloft.

His Francis and Jensen’s delicious Dolly quickly fall for each other, and though they seem an odd couple, you soon find yourself hoping she’ll indeed agree to go on holiday to Majorca with him or his fictional Irish doppelganger, Paddy.

Burgess is sly and suave as Stanley, and when he eventually ends up snogging with Valdes’ plucky Rachel, the result is hormones gone hilariously amok. Comedy mastermind Cartland, who recently got a Carbonell Award nomination for playing a vain rock god in Slow Burn’s “Rock of Ages,” makes Alan a visually and verbally pretentious show unto himself. Sessa is wide-eyed and convincing as the lovely but dim Pauline.

As for the play’s “elders,” Louis has a calm yet unnerving presence as Charlie, and his particular British accent is one of the best among the cast. Chisholm is amusingly decked out (muttonchops and all) as Harry, and the lithe Whitehead gives the steel drum a go when he (like others in the cast) takes a brief turn with the band.

The band, dubbed the Rave, sings skiffle numbers before the show, between some scene changes and just after intermission. Fabregat is a wonderful vocalist and guitar player as well as an actor, and his speaking accent zips the audience to England circa 1963. Musical director Daniel Bailey is, at one point, literally on the bass, with electric guitarist Chase Maddox and percussionist Lukas Webber rounding out the sound instrumentally and vocally.

Set designer Jodi Dellaventura has rendered the play’s multiple locations in a somewhat cartoonish way. She and Arisco opted not to provide stairs for Santiago’s Alfie to tumble down, thus leaving it to sound designer Shaun Mitchell to suggest unseen pratfalls. That’s not nearly as funny as the real thing. Lighting designer Eric Nelson and wig designer Gerard Kelly (kudos for Jensen’s beehive do) are the show’s other creative collaborators.

There’s a bit of door slamming in “One Man, Two Guvnors,” but the show largely remains in the commedia dell’arte lane. The strong cast and talented musicians make that a good place to be.