Review: Nilo Cruz explores a distanced world in ‘Kisses Through the Glass’ 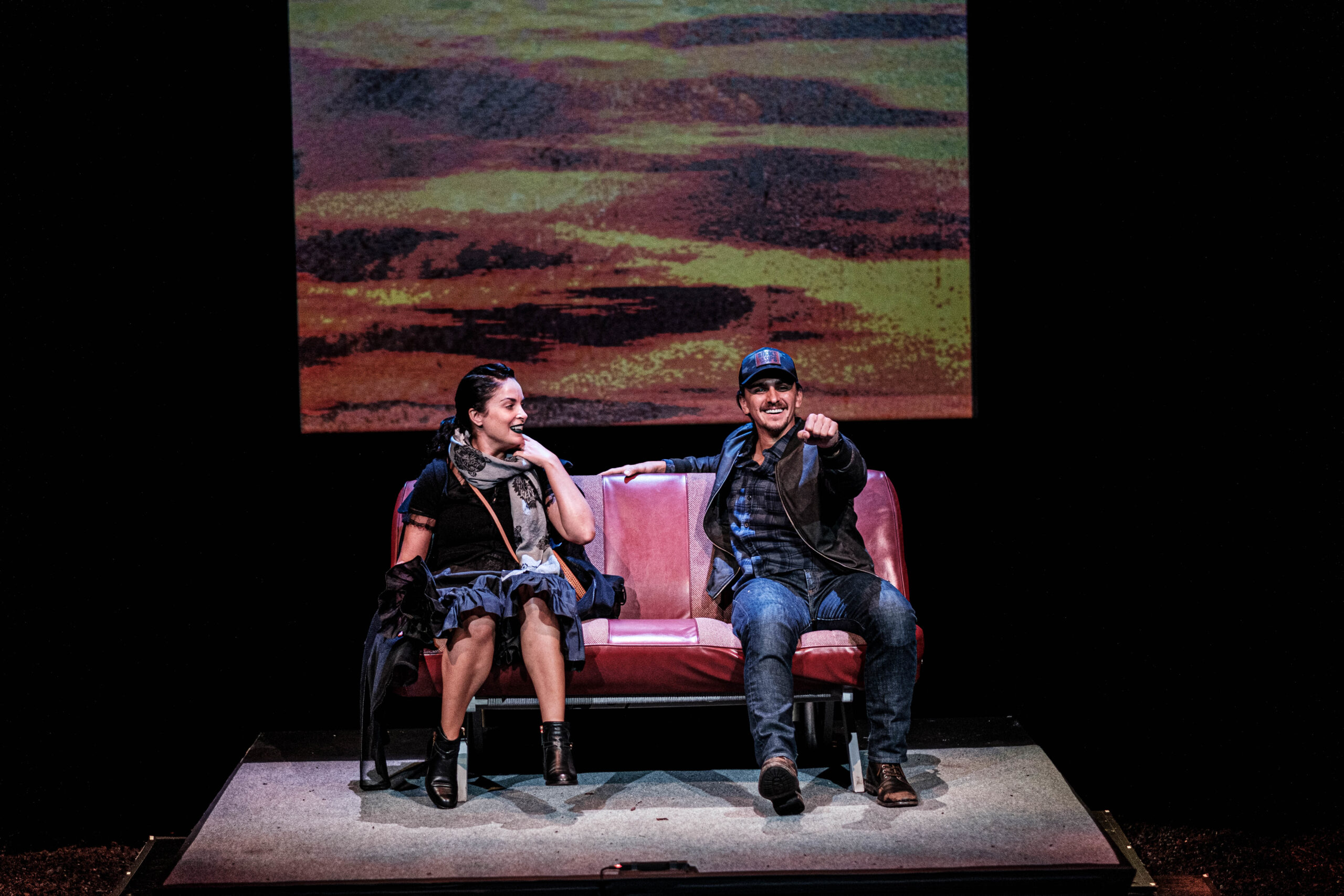 Hannia Guillén and Leo Oliva in the world premiere of Nilo Cruz’s “Kisses Through the Glass” at the Miami Dade County Auditorium through Aug. 7. (Photo courtesy of  Julio de la Nuez)

A man and a woman meet in a truck stop diner, a place that can be conducive to connections of the fleeting physical kind.  She is an edgy, ravishing beauty looking for a ride south. He is a good-looking trucker, and he is a man mesmerized – as is every other guy in the place – by the irresistible woman he spies through the window.

That setup could lead, well, anywhere.  But because the play, “Kisses Through the Glass,” is a world premiere piece by Pulitzer Prize winner Nilo Cruz, the journey that follows blends symbolism, poetic language, allegory, and realism.

Commissioned by Miami’s bilingual Arca Images and presented by Arca and Miami-Dade County Auditorium (MDCA), “Kisses Through the Glass” is getting a two-week run at MDCA’s On.Stage Black Box, the venue’s more intimate space where actors and audience occupy the stage. The Cuban-American Cruz, who also directed the production, wrote the play in English (as is his custom). Simultaneous translation in Spanish is also available through headsets.

Truth be told, the language in “Kisses Through the Glass” is Cruz’s own dramatic/literary blend, a lexicon suited to dialogue suffused with imagery.  This is his pandemic play, though COVID isn’t referenced, and the mysterious virus infecting and killing people is most often referred to as the “malady.” 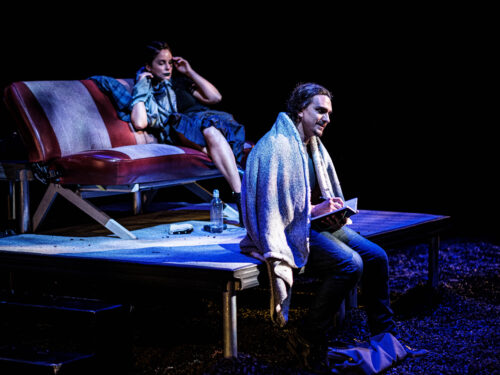 Hannia Guillén and Leo Oliva come to the end of a passionate road in the Arca Images world premiere of Nilo Cruz’s “Kisses Through the Glass.” (Photo courtesy of Julio de la Nuez)

The strangers on a journey without a set destination are truck driver Trevor dos Santos (Leo Oliva) and actress Anabella Lundi (Hannia Guillén).

Their attraction is such that, in a world free of the malady, they would doubtless become lovers.  Vibrant Anabella is a caution-to-the-wind type, ready to act on their growing passion.  Trevor shares her desire but, because he is obviously becoming ill, he won’t do anything that could lead to her death. He won’t even touch her, much as he wants to.

Sometimes, Trevor and Anabella do what Cruz calls “…speaking their thoughts through the language of the gaze.”  They also talk about the events that happen on their journey – a run-in with a deer, nature itself, Trevor’s exhaustion and near-delirium. He helps her rehearse dialogue from a play-within-a-play about a persecuted priest and nun in 1920s Mexico. He wants to leave Anabella and the truck, abandonment being his solution to keeping her safe.

“Kisses Through the Glass”  is a difficult play to stage, and despite his prodigious gifts as a director and the talents of his collaborators, Cruz hasn’t fully met his script’s challenges. 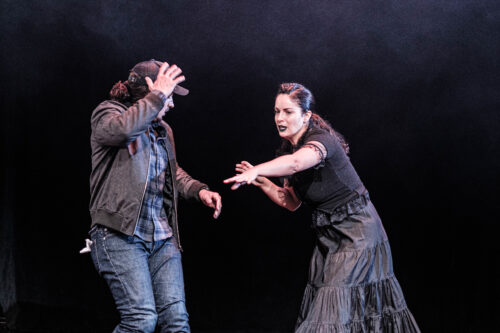 Perhaps a story set in a big rig needs to be a movie, so you have the vehicle and the road and the closed-in environment of the truck’s cabin.  Here, set designer Amalia Restrepo puts a truck seat on a platform with a few stairs leading to invisible driver and passenger “doors.”  Nature takes the form of ever-changing projected paintings or a rainy deluge, with rocky red mulch representing the forest floor.  Imagining contagion in a wide-open space – despite our several years of experience with it – isn’t easy.

The playwright-director has ideal storytellers in Oliva and Guillén, both of whom appeared in his November Arca images world premiere “Hotel Desiderium.”

The New York-based Guillén, who launched her acting career at Miami-Dade College’s Prometeo under Teresa María Rojas, has appeared in numerous Cruz plays throughout the country; the author and the actor get each other. She’s a brilliant, physically engaging, captivating performer, and in celebrity designer Danny Santiago’s all-black costume for Anabella, she gives off a Goth-meets-“Sex and the City” vibe.

Oliva, a Miami native based in Los Angeles (he’s also the producer-writer and an actor on the streaming series “Home Invasion”), exudes strength and sensitivity as Trevor.  His decline as the “malady” takes hold is distressing and thoroughly believable. And he, too, has a way with Cruz’s words. 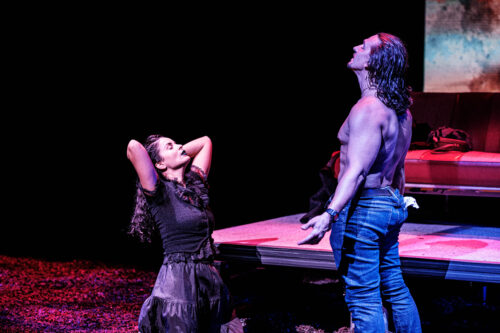 As with so many of the plays Cruz has staged for Arca, “Kisses Through the Glass” underscores the artistry of theatrical collaboration.  Ernesto Pinto’s lighting is vital to emphasizing the shifting moods of the couple’s journey.  Sound designer Mariana Restrepo summons crickets, birdsong, the roar of the truck engine. And the music woven throughout the play is haunting and emotionally illuminating.

“Kisses Through the Glass” is different from so many plays in Cruz’s body of work.  Some of its language seems almost formal, while other lines blaze with vivid imagery.  Anyone – everyone – who endured pandemic isolation and engaged with others through a distancing computer screen will understand – as Trevor and Anabella do – the ferocious need for no-filter human contact.

WHAT:  Arca Images world premiere of “Kisses Through the Glass” by Nilo Cruz, in English with simultaneous Spanish translation

Performed by a cast of 10 actor-singer-musicians, the Actors’ Playhouse production of "Hank Williams: Lost Highway" is a fascinating, complex, charismatic version of a gone-too-soon artist.
Continue Reading