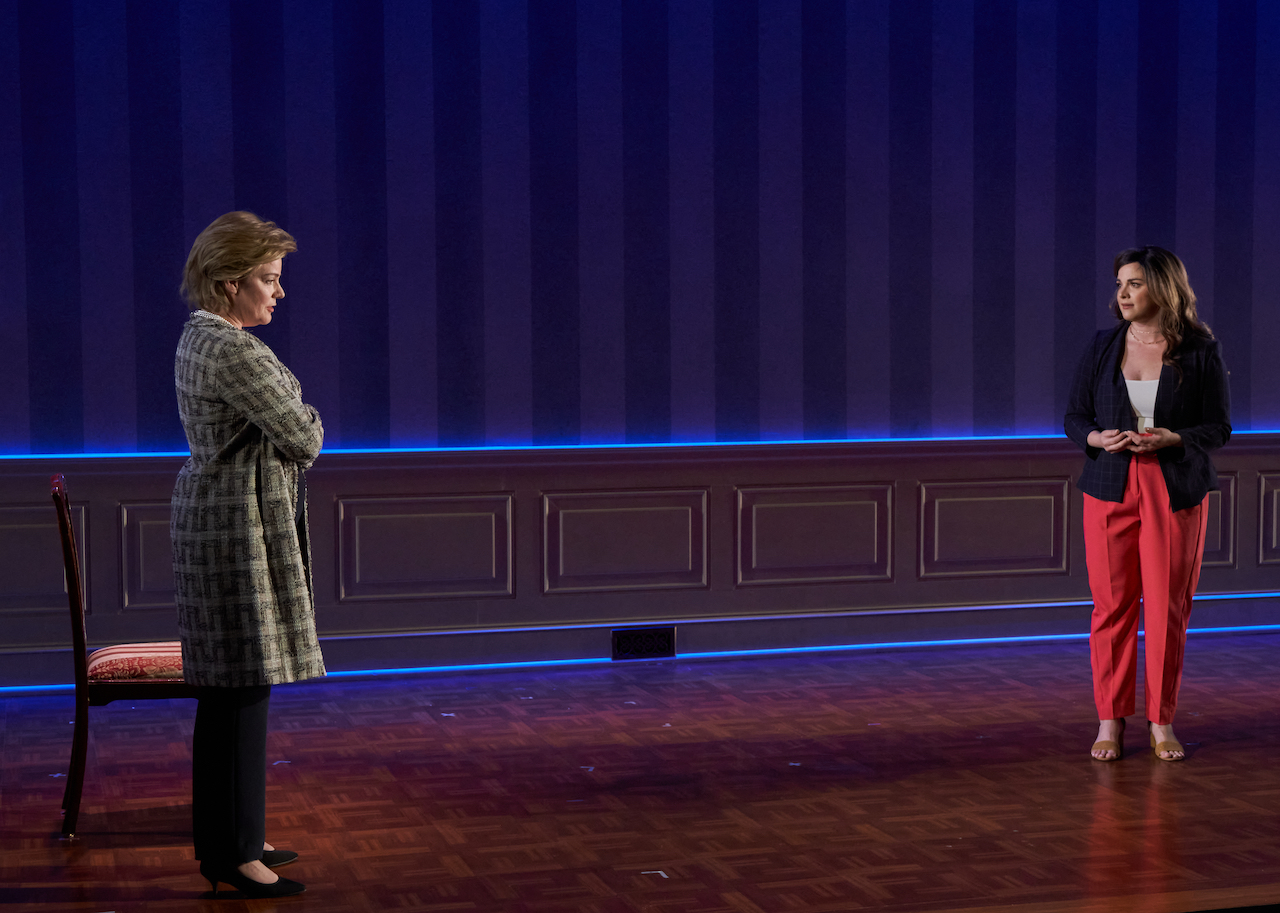 One question cascades into so many others: What would happen if Monica Lewinsky were to come face-to-face with Hillary Clinton for a private reckoning?

Grounded in fact and Miller’s prodigious research, the play unfolds in a series of concise, quickly moving scenes.

They begin just after White House intern Lewinsky’s first private encounter with then-President Bill Clinton in 1995 and end some 27 years later with the meeting suggested by the play’s title – a meeting which becomes a debate between the 74-year-old former first lady, U.S. senator, secretary of state and two-time presidential candidate, and the 48-year-old Lewinsky, who now works to combat cyberbullying.

Between that beginning and ending, Miller considers the very different trajectories of the women’s lives, two vitally close relationships (Lewinsky’s with her mother, Marcia Lewis, and Clinton’s with her increasingly important political associate Huma Abedin), and the costs exacted by politics and fame. 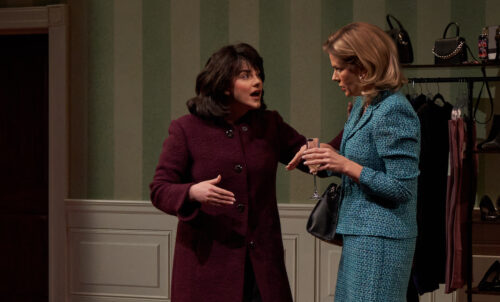 The playwright also pinpoints generational and personal differences in feminist perspectives, points of view that factor into why Clinton and Lewinsky see the latter’s ruinous relationship with the former’s husband so differently.

“When Monica Met Hillary” is not, in any respect, a dry or heavy look at a 1990s scandal and its aftermath.

Miller and director Margot Bordelon shift the focus away from the women’s well-documented public personas, instead looking at how they may have reacted in private moments away from media scrutiny. Sorrow, fury, humor, calculation, despair and more come into play as the women cope with the fallout from the scandal that factored heavily into President Clinton’s impeachment in late 1998 (he was subsequently acquitted in a 1999 Senate trial).

Miller establishes the frank-to-a-fault nature of the relationship between Lewinsky (Kyra Kennedy) and her mother, Lewis (Mia Matthews), in the first scene.

The elegant Lewis meets her daughter in a pricey Washington, D.C., dress shop in mid-November 1995. Lewinsky, so excited she can barely get a sentence out, proceeds to give her mom a graphic step-by-step account of what the 22-year-old intern sees as a sexy romantic rendezvous with the president. Breathless, actually squealing more than once, she dismisses her mother’s cautionary advice.

Clinton (Danielle Skraastad) appears in the fourth scene, set in January 1998 on the morning after her husband’s confession that he’d lied to her about his relationship with Lewinsky.

She is angrily strategizing about how to cope with the coming fallout and how best to tell their daughter, Chelsea, the truth. Abedin (Rasha Zamamiri), the first lady’s former intern, offers her furious boss everything from soup to empathetic encouragement. Once she departs, a completely uncensored Clinton reams her husband out over the phone. Clearly, this is not a first offense. 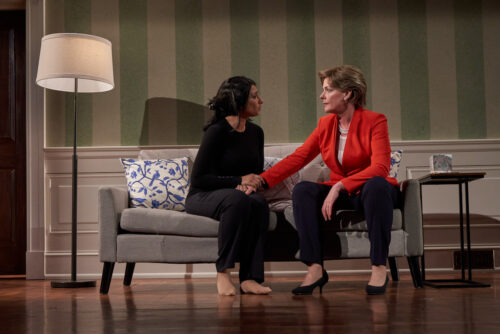 “When Monica Met Hillary” is built in part on parallels as Clinton and Lewis, the older women, care for and nurture the younger ones.

When a hounded Lewinsky is hiding out at the Watergate apartment she shares with her mother, Lewis tries soup (the play’s comfort food), validation and emotional reassurance to keep her shattered daughter from doing anything drastic.

At a London hotel in 2011, as the pregnant Abedin is figuring out how she’ll cope with then-husband Anthony Weiner’s first sexting scandal, Clinton offers advice on handling the about-to-break crisis and getting beyond betrayal. Been there, done that, or as Clinton puts it, “I know all the words to that song.”

In less-adroit artistic hands, a “what if” play about a Monica Lewinsky-Hillary Clinton meeting might be unwieldy as it revisits so much history. But “When Monica Met Hillary” is 80 or so minutes of often riveting theater presented with clarity and thought-provoking emotional impact.

Augmented with a helpful-as-refresher timeline inserted into the play’s program, “When Monica Met Hillary” establishes the changing year and location via lighting designer Yuki Nakase Link’s projections at the beginning of each scene.

Reid Thompson’s set, a malleable space with striped pale-green and off-white wallpaper, swiftly transforms from the White House to a series of hotel rooms with the addition or subtraction of doorways and different furniture.

Underscored by sound designer and composer Palmer Hefferan, scene changes are so blink-of-an-eye brisk that the play feels as if it flows continuously. Kudos to director Bordelon for her vision and its execution.

With the character-transforming help of designer Dina El-Aziz’s costumes and Carol Raskin’s wigs, the actors look enough like the characters they’re playing that, for most in the audience, any mental images of the real-life women aren’t likely to intrude.

Playing Miller’s richly drawn roles, the performers go all-in with the fervor actors bring to originating a character in a significant play. 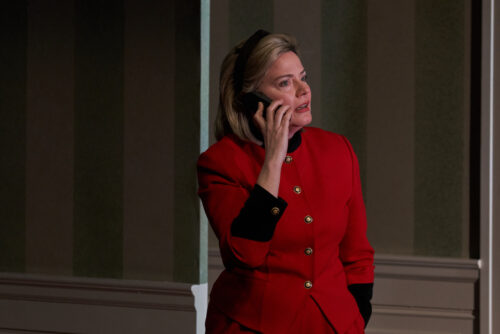 Skraastad shows us a carefully calibrated Hillary Clinton, a brilliant and ambitious woman who watches every word she utters in public but drops the filters with Abedin, railing after a 2007 college campaign stop, “Can we all agree to call preying on another woman’s husband a form of misogyny? And for Christ’s sake, yes, women are powerful, independent beings with sexual desire and agency! So let’s not take an autonomous woman, infantilize her and call her naive.”

Zamamiri’s Abedin has plenty to play as a woman undone by the idea that she, like her mentor, must navigate a marital scandal – not one, but two. She listens to Clinton’s advice but finally chooses a different path. Perhaps because the real Abedin chose to remain the woman behind the scenes for so many years of working with Clinton, Zamamiri most often registers as restrained and enigmatic.

As Lewinsky, Kennedy comes across at first as energetic and childlike, a Beverly Hills rich kid accustomed to validation, a girl who never had to work for anything. Lost after the scandal, taunted online by trolls, she eventually finds a purpose. Yet her in-person mea culpa to Clinton, particularly when the conversation veers into #MeToo territory, doesn’t go as planned. And in that critical final scene, the play’s payoff, Kennedy’s understandably nervous Monica doesn’t seem to have become a mature woman.

Though Matthews is playing the least-known figure in “When Monica Met Hillary,” her interpretation of Lewis is always assured and on point in terms of a mother fiercely protecting her daughter, often to the younger woman’s detriment. As the two visit a nail salon, her suggestions about ways in which her foundering child could change her life are pretty much soul-crushing.

The play’s final scene, the fulfillment of the title’s promise, mixes honesty, jolts of calculated cruelty and fireworks. Its final moments could be strengthened. But Miller’s artistic vision is powerful, making for an experience worth sharing and contemplating.