Review: ‘Mamma Mia!’ at Actors’ Playhouse is escapist theater of the best kind

Feeling joyous is not so easy these days, given the country’s toxic politics, global climate change, potential pandemics – well, pick your anxiety-producing crisis.

But at least temporarily, joy can be experienced for the price of a theater ticket.

Anyone who helped make “Mamma Mia!” a $4 billion global behemoth would probably tell you that the 21-year-old jukebox musical, which pairs hits from the Swedish pop supergroup ABBA with a silly plot, is pretty much a sure thing when it comes to mood boosting. That doesn’t mean “Mamma Mia!” is great theater – it isn’t – but it works as an escapist oasis.

Actors’ Playhouse at the Miracle Theatre in Coral Gables has just opened a “Mamma Mia!” that is bright, bouncy and beyond broad.

As for Catherine Johnson’s drop-an-ABBA-hit-here plot, which is set in a “not so distant past,” the show centers on the upcoming nuptials of 20-year-old Sophie Sheridan (Meredith Pughe). Sophie has been raised by her never-wed mom Donna (Jodie Langel), a former singer who has carved out a nice life for the two running an inn on the island. 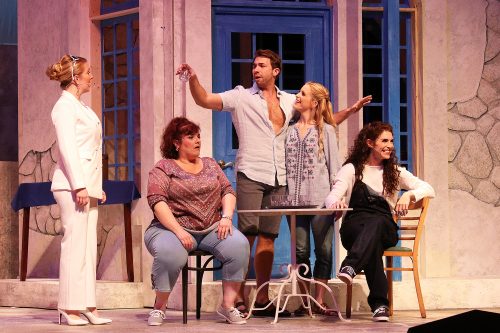 As her wedding to Sky (Drew Arisco) draws near, Sophie discovers her mother’s diary from 1979 and figures out that one of three guys who were Donna’s lovers in quick succession – American architect Sam Carmichael (Jim Ballard), British banker Harry Bright (Mark Sanders) and Aussie writer Bill Austin (Ed Kemper) – is probably the father she has never known. Without saying anything to her mom, she invites all three to the wedding.

Once the guys show up, it seems to take an inordinate amount of time for the older generation to figure out what’s going on (we have the advantage, since we’ve seen the “Mamma Mia!” movies starring Meryl Streep).

Does it matter? Not really. “Mamma Mia!” is all about the tunes written by ABBA’s Benny Andersson and Björn Ulvaeus, and whether or not (sometimes not) they fit tidily into the plot, they’re belted or crooned with aplomb in the Actors’ production.

Langel, a dark-haired beauty with an amazingly toned figure and Broadway chops, delivers the vocal goods whether her Donna is singing dramatic solos or singing as Donna and the Dynamos with her backup besties: Tanya (Mandy Striph) and Rosie (Margot Moreland).

Striph gets a nice showcase moment with Reynel Reynaldo’s smitten Pepper on “Does Your Mother Know,” and Moreland goes all-out (and then some) in comic pursuit of Kemper’s flummoxed Bill as they sing “Take a Chance on Me.”

Ballard, who also played Sam in the Maltz Jupiter Theatre’s memorably fine production of “Mamma Mia!” a year ago, tonally matches Langel in terms of exasperation as the two sing “S.O.S.” to deal with past wounds and present misunderstandings. Sanders’ Harry is the buttoned-up banker on holiday, a man determined to release his inner goofball.

As Sophie, Pughe gets the show going with a lovely “I Have a Dream,” and she sings well with her “dads” and her beloved Sky, who is more than a little miffed that she has undertaken this finding-my-father thing without confiding in him. Actor Arisco, son of the show’s director, has performed at various regional theaters and toured nationally in “Something Rotten!,” and his warm voice and comfortable dance style are suited to Sky. 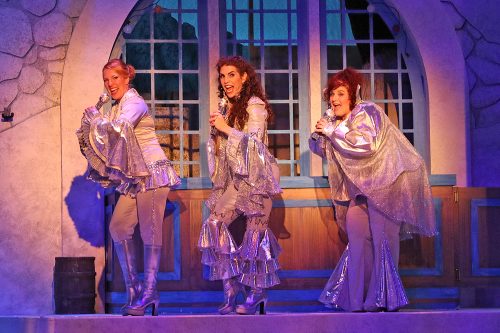 Kaléa Leverette as Lisa and Lauren Horgan as Ali, Sophie’s pals and bridesmaids, manage to sing “Honey, Honey” with her while executing sometimes-awkward moves. Conor Walton as Eddie and Reynaldo as Pepper remain charming even as they’re literally being pushed around by Donna.

Alex Jorth, also among several cast members who did “Mamma Mia!” at the Maltz, radiates unflappability as the wedding officiant who can cope with a major change at the last minute.

In sensory terms, the Actors’ Playhouse production can be an overwhelming experience. Some of the performers push so hard they might as well be in their  final moments in a hospital delivery room. The rock concert-style sound is rarely subtle – quite the opposite – and at least on opening night, some performers were fleetingly a tiny bit off in terms of pitch.

“Mamma Mia!” is not, obviously, a musical theater masterwork, nor is it in the same league with a great jukebox musical like “Jersey Boys.” It serves up escapist fun largely via its ABBA earworms, which gets some in the audience singing along even during the overture and turns most theatergoers into dancing queens by the time the concert-style curtain call comes around.