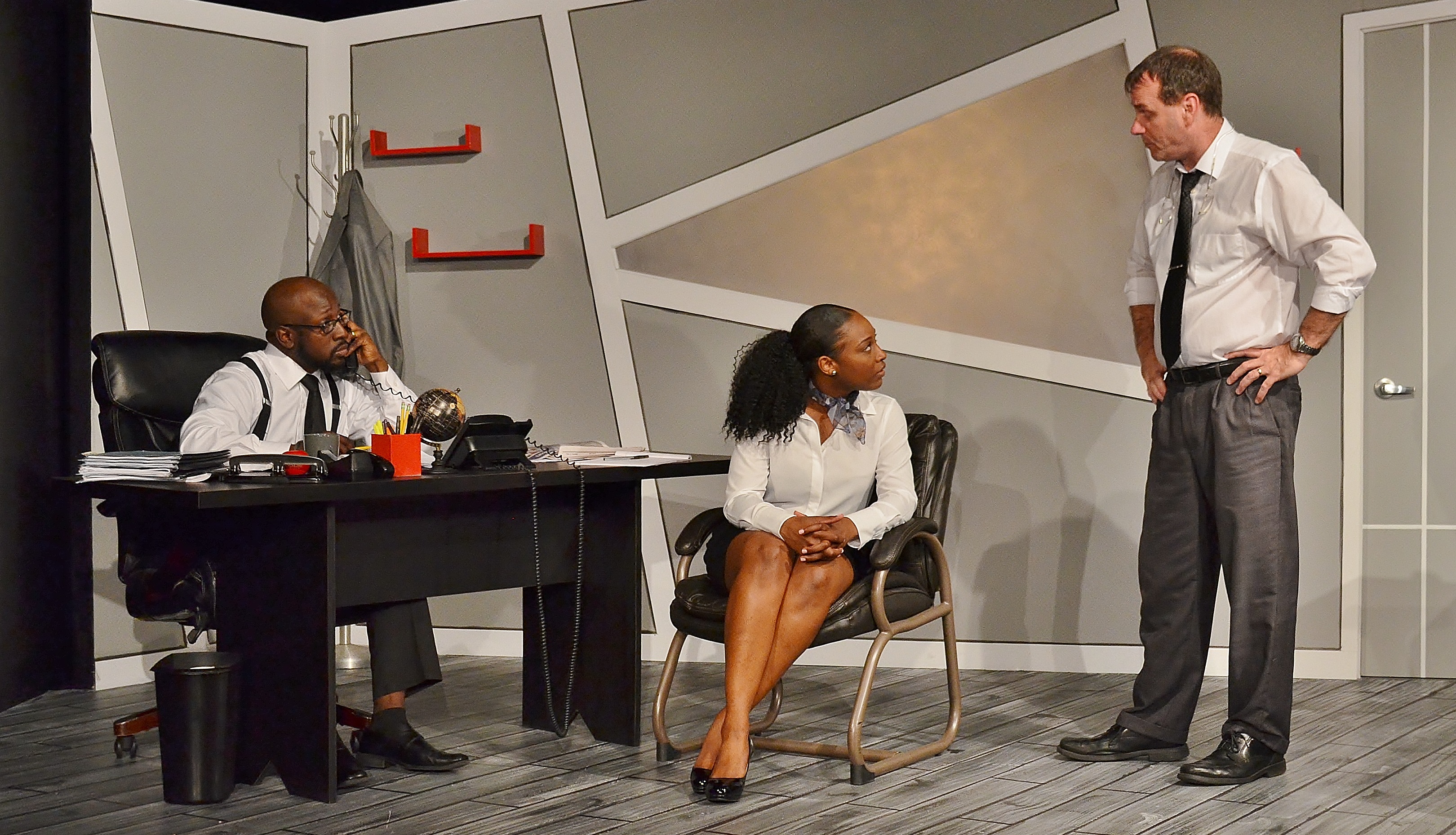 In the years since the 2016 presidential election, civility and empathy seem to be fading away. Overt racism, sexual abuse brought to light by the #MeToo movement, the kind of unfiltered aggression found in presidential tweets: All contribute to America’s not-so-beautiful zeitgeist circa 2019.

But David Mamet, playwright and provocateur, got there first with his 2009 Broadway play “Race.”

After a first South Florida production at GableStage in 2012, a new Main Street Players version of “Race” has just opened in Miami Lakes. The piece is a bold choice for Black History Month, given Mamet’s propensity for incendiary and technically challenging dialogue. While this cast doesn’t have the surgical artistic skills of the earlier one, director Lowell Williams effectively guides his actors through Mamet’s tricky territory, a place loaded with land mines involving racism, sexism and all sorts of betrayals.

Mamet’s setup is this: Charles Strickland (Brian McCormack), a married white businessman, stands accused of raping a younger black woman in a hotel room. He has sought out a small law firm, hoping to be taken on as a client by partners Jack Lawson (Christopher Dreeson), who is white, and Henry Brown (Keith R. Oliver), who is black. And yes, Strickland eventually concedes, the optics of being represented by a black lawyer motivated his choice.

Susan (Trittney Nicole Huzzie), a young black lawyer relatively new to the firm, is given the task of managing the nervous client in the outer office while the partners debate whether to take the case. The point becomes moot after Susan makes a couple of moves that turn her bosses into the attorneys of record. Rookie mistakes or something more calculated? In Mamet’s world (think “Oleanna” and “Speed-the-Plow”), women are untrustworthy agents of destruction. Note that the playwright doesn’t bother to give Susan a last name; ditto with the sole female character in “Speed-the-Plow.”

Strickland’s claim of innocence — he says the sex was consensual — unravels as the racist, sexist, vulgar conversation deepens. On the night in question, the alleged victim wore a red sequined dress, yet according to reports filed by housekeeping and the cops, no stray sequins were found in the trashed room. Lawson gets the bright idea of reenacting the crime in the courtroom in a way that involves the disbelieving Susan, and his move is so tone-deaf that you can almost get behind what she winds up doing.

The actors rarely make Mamet’s dialogue crackle, but they get the story told. Dreeson’s Lawson is as emotional and rumpled as Oliver’s Brown is calculating and elegant. McCormack’s Strickland is a clueless cipher. As Susan, Huzzie lacks a poker face, and her laughter sounds forced and false, but she’s believable as a woman with an agenda.

Jade Mesa’s sleek, gray-and-white law office set, with its myriad angles and touches of red to evoke that critical piece of evidence, also contains a triangular, semi-opaque panel that reveals the shadows of people pacing the outer office. What do they hear, you wonder, when the lawyers are plotting?

Lionized and criticized, Mamet can be maddening, for all the intelligence of his writing. Some will find “Race” riveting. Others — myself included — will see it as one more wallow in a deep well of misogyny.