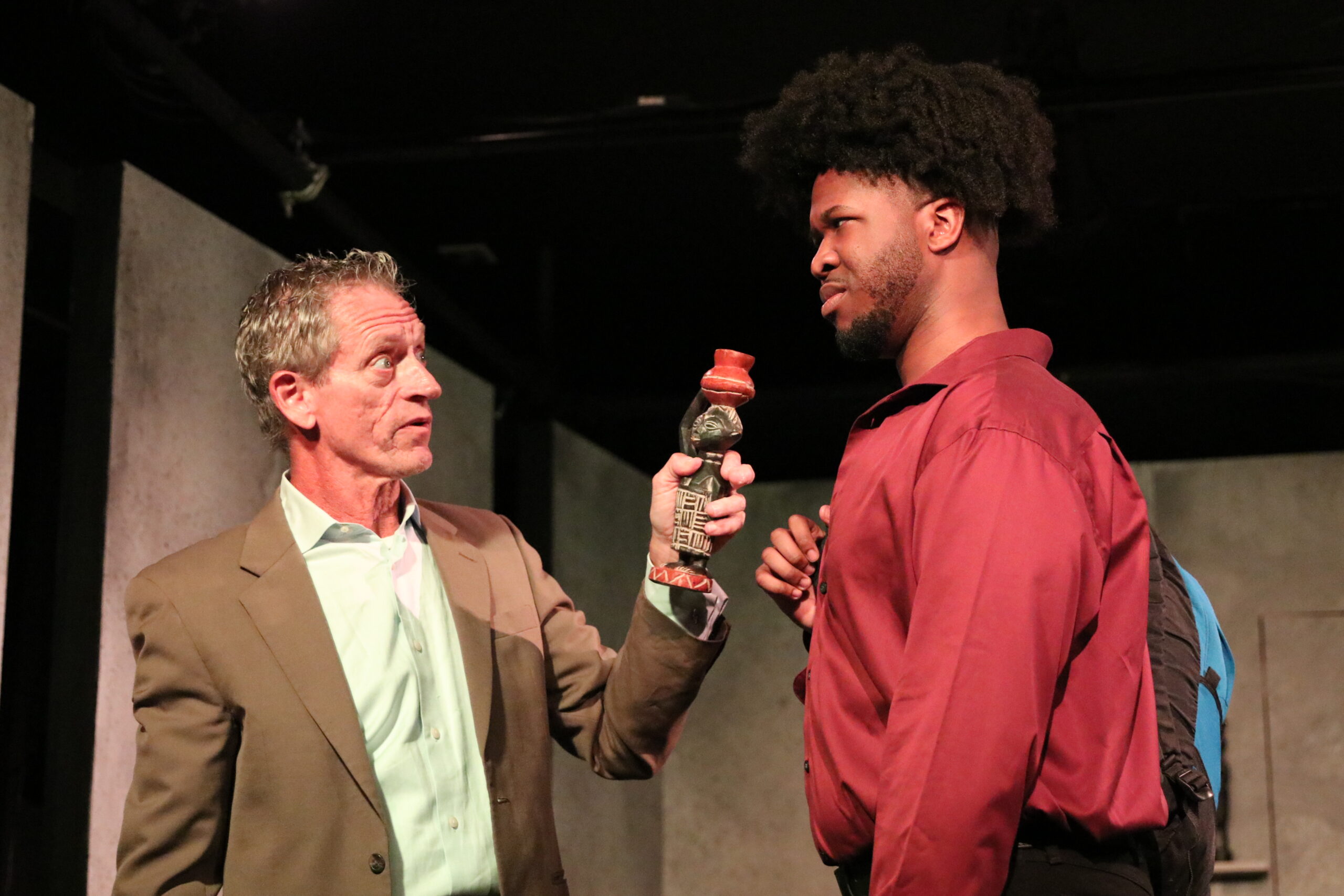 Playwright Lee Blessing has been a prolific mainstay of American regional theater throughout much of his long career. Though his best-known play “A Walk in the Woods,” about a pair of Russian and American nuclear arms negotiators, was his only work to get a Broadway run, Blessing’s many other plays have had high-profile productions at regionals of all sizes.

Manalapan’s much-honored Florida Stage, which shut down in 2011, commissioned one Blessing play (1993’s “Patient A”) and staged the world premiere of another, “Black Sheep,” in 2001.  Now a smaller regional company, Main Street Players in Miami Lakes, has chosen “Black Sheep” as its second production in its new theater a block west of its longtime Main Street home.

“Black Sheep” is an absurdist dark comedy, a piece that is very difficult to pull off tonally.  Blessing is experimenting with style in this play about racism, greed and ravenous desire.  But until the 90-minute production’s waning moments, director Brandon Urrutia and the cast leave the audience as baffled and unsettled as the play’s central character. 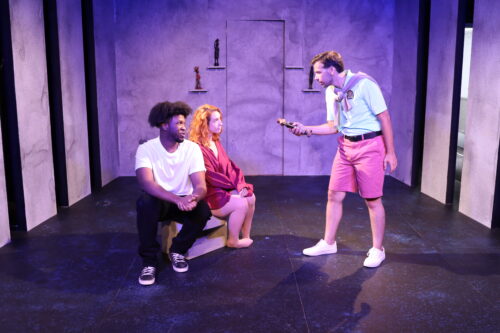 He is Carl Winship (Kyran Wright), the biracial “black sheep” in the fabulously wealthy (and white) Winship family. Though still young, Carl has just served 10 years in prison for the accidental killing of his half-brother.  His uncle Nelson (Michael Vadnal), who agrees with everyone that Carl should not have been tried as an adult, has invited his nephew to take up residence in the guest house on his estate and thus rejoin the extended family.

Nelson’s wife Serene (Jennifer Leah) is anything but what her first name implies whenever she’s in Carl’s presence; she is, in fact, a predator, constantly making moves on him regardless of his lack of interest. 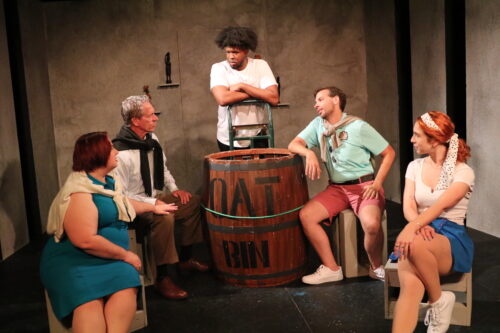 Soon enough, the reason for Carl’s presence on the Winship estate becomes clear.  Each of the characters suggests that, in return for half of Nelson’s fortune, Carl should “accidentally” murder the others. After all, he’s experienced, right?

“Black Sheep” explores insidious racism, the micro- and macroaggressions, among those who insist they are absolutely not racist.  Just one example: Nelson asks Carl where in Africa his “people” are from. Then he looks at one of the many primitive figures now in the guest house. “Why don’t African artists carve what they see?” Nelson asks. Carl’s response? “Maybe that is what they see.”

Much is made of dreams or nightmares in “Black Sheep,” as characters provoke each other or claim some upsetting act took place in a dream state.  Ghosts enter into the picture, too, via references to the 1953 Japanese classic “Ugetsu,” though no one but the most devoted cineaste is going to get that.

Set and lighting designer Amanda Sparhawk has created a kind of gray void with multiple doors to represent the guest house. A few tiny shelves hold the carved figures, but the predominant “furniture” consists of a single barrel moved around on a handcart until it becomes part of yet another noisily expressed sexual fantasy for the man-boy Elle calls “Maxie Millions.”

Urrutia is working with a mostly young, less experienced cast that tends to make obvious choices rather than deepening their line readings.  As Carl, Wright at first tends to scowl, coming off as skeptical or puzzled.  He grows through the play, though, eventually exploiting the character’s power over the others. 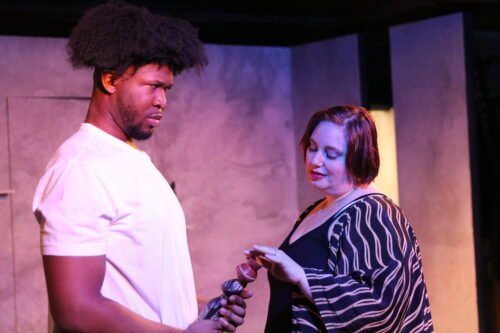 Vadnal and the younger Leah are a mismatch as a couple, she too obviously young to be Max’s mother (stepmom maybe, though the script refers to her as his mother and to Nelson and Serene as Max’s parents).  Wolff is outrageously amusing as he explains his career strategy to Carl and just outrageous when he’s acting out sexually.  Lopez portrays Elle as a conniving beauty who imagines she’s way smarter than she is.

Sound designer Alex Tarradell and Sparkhawk’s lighting contribute to the spooky surreal vibe of “Black Sheep,” and costume designer Angie Esposito effectively contrasts the country club look of the wealthy Winships with Carl’s post-prison attire, which is meager enough to fit in a backpack.

Though the style of Main Street’s “Black Sheep” doesn’t coalesce until later in the play, it would help any theatergoer to know this going in:  This is a play that operates on dream logic. It isn’t linear. Not everything makes sense.  If you can surrender to a story told in an unconventional way, you’ll enjoy it more.

WHAT:  “Black Sheep” by Lee Blessing

Performed by a cast of 10 actor-singer-musicians, the Actors’ Playhouse production of "Hank Williams: Lost Highway" is a fascinating, complex, charismatic version of a gone-too-soon artist.
Continue Reading