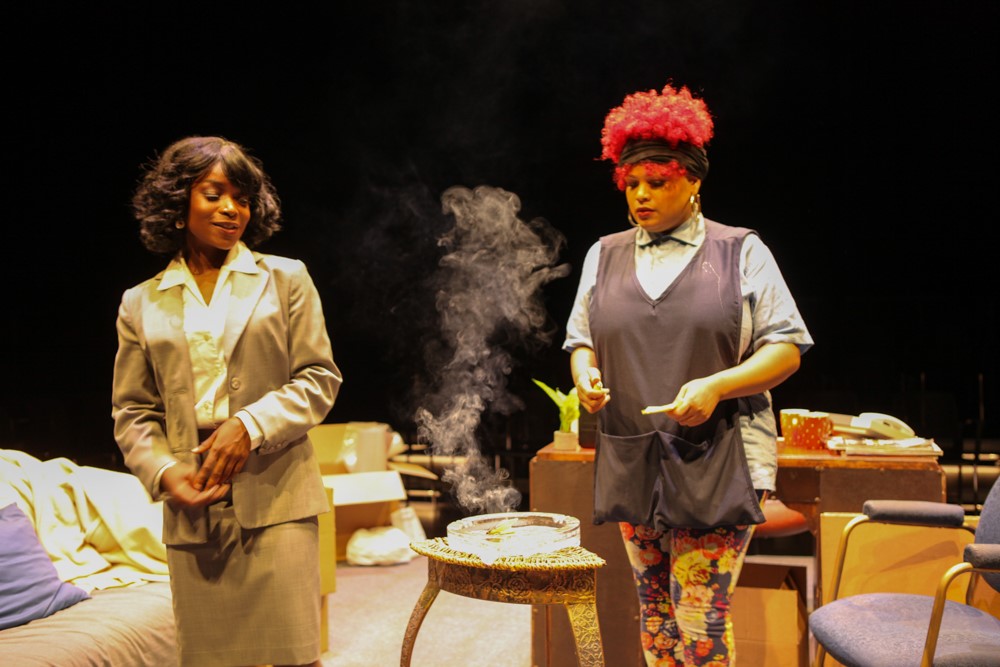 Since the 2016 presidential election, the divides among us have been brought into sharp and contentious relief. Class, race, ethnicity, political beliefs, the widening gap between the haves and have-nots: The fuel for fiery disagreement comes from many places.

M Ensemble’s production of Marsha A. Jackson’s “Sisters,” which has just opened at Miami’s Sandrell Rivers Theater, is a comedy with bite. Although the play is set at the end of the 1980s, before the world was transformed by things like ubiquitous cellphones and Uber, its central conflict between an ambitious black advertising executive and the woman who cleans her office remains realistic and resonant.

Jackson’s plot takes a page from the stranded-strangers playbook. On New Year’s Eve on the 20th floor of an Atlanta office tower, ad exec Olivia Williams (Tuesline Jean-Baptiste) is shoving the contents of her office into boxes. Is she moving to a new office? Was she fired? Did she get a better job? It’s not clear why she’s there alone on a Friday night, on a holiday no less.

Suddenly, singing along to Chaka Khan’s “I’m Every Woman” as it bombards her ears through headphones, Cassie Charles (Chasity Hart) arrives to clean the office. She’s a woman with a crown of vibrantly red curls, a single mom who wants to vacuum and empty the trash and go home. She has better things to do on New Year’s Eve.

All too soon, the women find themselves stuck in the empty building, as an unexpected snowfall and a power outage turn traffic into a nightmare and public transportation into a nonstarter. Although they have race and gender in common, on an ordinary day, these two would probably never talk, except in the most perfunctory way. But that’s not an option, marooned as they are.

For much of the evening, Olivia and Cassie get along like oil and water, unalike as they seem to be. Olivia is a Type A-plus, highly educated and driven, shoving a personal life to the back burner while she achieves her professional goals. She and her no-longer-close sister were taught by their supportive parents that, with work, they could make any dream come true. But a cold dose of good-ol’-boy network reality has led to all that box packing. 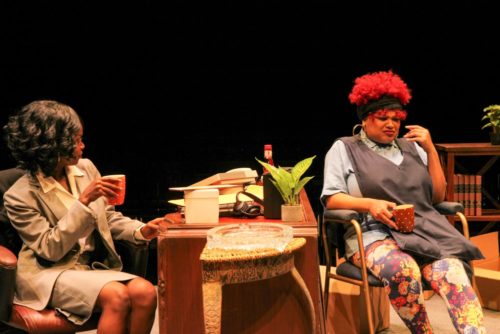 Cassie, a high-school dropout, has led a life of personal sacrifice and hard work. She left school to take over the cleaning jobs her beloved grandmother, M’dear, could no longer do. She’s raising her son, Kevin, on her own. She’s known love and lust, and thanks to M’dear, has a Ph.D. in practical wisdom.

“Sisters,” set 30 years ago, also delves into the issue of the perceived advantages of having a fairer skin tone, as Cassie does, versus a darker one like Olivia’s. Steeped in the world of advertising, Olivia doesn’t see images of girls or women who look like her. She has felt shunned by the girls at her mostly white college and overlooked by men at Atlanta nightclubs. She speculates that Cassie snagging a cashier’s job at McDonald’s may have had as much to do with her appearance as her mathematical ability.

Director Carey Brianna Hart has staged “Sisters” in the round, so set-lighting designer Mitchell Ost and scenic designer Rachel Finley have evoked Olivia’s office with furniture, a desk, bookshelves and the like. When the women walk to the unseen elevator, they mime pressing a button, and the audience hears a “ding!” They also have to pretend to walk down 20 flights of stairs, then back up again, which is more of a stretch of the imagination for the actors and the audience.

The staging also means that the actors have their backs to some of the audience at any given point, so their vocal projection and the sound in the theater are critical. On opening night during the first act, some of the dialogue was tough to decipher, though clarity improved after intermission. That clarity is vital.

Actors Hart and Jean-Baptiste, both New World School of the Arts grads, dig into Jackson’s characters and create women who slowly shed their defenses to benefit from their time together. Hart is masterfully funny, impeccable in her timing, great at getting down to plainspoken reality. A wonderful singer, she does theater less often, which is too bad — her training and talent give her a real presence onstage.

Jean-Baptiste, just out of New World, has to have a more reserved persona as Olivia, though she noisily dissolves into tears as Olivia wallows in the crash and burn of her plan for blazing success. Dressed in a neutral, skirted business suit by costume designer Shirley Richardson, her chic pumps tossed aside for the box-packing practicality of sneakers, the petite Jean-Baptiste looks more like a kid than an ad woman. Yet, as Cassie discovers, there’s more to Olivia than meets the eye.

Larger issues provide “Sisters” with its thematic weight. But the knowing, funny work by Hart, Jean-Baptiste and their director give an enjoyable, enlightening play its buoyancy.