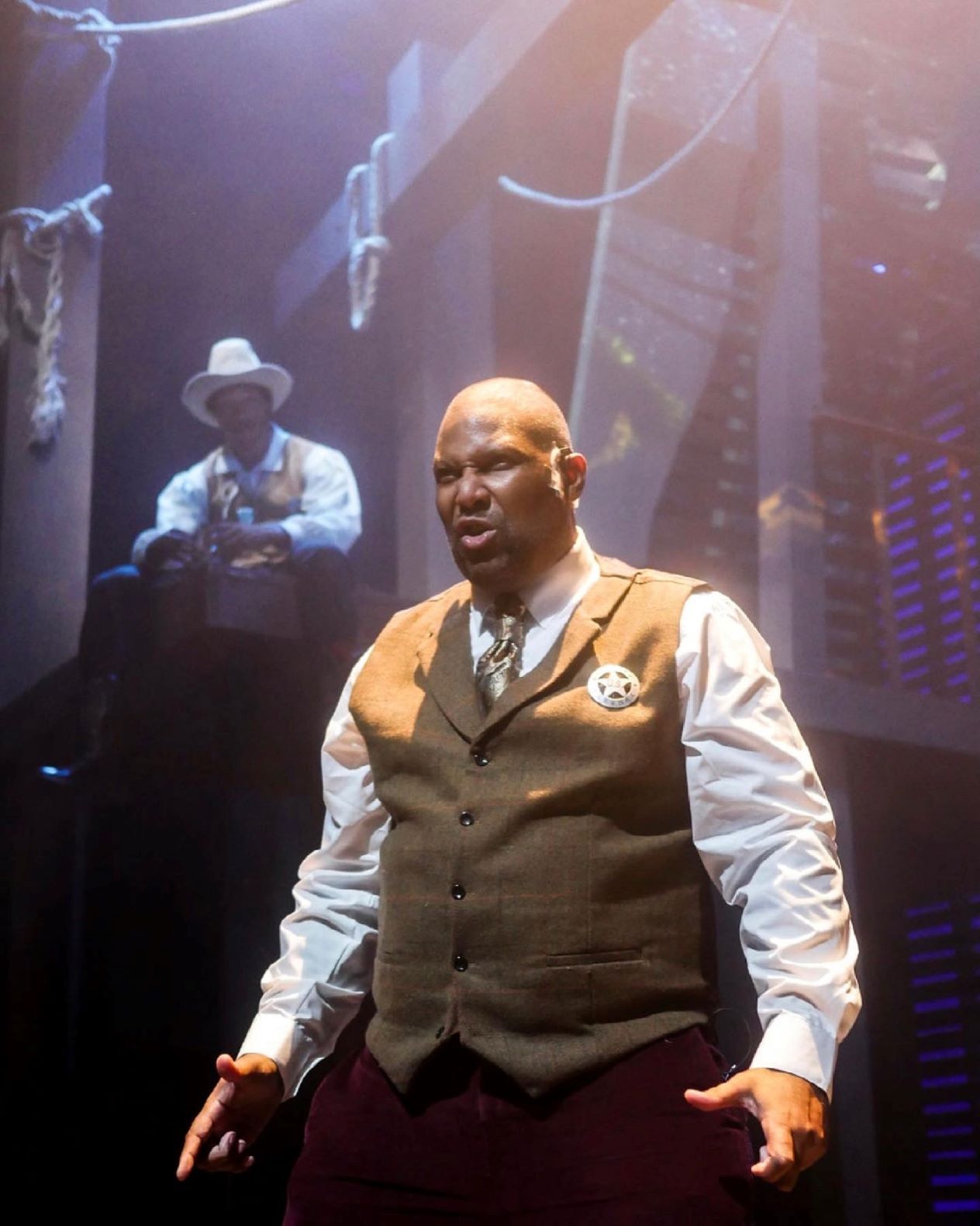 Playwright Layon Gray has a gift for turning a wide range of stories from Black history into engaging, thought-provoking 21st century drama.

Gray’s “Kings of Harlem,” about the professional New York Renaissance basketball team of the 1920s and ’30s, inaugurated The M Ensemble’s new space at Liberty City’s Sandrell Rivers Theater in 2017, winning four Carbonell Awards (including “Best Production of a Play”).

“Kings of Harlem” and Gray’s play, “Cowboy,” which premiered at the 2019 National Black Theatre Festival, are being developed as feature films. And his Off-Broadway play about World War II’s Tuskegee Airmen, “Black Angels Over Tuskegee,” is aiming for a Broadway transfer in 2022-23.

In the meantime, a new M Ensemble production of “Cowboy” has just opened, marking the 50-year-old company’s return to live indoor theater with a full audience.

Gray, who won a directing Carbonell for staging “Kings of Harlem,” is a triple threat in this “Cowboy”: He wrote, directed and stars in the play. 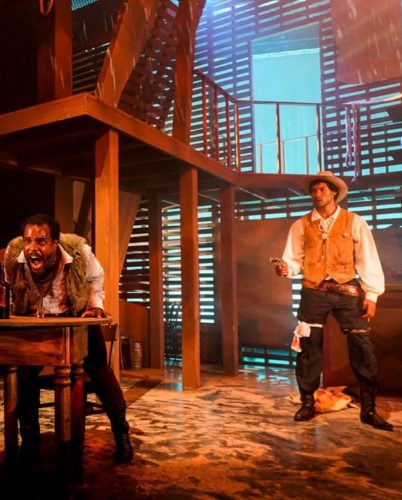 Charles Reuben Kornegay (left) as Gus Colton, a man on the run, is watched by Jaerez Ozolin as lawman Grant Johnson in “Cowboy.” (Photo courtesy of Christa Ingraham)

The New York-based Gray plays Bass Reeves, a real-life lawman who served in the Oklahoma Territory from 1875 to 1907 as the first Black deputy U.S. marshal west of the Mississippi. Reeves is said to have served as the inspiration for the character of the Lone Ranger and arrested more than 3,000 criminals in his long career, living to tell many a tale.

The one in “Cowboy” centers on Levi Colton (played by Reginald L. Wilson) and brother Gus (Charles Reuben Kornegay), an on-the-run pair headed for Mexico.  The developmentally disabled Gus is wanted in connection with the murder of a white man aboard a train. Reeves and Grant Johnson (Jaerez Ozolin), his half-Native American, half-Black deputy, have tracked the pair to an Oklahoma Territory saloon owned by Silas Cain (Isaac Beverly).

In his role as playwright, Gray heightens the tension by removing the possibility of escape. A storm and possible tornado are bearing down on Silas’ place so, for better or worse, the hunters and their quarry are trapped together.

Of the five men, only Silas was born after the end of slavery. The others have vivid, painful memories of enslavement, cruelty and familial loss — memories that shaped the men they have become, memories that linger and torment.

Bass’ tales document his wiliness as a lawman, but an especially heartbreaking one is about the way his mother coped with being expected to nurse her enslaver’s babies. Grant speaks of the Trail of Tears walked by his Chickasaw mixed-raced father and Creek mixed-race mother, when Native Americans were forced from their lands.

Levi revisits his 20-year search for Gus after the younger brother, brain-damaged at age 7 from being hit in the head with a brick by an overseer, was sold away as a child. Gus, who toggles between the childlike adult and an imaginary companion he calls Frank, becomes the center of two markedly different reenacted versions of the crime aboard the train.

Gray, who is also credited with sound and projection design, utilizes Mitchell Ost’s excellent atmosphere-establishing set and lighting (plus additional projection design) inventively and, near the end of the play, the set has a star turn of its own. Costume designer Shirley Richardson, who is also The M Ensemble’s executive director, dresses the characters with Old West flair. 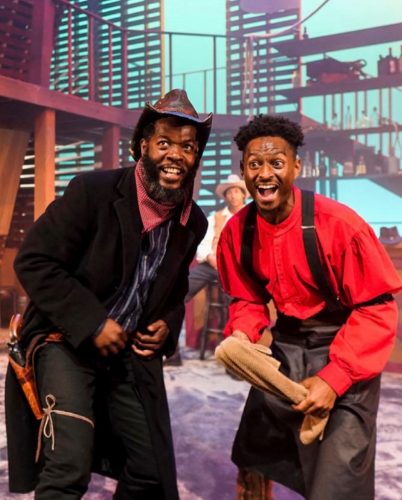 Working with the author-director, the cast of mostly New York-based actors (Beverly is a South Floridian) vividly brings Gray’s characters to life.

Wilson’s Levi is intense and wary, dedicated to protecting his long-lost brother at all costs. Kornegay’s Gus is a chameleon, more so than anyone including Levi knows. Ozolin’s Grant is a man of relatively few words but nonetheless a real presence. Beverly’s Silas serves as the play’s comic relief, a function the actor handles winningly.

The multitasking Gray is a memorable Bass Reeves, observant and clever and two steps ahead of everyone else. His speeches are key to the play’s richness and to the way it emotionally connects past and present. Occasionally, for all the actors, the sound design becomes more overwhelming than the underscoring it’s intended to be, so the audience needs to listen intently in order to mentally assemble all the puzzle pieces of Gray’s plot.

One more thing: The title refers to yet another illustration of slavery’s legacy, a story that’s key to the play. After experiencing “Cowboy,” you may never hear the word the same way again.

WHAT: M Ensemble production of “Cowboy” by Layon Gray