Thomas Wright “Fats” Waller was a prodigious composer, a great entertainer and a plus-sized pianist whose life ended way too early when he died of pneumonia on a cross-country train trip in 1943. He was just 39.

Thanks in part to the 1978 Tony Award-winning revue, “Ain’t Misbehavin’,” Waller’s musical legacy lives on. His wit (and that of his frequent lyricist, Andy Razaf), joy and famous stride piano style have been enjoyed by generations born long after Waller’s Harlem Renaissance heyday.

One example: Wilson has a non-speaking part as the nightclub’s waiter. He sometimes joins in the dancing or performs brief solos, adding some razzle-dazzle to the movement. But he way too frequently appears with “drinks” for the cast or comes out to clear glasses from the set’s two tables, pulling focus from whoever is singing. Just no.

The cast – three women, two men – perform on Rachel Finley’s elevated nightclub set. The show’s title, spelled out in large letters, hangs above the stage, and black-and-white photographs of famous black entertainers adorn the front of the stage at floor level. Guy Haubrich’s color-changing lighting is even part of the wood barrier separating the actors from the six-piece upstage band led by Alexander.  Shirley Richardson’s costumes make the gals look chic and the guys look sharp, though the wigs on the men seem an unnecessary nuisance.

Paulette Dozier, Asher Makeba and Deana Butler-Rahming all have a rich, powerful tone when they’re singing full out; these women can belt with the best of them. Don Seward, whose glorious bass-baritone was made for Waller’s music, becomes the star of the show by virtue of his performance skills and wondrous voice. Vlad Dorson, an engaging dancer, has problems with volume (he sounds almost muted compared with the other singers) and articulating lyrics. The latter makes his showcase solo, “The Viper’s Drag,” an underwhelming number – yes, the singer is sleepily celebrating the virtues of weed, but if you can’t clearly get what he’s saying, the humor goes up in smoke. 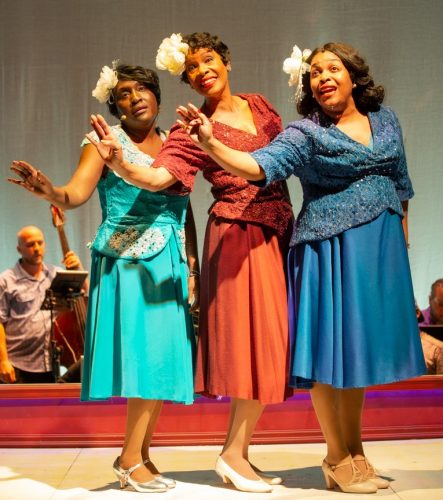 Highlights are dotted throughout the show. Makeba delivers a come-hither “Squeeze Me” and a memorable “That Ain’t Right.” Butler-Rahming slays on “Keepin’ Out of Mischief Now.” Dozier navigates the tricky “Cash for Your Trash” and sings an aching “Mean to Me.” Dorson has fun with Seward as the guys sing “Fat and Greasy,” and Seward kills on the comic novelty number, “Your Feet’s Too Big.” He’s great, too, as he sings “I’m Gonna Sit Right Down and Write Myself a Letter” – he’s the show’s Waller stand-in, though he’s tall rather than hefty – and his voice enriches the group numbers.

The show’s most intensely emotional number is the powerful “Black and Blue,” delivered by all five singers as a haunting lament about the disconnect between how they feel about themselves and the injustices visited upon them because of their race.

By rights, “Ain’t Misbehavin’” should be a slam dunk for The M Ensemble. But the sound balance between the band, which is visible but sitting lower than the playing area, and the actors sometimes obscures lyrics. Tonally, the performances range from straightforward to caricatured. Adjustments can and should be made so that the talent involved can soar.