Review: Long-awaited ‘A Wonderful World’ is wonderful in every way 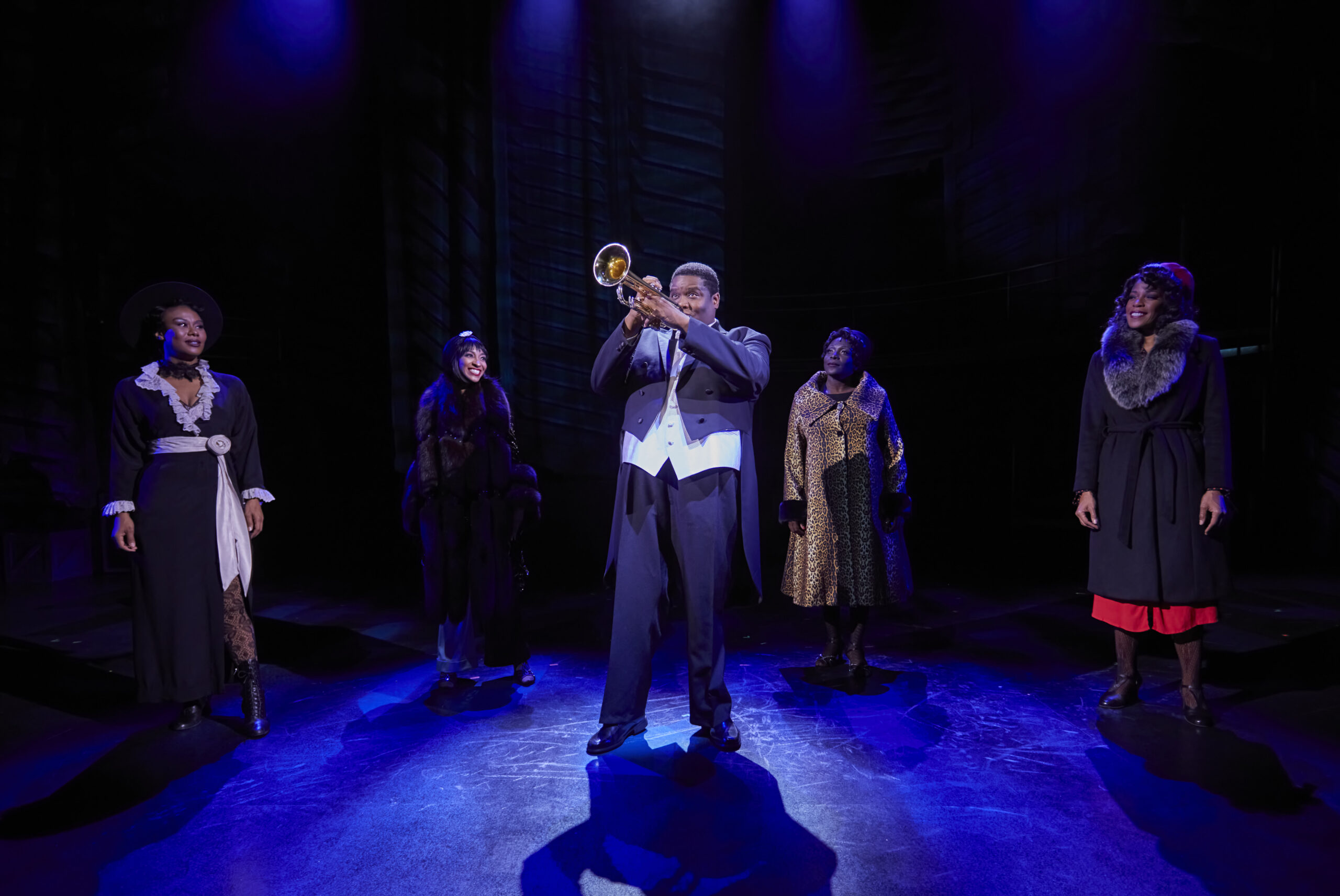 From the first words they utter in Miami New Drama’s world premiere musical, “A Wonderful World,” the women Louis Armstrong loved — the four that he married, at any rate — memorialize different versions of a flawed, complicated genius propelled by all kinds of desire.

To Daisy Parker, a hot-tempered New Orleans prostitute, he was passion and turmoil. Chicago pianist Lil Hardin helped transform him from a country boy with “a $5 smile in a $2 suit” into a slick, in-demand musician. Alpha Smith developed a taste for the finer things during his Hollywood years but never fully sated his restless passion and domestic desires. And former Cotton Club performer Lucille Wilson, the savvy partner in his longest-lasting marriage, found a way to make her deal with the wanderlust-driven devil work.

Celebrated as a jazz genius, remembered for his larger-than-life personality and gravel-infused singing, the offstage/offscreen Armstrong was a man with a gift for getting into and out of trouble. His contradictions and complexities — the good, the bad and the ugly of an extraordinary American life — are woven artfully through the storytelling in “A Wonderful World,” thanks to an uncommonly layered, nuanced and contextually rich book by playwright Aurin Squire. 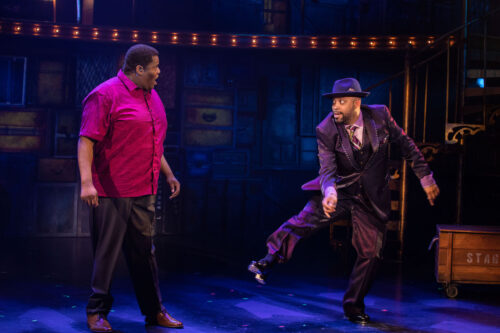 Juson Williams, left, as Louis Armstrong and Jason Holley as Lincoln Perry have a dance-off in “A Wonderful World.” (Photo courtesy of Stian Roenning)

The songs in the show’s glorious score are mainly standards associated with Armstrong. Brilliantly arranged by musical supervisors Michael O. Mitchell and Annastasia Victory, the numbers (some full, others fragments) have been placed so that the lyrics amplify or comment on the drama of the moment.

After a 638-day pandemic pause between the final 2020 preview performance and the opening of the 2021 version of the piece, “A Wonderful World” is at long last up and running at the Colony Theatre on Miami Beach’s Lincoln Road.

Getting “A Wonderful World” to this point in its evolution — a word that implies it will have an ongoing, larger life in many cities, which it should — has presented Miami New Drama with myriad challenges, not the least of which was the long COVID-19 shutdown. Some roles had to be recast. Illness hit several actors during the most recent previews, and an understudy performed as Daisy on opening night. Two different rounds of enhancement money were necessary to pull off the most lavish show in the company’s history.

But finally, the creative and financial investments have paid off.

As director, Broadway and West End veteran Christopher Renshaw has worked with his inspired creative collaborators to deliver a highly entertaining, engrossing portrait of a great Black artist shaped by his environment, American society and his own seemingly insatiable desires.

This iteration of Louis Armstrong, played by Juson Williams with abundant charisma, torment and an undercurrent of menace, isn’t just the influential jazz innovator and smiling trumpet virtuoso familiar from his days as a Hollywood performer and later-life American icon. The Armstrong of “A Wonderful World” is a warts-and-all, fallible human being — in great part because of Squire’s choice to present him from the perspectives of the four women he loved and hurt.

Armstrong’s early life in New Orleans comes first, with Squire touching on his rough upbringing in a neighborhood called the Battlefield, his constant hustle to survive, his time in a reformatory for firing a gun. At the Colored Waif’s Home, bandleader Professor Davis (Jason Holley) changes the course of Armstrong’s life by teaching him to play the cornet; later, playing aboard Mississippi riverboats, Armstrong learns to read music from bandleader Fate Marable (Paul Louis).

But his relationship with Daisy Parker (understudy Dori Waymer, subbing for an ailing Christina Sajous) is the connecting thread in that chapter of his life. 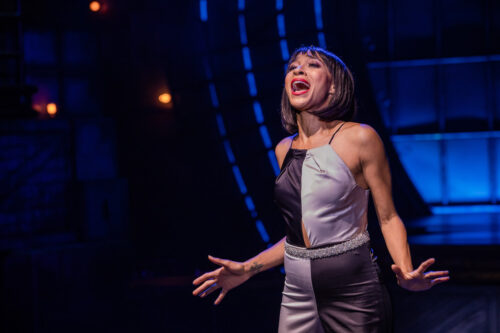 Beautiful, volatile, knife-wielding Daisy works in a brothel and at first sells her services to the rough-edged musician. (“People say I have a little bit of a temper,” she observes dryly, more than once.) After relentless wooing and a spirited duet on “I Can’t Give You Anything but Love,” they wed. But a working musician’s home is on the road (or in the young Armstrong’s case, the river), so before long he proves to be a love-’em-and-leave-’em husband.

In Chicago in the 1920s, he starts working with bandleader King Joe Oliver (a charismatic Gavin Gregory), tries to duck gangsters on his tail, and woos piano player Lil Hardin (Allison Semmes). Armstrong’s relationship with Lil begins on the bandstand and ends in bed, with Lil polishing his style and image, and Armstrong making her his Mrs. #2. Daisy isn’t entirely out of the picture, though, and when she shows up in the Windy City to confront her ex and his ambitious spouse, the women engage in the vocal equivalent of a knife fight as they sing a fierce version of “Mack the Knife.”

After a row with Lil, who has grander ambitions for herself and her unfaithful husband, he meets two key figures in the next chapter of his life.

Before too long (because that’s how things flow in musicals), Glaser will violently “persuade” Armstrong’s perpetually inebriated, ineffectual Irish manager Johnny Collins (Daniel Barrett) to let him guide the rest of the musician’s career. Armstrong decamps with Alpha for Hollywood where, after a rough start, he breaks into movies bigtime — and the now-glamorous Alpha spends money like there’s no tomorrow (whenever she’s not making him the rice and beans he craves, or trying to help him realize another dream by making him a daddy).

After Alpha, impatient with her husband’s constant touring and betrayals, turns the tables on him and leaves, Armstrong embarks on his life’s last chapter in New York. By his side on and off from their marriage in 1942 until his death in 1971, ex-showgirl Lucille Wilson (Darlene Hope) weathers his frequent infidelities and proves herself an indefatigable “researcher,” getting the goods on greedy Joe Glaser’s personal life and Armstrong’s extracurricular activities to ensure she’ll get what she wants: a home in Queens, if not a family.

That’s a lot of content to pack into a 2 ½-hour musical, but Squire does much more. He contextualizes what happens to Armstrong, his choices, his failures, his triumphs, within the Black American experience.

An innocent young riverboat musician is lynched after a false accusation by a white woman, and the memory haunts Armstrong for life. In a dazzling meta moment, Armstrong learns from masterful millionaire Lincoln Perry, aka Stepin Fetchit (also played by Holley, in a brief but undeniable tour de force), how to turn what white audiences love about Black entertainers into big bucks he can keep instead of giving his dough to exploitative managers. After the civil rights movement takes off, he publicly — and explicitly — unleashes his rage.

Thanks to enhancement money, Miami New Drama has been able to give “A Wonderful World” the artistic sendoff it deserves.

Williams is, of course, the focal character, and his transformation from a gullible New Orleans innocent into an artist who pours his aching soul into each word of “Black and Blue” is a wonder. So, too, is the way he delivers the moment when he alters his normal higher singing and speaking voice — Armstrong is hacking from cold nights on the riverboat — into the lower, grittier sound he uses for the rest of the show. 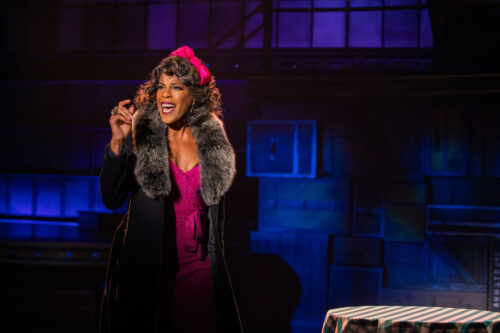 Substituting for Sajous on opening night, Waymer is a wary, alluring and dangerous Daisy.  Semmes is chic and all business as Lil. Henry, best known in South Florida as a virtuoso jazz singer, is a visually and vocally gorgeous Alpha. Hope brings her deeper voice, gravitas and intelligence to Lucille. When the four sing “St. James Infirmary” to the ailing man they all have loved, the number is as good as anything you’ll hear in any musical.

From the leads to the ensemble, everyone in the show is at the top of his or her game, including Lindsey Corey (who has a trio of comic moments as a Chicago lady of the evening, an eager reporter and an appalled White House assistant), Ashley McManus, Alysha Morgan, Khadijah Rolle, Brett Sturgis, Kevin Tate and Donesha Rose.

Rickey Tripp’s choreography and musical staging require great dancers, and “A Wonderful World” has them in abundance. Sometimes in musicals, dance sequences can feel like fillers, but Tripp’s are worth savoring.

Even erasing the pandemic from the equation — not possible, of course — the making of a new musical is a hugely challenging collaborative endeavor. Under artistic director Michel Hausmann and managing director Nicholas Richberg, Miami New Drama has devised one about a music and showbiz icon, a piece with a powerful point of view, a show that deserves to be seen in the spot where it was created.

For the holidays and beyond, that is something wonderful.

WHAT: Miami New Drama production of “A Wonderful World,” by Aurin Squire