Review: Like ‘SNL’ in the early days, ‘Not Ready For Prime Time’ is a work in progress 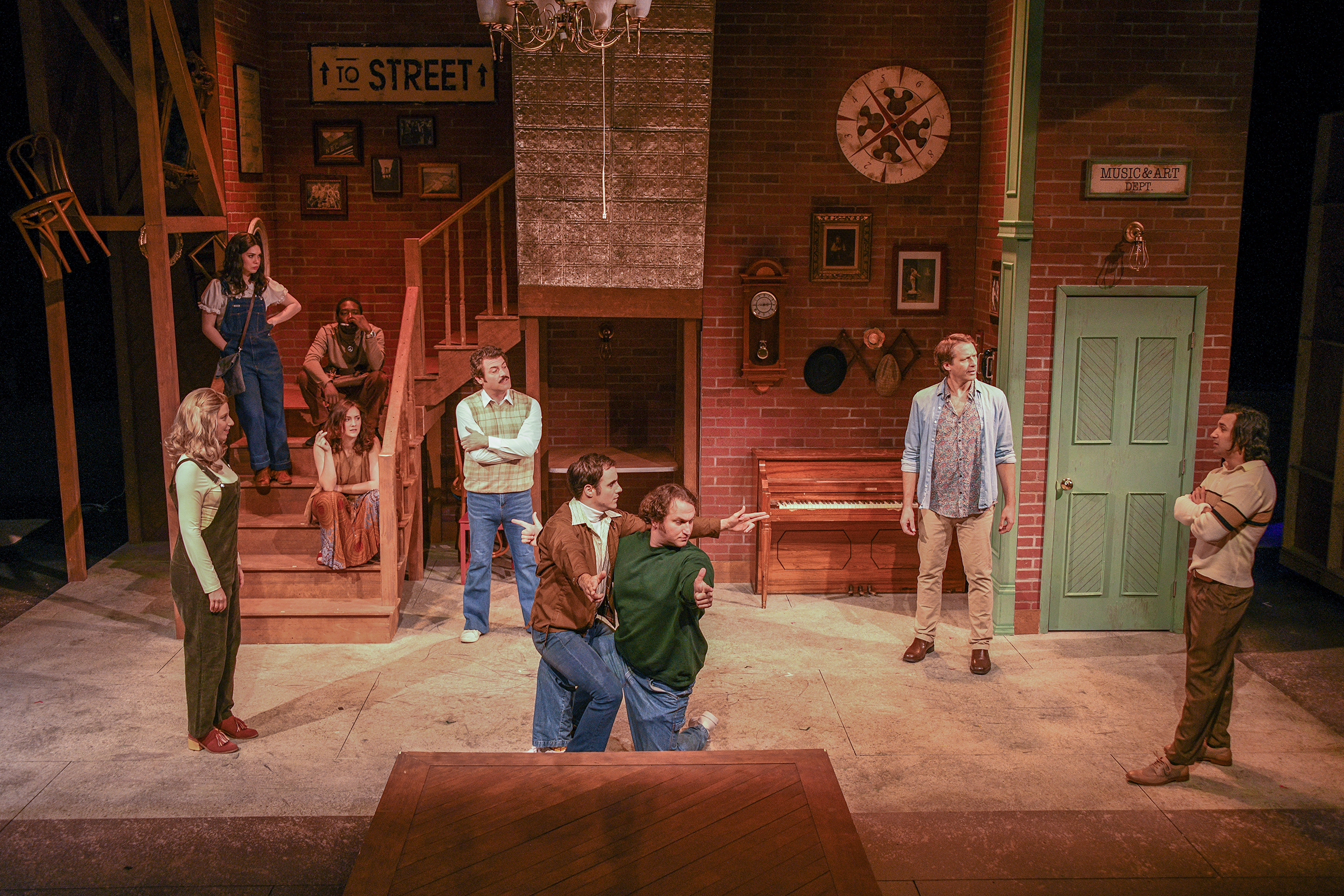 So much has happened since “Not Ready for Prime Time,” a play by Miamians Erik J. Rodriguez and Charles A. Sothers, first made audiences laugh.

Two years after the play’s 2014 world premiere production by New Theatre at the South Miami-Dade Cultural Arts Center, that influential South Florida company (which commissioned and premiered Nilo Cruz’s Pulitzer Prize-winning “Anna in the Tropics”) went out of business.

But Rodriguez and Sothers (the latter the cofounder and artistic director of the nonprofit youth company, Roxy Theatre Group) kept the faith and kept working on their script about the launch and early years of NBC’s now-iconic, late-night comedy show, “Saturday Night Live,” aka “SNL.”

The pair forged new relationships with producers. Miami-Dade County built the sleek new Westchester Cultural Arts Center at the entrance to Tropical Park and chose Roxy to manage the facility and its 200-seat, black-box theater. A planned relaunch of “Not Ready for Prime Time” on New Year’s Eve 2021 was postponed as the COVID-19 pandemic lingered. Then, a key producer of the show, George Cabrera, died suddenly of a heart attack in late January at age 44. 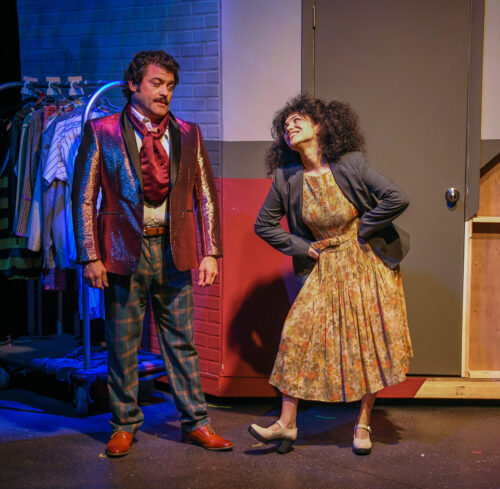 Through it all, “Not Ready for Prime Time” keeps moving forward – and now it’s back with a fresh production and a second chance.

Running through April 17, 2022, at the Westchester center, the production has been shaped and staged by director Conor Bagley. The audience is asked to play along, with theatergoers pretending they’re at a live taping in Studio 8H at 30 Rockefeller Plaza in Manhattan. A four-piece band holds forth, and when “Applause” signs are illuminated, the enthusiastic crowd is only too happy to oblige.

The show’s narrator – at least through the first act of a play that runs well over 2 1/2 hours, with intermission – is the man who created “Saturday Night Live,” Lorne Michaels (Chris Ferrer). The Canadian producer and showrunner, who (except for a five-year period from 1980 to 1985) has been at the helm of “SNL” since it launched in 1975 with George Carlin as host, tells us up-front exactly the kind of subversive late-night comedy show he’s determined to create: something “absurd, young and hip … and if you don’t like it, get the f**k out of the way.”

So within minutes, the audience gets not only the measure of Michaels but an idea of just how uncensored this trip through early “SNL” history will be.

Since the original “SNL” material is copyright-protected, Rodriguez and Sothers have written sketches for the cast to perform. Some are quite funny. Others, not so much. There are depictions of or allusions to Belushi’s memorable samurai, the Coneheads, Murray’s cheesy lounge singer, the “Nerds” sketches with Radner as Lisa Loopner and Murray as Todd DiLaMuca. Chase sits at the Weekend Update anchor desk, deadpan and ever-ready for a pratfall. 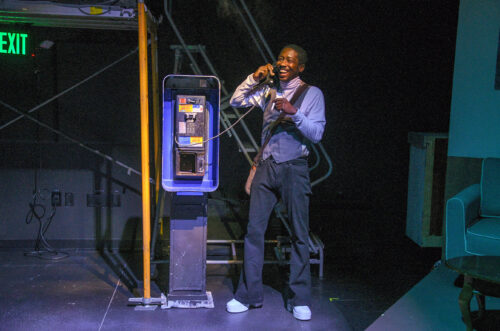 But – and this is a big but – for all the laughs, the playwrights remain focused on illuminating what went on behind the scenes.

“Not Ready for Primetime” is overstuffed with exposition (it could easily be trimmed by 20 to 30 minutes). The flaws of nearly every character are revealed then reemphasized: the drug habit that would kill Belushi at 33; Newman’s heroin use; Morris’ drug use and roiling anger at workplace racism; Radner’s bulimia and loneliness; Aykroyd and Murray’s damaging womanizing within the cast. That warts-and-all look at the dark side of success gets hammered home, again and again and again.

Another challenge for Bagley and the performers has been deciding how closely the actors should hew to the stars they’re portraying without doing an impersonation. Mostly, the actors play a dichotomy: There’s a difference between their persona as an “SNL” star doing a sketch and who they are in writing sessions or personal encounters.

Corton, for example, is quite deft in the way she evokes Radner as Lisa Loopner, Baba Wawa or Roseanne Roseannadanna. But when she’s “just” Gilda, she comes off as a pretty, sweet young woman who’s not easy to tell apart visually from Lopez’s perpetually dissatisfied Newman. Isaacson plays the most arguably adult performer in the bunch, but isn’t much like Curtin at all.

Crout, who looks a lot like Belushi and can skew his face in the same here-comes-trouble way, is compelling even if he doesn’t radiate a similar sense of unpredictable danger. Lugo is a charismatic actor who isn’t a bit like Aykroyd, nor does he bother with Aykroyd’s Canadian-flavored accent.

Scott is stuck playing Chase as an insufferable, insensitive narcissist – which he does well – but he is a much finer actor than you would know from his character here. Randle is really fine and furious as Morris, and the staging emphasizes the performer’s sense of exclusion.  The handsome Granado, who is fine as Michaels’ supporter and foil Ebersol, isn’t at all like Murray but rises to the occasion in his bits with Corton’s Radner. Ferrer is both a steady hand and a sometimes volatile and foul-mouthed presence as Michaels in the legendary producer’s youth. 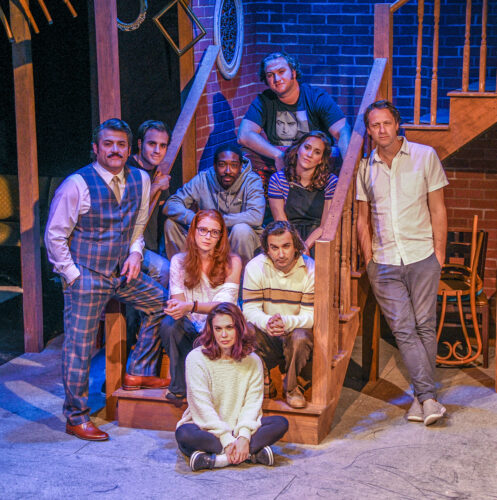 The cast of Erik J. Rodriguez and Charles A. Sothers’ “Not Ready for Prime Time” assembles on the set. (Photo/George Schiavone)

The design team, working within the theater’s limited black-box space, gets the ’70s vibe right, from Jorgina Fernandez’s costumes (check out Morris’ white platform shoes) and Cindy Pearce’s wigs (none more striking than the one for Roseanne Roseannadanna) to Andrew Rodriguez-Triana’s necessarily compact set with its movable side units. Sound designer Ulises Otero, lighting designer Tony Galaska and music director-keyboard player Douglas McCall all contribute to the “SNL” vibe.

Like Michaels since the nascent days of “SNL,” this play has ambitions.

Those involved with the play would love for it to have a larger, longer life, and it’s a good thing that – thanks to the Roxy Theatre Group, Grove House Productions and Broadway Factor – the script is getting a second look with Bagley at the helm and new actors in the roles. Truth be told, the audience – unmasked, sipping wine and ready to party – laughs a lot and seems to have a great time.

Could “Not Ready for Prime Time” be better, more incisive, more balanced in its depiction of the highs and lows of the characters’ lives, on TV and off? Yes. That’s part of new play development, and it can make all the difference.

WHAT: “Not Ready for Prime Time”

To read a preview of this play, click here.