Review: It’s a game of cat-and-mouse in two-person thriller ‘Borrowed’ 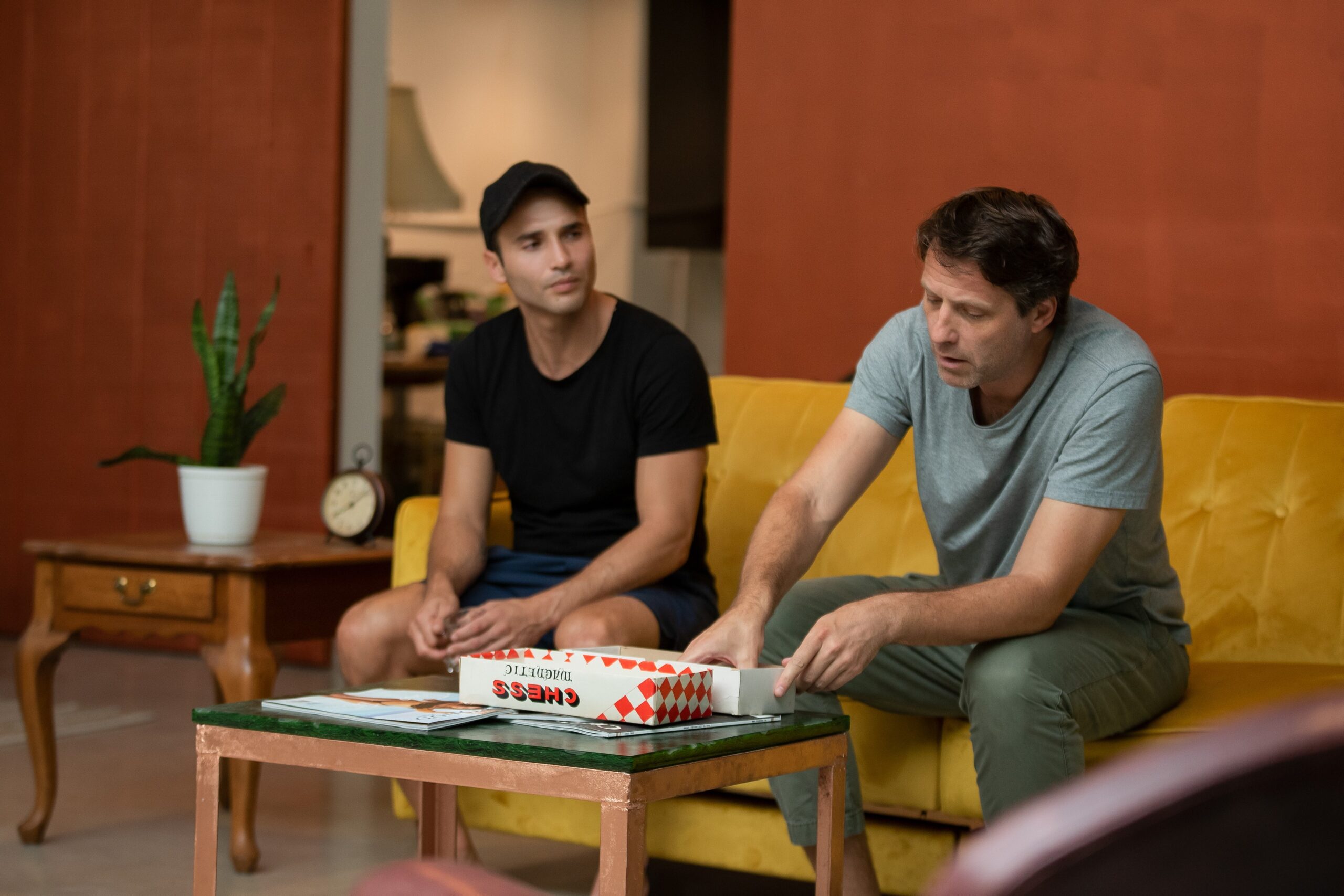 Ernesto Reyes as Justin and Caleb Scott as David in the world premiere of Jim Kierstead’s “Borrowed” at House of Games at Miami Ironside. (Photo courtesy of Melissa Almaguer)

After previous iterations as a 2020 pandemic Zoom reading and a film that debuted at the Miami Film Festival in March 2022, “Borrowed” is now getting its stage world premiere in the House of Games space at Miami Ironside.  You can find the sprawling complex of shops, restaurants and offices at 7610 NE 4th Court in Miami, not far from Biscayne Boulevard and NE 79th Street. If you’re hungry before or after the show, grab a bite at the inviting indoor-outdoor spot Ironside Pizza.

Produced by Broadway Factor’s William Fernandez, Deborah Ramirez and Kierstead – the team that, with the late George Cabrera, was behind Miami’s long-running theatrical experience “Amparo” – “Borrowed” is a deliberately disturbing thriller.

The list of content warnings you’ll find in the digital program is 10 items long, and it includes violence, kidnapping and four kinds of abuse (physical, verbal, sexual and mental).  You are warned.

You’re also told that, once the play begins, do not leave the intimately immersive performance space – if you do, you can’t come back in.  That makes sense, as anyone bailing to use the bathroom or whatever would disrupt the show since the actors use nearly every inch of the converted event space.  Best to put that out of your mind, though, or you may start feeling like the younger of the two characters – trapped in a no-exit situation. 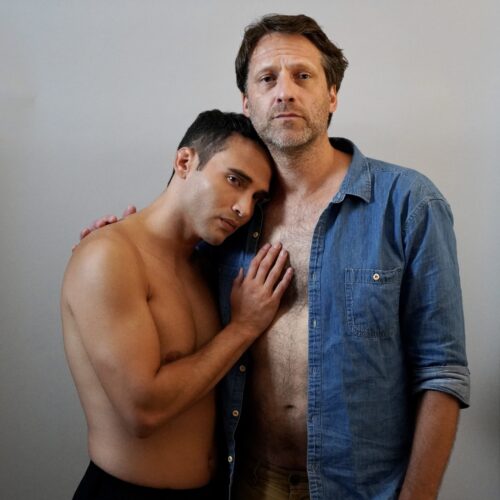 Ernesto Reyes as Justin, left, and Caleb Scott as David in the world premiere of “Borrowed” by Jim Kierstead at Miami Ironside House of Games. (Photo courtesy of Lyvan Verdecia)

In fairness to future audiences, some of the plot points of the 90-minute play need to be revealed in the moment. What is or isn’t a spoiler can be debated, but we’ll try to remain as spoiler-free as possible.

“Borrowed” unfolds in 2010 in a small, less-than-chic New Jersey cottage near the Hudson River.  Though the place is modest and isolated, it provides a bonus for amateur painter David (Caleb Scott):  a multimillion-dollar view of the water and the Manhattan skyline.

An Army veteran, David is a damaged man. A thicket of red scars on his face makes “hookups” recoil.  A brace helps with a knee ruined by a grenade.  Self-loathing misery masquerading as machismo, hair-trigger violence and hurled epithets are all part of David’s arsenal when things so south – which they do, almost instantly – once his younger visitor shows up.

Justin (Ernesto Reyes), a handsome Latino who often seeks out older men for sex, shows up late then takes one look at David and nervously starts making excuses about having to leave for a party in the city.  But David, primed by his flirty text exchanges with Justin, wants what the younger man promised to provide.  After trying persuasion, David makes a decision: he locks the door and refuses to let Justin leave. 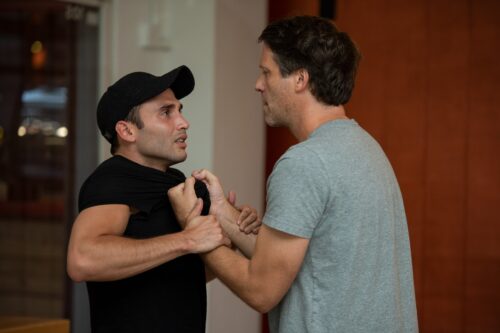 What happens over a long night and morning is a mixture of fear, intimidation, violence and revelation.  The balance for director Melissa Almaguer, assistant director Natalie Cabo and the cast is a tricky one.

The audience has to feel the tension between the demanding David and the panicked Justin, but it also needs to surrender to the storytelling and attempts at connection when the men share some gentler moments or talk about their histories – Justin’s as a teen whose attachment to older guys began with a teacher and a friend’s father, David’s as a married man who concealed his sexual orientation and fathered a deeply troubled son.

Though David insists he has merely “borrowed” Justin for a while, that’s semantic manipulation. Justin knows he’s being held prisoner, so in the moments when he’s pleasant or charming, survival is underpinning his actions.

“Borrowed” is a two-hander, and so much depends on the performances.  In this world premiere production, that balance (much like the ebb and flow of tension) is unstable.

Scott is by far the more experienced and technically skilled actor.  His David is frightening and intimidating, whether he’s belittling Justin by bellowing homophobic epithets or demonstrating his combat-honed physical dominance.  Do we feel for the character? Maybe, somewhat, by the end of the play.  But Scott’s portrayal of a haunted, troubled man is so effective that you may find yourself shrinking back in your seat any time he moves closer to you.

As a young man whose inattentive father helped shape his desire to please, Reyes is frightened, pleasant, and sometimes miserable.  Mostly his Justin is watchful, except when he’s making an ill-fated attempt to escape.  A more scheming, manipulative Justin would help even the cat-and-mouse game between the two. 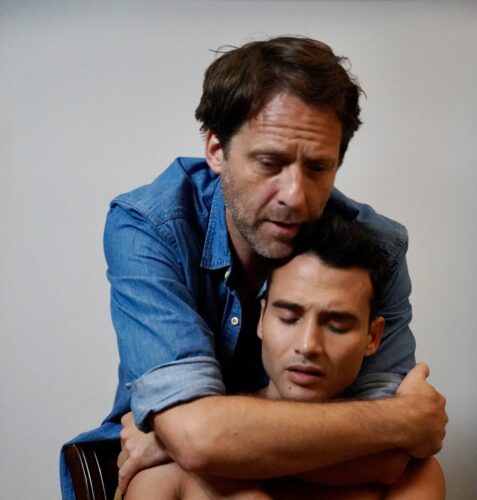 Set/prop designer Jennifer Ivy, lighting designer Tony Galaska, sound designer Ernesto K. Gonzalez, fight choreographer Lee Soroko and intimacy director Nicole Perry have all contributed to crafting a production that can feel claustrophobic in its in-your-face danger. It is jarring (Gonzalez provides a metallic sound effect to emphasize the more frightening moments) and it is provocatively creepy (as when David “disciplines” Justin). There are some laughs in “Borrowed,” but they’re few and far between, as you’d expect from a play that burrows into two men’s psyches.

The script is more the work of a craftsman than a writer with a distinctive voice, though Kierstead’s master’s degree in psychology informs that facet of his storytelling.

“Borrowed” is a small-scale play that could be easily produced by any company looking for an intense, shocking drama.  Since the producers are aiming for an Off-Broadway production, a rewrite that would make Justin a cagier character and stronger adversary could heighten the play’s impact.

WHAT: “Borrowed” by Jim Kierstead