Review: In ‘Wynwood Stories,’ characters battle over the future — and past — of a neighborhood 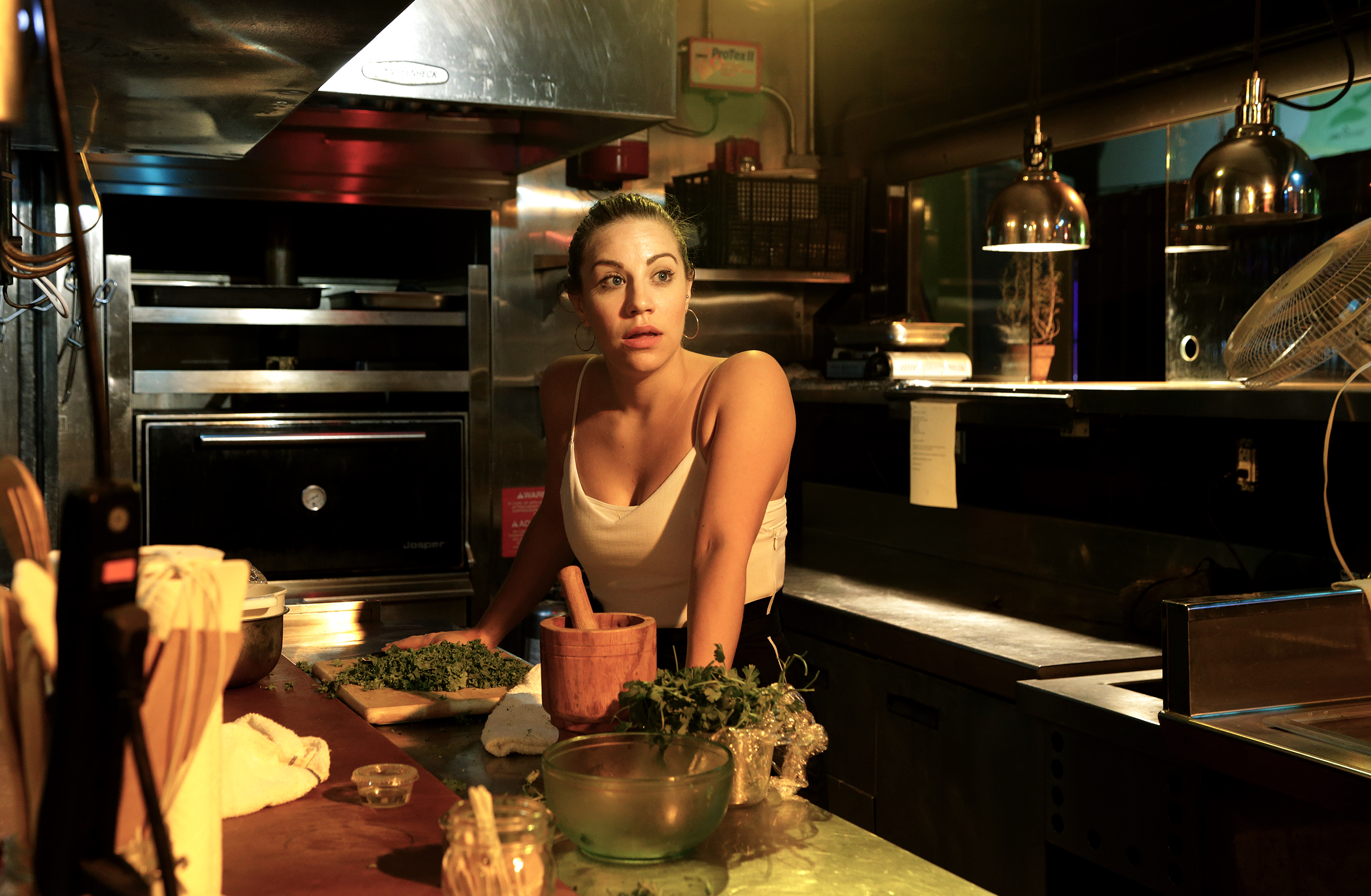 As we spend our days forging ahead, most of us rarely stop to consider the history embedded in the places we call home. Juggerknot Theatre Company and resident playwright Juan C. Sanchez are dedicated to providing dynamic, artistically provocative dives into different Miami neighborhoods through immersive theater experiences.

Two editions of Juggerknot’s “Miami Motel Stories” thrust Little Havana and the MiMo area along Biscayne Boulevard into the spotlight. Now, as the popular Wynwood Yard nears the end of its run as a hot spot for food, music and fun, Sanchez’s “Wynwood Stories” is illuminating an area that has evolved into a magnet for artsy types and culinary adventurers.

Because this world-premiere piece takes place in an open-air green space rather than an about-to-be renovated motel, the experience is necessarily different. The Wynwood Yard is up and running at the eastern side of the space, while the Juggerknot show occupies the western end.

When you arrive, it’s likely you’ll hear the thumping beat of a live band mixed with the chatter of diners and drinkers. How, you may wonder, can actors overcome that insistent sonic competition? Yet they do, through a combination of body mikes, vocal projection and an experiential story that keeps theatergoers engaged.

“Miami Motel Stories” took visitors into period-evoking motel rooms, two or four at a time, to silently watch actors perform short plays, then deposited the entire audience into an area where theatergoers could wander at will to have a more interactive experience with performers. “Wynwood Stories” is more like the latter: At each performance, two groups of 20 theatergoers each are together for an opening and closing scene, but in between each group is led through different scenes, pulled from one to the next by characters determined to share their perspectives on Wynwood. Credit director Tai Thompson for the smooth flow of these intricately timed, engagingly told stories. 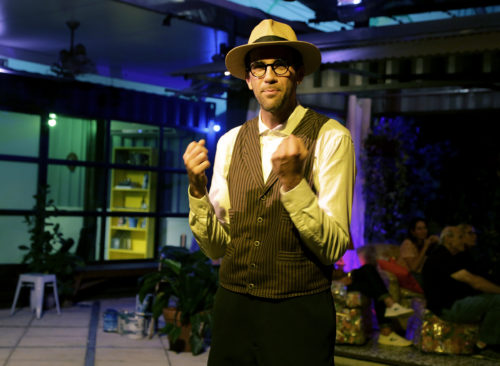 After interviewing a number of people tied to Wynwood’s history and folding their stories into the play’s 11 characters, Sanchez came up with an overarching theme: Most of the characters are certain that they represent or helped create the real Wynwood. And they’re angry that they haven’t been acknowledged or appreciated — or that the evolution of the neighborhood has forced them out.

Josiah Chaille — pronounced “shy” by actor Stephen Kaiser, “shy-yuh” by others, “shay-lee” by some of Chaille’s descendants — certainly has a claim to the ’hood. He created it, as Wyndwood Park, in 1917. Kicking off the show with a goofy, loose-limbed dance through a kitschy “magic” tunnel, Kaiser leads the audience into the show’s central space, where his Chaille then holds forth on how his contribution to Miami was just as significant as those of pioneers named Fisher, Flagler, Lummus, Brickell, Merrick, Tuttle, Collins and Lummus. Yet no one erected a statue of Chaille or named a significant building after him (though the family name is on the vintage Chaille Commercial Building, which runs from 425 to 429 N. Miami Avenue).

His smiling plea for postmortem recognition is interrupted by the Developer (Gregg Stuart Weiner), a man who made his mark in Wynwood in the early 2000s alongside visionaries like Tony Goldman. Although the Developer refers to himself and Chaille as “gods,” the two start arguing about Wynwood’s working-class past versus its arts-intensive present.

Then, Weiner — intense, charismatic, engaging — pulls a group into an air-conditioned space where the Developer holds forth on how he helped make a rundown, unsafe neighborhood a haven for gallery owners, muralists and those who like artistic experiences packaged as events.

The Gallery Owner (Susie K. Taylor), a chic Miamian who started her Wynwood gallery in 2000, stands by a piece in her soon-to-close space and speaks of art, commerce, gentrification and more. Taylor smiles and charms as she relates her story, but the tension that surfaces as she speaks reveals the Gallery Owner’s real feelings about what she views as being forced out of the neighborhood by development. 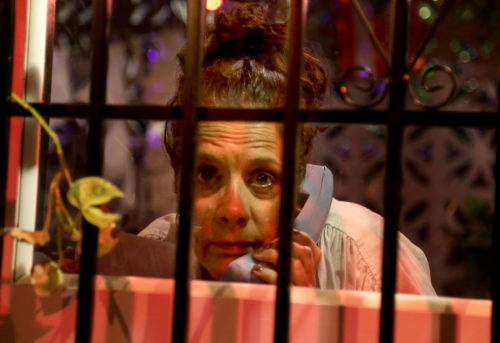 Tia Oneida, whose family lived in the neighborhood when it was known as Little San Juan, sold her home to Weiner’s Developer and still resents it. Although she’s fond of Catledge’s Seamstress, she also resents the waves of Cubans who came to Miami after the revolution and — as Tia Oneida sees it — took away jobs by agreeing to work for lower wages.

The Seamstress makes her own case for reinvention and surviving by doing her monotonous, repetitive work, while the Baker voices his opposition to the Puerto Ricans and Cubans who have made Wynwood a place he no longer recognizes. Gentle old Joe claims to have come up with the name for the Bakehouse arts space, but when he later intervenes in a physical fight between the Graffiti Artist (Rayner G. Garranchan) and the Muralist (A.J. Ruiz), he transforms into his angry younger self, railing about the area’s racist past.

Both the Graffiti Artist, who sells the transformational value of his bold artistic style in a monologue punctuated with f-bombs, and the Muralist, whose work is more commercial, believe they represent the artistic face of Wynwood, hence the beef turned physical.

The Hipster (Adam D. Crain), who presents himself as a kind of neighborhood ambassador, calls himself “Blake Wynwood” and serves up cocktails (yes, booze is a part of the “Wynwood Stories” experience). And the evening’s welcoming host, Della (Sandi Stock, playing Wynwood Yard founder Della Heiman), shares her journey from worldwide wanderer to Harvard Business School and culinary entrepreneur.

Some know-before-you-go advice: If the weather is hot and steamy, dress accordingly; you won’t be in air-conditioned spaces much. There are some seats scattered throughout the areas where scenes take place, but not enough for everyone, so wear comfortable shoes.

Die-hard “Miami Motel Stories” aficionados may not warm as much to “Wynwood Stories,” both for its structural differences and for the way many of Sanchez’s characters air their grievances. But the region’s growing number of immersive-theater fans are likely to appreciate and enjoy Juggerknot’s latest effort at telling Miami’s story, one neighborhood at a time.

“Wynwood Stories” is a Juggerknot Theatre Company production running through May 4 at the Wynwood Yard, 56 NW 29th St., in Miami. Performances are 7:30 and 9:15 p.m. Tuesday-Wednesday (plus additional performances April 28); 7:30, 9:15 and 10:30 p.m. Thursday-Saturday. Tickets cost $75 per track, with two tracks running simultaneously (students pay $25 if tickets remain before a performance); 877-504-8499 or TheWynwoodStories.com.