Review: In M Ensemble’s ‘The Old Settler,’ a sibling rivalry gets real 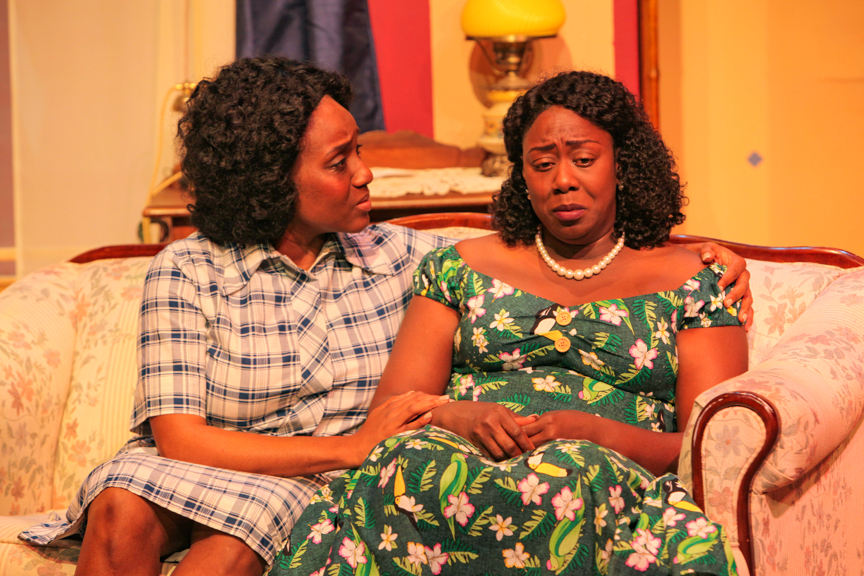 They are dressed in their Sunday best. The two sisters who share a Harlem apartment in John Henry Redwood’s “The Old Settler” at Miami’s M Ensemble have just come from a funeral. Their bickering and banter are, most likely, repetitive of a sibling rivalry that has been going on for years.

Quilly McGrath (Christina N. Alexander) is surly and mistrusting. Her dialogue is peppered with the word “shoot” after nearly every remark. To her, the world is full of inequities, and it makes her cynical. Redwood, however, doesn’t allow Quilly to be bitter. He’s wisely made her comical.

Two years her elder, at 55, Elizabeth “Bess” Borny (Toddra Brunson) is more pragmatic. In the autumn of her life, she’s ready to let some of her hurts stay in the past. One gaping wound, however, remains open, and it involves her sister.

The conversation at the beginning of the play weaves in and out, a quick volley between the two, with subjects ranging from why there is no food in the icebox to a questioning of Quilly’s choice of funeral attire. She’s accessorized with a pageant sash, announcing her membership in the Ladies of the Golden Scepter. “Don’t nobody in that church know nothing about no Ladies of the Golden Scepter,” Elizabeth tells her.

John Pryor’s swift direction gives way to the spot-on timing of his two leading ladies, as Brunson and Alexander, each in their contrasting characterizations, keep the energy high and the repartee tart. While the pacing never slows, the play, running through April 28 at Sandrell Rivers Theater, deepens when the story turns dramatic.

Another source of tension between the sisters: Elizabeth has a new boarder moving in. “We need the money,” she says. To Quilly’s horror, it’s a man. What will the Ladies of the Golden Scepter think?

The man is a country boy from Frogmore, S.C., who has come to New York to fetch his girlfriend, Lou Bessie Preston (Rachel Finley). His name is Husband Witherspoon (Scott Wesley), and someone’s husband he is going to be. Wesley plays the “gee whiz, yes ma’am” mama’s boy with the naivete of Forrest Gump. But Wesley gives the character a twinkling charm, a believability, never falling back on caricature. Finley’s Lou Bessie is a steamroller, busting into the apartment without a key or an invitation. Lou Bessie has changed her name to Charmayne, finding a place far away from Frogmore where she’s blossoming in the Harlem Renaissance. She disparagingly calls Elizabeth “the old settler.” To say any more about that would be a spoiler, since it is such a surprise moment in the play. 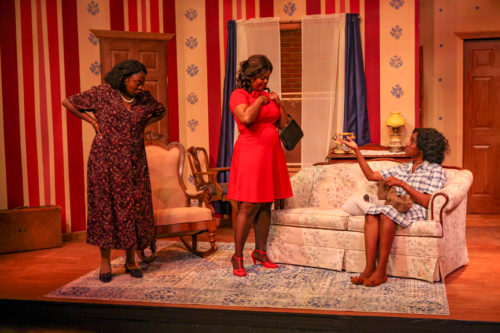 The title, “The Old Settler,” could easily conjure images of a play akin to the 19th century-set “Flyin’ West,” which M Ensemble presented in 2017, but Redwood’s tale is squarely set in 1943. America has Franklin D. Roosevelt in the White House, and the United States is embroiled in World War II. It’s unclear why Husband Witherspoon hasn’t been called up to join the armed forces, a missed opportunity by the playwright or director.

There are, however, many reflections on the state of the “colored people’s plight” in Redwood’s America circa 1943. The stories are almost always delivered by Quilly, the playwright’s commentator on social injustices of the time. She tells of the Kitchen Mechanics (a slang term for black maids and cooks who were employed in white homes). In fact, she is one, and Elizabeth had served a family, too. Segregation is a topic. Quilly recounts the travails of a woman and her children from church who are put off a bus in favor of white patrons.

The focal point of the women’s small apartment is a large window in the living room. Mitchell Ost’s realistic set design — with family photos on the wall to the left, and a small table, icebox and kitchen sink to the right — is nostalgic and perfectly atmospheric. The window serves as the women’s connection to the outside world. They live a few floors up from Harlem’s hustle and bustle, which continues through all hours of the night. Quilly glances across the street toward a hospital. “If you ever want to see what colored people do to one another, check out the emergency room on a Friday and Saturday night,” she says.

In places, “The Old Settler” calls to mind the realism of August Wilson, Tennessee Williams and other playwrights whose descriptive language is used to set up dialogue for social commentary.

Redwood imbued spontaneity in his script. In lesser hands, this could be missed, but director Pryor and everyone in his ensemble use it to great effect, with each actor bringing a naturalness to their character. Lines aren’t delivered; they are inherent.

In one of the most genuine moments, as Husband and Elizabeth “Bess” begin to connect on a deeper level, they find a kindred spirit in their Southern roots. She begins to stomp her feet and create a rhythm as she sings the down-home hymn “Satan, We’re Gonna Tear Your Kingdom Down.”

The tune was so familiar to the packed house at M Ensemble that the audience stomped and clapped along, amplifying the homey appeal of the carefully crafted production. While Redwood’s play can be predictable, the production ensures it holds its own as a comfortable dramedy. M Ensemble makes it easy to get caught up in Elizabeth, Quilly, Husband and Lou Bessie’s world for a couple of hours. Sit back and settle in.