Review: In Little Havana, Uncle Scotchy is serving up his heart and soul in immersive ‘Blues Opera’ 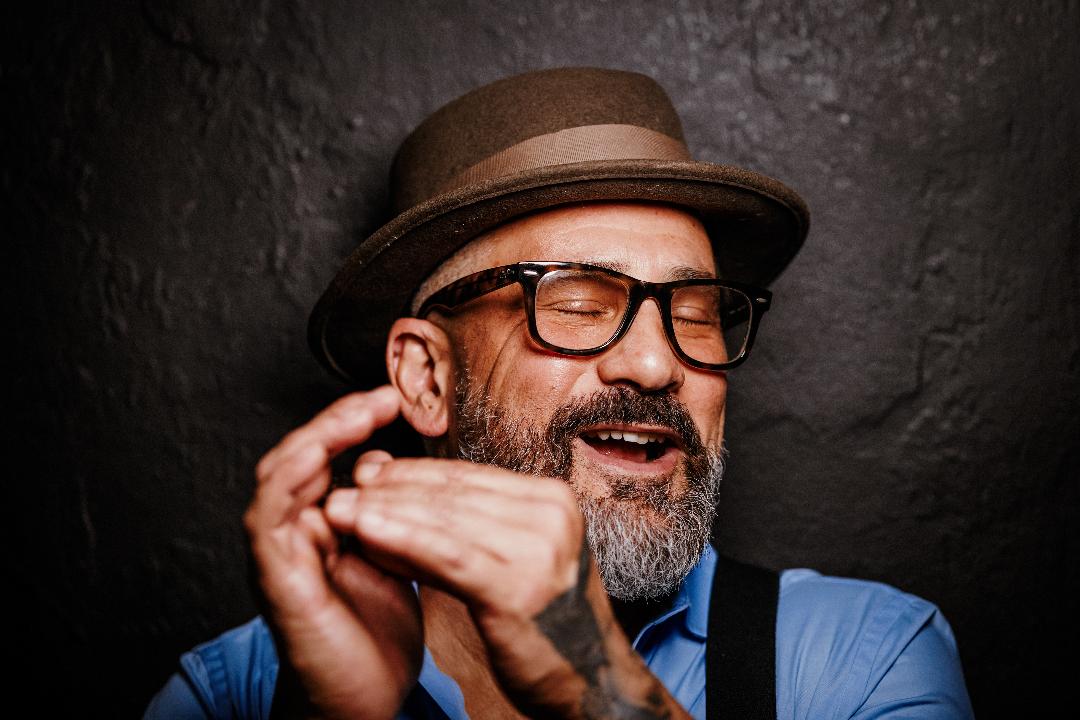 Eric Garcia, a.k.a. Uncle Scotchy, plays the blues and tells stories in Juggerknot Theatre Company’s “The Blues Opera,” an immersive theater show in a house in Little Havana, running Thursdays through Sundays until June 26. (Photo courtesy of Scott Mclntyre)

Eric Garcia’s friends told him he was a storyteller. He knew he was a musician. One friend told him he should combine the two and create an opera. An opera? “Yeah,” the friend said. “Something like a rock opera à la ‘The Who’s Tommy.’ ”

Well, Garcia was a blues musician, and he did have plenty of stories.

That’s part of the genesis of “The Blues Opera,” a one-man autobiographical experience. With plenty of help from the Juggerknot Theatre Company, “The Blues Opera” is another ace in Miami’s immersive theater experience scene. Known for its Miami Motel Stories series, Juggerknot’s first production, in 2017, was in Little Havana inside The Tower Hotel. Now it is the same Miami neighborhood to immerse an audience with Garcia in the company’s first one-person show.

This time the setting is a duplex just off Calle Ocho where the audience play “friends” invited over to Garcia’s Little Havana house for game night. 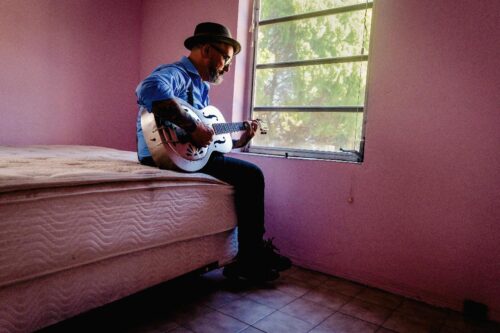 Eric Garcia tells personal stories about being a caregiver to his mother and father. Theatergoers move through different rooms of the house, including the pink room of his mother’s. (Photo courtesy of Scott Mclntyre)

The exact location is kept secret until only a few hours before the day of the performance. A text and an email arrive from “Uncle Scotchy,” a nickname Garcia earned because of his love for Scotch whisky. “It’s Uncle Scotchy here. I can’t wait to see you for game night at my house tonight!”

Scotchy gives you the address, tells you not to be late, to wear comfortable shoes, to bring a picture of your mom (yes, it can be on your phone), and most importantly, “bring your tough skin. My games are NOT Candyland.”

The experience begins from the get-go, really, just searching for the address. It doesn’t lead to a house but a Calle Ocho bakery. Out in front, a guide checks in ticketholders. Only 10 tickets are sold for each performance to keep it intimate — four performances per week, Thursday through Saturday evenings and Sunday afternoons.

Everyone gets a name tag and is handed a Sharpie. The name tag serves a few purposes, one of which is immediate —  your name on the sticker gets you a free croqueta inside the bakery. 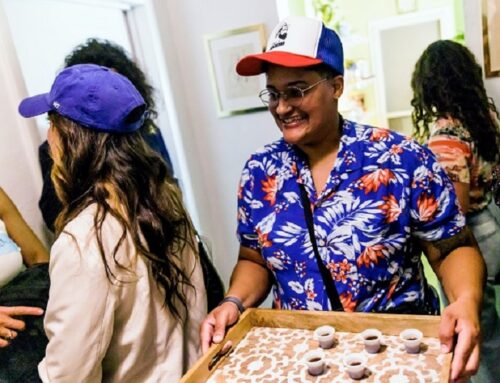 Adele Robinson is Scotchy’s “friend” who arrives to get everyone together for game night. She’s also the gracious hostess and guide. (Photo courtesy of Scott Mclntyre)

Once the group is checked in, Scotchy’s friend, Adele (actress Adele Robinson, who also works the show on-site as the production manager), shows up. She’s been sent to walk everyone over to the duplex.

Things kick off on a fun note on the short jaunt. Think kindergarten, think school patrol. Let’s leave it at that. No spoilers here.

Garcia, a.k.a., Uncle Scotchy opens the door. He’s dressed in a black tank top, black pants, and skin and arms full of tattoos. One that particularly stands out is that of an attractive woman on his left wrist.

Have a seat in the living room, and if you please, Adele will get you a Kentucky Owl Scotch whisky on the rocks.  Otherwise, there’s Perrier on ice in a bucket atop the coffee table.

Then, let the games begin.  Toss a soft fuzzball onto the wheel of fortune painted on the wall. Each one leads to a story. Participants get poker chips for hitting different subjects. Sande in the center is worth 50, other topics, such as Ballerina, I’m Late, and Mirror, for instance, are worth 20 and 10 points. 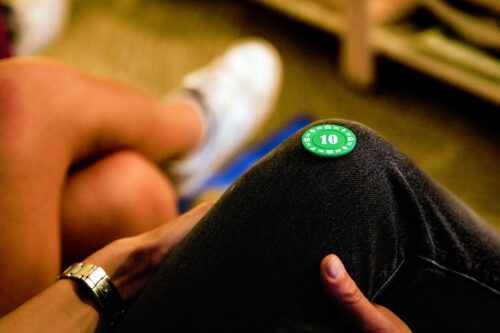 Poker chips are awarded as part of the interactive theater experience in “The Blues Opera.” Whoever racks up the most points gets a surprise at the end of the night. (Photo courtesy of Scott McIntyre)

Someone hits Song for 10. Garcia sits down at his one-man-band kit. Foot pedals hit against boxes for the drum beat, a hi-hat cymbal has a small rubber chicken affixed to the top. He plays a harmonica in a wire holder around his neck. He picks and strums his guitar. He trades off between harmonica and vocals. He sings the blues, a twist on the traditional “When I Lay My Burden Down.”

Hearing Garcia perform in this intimate space is a treat and yet another added bonus of “The Blues Opera.” In 2006, Garcia founded Juke, a touring blues band that’s played from Florida to Southern California. Garcia is a great musician.

The song’s over and it’s another person’s turn to toss the fuzzball. They hit the big one. Sande for 50 points. That’s when the whole of “The Blues Opera” comes to light. Sande is the woman drawn on Garcia’s wrist, his mother who was diagnosed in 2002 with early-onset Alzheimer’s disease at age 59. In 2009, she died. “People call those with Alzheimer’s disease patients, I call them victims,” Garcia says.

And this is what Garcia’s “The Blues Opera” is all about. His days of caregiving. The only son who became responsible for his two parents. If you ask him, he’d tell you he’d do it again.

The stories are personal and raw, and, yes, no Candyland. 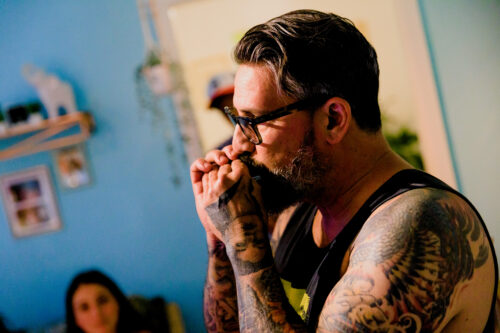 Blues musician and storyteller Eric Garcia takes an audience of 10 on a journey through a house in Little Havana in Juggerknot Theatre Company’s immersive “The Blues Opera.” (Photo courtesy of Scott McIntyre)

New York director, Ana Margineanu, who has collaborated with Juggerknot previously, is a master at site-specific productions. Her skill is what keeps the glue together here as she finds creative ways to keep the audience moving through the space. To get from the first set, the living room, to the next, we hear a voice that calls out to Garcia. It’s presumably Sande and he leaves for a minute. Adele motions everyone to follow.

Garcia’s in the bathroom with the door open so the audience can look in. It appears as if he is tending to someone. He stops and looks over. He tells of the many times he had to help his mother, unable to wipe herself after she had gone to the toilet. Alzheimer’s had robbed her of memory and daily living skills so that she couldn’t remember how to perform regular tasks, including how to lift up her pants.

Again, Sande’s voice calls from another room and Garcia goes in a flash. Adele leads the way to a small pink room. Garcia sits on the bed. There are more stories about Sande. The room is filled with authentic items, all from Garcia’s own collection, remembrances of his mother and father. Before everyone leaves the room to be shuttled on to the next, they are invited to stop and look at the mementos. There’s one of a young Sande as a ballerina, pictures of Sande with Eric as a boy, of Sande and husband, Victor, in their younger years.

A seamless but thunderous transition leads to the other side of the house. It soon becomes clear that the less colorful side and the dark living room signal the next chapter. This will be the location for the stories of Garcia’s father and the days post-Sande.

Now, it’s Garcia’s taking care of aging Victor, who is battling old age and physical infirmities and, most of all, doesn’t have a will to live.

Garcia explains that the living room where everyone is seated is an “escape room” where clues are scattered about to lead the audience into different areas. His stories lead to a prop, an umbrella, for instance, that leads to the next clue, a book, then a key that leads to a locked door.

We eventually end up in Victor’s bedroom. The day he arrived at the house to do his laundry like he always did. The day of Victor’s death in 2019. Garcia folds laundry while he recalls the details of the day. More personal items are in the room. Victor’s driver’s license sits on a nightstand by the bed. There’s an empty water bottle with a straw in it. 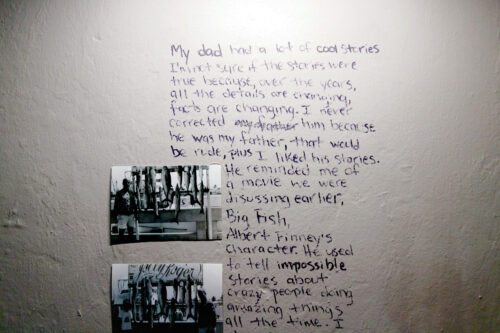 Handwritten stories are on the walls of Victor’s bedroom, along with personal pictures. (Photos courtesy of Scott McIntyre)

The gray walls of the room have text handwritten on them. Photographs are tacked up around them. They are more stories, more of Garcia’s memories, yet they elicit a feeling of a prisoner’s scrawls.

They are part of the culmination of the experience. They are also a theatrical diversion so that as the audience is looking around the room, Garcia can slip out and get ready for the final scene.

He’s ended up outside of the bedroom in the hallway seated in a chair in a shadow box. The group is led out. There’s a red light overhead and the rest of the area is pitch black. He looks like a bluesman, wearing a derby hat, suspenders, a jacket, dress pants, and nice black shoes. It’s time for his final soliloquy.

He talks about the loneliness he suffered after both parents were gone; the feeling of a lack of purpose now that he wasn’t a caregiver. He speaks about the girlfriend who left him. And what everyone could relate to regarding isolation during two years of the pandemic. It’s the final baring of his soul. “The Blues Opera” is an emotional catharsis and a way for him to purge the demon that haunted him, he says, by allowing him to finally bring his  darkness into the light.

“The Blues Opera” leaves you wanting more – more of Scotchy’s soul-baring stories and music, more of Adele’s hospitality. By the end of a quick 90 minutes, you and the others have bonded through the parlor games, drinks of whisky, Perrier, Cafecito, and the black-and-white cookies served from what looks like it could have been Sande’s favorite glass-domed cake dish. But especially the time well spent with Eric, Sande and Victor Garcia.

The exit leads to the home’s backyard where there’s a chance to stick around to mingle, grab another drink and hang out for a while. It’s another wise director’s choice. After being immersed in Scotchy’s world, it takes a little time to ease back into reality.