Review: In Carmen Pelaez’s ‘Fake,’ the truth is worth fighting for 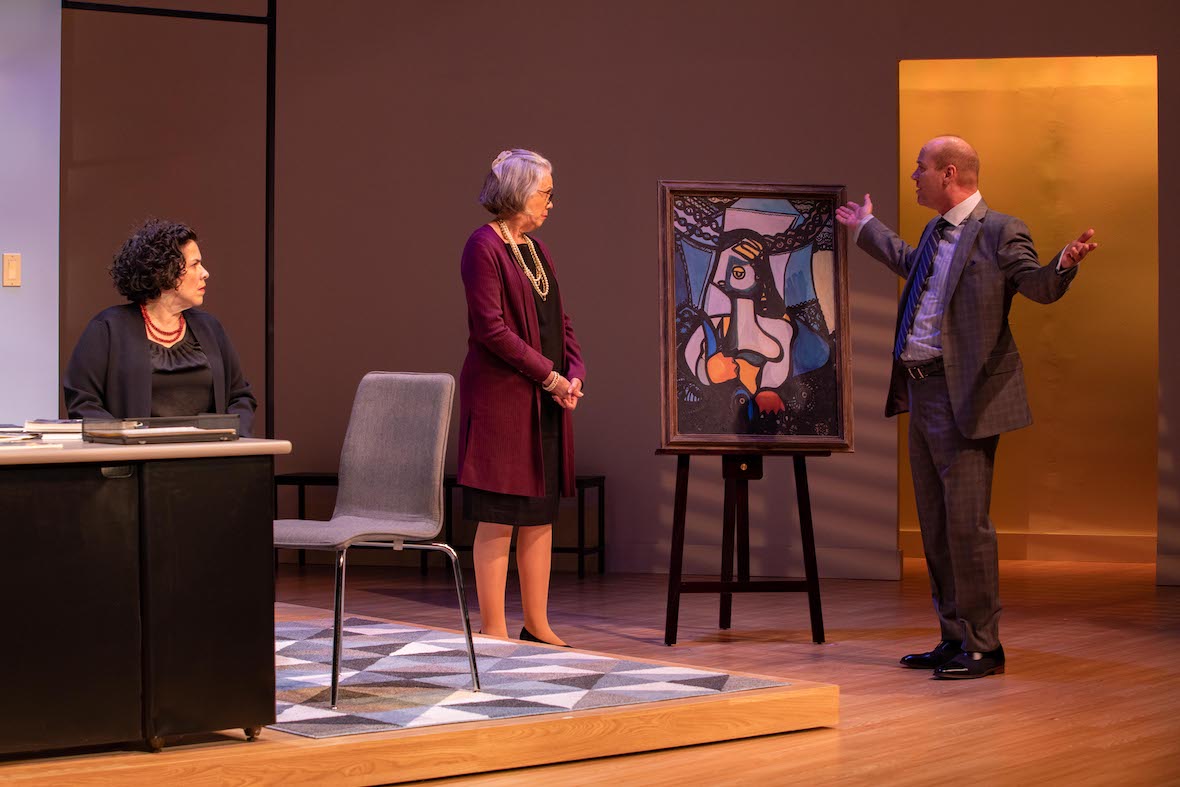 Playwright and actor Carmen Pelaez has deep artistic roots, familial ones that stretch back to Cuba. Her great-aunt Amelia Peláez (1896-1968) was a renowned avant-garde painter whose work has been displayed at New York’s Museum of Modern Art and at countless other places.

The Miami-born writer and performer has found her own artistic inspiration in her older relative’s work and legacy, first addressing the subject in her touching solo comedy “Rum & Coke,” and now in the Miami New Drama world premiere of her multicharacter play “Fake.”

As in “Rum & Coke,” which played in the original Area Stage space on Miami Beach in 1997 and in the Coconut Grove Playhouse’s Encore Room in 2003-04, Pelaez adopts an onstage alter ego named Camila in “Fake.”

Older now but just as passionate, Camila has become the head of the Latin American department at a prestigious New York art auction house. She is preparing for a sale, with hopes of setting a record, when a surprising wrinkle occurs: Her supervisor, Margaret (Carole Monferdini), tells her that suave dealer Roman Gimenez (Philip Hernandez) has located one of her great-aunt’s paintings, “Mujer.” And, Margaret instructs her, the long-missing painting is to be added to the auction, with essays about it written by Camila.

Camila is stunned but excited, though the feeling doesn’t last long. When the painting arrives, she quickly has misgivings that turn into a conflict-making certainty. She believes “Mujer” is a fake.

The play has plenty to say on a range of subjects, including politics (cultural, office, governmental), the need to fiercely protect an artist’s legacy and the forever-painful scars inflicted by the Cuban revolution. Miami’s Cuban-American audience, especially, feels the weight of Pelaez’s words.

As a performer, Pelaez is impassioned, likable, sometimes wryly amusing. Her interactions with the appealing Puig’s goodhearted Juan are genuinely warm, yet her persona turns fiery — unwise as that may be — when she’s pushing back against Louis, Roman, Marta and Margaret.

Wahl, who has given so many fine performances lately, turns in another one as the authoritative Louis, a smooth operator whose demeanor turns on a dime. Hernandez is magnetic as the slippery Roman, so much so that you wish he had more stage time. Ruiz gets the combative, dismissive Marta just right. Monferdini, however, makes the elegant Margaret too unassuming, and at the end of opening weekend it was obvious she was still struggling with her lines.

Miami New Drama continues to achieve striking production values at the Colony Theatre. Designers Christopher and Justin Swader, Carbonell Award nominees for their period-perfect “One Night in Miami” set, this time create a sleek, gallerylike space with movable offices at the center.

Lighting designer Kirk Bookman fills the doorways with pure pops of color, and Salomon Lerner contributes both subtle music and the sounds of a busy office — ringing phones in particular. Costume designer Gregory Gale gets the look of the characters just right, from Camila’s ubiquitous, black-dominated outfits to Margaret’s chic, burgundy-accented clothing, from the tanned Roman’s sun-kissed look to Louis’ smart and expensive suits.

As with most new work, “Fake” likely will evolve into an even stronger piece as it goes forward. The play’s “solution” to the problem of selling what may be a fake painting seems improbable yet predictable. Pelaez deliberately leaves the audience hanging as to the authenticity of “Mujer,” though her face as she listens to a caller from Cuba tips the is-it-or-isn’t-it question in a particular direction. Although relatively new to her position, Camila seems rather naive and not in the least adroit at navigating conflict.

Hewing to Miami New Drama’s mission of presenting plays that tell the stories of a diverse South Florida, “Fake” is the work of a genuinely talented actor-playwright whose ardor and art speak engagingly to audiences.