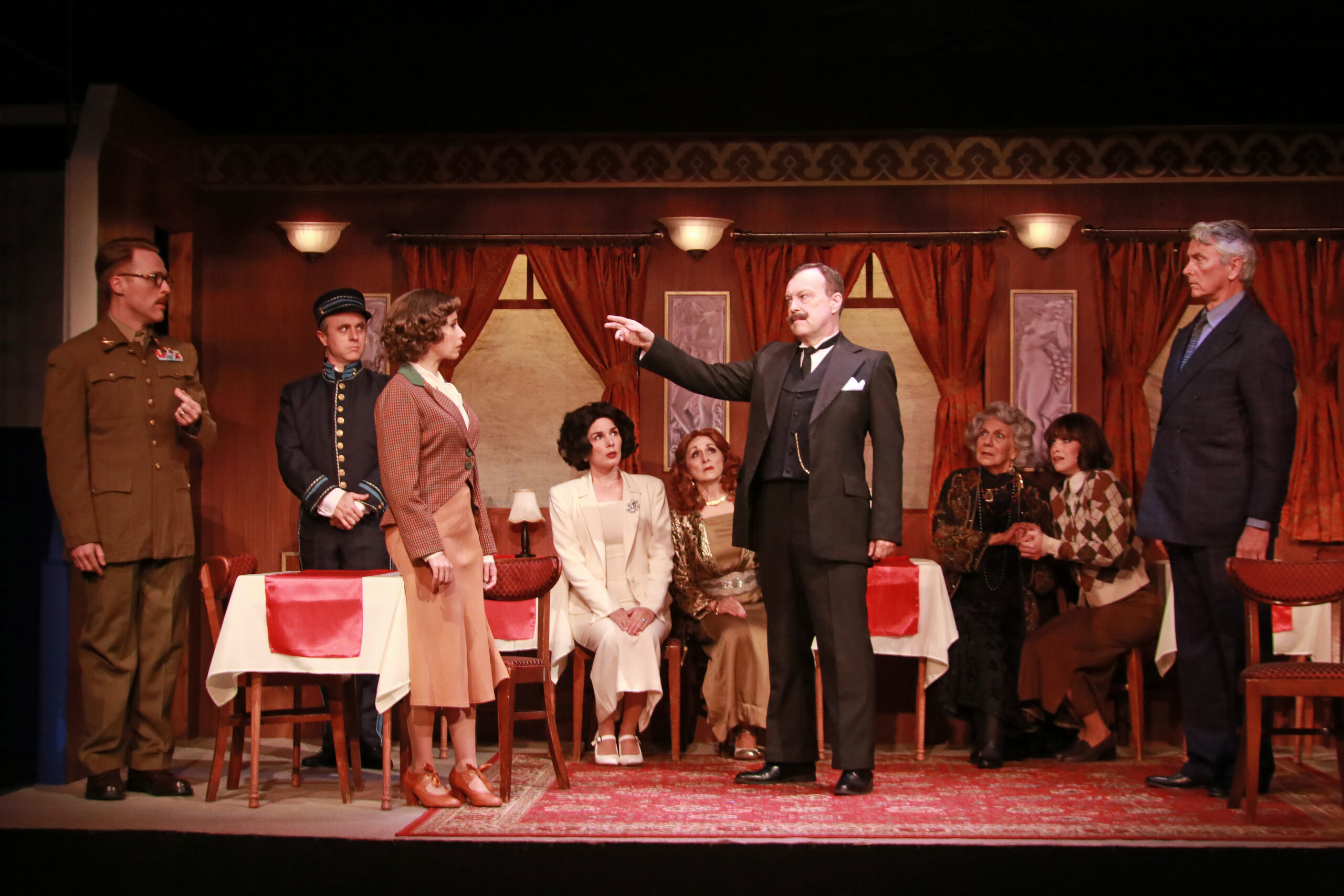 The cast of the Actors’ Playhouse production of the stage adaptation of Agatha Christie’s “Murder on the Orient Express” now at the Miracle Theater in Coral Gables through June 5.  (Photo courtesy of Alberto Romeu)

In the history of fictional literary detectives, British mystery writer Agatha Christie’s fussy Belgian sleuth Hercule Poirot is tops on the list. Known for his magnificent mustache that he treats as delicately as his clues, Christie’s Poirot is the focus in any whodunnit in which she’s placed him.

A particular fan fave is “Murder on the Orient Express,” the expertly crafted mystery yarn about a group of strangers on a train and a murder that’s committed during the trek from Istanbul to London.

Actors’ Playhouse at the Miracle Mile Theatre is presenting the adapted-for-the-stage version. Ken Ludwig, who is known for his madcap farces, most especially the Tony Award-winning “Lend Me a Tenor,” was called upon by the Christie estate to adapt one of the Queen of Crime’s novels for the stage.

The stage version of “Murder on the Orient Express” had its premiere in 2017. There may be a love-hate relationship for Christie fans in this version as Ludwig adds his variety of farce akin to a mystery dinner theater show, more than one might expect from something born of Dame Agatha. But the screwball antics work with credit to Playhouse director David Arisco who finds the balance between Ludwig’s lunacy and Christie’s suspense. 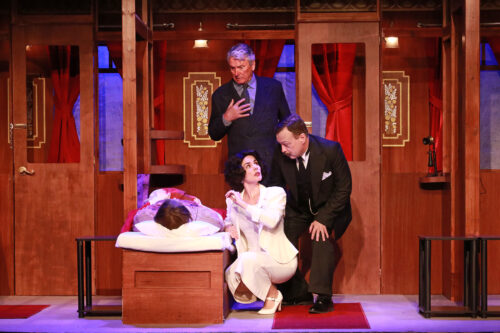 Ludwig has pared the number of suspects in the original from 12 to 8, which works quite well to keep tabs on who’s who as the plot thickens. Someone aboard the train has been found murdered in their bed and Poirot, who was hoping for a brief vacation from the crime business, is now back on the clock.

Despite the infused antics, the story stays true to Christie’s book and the gaggles of re-dos of “Express” (most people are familiar with the novel from the movie versions – Sidney Lumet’s 1974 film starring Albert Finney as Poirot and Kenneth Branaugh’s 2017 effort in which he casts himself as the internationally renowned detective).

While the main character is no doubt, Poirot, the wonderful ensemble cast assembled here makes each character equally worthy.

Terry Hardcastle is Poirot. As any seasoned actor should do when performing a character that’s been inhabited by so many before him, Hardcastle brings as much originality to the role as possible. While Poirot has quirks (you’ll see him in his train compartment staring at his mustache, fussing compulsively with it in a mirror), Hardcastle makes the eccentricities part of Poirot’s persona, never relying on them to get laughs. While there are plenty of “a ha” moments, Hardcastle, like his detective would, takes them seriously. That’s not to say his Poirot is dull. Not in the least. 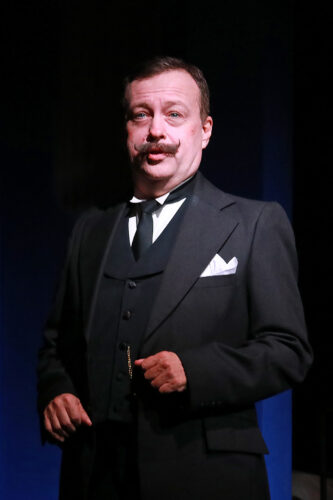 Terry Hardcastle inhabits the role of Detective Hercule Poirot in “Murder on the Orient Express” at Actors’ Playhouse. (Photo courtesy of Alberto Romeu)

The rest of the cast, each a misfit in their own way, are meant to be “characters” and characters they are.

Irene Adjan is Helen Hubbard the multi-times married Minnesota housewife. She’s the only American on vacation aboard the train. The veteran actress, who is adept at comedy, knows she has been given the part that can steal the show, and steal it she does right up to the very end.  Her character’s transformation, so skillfully created by Christie and equally attended to by Adjan, is stunning.

Speaking of veteran actresses, Lourelene Snedeker is the Russian Princess Dragomiroff (and on a personal note, her Mother Abbess in the Wick Theatre’s 2013 production is still one of the most unforgettable). A faceoff between her and Adjan’s Hubbard is one of many comic highlights in the production.

Mallory Newbrough plays the anxiety-ridden, uber-religious, Greta  Ohlsson, the Swedish travel companion to Dragomiroff. Gaby Tortoledo is the glamorous Hungarian Countess Andrenyi, who can balance wearing a white suit while using her physician skills to examine bloody stab wounds. The playwright has written in a “crush” for Poirot with the object of his affections being the Countess.

Michael McKenzie, Seth Trucks and Terry Hardcastle take in a clue in the Actors’ Playhouse production of “Murder on the Orient Express.” (Photo courtesy of Alberto Romeu.)

Krystal Millie Valdes is the picture of virtue as the innocent English governess Mary Denebaum. Seth Trucks is the dependable French conductor, Michel, who harbors a secret that is revealed at the end. Alexander Blanco’s Hector McQueen as Ratchett’s personal secretary and the son of a prominent district attorney also displays deft as his character’s cover is blown.

Iain Batchelor is a master of disguise playing double roles as the over-protective Scottish Colonel Arbuthnot and the dastardly Samuel Ratchett.

Michael McKenzie is Monsieur Bouc, who comes undone as the manager when the heat is turned up as his train becomes the scene of a crime. McKenzie’s mastery of facial expression and body language conveys some of the best comic moments Ludwig has written for Monsieur Bouc. McKenzie milks them for all they are worth in the best possible way.

Tim Bennett’s sets are wonderfully creative and make the small space open up the world of the Orient Express in the small theater. Two sides of the exterior of the train slide in and out to expose the dining car. They close and reopen to reveal the three rooms of the train compartment, where Poirot, Ratchett and Hubbard’s quarters all connect. It also opens for a third playing space, a platform between the cars.

Shaun Mitchell’s sound design with period music sets the mood. Eric Nelson’s sepia-inspired lighting casts an antique feel over the playing area. Jodi Dellaventura’s detail to the set dressing of the 1930s train does the same. And costumer Ellis Tillman’s love of all things fur, elegance, and refinement adorn the actors.

Arisco’s direction, as usual, is spot on and, in a subtle, yet remarkable study of the script, the major events happening in the time and place of “Express” seep in like the smoke and fog effect that brings to life the setting of the steam locomotive. It’s 1934, the time of the rise of fascists and dictators like Hitler and Stalin, only 5 years before the Nazi invasion of Poland. 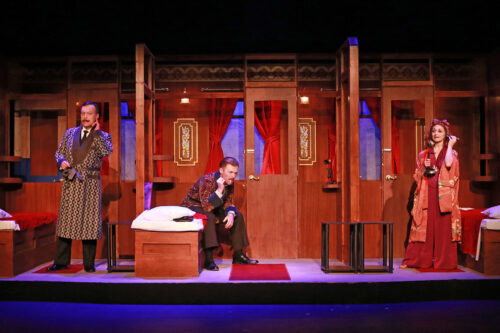 In between the comedy, the ghastly elephant in the room is addressed. It’s how the show opens. We’re in the dark theater and we don’t see it, but we hear it. A 3-year-old named Daisy from a wealthy family is snatched from her bedroom and kidnapped for a large ransom. Eventually, the kidnapper kills her. Christie is said to have based the Daisy subplot on the renowned Lindbergh baby case in 1932, right before she began writing her book.

As the crime becomes somewhat central to Poirot’s murder on the train, it may become less easy to lean into the laughs and that’s where Ludwig and Christie don’t particularly meet on the same train track.

Still, the 120-minute romp is a fun night out with high production values and a superb ensemble theater troupe. As Poirot himself says in the play, “What better way to spend a pleasant evening together?”

WHAT: “Murder on the Orient Express” by Ken Ludwig, based on Agatha Christie’s novel

WHERE: Actors Playhouse in the Balcony Theatre at the Miracle Theatre, 280
Miracle Mile, Coral Gables

TICKETS: $55 to $85 (seniors 65 and over get 10 percent off weekdays only; students 25 and under with valid student ID pay $15 for a rush ticket available 15 minutes before a weekday performance; Tix @ 6 offers $30 tickets weekdays between 6 and 6:30 p.m. in person at the box office, subject to availability)