Review: GableStage’s ‘The Price’ is engrossing and beautifully acted 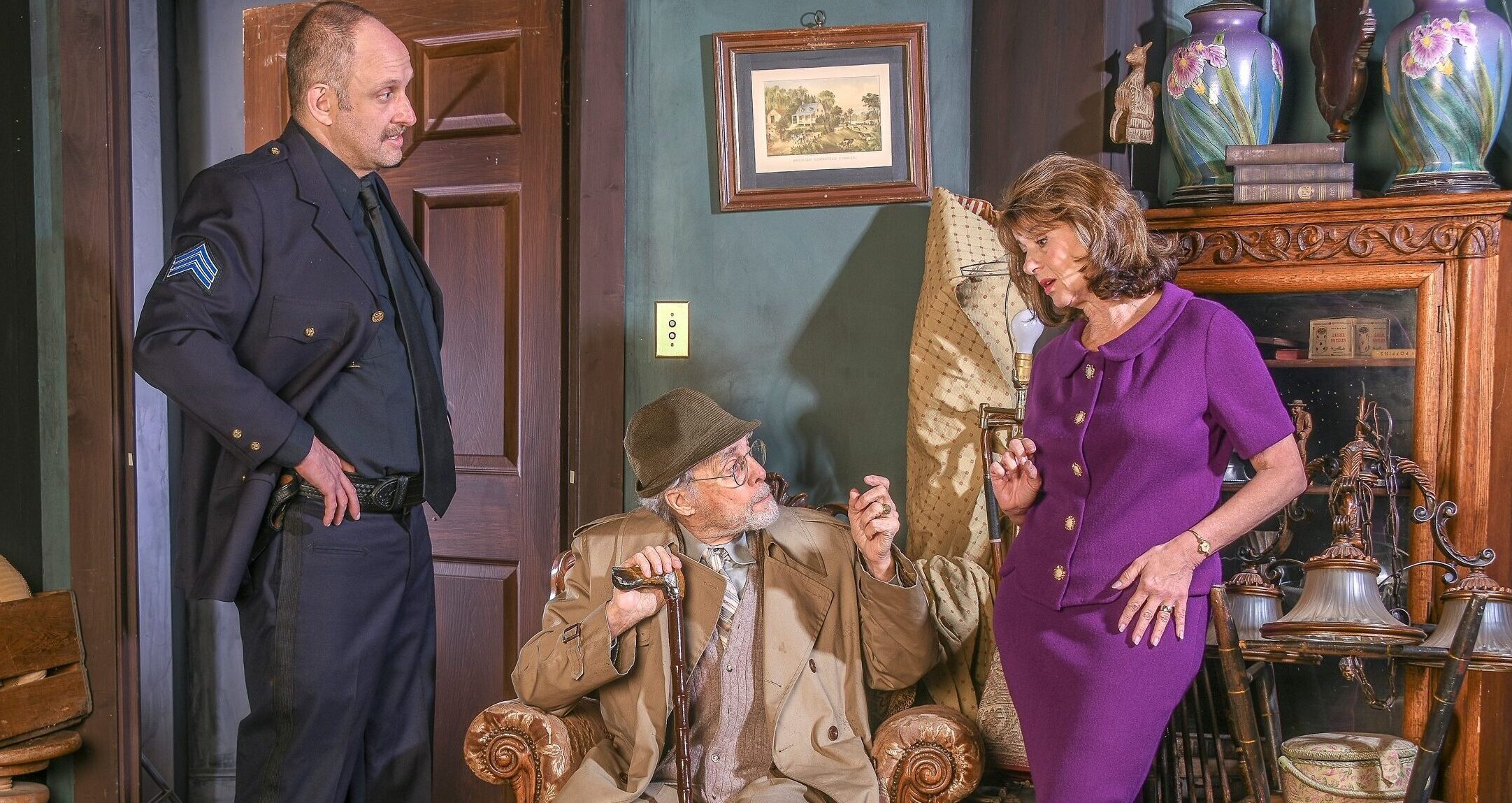 Forever on the short list of the greatest American playwrights, Arthur Miller had a gift for crafting dramas that were steeped in time and place, yet timeless in their exploration of truths about the complexities of the human experience.

In his major works — ranging from “All My Sons” in 1947 and his Pulitzer Prize-winning “Death of a Salesman” in 1949 to “The Crucible” in 1953, “A View from the Bridge” in 1955 and “The Price” in 1968 — Miller took on issues such as war profiteering, the crushing dark side of the American Dream, McCarthyism, illegal immigration, and the settling of familial scores.

Threaded thematically throughout Miller’s plays are questions about morality and the consequences of ignoring bedrock ethical principles.

After a sudden COVID-19 closure, the death of its longtime leader and a 20-month production pause during the pandemic, GableStage has come fully back to life with its newly opened production of Miller’s “The Price.” The play was to have been the last one directed by GableStage’s longtime producing artistic director, Joseph Adler, who passed away after a long battle with cancer. Now, it’s the first directed by his successor, Bari Newport, who has already put her stamp on the company in multiple ways.

Changes become apparent from the moment you walk up to GableStage’s space at the eastern end of Coral Gables’ historic Biltmore Hotel. A staffer checks for vaccination status or a recent negative COVID test, then issues a wristband before you proceed to an outdoor box office. Newport herself may be found outside, talking about the play and taking questions, and there’s more outdoor, pre-show seating. Additional staff members are in evidence, ready to help, and the house is open well before curtain time, a rarity in the Adler era. 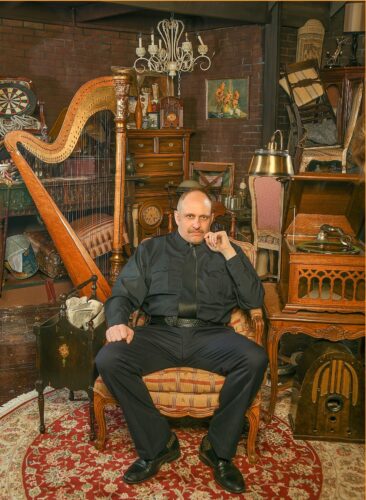 The space inside is spruced-up but, except for Adler’s palpable absence, it is reassuringly familiar. After a welcoming speech from Newport, the art begins – and that too is familiar, engrossing and delivered at the company’s customary high level.

Set in 1968, “The Price” has four characters, but you could argue that Lyle Baskin’s set constitutes a fifth. Chockablock with the possessions and furniture of a once-wealthy family ruined by the Depression, the attic floor of a soon-to-be-demolished Manhattan brownstone symbolizes loss, betrayal and poisonous family secrets. It had been home to Victor’s late father until the elder man’s passing 16 years earlier. (Properties designer Beth Fath is responsible for the artfully chosen clutter in the attic.)

Victor Franz (Gregg Weiner), a New York police sergeant who has walked the beat for decades, is turning 50 and eligible to retire. He and wife Esther (Patti Gardner) are meeting used-furniture dealer Gregory Solomon (Peter Haig) at the attic. Missing, at least initially, is Victor’s estranged brother, Walter (Michael McKenzie), a successful doctor and the legal co-owner of all that clutter.

Though many contemporary plays run 90 minutes with no intermission, “The Price” is old-school:  2½ hours, with intermission, of character exploration and carefully plotted revelations.

In the first act, though Victor and Esther are at odds over the timing of his retirement, what he’ll do next and how some of her long-restrained dreams might finally be fulfilled, Miller makes room for humor. Solomon, on the cusp of turning 90, is a cagey old fellow with a lifetime of self-benefiting tactics at his disposal, including jokes, misdirection, delays and faux outrage.

But once Walter shows up and the second act gets rolling, “The Price” shifts into more serious territory as it becomes a reckoning between the brothers. Sacrifice, selfishness and sins of omission all come into play. And some of the twists are shocking, piercingly painful and, for anyone questioning the wisdom of life choices, unnerving. 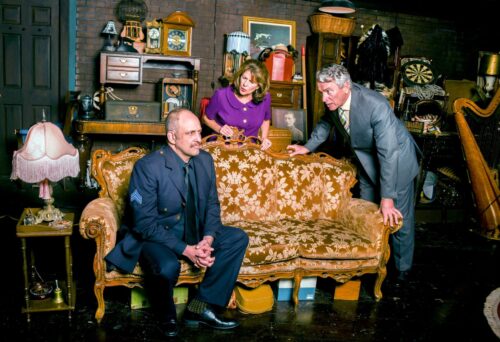 The characters played by Gregg Weiner, left, Patti Gardner and Michael McKenzie clash over choices in “The Price.” (Photo courtesy of George Schiavone)

The production is beautifully acted, with Weiner delivering a richly shaded performance as Victor. In his 18th GableStage show, the actor plays the cop-at-a-crossroads with warmth and restraint. Rather than being genuinely annoyed by Solomon, he’s more bemused, and the approach lifts the first-act comedy. The choice makes room for an explosive, take-the-gloves-off confrontation with McKenzie’s Walter, whose portrait of a cocky doctor accustomed to power ends up cracking to reveal the damaged man underneath.

Gardner’s Esther, who is known to enjoy a cocktail or three, is a lovely woman raggedly on the edge. She understands that this moment and Victor’s decisions may mean she’ll get some of the material things she’s long been denied. But she clips in some cajoling here and complaining there, as she doesn’t trust the good man who is her husband to do what she thinks is in their best interest.

Haig has a joyful, detailed field day as Solomon. Climbing the stairs to the attic may have presented a brief physical test to the former vaudevillian, but he’s a live wire by nature, and wrestling with whether to take on an attic full of furniture reenergizes him.

Lighting designer Tony Galaska, sound designer Matt Corey, costume designer Emil White and stage manager Katie Ellison have worked seamlessly with Newport, Baskin and the actors to give Miller’s play its due – and then some.

It isn’t difficult to speculate about why Adler, a celebrated director who left such a significant imprint on South Florida theater, chose “The Price” as his final production. He knew his remaining days were limited, and a play about choices and regrets spoke to him, as it does to us. Newport, who will carry GableStage into its future, has made sure of that.

To read a preview for this play, click here.

WHAT: “The Price” by Arthur Miller

STREAMING: A streaming option is available beginning Nov. 17; cost is the same as the price of a regular ticket. Check with the box office for details.