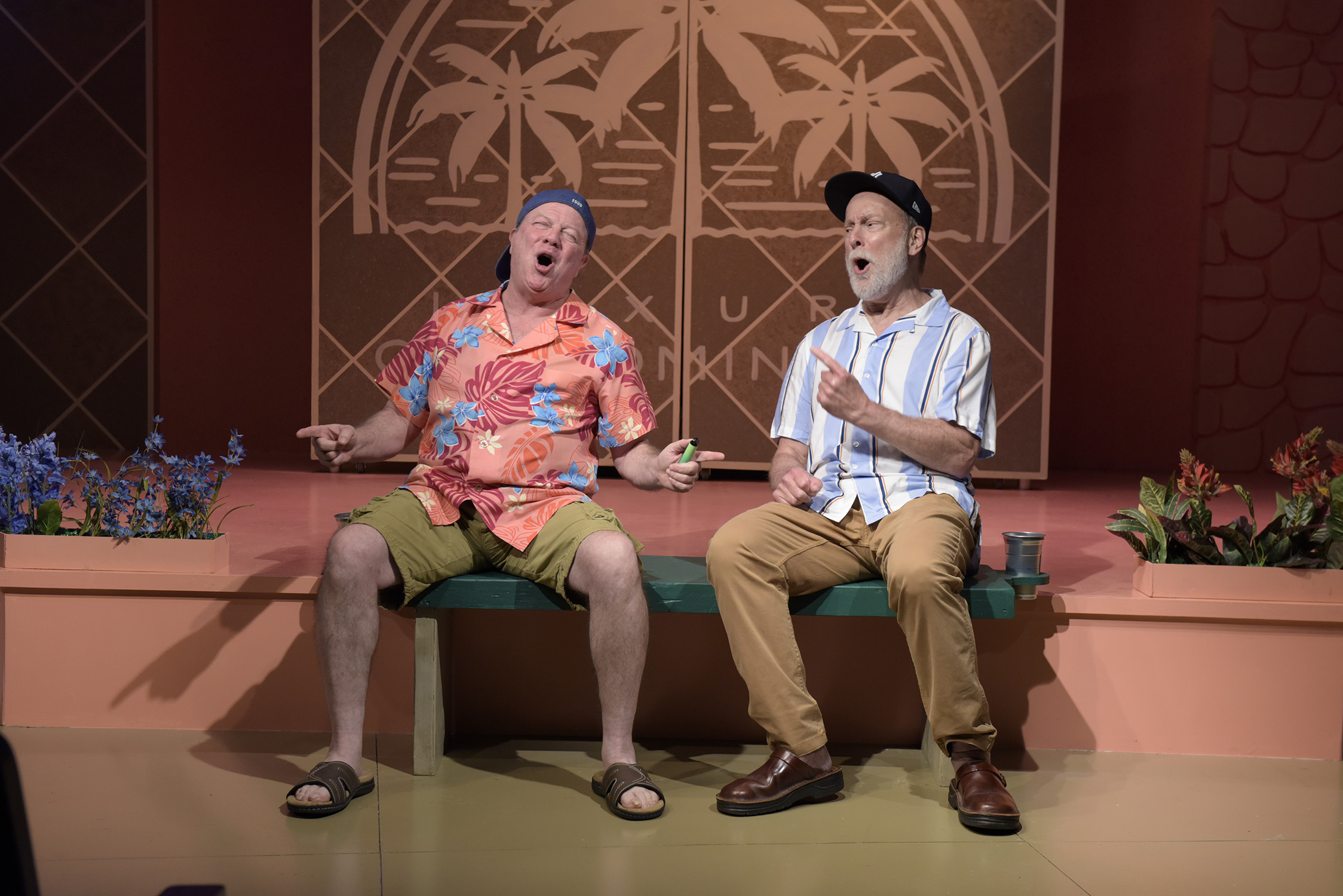 The characters played by Avi Hoffman (left) and Robert Zukerman sing as they wait for their cars in Jessica Provenz’s “Boca.” (Photo/Magnus Stark)

As bad news bombards us 24/7, perhaps Jessica Provenz’s “Boca” is the play we need right now.

Getting a significant second production at GableStage after its world premiere last summer at Barrington Stage in Massachusetts, this comedy about retirees in an over-55 Boca Raton condo community is resonant, playful and poignant.

If you happen to belong to the demographic represented by its characters, you’ll likely laugh harder. But the longing for love, the intricacies of friendships, the ability to survive and thrive after loss? Those themes touch everyone sooner or later.

Illuminatingly directed by Julianne Boyd, the Barrington Stage artistic director who helmed the play’s premiere, “Boca” is a collection of 10 short related scenes about life at Boca Oasis, a luxury condo development where the grass is literally always greener (and never more than a maximum 3 inches in height).

Five actors play 11 characters, giving the performers a chance to display their versatility, which they do. Style-reflecting costume changes and different wigs for the women help, but the transformations come from the actors altering their voices and physicality – a challenge for the actors and fun for the audience to watch.

A recurring situation begins the 85-minute play, as Mo (Avi Hoffman) and Marty (Robert Zukerman) sit on a bench outside the clubhouse waiting for the valet, Sergio, to bring Mo’s Tesla and Marty’s saffron-colored Porsche. The men razz each other, as guys do, and talk about their lengthy marriages. Mo is about to celebrate 48 years of wedded bliss to the sometimes-cranky Iris (Deborah Kondelik), and he has come up with a sentimental if decidedly odd gift to mark the occasion. Marty, who complains that he’s in a 45-year “spite marriage,” likens his ultra-disciplined wife Deann (Beverly Blanchette) to “Satan on a Peloton bike.” 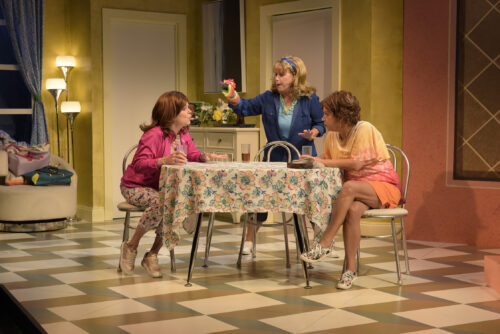 Over in one of the condos, friends Susan (Blanchette), Janet (Kondelik) and Elaine (Barbara Bonilla) have gathered for a post-pickleball hangout. Janet is a three-time widow, Elaine a divorcee, and one of their debates involves the proper waiting period before going after a widower – used to be three months, now it’s two. Whenever the conversation gets too chaotic, former kindergarten teacher Susan puts on a sock puppet named Mr. Noodle to demand their attention in a goofy voice. She has a far more important matter to discuss, one involving her attractive podiatrist husband, Robbie (Zukerman), and a poker game.

A condo board Zoom meeting is, as anyone who tried to do business during the height of the COVID-19 pandemic would attest, a glitch-filled ordeal.

Janet lets everyone into the meeting: dictatorial board president Deann, fiercely breaking a sweat on her exercise bike; Stan (Zukerman), trembling as he holds something wrapped in a plaid blanket to his chest; and Bruce (Hoffman), the widower of the moment at the Oasis. Topics range from the mundane (what color to paint the pickleball courts) to the power politics of the upcoming board election to the deadly serious (just why is the Boca Oasis grass so green?).

In Mo’s beloved Tesla, an annoyed Iris and her latter-day hippie pal Louise (Bonilla) are stuck in Boca’s perpetually hideous traffic. A missed turn leads to a seized opportunity – why not hit the road ala Thelma and Louise? And they do.

We watch as Susan tends to her all-blue garden; Mo worries to Marty about Iris’ absence; and Susan makes a campaign speech about the importance of friendship and community as she attempts to unseat Deann.

Then comes what is arguably the play’s best scene, “Stay, Please.” Bruce returns from yet another date to find Elaine in his condo, her signature lasagna and a fine Merlot at the ready, romance on her mind.

She points out that there are 400 women living at Boca Oasis and just 105 men, only 22 of them single (and some of those are gay or weird). Bruce is, she says, “fresh meat.” But when he tries to put her off, Elaine demonstrates that “no” isn’t an answer she’s prepared to accept.

The final major scene in “Boca” is a dinner party that devolves into door-slamming farce.

Hoffman and Kondelik do quick changes so they appear in both of the roles each one plays – he as Bruce and Mo, she as Janet and Iris. Robbie is the host, though he keeps disappearing into the bedroom to tend to Susan, sick in bed with a killer migraine. 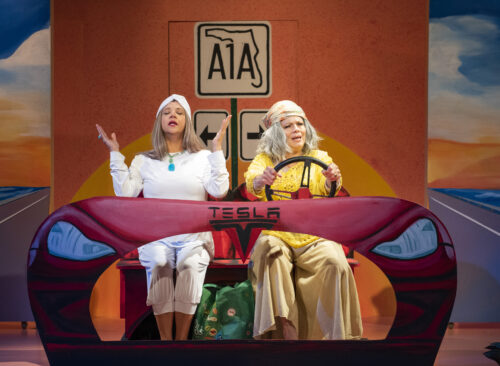 Everyone can’t help noticing how freezing cold it is in the condo – Elaine borrows Susan’s winter wear – and as it turns out, there’s a reason Robbie has turned the thermostat way, way down. But you’ll have to see “Boca” to find out what that reason is.

The seasoned “Boca” cast delivers, even in the moments when the material is so-so, which it sometimes is.

Kondelik has a tougher time making much of the sweet-though-bland Janet, but her fiery Iris is totally believable as a woman whose conversational arsenal includes many an f-bomb.

Blanchette is likable and nurturing as Susan – though the puppet bit Provenz has devised for her is, sorry, ridiculous – and as Deann, she’s as hard as the character’s toned body.

Bonilla, a New York and regional theater actor who is making her stage debut in the state she now calls home, gets every comedic flourish wielded by ex-New Yorker Elaine just right.  She’s a goofy caricature of an older New Age gal as Louise, but that’s the way Provenz has written the character.

Hoffman has a big, affable personality as Mo and a more restrained one as Bruce, playing wonderfully off Bonilla’s Elaine. Zukerman, who was in the original Barrington production of “Boca,” is a terrifically versatile actor, absolutely different as he becomes Marty, then Robbie, then Stan.

Longtime GableStage designer Lyle Baskin created the set, fitting a pair of condos on either side of the central area where Mo and Marty await their cars, and Iris and Louise take off on their extended road trip. The yellow and blue condos, decorated by Clara Fath, are true to form for an upscale 55+ community. That central area and Mo’s “Tesla,” however, are cartoonishly at odds with the condos.

Although GableStage has presented comedies and farces during its long history, the company’s usual fare has been edgier, grittier, more seriously topical. “Boca” is more like something mentioned multiple times in the play: Stevia, the sweetener the clubhouse restaurant just can’t seem to keep in stock.

Provenz’s play is a sweet contemplation of the issues and concerns that mark the autumn and winter of life. Whether you’re at that stage or not, “Boca” is likely to make you laugh.

WHAT: “Boca” by Jessica Provenz