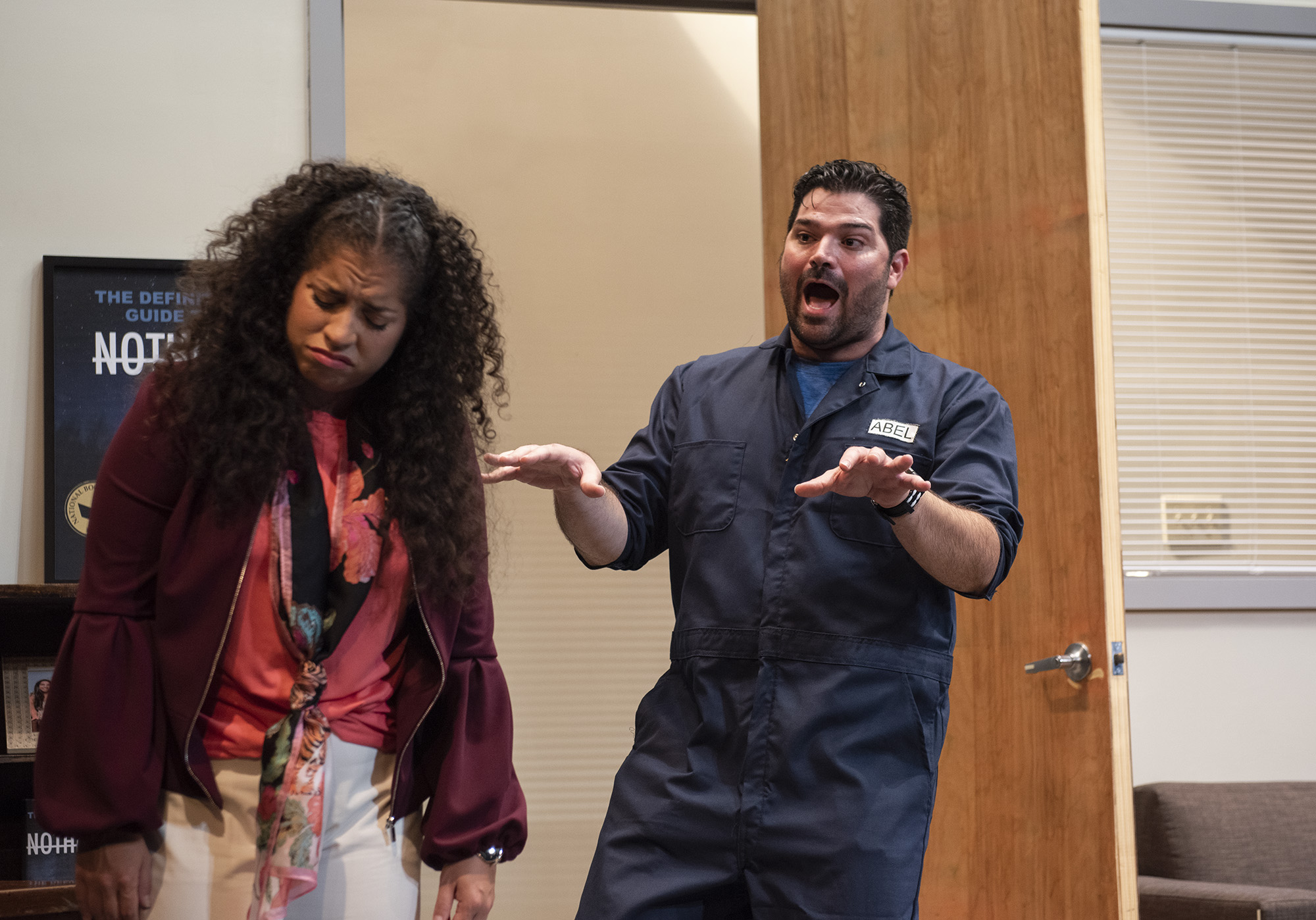 Alexandra Acosta is Lucia and Alex Alvarez is Abel in Tanya Saracho’s “Fade” at GableStage in Coral Gables through Sept. 18. (Photo courtesy of Magnus Stark)

In many a fairy tale or rom-com, happily-ever-after endings are the norm.  The endings in art that surprises tend to be messier, less predictable, unsettling. The latter is true of Tanya Saracho’s “Fade,” an insightful dramatic comedy at GableStage.

Saracho’s play, staged with a fluid cinematic beauty by D-Projects founder Teo Castellanos, explores classism within a subset of the Latinx community.  Its two characters are Mexican-American, somewhat alike in the particular sound of their Spanish, in their colloquialisms and slang, and in certain cultural references.

And yet, in addition to gender, their lives thus far make them different. 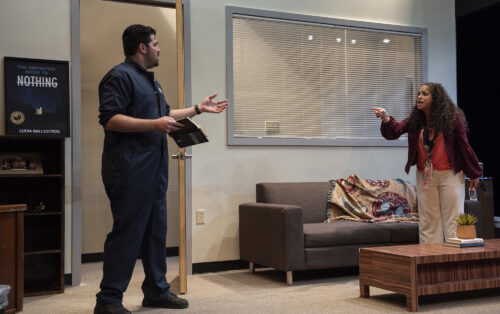 Lucia (Alexandra Acosta), a Mexican-born novelist who moved from Chicago to Los Angeles to make money as a television writer, bristles when she’s called a fresa, suggesting she once was a preppy with money and a maid. She was.

Abel (Alex Alvarez) is a janitor born in the El Sereno neighborhood of east Los Angeles.  He’s a product of his family’s Mexican culture, a man who served his country and his community before an awful, life-changing moment.  He gets the job done and doesn’t say much. Until he does.

In the succession of scenes – some fleeting or nearly silent except for the music flowing into Abel’s earbuds, others parsing bias and microaggressions and more – Lucia and Abel slowly develop an after-hours work friendship.

He’s reluctant at first, willing to banter with Lucia about bad TV and the cultural deafness of her all-white-male writer’s room but tight-lipped about his personal life.  Since her show is set in L.A. with a Latina leading lady and, late addition, a Latino love interest, Lucia soon realizes she can pick Abel’s savvy brain for ideas and authenticity.

That’s where the real trouble begins. 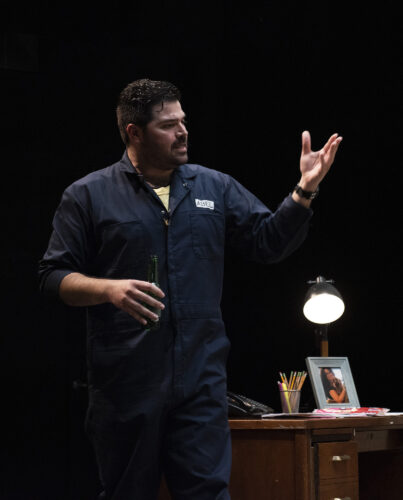 Alex Alvarez as Abel tells the story of his life in Tanya Saracho’s “Fade” at GableStage. (Photo courtesy of Magnus Stark)

For nearly all of the play’s 95-minute running time, “Fade” is almost effervescent, thanks to Saracho’s gift for comic observations, Castellanos’s smooth and illuminating direction, and the wonderfully detailed work of two truly fine actors.

Like their characters, Acosta and Alvarez are stylistically different.

Acosta makes Lucia an over-the-top drama queen.  She’s always bursting into her office on the verge of tears, yelling, at her wit’s end about how to circumvent or beat her writers’ room nemesis.  Acosta believably takes the audience on Lucia’s journey from frightened neophyte to a professional willing to do anything to claim her power.

As Abel, Alvarez is exquisitely in control.  He’s funny, observant, down-to-earth, finally heartbreaking.  Simply watching Alvarez react to the emotional roller coaster that is Lucia is a mini master class.  Onstage, he’s not pretending to be Abel – he is Abel. 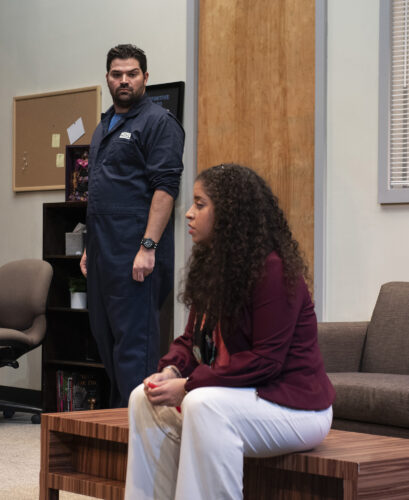 Set and lighting designer Frank J. Oliva has crafted a utilitarian beginning writer’s office for Lucia, one that proclaims it’s a showbiz workplace via classic movie posters in the hallway outside her domain, with set dressing and properties design by Jameelah Bailey.

Costume designer Camilla Haith has created a variety of quick-change looks for Lucia, who seems to like to make herself look taller with island-vibe platforms or a pair of sparkly hot pink high-heeled sandals; Abel, always in uniform, is stuck in blue coveralls.  Seth “Brimstone” Schere is the sound designer, providing a window into Abel’s varied musical world. 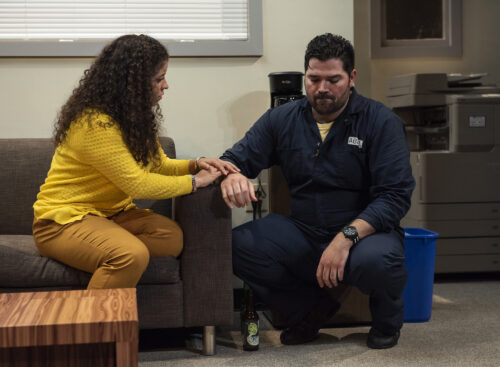 Alexandra Acosta as Lucia and Alex Alvarez as Abel share an emotional moment in “Fade” at GableStage. (Photo courtesy of Magnus Stark)

As it draws to a close, “Fade” – in film and television, the action of making a scene fade in or fade out – becomes something closer to the South Central L.A. slang meaning of the word: to murder.  In this case, it’s not a person who dies but a friendship.  An egregious violation of trust is the weapon, as truth is manipulated into a stereotype.  It happens, but it’s painful to watch.

Still, though the effervescence dims, “Fade” provides a thought-provoking, impressively realized exploration of the ways classism and stereotyping pollute our lives.

WHAT: “Fade” by Tanya Saracho