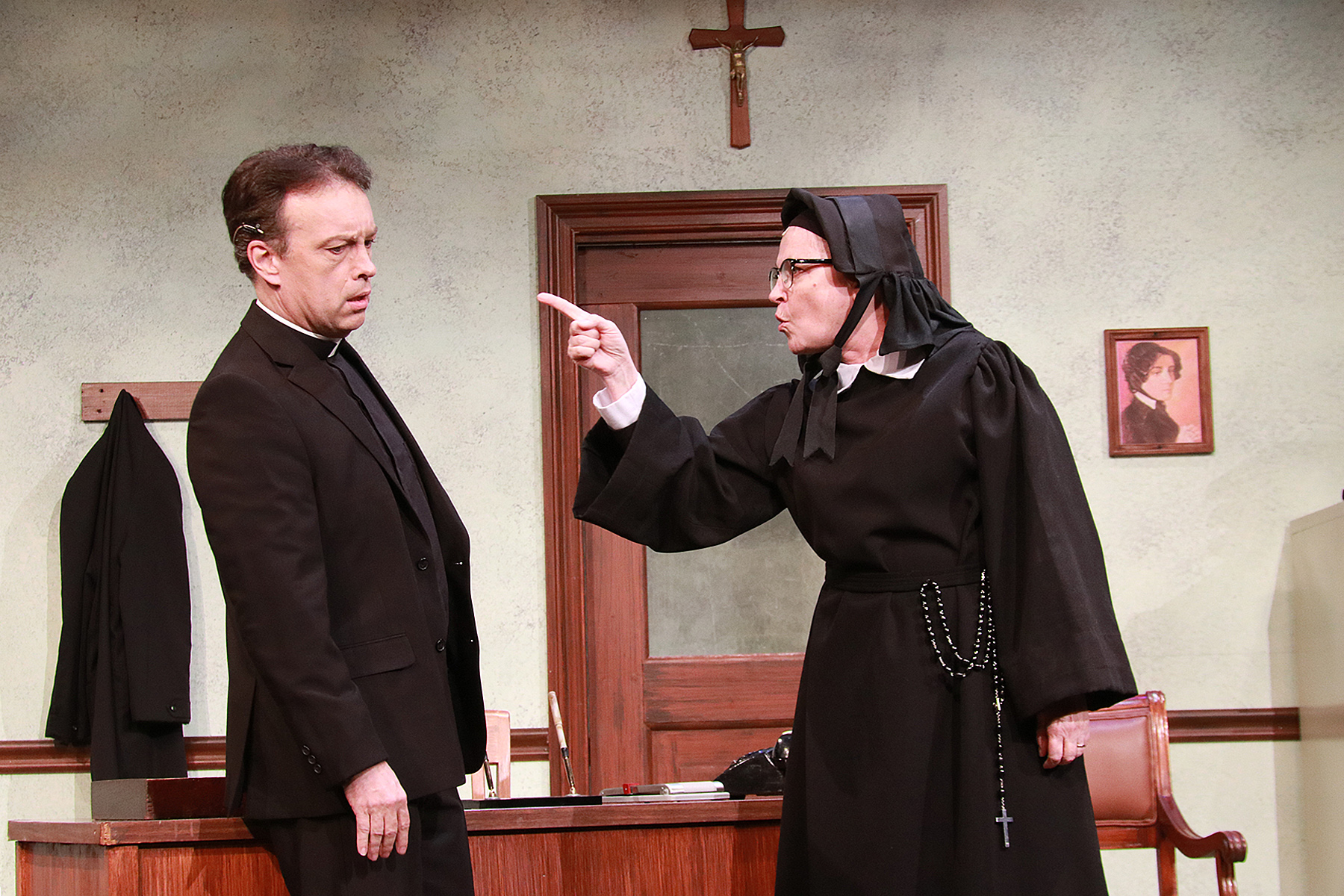 Plays come and go, but the great ones endure, speaking memorably to audiences over time. John Patrick Shanley’s “Doubt: A Parable,” winner of the 2005 Pulitzer Prize for Drama and the Tony Award for best play, continues to rivet and divide audiences. And different versions of the story at its core — a priest is suspected of molesting a 12-year-old boy — are still playing out in headlines.

Actors’ Playhouse artistic director David Arisco has mounted a taut, sometimes spellbinding version of “Doubt” in the company’s intimate Balcony Theatre space at the Miracle Theatre in Coral Gables. Even if you caught the original off-Broadway/Broadway production starring Cherry Jones and Brían F. O’Byrne, even if you know “Doubt” from the 2008 movie version with Meryl Streep and Philip Seymour Hoffman, this new production is worth seeking out, in part because of the powerful performances of actors Laura Turnbull, Terry Hardcastle, Jessica Sanford and Rita Joe.

“Doubt” is set in 1964 at the fictional St. Nicholas Catholic School in the Bronx. Playwright Shanley’s deep understanding of that time and place — he went to parochial school in the Bronx and would have been 14 at the time the play takes place — informs the play in multiple ways. Although the plot is a product of his imagination, it feels thoroughly authentic.

Playing out over an increasingly intense 90 minutes, “Doubt” pits a rigid traditionalist against a charismatic figure who welcomes change. Sister Aloysius (Turnbull), whose order is the Sisters of Charity, is the school’s take-no-prisoners principal. She is ever vigilant, by-the-book, expecting the worst. Boys, she tells her younger colleague Sister James (Sanford), are “made of gravel, soot and tarpaper.” In her opinion, a song like “Frosty the Snowman” is heretical. And don’t get her started on the downturn in good penmanship and the evils of using a ballpoint pen. 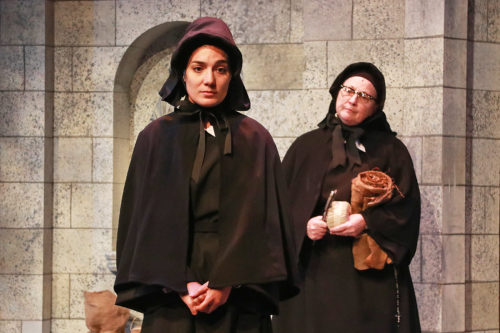 Her opposite is Father Flynn (Hardcastle), a Boston native and the parish priest. He is popular and inspiring, peppering his sermons with parables. Pushing to make the school and church more welcoming, he coaches basketball and tells Sister Aloysius that he may take the boys on a camping trip. But after the school’s first black student, 12-year-old altar boy Donald Miller, returns to class upset and with alcohol on his breath, Father Flynn becomes the target of Sister Aloysius’ obsessive suspicions.

She enlists Sister James, an insecure young woman prone to tears, in gathering evidence. She asks Donald’s parents to come in, and though only Mrs. Miller (Joe) shows up, the woman provides information that proves disturbing in several ways. In a final confrontation, Flynn furiously denies Sister Aloysius’ allegations. Yet he winds up moving to another parish — a promotion. Sound familiar?

Shanley’s script deliberately provokes a divide in the audience over Father Flynn’s guilt or innocence, which is part of what makes “Doubt” so effective. Some theatergoers think Sister Aloysius is right. Others side with Father Flynn. Still others leave the theater with doubts tumbling in their thoughts.

The passionate performances of Turnbull and Hardcastle help justify that divide. From the start until the play’s final moments, Turnbull’s Sister Aloysius is a sometimes tough-to-take zealot whose mission is to protect the vulnerable students in her charge. Hardcastle’s Father Flynn is charming and complicated yet convincing. Sanford’s sweet Sister James takes his denials at face value, though she internalizes the subsequent conflict between her stern boss and the priest in a way that turns her dreams dark. In her single scene, Joe’s Mrs. Miller quietly yet devastatingly conveys the stakes for Donald and the lengths to which she would go to give her bullied, beaten son a better life. 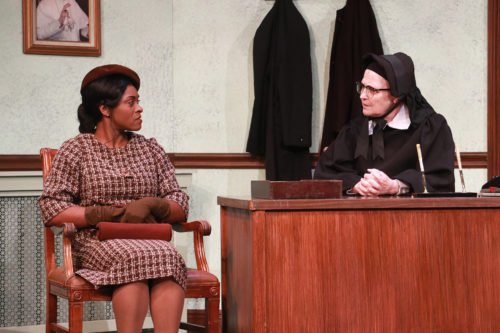 “Doubt” has also inspired first-rate work from Arisco and his design team. Gene Seyffer’s set, dressed by properties designer Jodi Dellaventura, juxtaposes a mid-1960s principal’s office (with a floor of salmon-and-green-checkerboard linoleum, a vintage radiator and walls sporting a crucifix, a picture of Pope Paul VI and another of Sisters of Charity founder Elizabeth Ann Seton) against the compact stone grandeur of a courtyard dividing the school and rectory.

Although written 15 years ago and set during a very different era 55 years ago, “Doubt” echoes myriad uncertainties of contemporary life. The Actors’ Playhouse production demonstrates yet again that Shanley’s play is edge-of-your-seat theater.