Review: ‘Confessions of a Cocaine Cowboy’ interrogates a history of violence in Miami 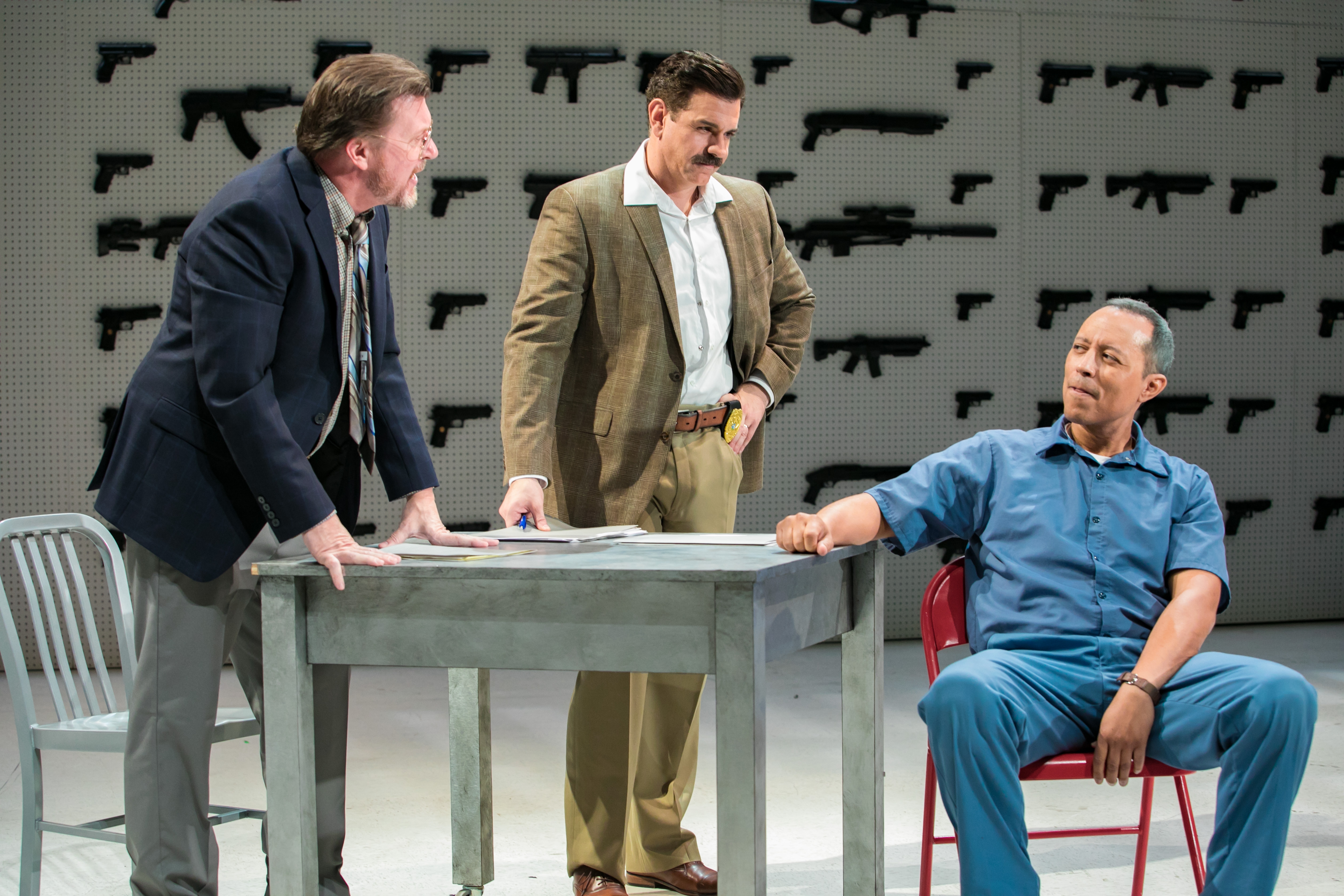 Not so long ago, in the late 1970s and ’80s, Miami was a city at war. On one side: cops, state attorneys, judges and other assorted players in the world of law enforcement. On the other: Colombian cocaine importers, including the brutal Griselda Blanco (aka “La Madrina” or “La Viuda Negra” — “The Godmother” or “The Black Widow”) and the hit men who became known as Cocaine Cowboys, guys like Jorge “Rivi” Ayala.

Ayala, who would execute Blanco’s orders by literally executing anyone, from people who crossed her to those holding debts she simply didn’t feel like paying, is the central character in “Confessions of a Cocaine Cowboy.” The play by “Cocaine Cowboys” documentarian Billy Corben and playwright Aurin Squire is getting a high-intensity, high-profile world premiere by Miami New Drama at Miami Beach’s Colony Theatre.

Tonally, the drama about a hit man suspected of some three dozen murders, a prisoner doing life for three to which he admitted, is more amusing than you might expect. A tart advisory printed in the program and posted outside the doorways into the audience chamber warns that “gunfire, strobe lights, strong language, violence, blood and other Florida f**kery will be experienced during this performance.” How very true.

The laughs flow from elements of Yancey Arias’ magnetic performance as Ayala, and from the interplay of Stephen G. Anthony as the Anglo cop Singleton and Nicholas Richberg as his Cuban-American colleague Diaz. The two begin the second act by addressing the audience, vividly recounting details of Miami’s cocaine wars. After four pages of their back-and-forth, Rivi speaks from the rear of the audience, where he’s been watching, too: “You guys done? I almost forgot I was in this show.”

Zilah Mendoza plays three key women in Rivi’s life: the seductive, ruthless, vulgar Blanco; a state attorney called Kathy, whose look and biography underscore her similarity to Miami-Dade State Attorney Katherine Fernandez Rundle; and, briefly, Rivi’s wife, Gladys. Kathy and Rivi play a verbal cat-and-mouse game as she practically salivates at the careermaking possibilities of using his information to capture and, eventually, kill Blanco. Yet even as a prisoner, the ever-clever Rivi manages to turn the tables on her.

Corben, Squire and director Michel Hausmann, Miami New Drama’s artistic director, keep “Confessions of a Cocaine Cowboy” highly theatrical, moving back and forth in time, starting the show (which features original music by Salomon Lerner) not with an overture but with Rivi firing off 32 bullets from a MAC-11 submachine gun, known to Rivi and his hit man peers as the “Miami Chopper.”

On the set by Christopher and Justin Swader, a wall of firearms is concealed, then revealed. The place where the cops and Kathy grill Rivi seems to be packed equally with boxes of legal files and wrapped-up cocaine. Assassinations get carried out, blood gets mopped up, then the cycle repeats.

The acting in the production is impeccable. Arias plays Rivi as an initially reluctant hit man who exudes charm, has a clever gift for manipulating “facts” to suit his needs, and hides an always-simmering brutality. Mendoza plays both Kathy and Griselda as women with bald, ravenous ambition, and her glamorous Griselda (by costume designer Lex Liang as a black-hearted woman in white) is crazily dangerous even when she’s trying to be sociable.

Richberg and Anthony, both Carbonell Award-winning South Florida artists, make a great, convincing team as Diaz and Singleton. Someone should write a play built around the two actors. Both Rudi Goblen and Andhy Mendez take on a variety of roles, with Goblen especially memorable as a ruthless Marielito turned hit man named Miguelito and Mendez very funny as Vanegas, the clubgoer who inadvertently launches Rivi’s career as a hit man. Young Bryan Blanco (no relation to Griselda) plays the little-boy version of Rivi, the hit man’s son and others, ending the play with a chilling image that speaks to the legacy of gun violence.

New plays, it goes without saying, evolve throughout rehearsals and world-premiere performances. They get cut, revised, rewritten, and such changes are likely what slowed down or tripped up the actors a few times during Saturday’s opening-night performance, a night made slightly surreal by the presence of the real-life Singleton and Diaz, as well as Michael Corleone Blanco, the only surviving son of Griselda, who was murdered in Colombia in 2012.

“Confessions of a Cocaine Cowboy” has plenty to say about Miami’s bloody past and its present-day repercussions, about conflicts with and among different groups of immigrants, about the way innocence can be annihilated.

Corben and Alfred Spellman’s “Cocaine Cowboys” captured the unfathomable through news footage and interviews. Corben and Squire’s “Confessions of a Cocaine Cowboy” views some of the same people through the lens of theatrical art, finding linkages, interpreting actions and drawing unabashed conclusions. And if guns onstage make you jumpy, bring earplugs.