Review: Both musically and theatrically, ‘On Your Feet!’ at The Miracle is spectacular 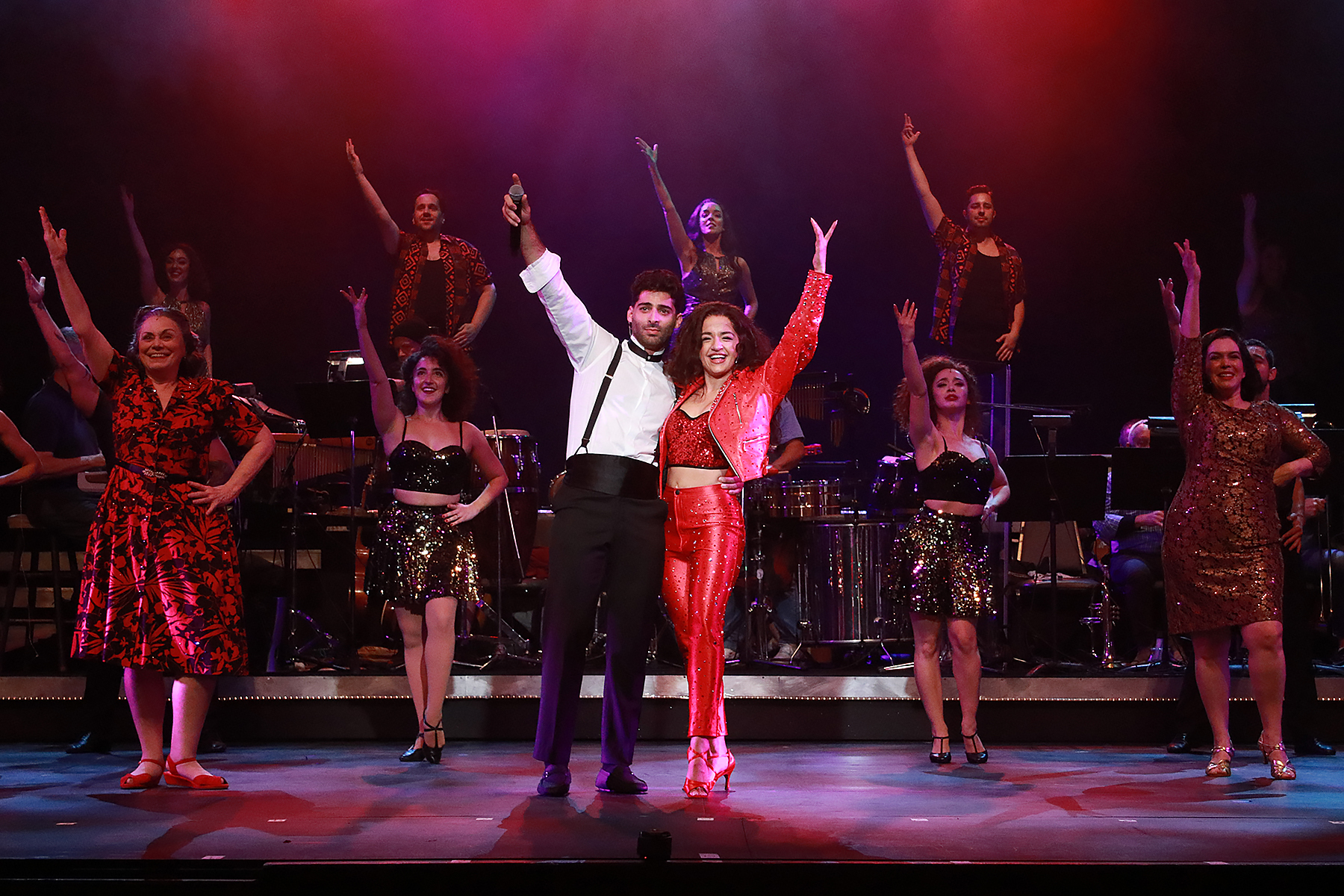 With Jason Canela as Emilio Estefan and Claudia Yanez as Gloria Estefan front and center, the cast of “On Your Feet!” gets ready for their bows at Actors’ Playhouse. (Photo/Alberto Romeu)

Joy, loss and unflagging determination coalesce at the heart of “On Your Feet!,” the inspiration-filled show about Miami’s musical power couple, Gloria and Emilio Estefan.

Blending biography with the extensive catalog of Gloria Estefan/Miami Sound Machine pop hits, the jukebox musical played Broadway from 2015 to 2017, then toured the country (including a weeklong stop at Miami’s Arsht Center for the Performing Arts), with additional productions in the Netherlands and on London’s West End.

But now, complete with an electrifying opening night that included the Estefans and their extended family in the audience, “On Your Feet!” has come back to the place where the Cuban-American couple made their crossover dreams come true.

After a lengthy pandemic pause and a pair of smaller shows, Actors’ Playhouse in Coral Gables has come roaring back with its own sizzling, large-scale production of “On Your Feet!”

Staged with abundant insight and finesse by Miamian Andy Señor Jr., who served as associate director of the Broadway production, the show at The Miracle Theatre in Coral Gables pulls out all the stops in celebrating artists who forged their own path to stardom.

Gloria Estefan’s mother, Gloria Fajardo, for example, earned a Ph.D. in Cuba but had to acquire a new set of education degrees in Miami to support her family: daughters Gloria and Rebecca, and husband José, a Cuban political prisoner who developed multiple sclerosis after serving in Vietnam. Before his elder daughter’s music career began to soar, he died at age 47.

Emilio Estefan fled Cuba as a teenager, first going to Spain where he and his father lived in poverty. They wound up in Miami where, as Emilio recalls in the show, signs posted at hotels and apartment buildings in the late 1960s read: “No Pets, No Cubans.”

Many more obstacles are highlighted in “On Your Feet!,” including Gloria Fajardo’s opposition to her multilingual daughter becoming Miami Sound Machine’s lead singer and marrying its ambitious keyboard player-producer; Emilio’s lengthy struggles to get American record companies to release songs the band recorded in English; a long estrangement from Gloria’s mother; and the horrible 1990 tour bus crash that fractured the singer’s spine.

And yet, “On Your Feet!” is a show filled with joy. Overriding everything is the couple’s enduring love story and the potent uplift of their music. 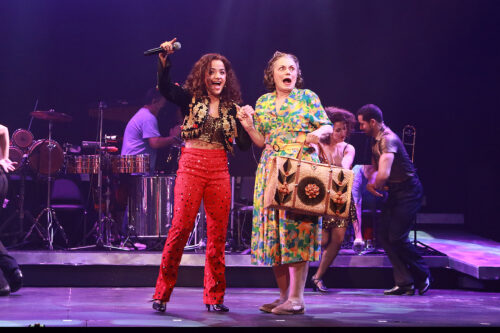 Claudia Yanez as Gloria Estefan welcomes Alma Cuervo as her grandmother, Consuelo, to the stage in “On Your Feet!” (Photo/Alberto Romeu)

As with any of the really good jukebox musicals – “Jersey Boys,” “Beautiful: The Carole King Musical,” “Ain’t Too Proud: The Life and Times of the Temptations” – “On Your Feet!” is a blend of musical theater and concert. Both musically and theatrically, the show at The Miracle is spectacular.

Downstage is where the scenes play out, where the dazzling dancers led by choreographer Natalie Caruncho and dance captain Hector Maisonet do their thing, often at breathtaking speed.

The large cast is led by Claudia Yanez as singer-songwriter Gloria and, making his professional stage debut, Jason Canela as producer-songwriter Emilio. Both actors clearly convey the strength and determination of their Grammy Award-winning, real-life counterparts, and both dynamically interpret their songs.

Former Miamian Yanez blossoms from a teen crushing on Emilio (as the shorts-wearing founder of the Miami Latin Boys) into a wife and mother certain she knows what’s best for her family. Her voice isn’t terribly similar to Estefan’s warmer, slightly lower instrument. But vocally, she shines on a gloriously long list of hits, including “1-2-3,” “Conga,” “Get on Your Feet,” “Live for Loving You” and many more.

The Hialeah-raised Canela has so far built his career in film and television, yet despite his newcomer status, he seems equally at home onstage – commanding, even. He’s a fine dancer, an even better pop singer (crooning “I See Your Smile,” “Here We Are” and “Coming out of the Dark” with Yanez, a pained “Don’t Wanna Lose You” and, with Eileen Faxas as Gloria Fajardo, “If I Never Got to Tell You”) and an absolutely charismatic actor.

In addition to the leads, the talent in the Actors’ Playhouse company runs deep.

Alma Cuervo, who originated her role on Broadway and performed it on tour, is an absolute treasure as Gloria’s grandmother, Consuelo, a woman with abundant wisdom and a great sense of humor. Ex-Miamian Faxas combines tempered dominance and disappointed judgment in her portrayal of Gloria Fajardo opposite ensemble member Adriel Garcia as the singer’s father, José. She sparkles in the character’s might-have-been moment in the spotlight as she sings “Mi Tierra.”

Katerina Morin sings appealingly in Spanish as young Gloria, while flashy dancer Zachary Roy plays the young Emilio and the Estefans’ son, Nayib. Ensemble member Seth Trucks demonstrates his versatility in playing a stubbornly obstructionist record producer and a caring doctor. The always impressive Henry Gainza (who has already moved on to his next show, Billy Crystal’s upcoming “Mr. Saturday Night” on Broadway) added his gorgeous vocals to the mix through opening weekend. 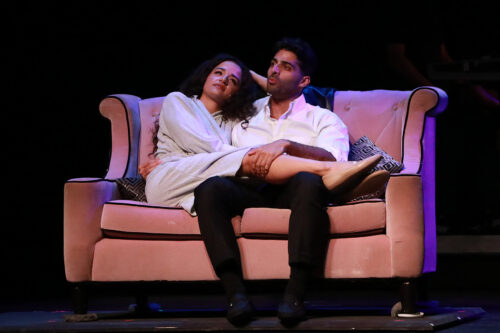 Designer Eric Nelson’s lighting palette is as colorful as the show’s music, and sound designer Shaun Mitchell delivers everything from tender ballads to explosive pop hits with clarity.

One quibble from opening night: The name-dropping list of ’80s radio stations and clubs didn’t land with quite the hometown bang that it should have because some got lost in the frenzy of actors frantically pitching Miami Sound Machine’s English-language “Dr. Beat” to DJs and club owners.

Presidential Medal of Freedom recipients in 2015, the Estefans are continuing their multifaceted careers as artists and entrepreneurs. Gloria Estefan, who became the first Cuban-American Kennedy Center honoree in 2017, will next be seen onscreen in the remake of “Father of the Bride” opposite longtime friend Andy Garcia. Artistically, the couple has played a huge role in bringing Latin music into the mainstream. Philanthropically, the two have given back over decades to the community and country that became theirs.

Although they weren’t involved in this new production, in sharing this musical story, they’re giving back yet again.

At The Miracle, Miami-connected, Cuban-American artists have brought a resonant celebratory tale to life, sparking joy in themselves and their audiences. Coming out of the dark that was the pandemic, they’re also helping the team at Actors’ Playhouse get on their feet with the kind of large-scale show that built the company’s reputation. Qué maravilloso.

COST: $55-$85 (seniors age 65 and older get 10 percent off weekdays only, students
age 25 and younger with valid student ID pay $15 for a rush ticket available 15 minutes
before a weekday performance)

SAFETY PROTOCOLS: Proof of vaccination or a recent negative COVID-19 test or COVID-19 Antigen test required; masks required except when eating or drinking in designated areas. For details, visit actorsplayhouse.org/actors-playhouse-health-and-safety-policy.

To read Christine Dolen’s preview for this show, click here.