Review: At its best, ‘Long Distance Affair’ fully immerses you in different worlds 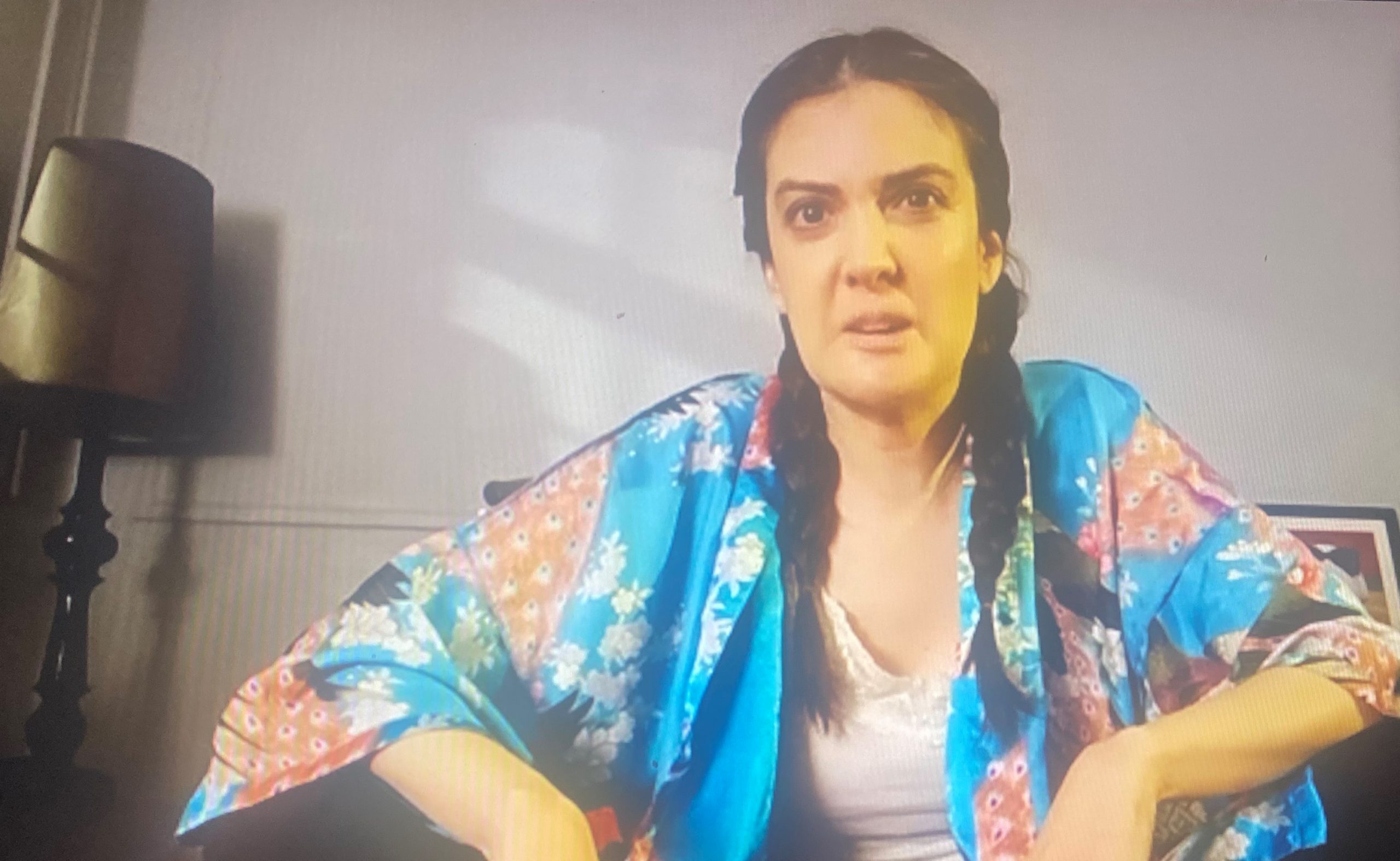 Accessible in a pair of three-play programs running Feb. 18-21, the six, new short works aim at making a genuine if fleeting connection between the actors who are performing in their far-flung homes and the small groups of spectators who are watching – sometimes interacting – from theirs. For the most part, this artistic mission is accomplished.

In Dipti Bramhandkar’s “Mrs. Asha’s Benevolent Purposes and Small Causes Musical Medium Services (M.A.B.P.S.C.M.M.S.),” hands-down winner of the short play with the longest title, Neha Singh plays a Mumbai-based medium whose gift is something called “clairaudience” – the ability to perceive inaudible sounds and tones emanating from each person, a kind of collective music.

Directed by former Miamian Tai Thompson, Bramhandkar’s portrait of a woman unexpectedly freed from the bonds of an arranged marriage provides a vivid sense of place, in part because of the musicality in the way Singh conveys the sounds of everyone from street vendors to Mrs. Asha’s judgmental relatives. 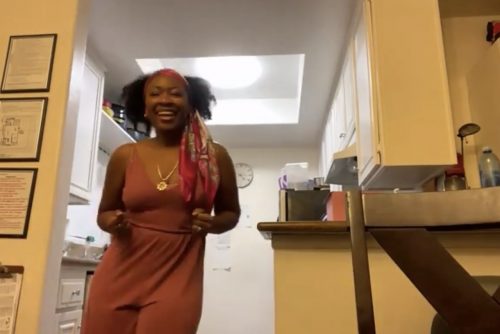 The writing is observant, evocative, amusing, as when Mrs. Asha describes the object of her now-absent husband’s affections: “She was so young she practically had dew on her.” A twist at the end plays with our perceptions of Mrs. Asha, the life-enlightened medium, and of the storytelling medium itself.

A second Thompson-directed play, “Angelique,” by ex-Miamian France-Luce Benson, centers on a Haitian-American movie studio seamstress living in Los Angeles. As the title character, actor Wendy Elizabeth Abraham begins by joyfully expressing her sensuality through dance, then taking us into her kitchen where she’s preparing a pot of sacred soup joumou as an offering to Erzulie, the voudou goddess of love and womanhood.

Benson’s story touches on Haitian history and spiritual practices, as it delves more deeply into Angelique’s desire to add a child to her happy marriage. That longing, as it happens, is rooted in sudden loss. Abraham’s sobbing, keening pain as she shares that part of Angelique’s story makes you wish you could breach the boundary of the digital world to enfold her in a comforting embrace.

At his home and studio in Lagos, Nigeria, actor Segun Adefila deals with the ordinary and extraordinary in Zainabu Jallo’s “Bariga Spirit.” Deep into a hot night, he welcomes observers into the home/studio he shares with his wife and four children, one of whom sleeps soundly on the floor of the room where Adefila is holding forth. 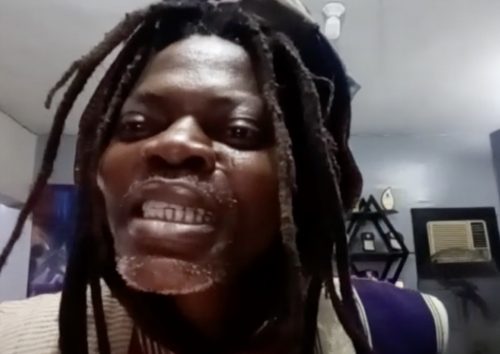 Segun Adefila pleads his case to his ancestors in “Bariga Spirit,” set in his home and studio in Lagos, Nigeria. (Photo courtesy of Juggerknot Theatre Co.)

Under the direction of PopUP cofounder Ana Margineanu, Adefila pleads his case to us, stand-ins for the Yoruban ancestors/spirits beckoning him back to his birthplace to take up long-abandoned, sacred royal duties. Through ritual, movement and drumming, he makes an artfully persuasive argument that big-city life as an artist, husband and father is his true calling.

Leila Buck’s “Night Lights,” directed by Tracy Cameron Francis, takes the form of a nighttime, virtual, core connection class – equal parts dance and connective spirit – taught by a Beirut-based instructor named Layla (Pia Haddad). Although she’s encouraging and engaging, scripted interruptions bring the flow of the piece to a halt in ways that are more irritating than illuminating, leaving the actor and her audience literally in the dark.

Francis is also the director of the intense, stylistically bold “the break,” by another former Miamian, Michael John Garcés. In it, an increasingly agitated woman (Barbie Wu) conveys her fears as she hides out in a bedroom at her parents’ home in a suburb of Portland, Ore. Speaking in a rush of the election, the virus, violence in the streets, she sounds paranoid bordering on crazy – but is she?

Garcés, Wu and Francis take those watching on a wild, science fiction-tinged ride.  Wu’s rapid-fire monologue taps so quickly into the disruptive emotions and events of the present – even as it imagines a future that is simultaneously heaven and horror and hell – that the impact of the piece is visceral. 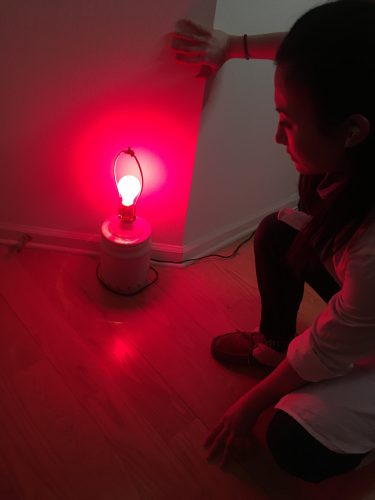 Barbie Wu is an increasingly agitated woman in “the break,” by Michael John Garces, a “Long Distance Affair” play with a sci-fi element.(Photo courtesy of Juggerknot Theatre Co.)

Mexican playwright-director Alfonso Cárcamo’s “Troya,” translated and performed by Naomy Romo with direction by Henrik Cheng, is an emotionally charged exploration of an unhinged woman’s grievances, particularly toward the man whose violent act changed her life. She smiles, she cajoles, she reaches for words that are vividly vulgar and ones full of imagery. Is she crazy? Perhaps; as one watcher suggested in a chat reaction, “la luna llena” (the full moon) seems to be having its way with her.

Even so, Romo’s performance and her finesse at utilizing the digital medium to establish intimacy make us feel for a woman on the verge of a horrific act. Like all the best work in “Long Distance Affair,” Cárcamo’s play fully immerses you in a specific world, one that somehow feels simultaneously foreign and familiar.