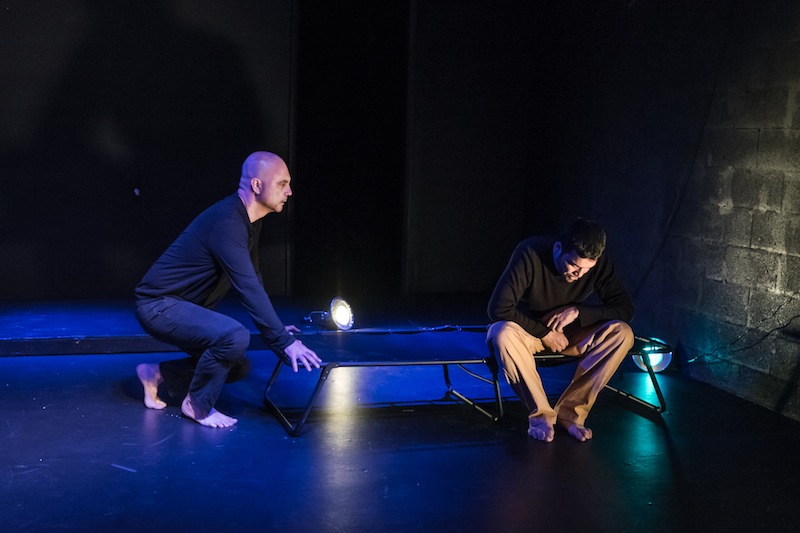 Azul Tirreno, the latest production by Antiheroes Project in collaboration with Artefactus Cultural Project, imagines the last day in the life of aviator and writer Antoine de Saint-Exupéry, whose plane disappeared over the Mediterranean Sea in 1944. Written and directed by José Manuel Dominguez, the founder and artistic director of Antiheroes Project, Azul Tirreno reminds us that every man is a mystery.

Performed in Spanish with English supertitles, Azul Tirreno, or Tyrrhenian Blue: The Last Day in the Life of Antoine de Saint-Exupéry, refers to the Tyrrhenian, the part of the Mediterranean Sea where Saint-Exupéry is thought to have disappeared. It is an ambitious and inventive play. Dominguez wisely alludes to Saint- Exupéry’s classic book The Little Prince without leaning too heavily on the best selling work. His concern is Saint-Exupéry the man, a complex, often contradictory, character. Dominguez has carved out an intriguing psychological portrait and Fernando Goicochea gives an excellent performance as Saint-Exupéry — or Tonio as he is called throughout the play. One central theme to Azul Tirreno is how Tonio’s obsession with flying and risk taking contradicts his sense of loneliness and isolation. A physically energetic performer, Goicochea skillfully depicts Tonio’s many facets as a boy, pilot, and husband.

This is a talented cast. Yerandy Bassart plays André, the mechanic who is with Tonio when they crash and almost die in the Saharan Dessert, with humor and nuance. Juan Echeverri vividly portrays Henri Guillaumet, a famous aviator and intimate friend whose death haunts Tonio. Romina Musach plays Tonio’s frustrated wife with passion, and Belén Curiuni depicts his devoted mother with subtlety.

Dominguez has conceived and written a well-rounded script. Azul Tirreno possesses many lyrical moments, but it is also well informed by history. For example, we find out that Saint-Exupéry travelled to Washington D.C. to convince the United States to get involved in World War II. One of the highlights of Azul Tirreno is the recorded soundscape layered with the live sounds of musician Zayra Mo’s quartz bowls, which emit haunting, sorrowful vibrations. The soundscape envelopes the play with the mystery and mysticism so fundamental to Tonio’s character.

At one hour and twenty minutes, Azul Tirreno drags a bit, especially in the middle. Trimming the dialogues and letting this agile and physically adept cast engage in a little more expressive movement would leaven some of the heavier moments. The actors could say a little less and the emotions they convey would be all the more powerful. An example of this is the very compelling underwater scene.

Dominguez is a talented writer and a keenly perceptive director. He and Goicochea have formed a group of actors who train and perform with a deep camaraderie that radiates on stage. Thankfully, Azul Tirreno doesn’t attempt to solve the mystery of Saint-Exupery’s death, but rather it mines the rich territory of his life, reminding us that while death may be an eternal theme, a life intensely lived makes for good theater.