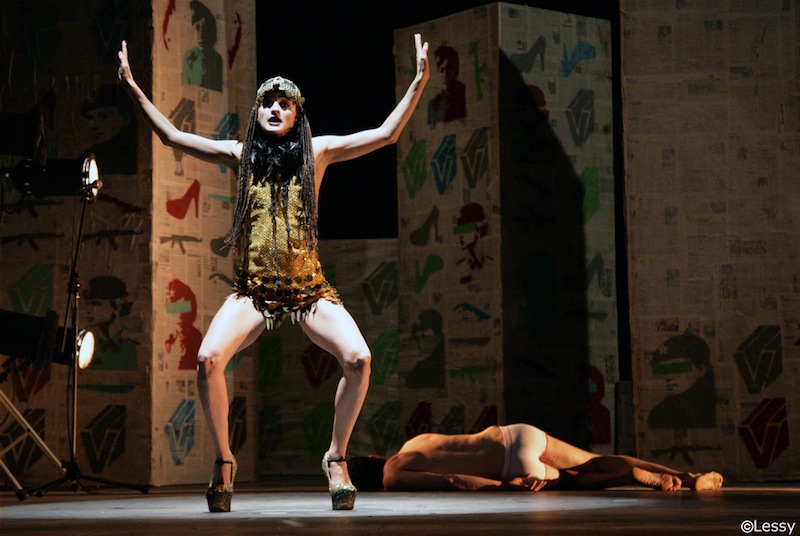 Havana’s internationally celebrated El Teatro Publico and its director Carlos Diaz presented Antigonon, its reimagining of the classic Antigone tale, to a sold out audience at the Black Box theater at the Miami-Dade Auditorium last weekend. Indeed, so many South Floridians wanted to see the show that an extra performance was added.

In Antigonon, as in the Greek classic, a hero has no place to rest. Actually a whole lot of heroes can’t rest, for Antigonon takes a good hard look at Cuban history from the dreadful Wars of Independence forward. If Cuban heroes have no place to rest, neither does this five-member cast, as it works through dozens of different characters, and their monologues along with lightening quick on-stage costume changes. The cast certainly lived up to El Publico’s reputation, perhaps more in this production for their athleticism and range of movement. For if neither heroes nor cast have a place to rest here, neither does the audience.

The production opens with two duets and silence: Perhaps one of the pair, as in Antigone, it is a sister carrying the body of her brother. Those moments of silence will be the last for the duration of the play.

The monologues begin as does the streaming archival footage that serves as the back-drop and only stage set. Any one of these monologues — all but one about betrayal by the revolution — might be heart-breaking, let alone infuriating and plenty more. But back to back to endless back they become exhausting, and perhaps even more sadly, numbing.

“How could such ruins ever be created?” asks one character. There are toughs and whores, and those who have little choice but to become toughs and whores. There are uniformed school children reciting Party tracts on education, tracts as cynical as they are manipulative. Betrayal is shouted all around. The broken aging hunchback known as “Patria” recalls there was once a dream. A woman of color might be referred to as “Senora.” For the first time during the performance, betrayal becomes poignant, multi-dimensional.

Even as the monologues raged on, so did the archival film clips. Much of it was so fascinating, it was easy to forgive its more than occasional lack of clarity. The issue here, as in the monologues themselves, was in the pacing. Images of battle and destruction didn’t stop.

The highpoint of the show, for this reviewer, may have been a cabaret scene done in drag. The perfect coquette sings about the great sugar fiasco of the 1990s. He/she is rhapsodizing of the great love with which companeros approached the cane. “I am a machete cutter,” the singer intones delighted with her would-be hips and broad double-entendres.

With this monologue, the audience was able to sit back for a moment and add their own memories to the mix. Antigonon depends on its audience knowing dozen upon dozen Cuban references. Here as a coquette frolics, one might remember stories of maestros from the national orchestra who urinated on their hands to try to protect them while cutting the cane. Stories of neurosurgeons coming home having lost fingers. The stories are without end. One wonders if the performance could have employed a more subtle, spacious path.

The same is true in the handling of the island’s famed sensuality/ sexuality, although academics may argue who imposed what on whom. In one monologue set to a bolero, a woman wishes for a flower while the fondling her clitoris and licking her fingers. Potent sure, in single doses. Clitori were fondled and licked so many times in so many monologues that the gesture became gratuitous.

Besides the extraordinary athleticism of the actors, it is the costume designers Celia Ledon and Robertiko Ramos who take the day. In one monologue, a bride is wearing a gown of pearls and lace glorious from another era; the dress is cut vertically; as she turns the audience realizes the bride is half-naked. The effect is disarming, even in a performance as awash in nudity as is this one. In another monologue, a woman uses soda cans as curlers. One can see this sort of invention all over the streets of Havana. But the designer here goes further; a few more cans dangle deliciously over the hem of the wearer’s wee skirt. The audience did rise to their feet at the end of the performance. But one wonders if it was in appreciation of the spectacle and energy that was Antigonon more than anything, except, of course, solidarity with the suffering of Cuba.

Antigonon attempts to take on the weight of Cuba’s unresolved history. Small surprise then that this production feels, finally, so unresolved, so heavy.