Review: Along with laughs, Summer Shorts supplies food for thought 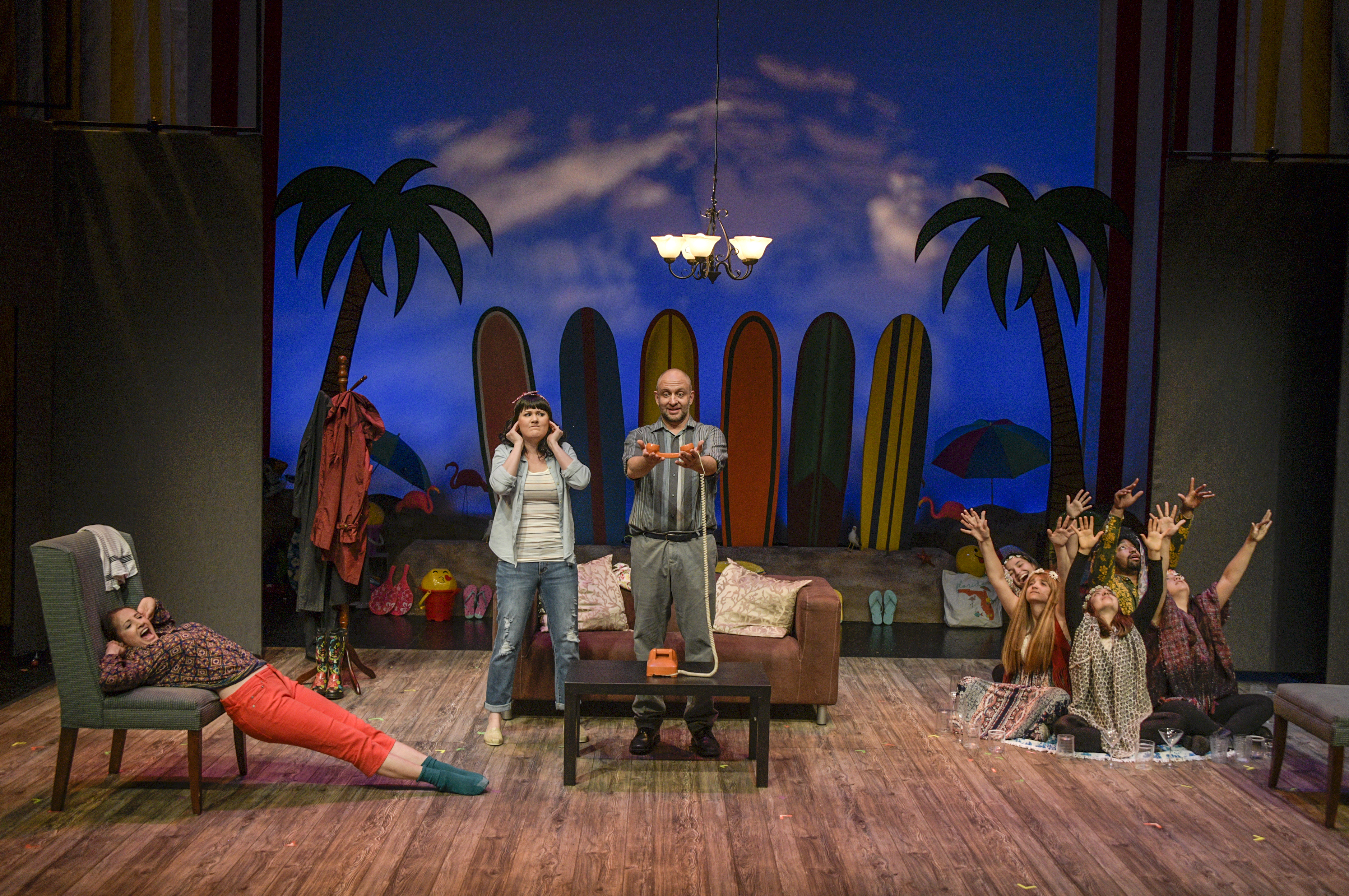 Miami’s City Theatre has much more programming than most people realize, including an upcoming production of Bekah Brunstetter’s full-length comedy “The Cake” Dec. 5-23. But the company’s legacy production, its theatrical bread and butter, is the annual Summer Shorts.

This year’s 24th edition of the festival, running through June 23 in the Carnival Studio Theater at the Adrienne Arsht Center for the Performing Arts, has plenty of serious topics underpinning even its comedies. Aging is one. Climate change is another. Tensions between the black community and police, sexual harassment, job stress, self-worth, and the joys and heartbreak of life are among other concerns of the playwrights, lyricists and composers of this year’s collection of six short plays and two musicals.

Summer Shorts 2019 begins and ends with its musicals. In Preston Max Allen and Will Buck’s whimsical “Franklin Pierce: Dragon Slayer,” playfully directed by Michael Yawney, Richter plays Jennifer, an eighth grader who is massively annoyed that she’s been assigned a presentation on a guy she sees as America’s dull and flawed 14th president. Pierce (played by Reiff) makes a sudden cameo in Jenn’s girlie bedroom, looking every inch like the portrait of the president (kudos to costume designer Ellis Tillman). The strong actor-singers comedically grapple with what Pierce absurdly claims as his secret achievement, but the message of self-acceptance gives what could otherwise be a silly piece more weight.

Weiner, heavily made up like a condo denizen with failing eyesight, is forever wry as Elsie takes us back to her glory days as a chorus cow (Corey is the ingenue version of Elsie), her meeting with the studly Elmer (Jacobs) and his disturbing demise, and the highs and lows of her life as a celeb. Rollins packs every cow joke imaginable into her book and lyrics, Tillman goes udderly nuts with the cow costumes, and the entire cast plus interns has a blast hoofing to Sandra Portal-Andreu’s choreography. Goofy? For sure. But “Big Fat Cow” is a mooooosical with a heart. 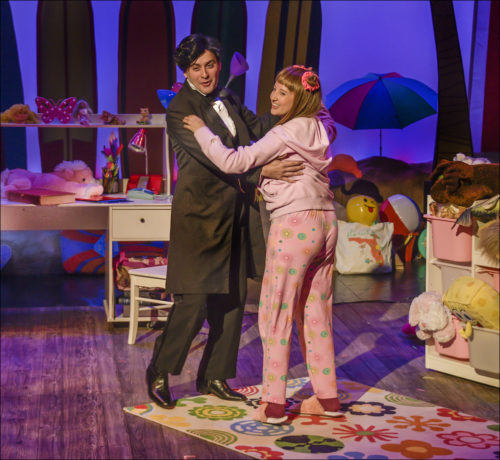 Ian August’s “Frozen Foods,” staged by Yawney, demonstrates that an existential crisis can happen in the most mundane of places. Shopper Linda (Patrice) finds her friend Carol (Corey) frozen in place over a case of TV dinners in their supermarket’s frozen-food aisle. Carol’s musings about life and existence turn increasingly cosmic as Linda tries to snap her back into reality, only to have a moment of empathetic enlightenment at the end. Both actors take the audience to that place where our minds go when the minutiae of life turns overwhelming.

Arguably the strongest play in Summer Shorts, Jeff Locker’s “The Forgotten Place” is structured as a job interview, with Eric (Jacobs) considering applicant Kipp (Reiff) for the position of his best friend. Paced flawlessly by director Gladys Ramirez, the conversation imagines the progression of the men’s friendship, the good and the bad and the ugly moments all acknowledged, until the day one of them dies. Although the characters begin the play as strangers, Jacobs and Reiff are so persuasive and moving as they navigate the twists and turns of Locker’s imagination that the journey seems far more profound than its 10-minute running time.

Commissioned by City Theatre and directed by Andy Quiroga, Steve Yockey’s “Telephones and Bad Weather” is a climate-change play with a biblical foundation. When neighbor Lavern (Richter, hilarious vocally and physically) comes calling during a torrential storm, she can’t help noticing that her frazzled friend Brenda (Corey, whose work in each piece is impeccable) has a knot of chanting, hippielike disciples sitting on her living room floor. It seems that Brenda’s hubby, Scott (Weiner), responding to some deafening phone calls from the Almighty, is out back building an ark, though his professional qualifications are nil. Brenda has had it — until the bell, finally, tolls for her.

Jen Diamond’s “This Is How Ghosts Speak,” staged by Ledford, is another kind of theatrical ghost story. With no ghost light in sight and a persistent power outage, maintenance guy Walt (Weiner) and theater administrator Jessie (Patrice) take flashlights to the basement to try to get the juice flowing again. When hipster intern Molly (Richter), who describes herself as a “necromancer,” suddenly pops up, things take a spookier turn. With flashlights carried by the actors as the only illumination, “This Is How Ghosts Speak” uses limited sight and sudden sounds in a fascinating way.

Lia Romeo’s “The Presentation,” also directed by Ledford, features Corey as Samantha Friedman. She’s an HR executive delivering a training session on workplace sexual harassment to an audience of Vikings whose MO is to rape, kill and pillage when their travels take them to new places. The juxtaposition of an earnest, determined contemporary woman and a bunch of tone-deaf barbarians — Weiner, Jacobs, Reiff and intern Zye Reid play the Vikings — creates the comedy. 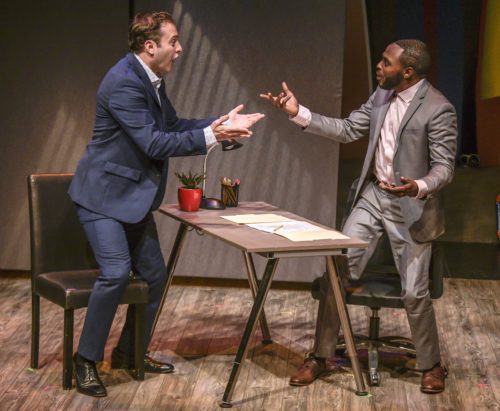 This year’s most intense play is Greg A. Smith’s “Schrödinger’s Gun,” staged by Ramirez. (The title is inspired by physicist Erwin Schrödinger’s famous thought experiment.) Roland (Reiff), an aspiring cop who hasn’t exactly been acing his training, has been taken to a mysterious remote location. Freeman (Jacobs), a black officer adept at making Roland nervous, raises the stakes from the get-go, as the rookie’s supervisor, Griggs (Patrice), looks on stoically. At an excruciating point in the training exercise, Roland must decide in a split second whether to shoot Freeman, as the latter and Griggs shift their voices and body language to transform into a black couple staring down the wrong end of the trainee’s gun. For all its brevity, the disturbing play digs deep.

Traditionally, Summer Shorts is all about escape, entertainment and frivolity. This year’s offerings deliver on that level, but theater lovers who prefer a bit more to chew on thematically will leave satiated, too.