Review: A Tragedy as Timely as Ever 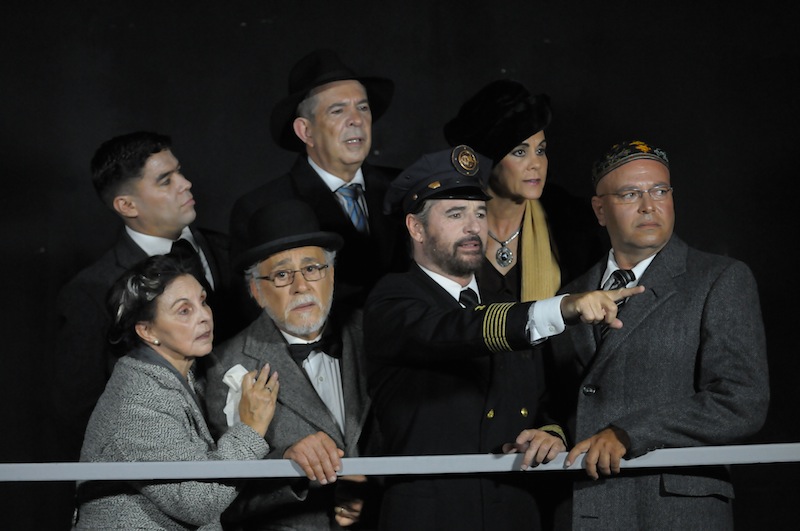 El puerto de los cristales rotos (The Harbor of Broken Glass), co-written by Mario Ernesto Sánchez and Patricia Suárez, is based on a disturbing historical event. In 1939 Cuba denied entry to the 937 passengers (mostly Jewish refugees fleeing Nazi Germany) aboard the MS St. Louis when the ship arrived at Havana harbor. From there they tried to dock off the Florida coast, but President Roosevelt ordered the U.S. Coast Guard to block the ship and the refugees were turned away. The ship’s captain, Gustav Schroeder, managed to negotiate with several European countries to receive the refugees, but it is estimated that at least one quarter of the ship’s passengers died in Nazi concentration camps.

Directed by Sánchez and launched as part of the 31st International Hispanic Theatre Festival of Miami, The Harbor of Broken Glass, performed in Spanish with English supertitles, is a painful reminder of the United States’ long history of turning away refugees.

No matter how devastating the historical event that inspires the story, the play is the thing. We must care about the characters and dramatic action as much as the historical event in which they are entrenched. Luckily, this top-notch cast brings the script to life. El puerto primarily centers around two couples. Gerardo Riverón is hilarious and heartbreaking as Avram Berman, a violinist, and the play’s neurotic soothsayer. Berman is sure that the ship will not be allowed to dock in Cuba and much to the chagrin of his doting wife Lina (played by Alina Interián), he’s happy to tell it to anyone who will listen. Through Berman’s fits of anxiety and blustery outbursts, the play explores the idea of the persecuted Jew. Interián and Riverón’s spot-on timing conveys the loving antagonism of an old married couple, lending comic relief to the play’s seriousness.

In contrast, the relationship between Vera Kaufman (Marilyn Romero) and Dr. Joseph Feivel (Julio Rodríguez) is charged with tension from the very beginning. The couple lost a child, separated, and are trying to piece their relationship back together. Add to that the appearance of a bachelor, Chaim Goldenberg (Carlos Acosta-Milián), who takes a shine to Vera.

Juan David Ferrer is very convincing as Captain Schroder, the play’s only historically accurate character. As a non-Jewish German who sympathizes with his passengers, the captain’s moral dilemma is clear from the beginning, but several tense exchanges with Nazi sympathizer, Boris (Alexis Roa) emphasize the captain’s struggle.

Romero portrays Vera, the former actress who longs to return to the stage, with nuance and energy. Her character is high strung from the beginning, but by the end of the play, she is truly a woman undone. In that sense Vera truly embodies the play’s steady descent towards tragedy.

El puerto’s set design, lighting, and eerie music resourcefully imbued the black box space of the Arsht Center’s Carnival Studio Theater with the largess of the massive MS St. Louis. There are some moments where history lessons feel too overtly voiced in the dialogue, but this is a well-executed play of great historical import. Thanks to the internet we can’t get away from atrocities underway in Syria, Latin America, and elsewhere. The irony of Cuba and the U.S. aligned in an immigration policy that turns away some of the world’s most vulnerable citizens will not be lost on contemporary audiences.

It is an unfortunate reality that Harbor of Broken Glass is as relevant today as it was in 1939. For those who missed the festival, El puerto de los cristales rotos will have an extended run at the Miami-Dade County Auditorium in February; miamidadecountyauditorium.org.