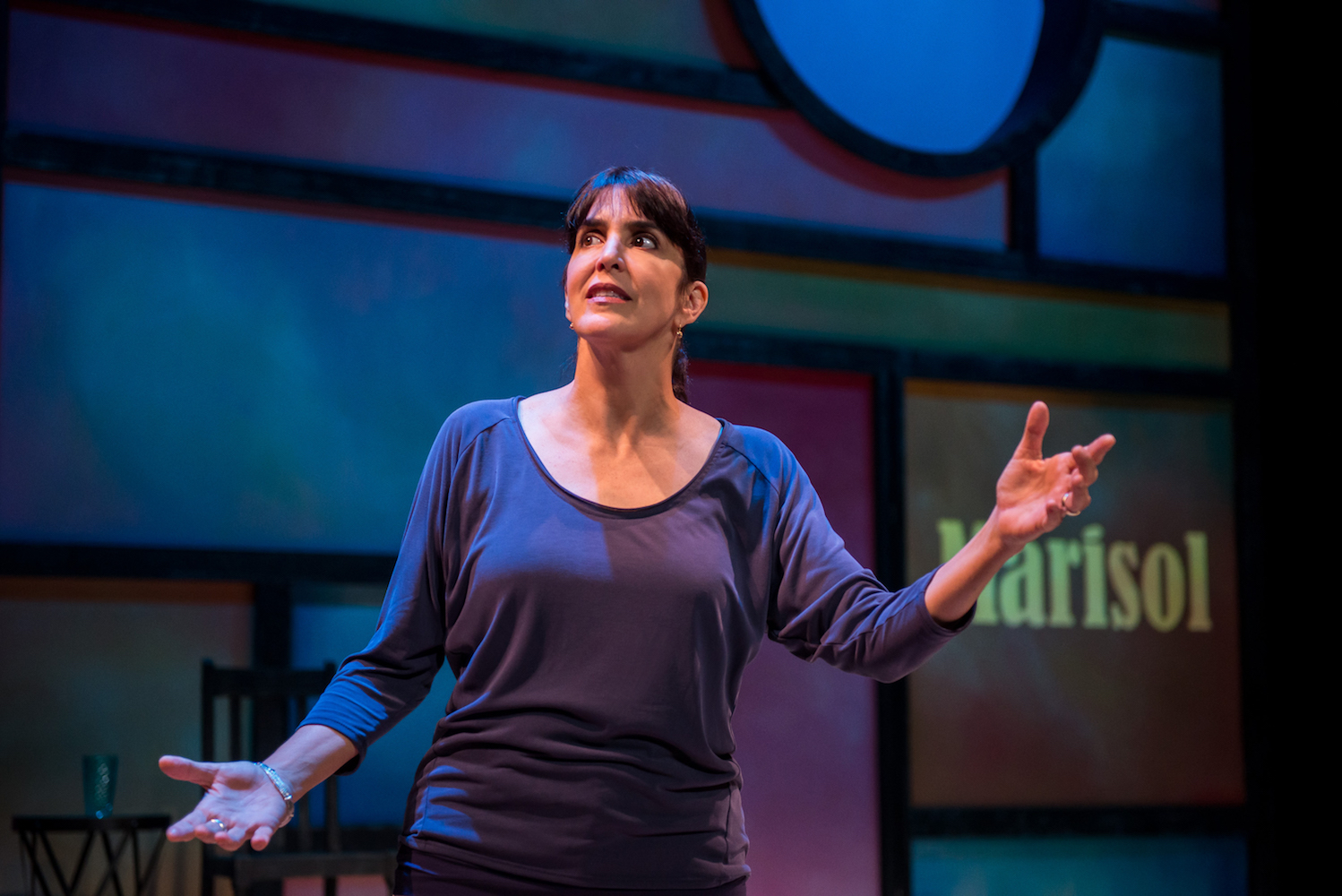 Elena María García plays an event planner and 20 other women in “¡FUÁCATA! or A Latina’s Guide to Surviving the Universe,” an Actors’ Playhouse production at The Miracle Theatre in Coral Gables. (Photo courtesy of Justin Namon)

Throughout the long days and months, and more than a year since COVID-19 so vastly altered our lives, those who love the arts have persevered through isolation and the consolation of online entertainment, clinging to a dream: that gathering safely inside a theater would become possible again.

For Actors’ Playhouse at The Miracle Theatre in Coral Gables, the time for that reunion of artists and audiences is now.

The company is taking a carefully considered step back into the realm of mainstage theater with “¡FUÁCATA! or A Latina’s Guide to Surviving the Universe.” Cowritten by Elena María García and Stuart Meltzer, performed by García and directed by Meltzer, the solo show got its Zoetic Stage world premiere at Miami’s Arsht Center for the Performing Arts in 2017, then returned there for a second run in 2018.

Running now in The Miracle Theatre’s 600-seat mainstage theater through mid-September, this third iteration of the 90-minute “¡FUÁCATA!” has been tweaked and minimally trimmed, but it remains the work of the original creative team: García, Meltzer, set designer Michael McKeever, lighting designer Rebecca Montero and sound designer Anton Church.

Watching the show in a traditional proscenium space vs. the more intimate black box where it premiered is a different experience. Given the Delta variant, surging COVID cases and the contentiousness over vaccinations, Actors’ Playhouse has to put safety first. Masked theatergoers are scattered throughout the auditorium, with space in between, which means the crowd’s spirited communal response to the work is necessarily dialed back.

Even so, the brilliant García demonstrates yet again just how powerful a single performer can be.

A three-time Carbonell Award-winning actor, García is one of theater’s funniest women, an artist with the chameleonic abilities of Lily Tomlin and physical prowess of vintage Lucille Ball. She’s a master of improv comedy – she coached the company and performed in “Zoetic Schmoetic,” an outdoor improv show earlier this year at the Arsht’s Thomson Plaza – and she’s also a deft and moving actor.

All of those skills come into play in “¡FUÁCATA!,” which takes its title from a Cuban slang term meaning a back-handed slap. 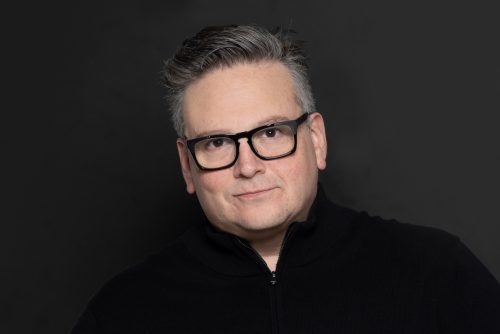 Stuart Meltzer is director and coauthor of “¡FUÁCATA!” (Photo courtesy of Justin Namon)

The piece works so well because its roots are deeply personal, yet the myriad subjects it takes on are universal, particularly if you happen to live in melting-pot Miami. Lasting love and transactional attraction, assimilation and enduring pride in one’s heritage, intergenerational conflict, the pressure women feel to excel in multiple roles – all are part of García’s resonant love letter to Latinas.

The play’s key character is a Cuban-American event planner named Elena Flores, whose namesake company is called Elena Plans Big Things. As she explains up front, she’s a “super Latina superhero” (wife, mom, working professional and at least a dozen other things) who could no more function without her trio of daily “cafecitos” than her car with its misbehaving seatbelt could run without gas.

As Elena moves throughout her day, we meet two dozen other characters, most of them Latinas, with a couple of guys and non-Latina ladies tossed into the mix.

With an assist from sound and lighting effects, sometimes with a new character’s name projected onto McKeever’s Mondrian-inspired set, García transforms flawlessly into some very different women.

Elena’s Mami, for example, is an old-school Cuban matriarch who expresses love via her from-scratch cooking and has dinner prepared by 10:30 a.m. daily. Estrella, who rules the takeout roost at Elena’s beloved La Isla Café, confides that she was an accountant at the Tropicana in Havana – and that she enjoys lording it over her caffeine-desperate Miami customers. Marisol, who sells chilled bottled water at southwest Eighth Street and 27th Avenue every day, tells a harrowing story of escaping the threat of violence and death in Honduras at age 17, riding atop a train racing through Mexico, walking the last 70 miles into the United States, then being smuggled from Texas to Miami.

Another character, Beatrice Goldberg, the quintessential Jewish matron, is using Elena (whom she calls “Ellen”) to plan a 50th anniversary party in celebration of a not entirely blissful union with her once-hairy hubby, Murray. For entertainment, she’s thinking Elena can book Graciela, an out-there Spanish performance artist whose act is, at its tamest, R-rated.

Sandy Holmes, the power-crazed new Parent-Teacher Association leader at the Gloria and Emilio Estefan Middle School that Elena’s daughter attends, reveals her Trumpian stripes in comments about English-as-a-second-language students and the diverse cultures represented at the school’s International Day celebration. 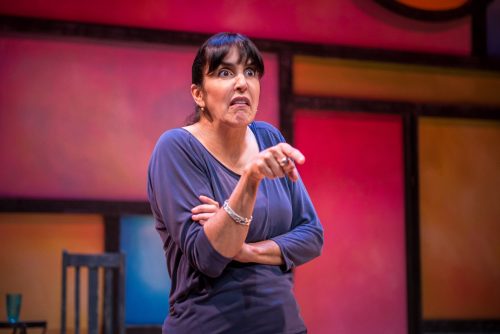 Monica, who has spent most of her adult life running from her Mexican heritage, frets about how to reply when her 11-year-old asks why immigrant kids are being put in cages.

García and Meltzer cover a spectrum of Latina life in Miami – much of it funny, some painful, all of it rich in specific detail. Some of those details are drawn from García’s life and repurposed; for instance, the about-to-retire teacher Mrs. Puig says she arrived in the United States as a kid via a Pedro Pan flight on Feb. 22, 1962.  That’s the date García’s parents got married.

The dialogue blends English and rapid-fire Spanish, though the latter is always restated or paraphrased for the monolingual “que no hablan español.”

South Florida’s return to live performance will be happening throughout the fall and into winter. How successful that will be is as unpredictable as COVID-19 itself. But theater fans yearning to go back to their happy place should know this: Inside The Miracle Theatre, thanks to a masterful performer and the insightful “¡FUÁCATA!,” a gem awaits.

WHAT: “¡FUÁCATA! or A Latina’s Guide to Surviving the Universe,” by Elena María García and Stuart Meltzer