Revenge and dinner are served in Faena Theater’s Immersive ‘The Cook, The Thief, His Wife & Her Lover’ 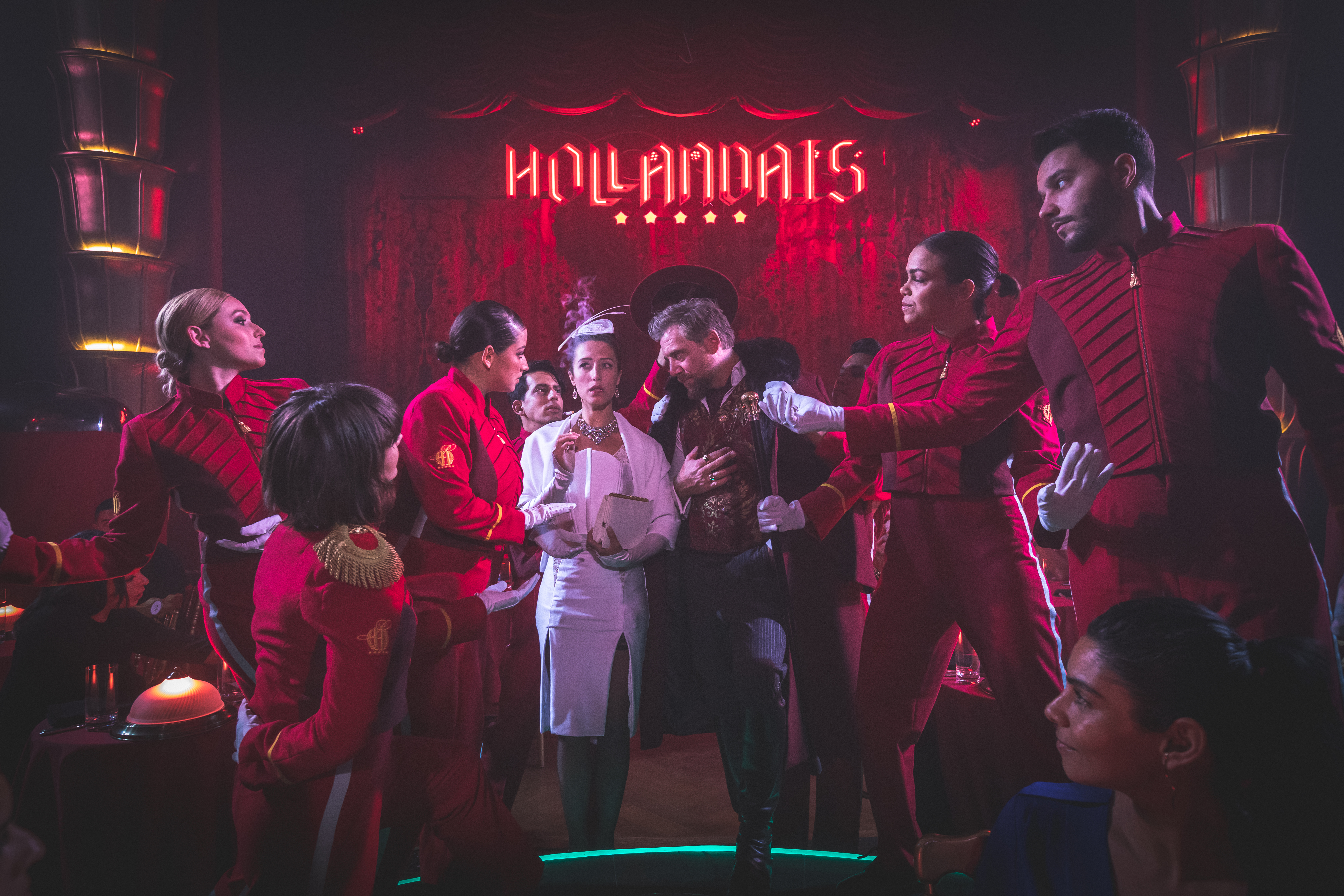 Immersive theater is having way more than a moment in Miami, thanks to the ongoing success of Juggerknot Theatre Co.’s original “Miami Motel Stories” productions and “Amparo,” which closed last month after multiple extensions.

Now the Faena Theater at Miami Beach’s Faena Hotel is adding to the immersive trend with a lavish production of “The Cook, The Thief, His Wife & Her Lover,” adapted by playwright Scott Gilmour from the 1989 Peter Greenaway film.

If you know the movie – a work of cinematic art that was also intensely sexual and graphically violent (Miramax released it unrated rather than go with an X rating) – you may well wonder just how such a story could be turned into a piece of musical theater with a running time of under two hours and a three-course, Michelle Bernstein-devised dinner included. After all, the show’s promotional pitch sells it this way: “Revenge is a dish best served cold. Do you have the stomach for it?”

The short answer to the how-is-this-possible question is that Faena’s “The Cook, The Thief, His Wife & Her Lover,” created in collaboration with Unigram Theatrical, carefully walks a line between paying tribute to the original and nearly (but not quite) sending it up.

Thus, you don’t get full nudity in the athletically sensuous love scenes between the Wife (Kristin Guerin) and the Lover (Parker Murphy), nor are you forced to endure believably horrific violence as the Thief (Donal Brophy) and his thugs execute Leonardo Soroko’s fight choreography to exact deadly revenge on the Lover.

Parker Murphy and Kristin Guerin perform a sensuous dance amid the diners of Le Hollandais in “The Cook, The Thief, His Wife & Her Lover.” (Photo courtesy of Faena Hotel Miami Beach)

So you can safely savor both the show and Bernstein’s menu: deconstructed ceviche to start; Wagyu Short Rib Beef Wellington as the main course; and a chocolate sphere dessert that you smash open with a small wooden mallet to reveal an oozing bloody berry filling. A vegan menu is available.

The action takes place on the evening of Oct. 13, 1989, a nod to the Greenaway movie’s London release.

Set designer Kenneth MacLeod has transformed the Faena Theater into the utterly opulent Le Hollandais Restaurant, whose new owner, Albert Spica (aka the Thief) is about to pay a visit with his chic, much-abused wife Georgina in tow. Spica’s “goons” and the actor-singer-dancers who play the restaurant’s uniformed staff circulate before their boss arrives, advising diners that Spica is a very private guy, so no photos or filming, or else.

And once he’s seated with Georgina and another couple at an elevated table – under a massive chandelier that lighting designer Grant Anderson often bathes in red – you understand the need for wariness in dealing with Spica.

Dublin native Brophy, a handsome actor whose credits include Manhattan’s immersive “Sleep No More,” Off-Broadway classics, TV and film (and who is a real-life Greenwich Village restaurateur), plays Spica as a cockney lout, loudly sharing details of his sexual history with the wife he calls “Georgie,” toggling between crude charm and rude abuse.

The whippet-thin Georgina, dressed in a white fascinator and revealing white dress over black lingerie (Anna Bingemann and MacLeod are both credited with costume design) keeps catching the eye of a guy seated alone next to the stage, a man seemingly absorbed in reading a book. Wearing glasses, his hair pulled back into a man bun, the Lover soon sheds his specs and his caution, taking Georgina into an onstage “restroom” behind a see-through curtain; the audience sees their encounters, though Brophy’s Spica must pretend he does not.

Georgina has an ally in the Cook (Thiana Berrick), gender-reversed from the movie so that the story’s gruesome finale comes across as self-empowered women giving an abusive monster his just desserts. Or a gag-inducing main course, if you will.

Structurally, Faena’s immersive experience is timed to intersperse interludes of dining and theatrical action. Musical director/pianist Paul Tine, playing with cellist Madalina Macovei and violinist Liubov Ohrimenco, guides seven talented young performers through a score of ’80s hits, songs that come across as pointed or ironic, given the context. Consider the titles. 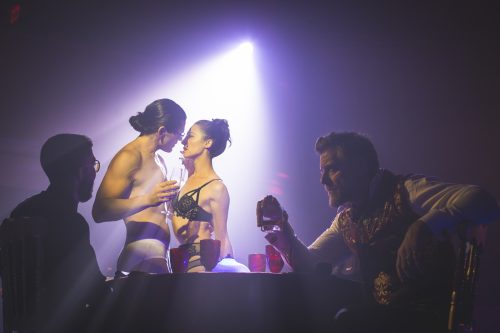 Parker Murphy and Kristin Guerin express their desire in “The Cook, The Thief, His Wife & Her Lover,” adapted by playwright Scott Gilmour from the 1989 Peter Greenaway film. (Photo courtesy of Faena Hotel Miami Beach)

Lily Ockwell, for example, sings “I Think We’re Alone Now,” then Amanda Lynn Williams adds Christine McVie’s “Everywhere” as a song for the roaming lovers. Bruno Faria performs Robert Palmer’s “Addicted to Love,” followed by Nate Promkul’s plaintive rendition of “Broken Wings.” Bianca DiSarro performs “(I Just) Died in Your Arms Tonight” and “Girls Just Wanna Have Fun.” Ori David Meyer and Evelyn Robaina join their castmates in singing and performing EJ Boyle’s movement and choreography. And after the bows, as you exit the theater, you hear a new title song written and recorded by Boy George.

Director Andrew Panton keeps the storytelling flowing with perfect precision. He does not, however, have a theatrically powerful script to work with. Gilmour’s script necessarily gives short shrift to the principals’ stories, and it jams the affair into brief scenes. The tale goes from passion to revenge served roasted in the blink of an eye. Actors Guerin and Murphy, who remain dressed in their underwear, are more reminiscent of dazzling Cirque du Soleil performers than actors playing characters engaged in a passionate doomed relationship.

“The Cook, The Thief, His Wife & Her Lover” is high-end theater (dining/show tickets are $230 and $280, with show-only tickets priced at $95), which the audience seems to enjoy immensely. The collaboration of international and Miami talent, plus the quality of Bernstein’s menu, turn what could have been a shocking evening into a palatable immersive experience for artistic adventurers.

What: “The Cook, The Thief, His Wife & Her Lover” by Scott Gilmour, based on the film by Peter Greenaway