Rene Lavan is a star of stage, screen … and now Zoom 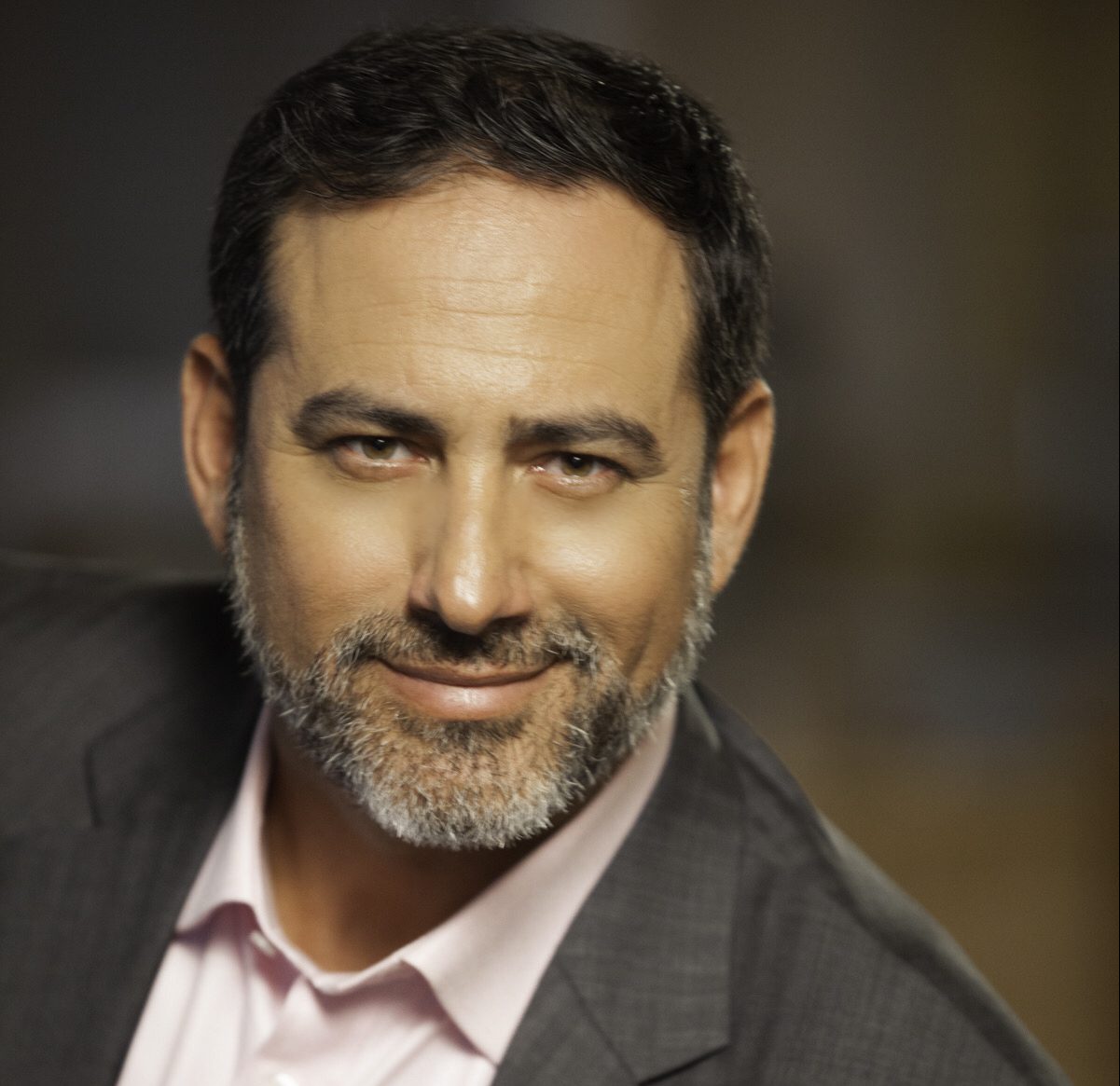 Actor Rene Lavan made his Broadway debut in late 2005 in “Latinologues.” (Photo courtesy of the artist)

Rene Lavan is an actor with range, charismatic sensitivity and the kind of evolutionary ability that buoys a long career.

The likelihood of achieving crossover success in such a glamorous world would probably have seemed unfathomable at the most dramatic moment of his young life in 1980. That’s when 11-year-old Rene Lavandera, his parents and younger brother Rey left Cuba for a new life in Miami during the Mariel boatlift.

Born in 1968 in Artemisa, southwest of Havana, Lavan spent each Sunday through Friday during his Cuban childhood at a school where ideological lessons, working the fields and military training constituted the curriculum. But on one memorable day, his parents tricked him into leaving school by saying his grandmother was in the hospital.

“They took a cab to the place you had to be to take the boat, and you had to be very discreet,” Lavan remembers, his voice growing thick with emotion. “The cab drove in front of my grandmother’s house. My dad was crying because he couldn’t say goodbye.”

Though Lavan spoke not a word of English when his family arrived in Miami, he worked hard to learn the language and lose his accent, becoming an on-air radio talent at Power 96 (WPOW-FM) by the late ’80s.

“I submerged myself in Miami’s English-speaking culture,” says Lavan, who discovered his passion for acting thanks to Miami Senior High drama teacher Marty Hancock, still a friend today. He transitioned into the innovative high school-college Performing and Visual Arts Center (PAVAC) magnet program, then graduated from Miami’s New World School of the Arts in 1988. 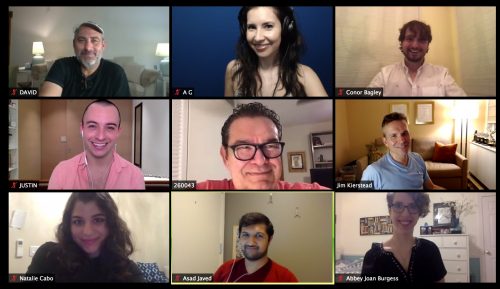 Although Lavan’s work in theater has been less frequent, he made his Broadway debut in late 2005 in “Latinologues.” During the long Miami run of Vanessa Garcia’s hit immersive play, “The Amparo Experience,” in 2019, he stepped into the roles of both Havana Club Rum scion Ramon Arechabala and Bacardi sales manager Juan Prado.

Now the actor is trying theater of a different sort. He’s starring alongside Tim Creavin in a recorded Zoom reading of “Borrowed,” the playwriting debut of Broadway producer Jim Kierstead. The play will begin streaming Oct. 22 on Broadway Virtual’s YouTube channel, with part of the $10 ticket price benefiting the nonprofit Humanity Project.

Plans are also in the works for a post-election “official” showing of “Borrowed” at Drive-In at the Fair, a movie-concert venue in a parking lot on the Miami-Dade Youth Fairgrounds.

Most recently, Fernandez, Kierstead, Gaviria and Bagley teamed up for the Broadway On Demand streamed reading of “Jenna and the Whale” by South Florida playwrights Garcia (“Amparo”) and Jake Cline. On Oct. 15, Fernandez and Kierstead were among the groups of producers who received 2020 Tony Award nominations – best play for Matthew Lopez’s two-part “The Inheritance,” and best revival for Terrence McNally’s “Frankie and Johnny in the Clair de Lune.”

“Borrowed” takes place in a bungalow on the New Jersey side of the Hudson River, near the George Washington Bridge. David (Lavan), a lonely older artist whose face bears the scars of cancer surgery, has connected with the younger Justin (Creavin) online, inviting him over with a sexual connection in mind. But things quickly go south, and after David refuses to let Justin leave, their encounter evolves into an intense evening of shared histories and, perhaps, the beginnings of healing.

Kierstead, the show’s multifaceted author, has a master’s degree in computer science, and another in clinical and counseling psychology. He got into producing theater 20 years ago and has had an increasingly active Broadway and regional career. His original impulse to try playwriting came after he saw a play on Broadway that he thought was just plain bad.

“I wrote ‘Borrowed’ on long flights to California and Chicago when I was producing ‘Kinky Boots,’” says Kierstead, who originally put the pseudonym “Jack Allen” on the script because he didn’t want those with whom he shared it to be reluctant to criticize it or influenced into producing it. “When people read it, they had two reactions. They asked, ‘This didn’t happen to you, did it?’ (It didn’t.) Or they thought it was so haunting.”

The character of David is a Vietnam veteran who married, raised a troubled son and later embraced his sexual orientation. Though the role wasn’t written specifically to be played by a Latino actor, Kierstead calls Lavan “really amazing.” 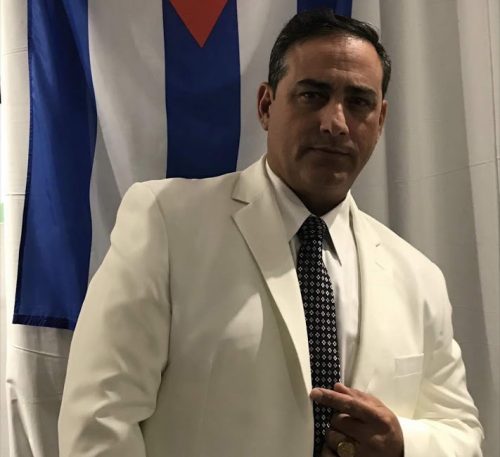 Rene Lavan played Bacardi salesman Juan Prado in “Amparo,” one of two roles he stepped into for the immersive hit. (Photo courtesy of the artist)

Fernandez, who along with Kierstead and Cabrera was a producer of “Amparo,” got to know Lavan when the actor joined the cast of the immersive show and suggested him for the role of David.

“René is a very naturalistic performer who can be both tender and frightening,” Fernandez says. “On film and in person, he comes across as very warm … He’s a subtle actor. He plays very well against Tim, who goes from calm to explosive.”

The New York-based Creavin pinpoints what his fellow actor brings to “Borrowed.”

“David is deeply hurt and tormented, and that comes out as rage, violence and abuse. It could be one note. You need someone you can empathize with, even though the character does awful things,” Creavin says. “René is compelling to watch … It’s hard to stay mad at him – he has an undeniable charm, which adds another layer and makes it a three-dimensional character. I would kill to see René in that role onstage.”

Gaviria, who will lead a “Borrowed” talkback at 8 p.m. Oct. 22, was moved by what Creavin and Lavan brought to their roles in the play’s filmlike reading.

“There’s a playfulness when you see Tim portraying Justin, because that’s how the character has learned to survive,” she says. “With René, especially when there are deep emotions involved, he just jumps right in. That’s gold right there. He’s a very open, warm, intelligent actor. In someone else’s hands, David wouldn’t be as appealing. You wouldn’t care as much.”

Although the “Borrowed” reading is among his newer projects, Lavan remains quite busy generating widely varied work for himself and others. And he has become quite the Zoom master.

The actor, who lives in Fort Lauderdale with wife Amanda and their 13-year-old identical twin sons, Luca and Julian, is a managing partner and cofounder of Elevado Entertainment, which he describes as “a boutique production company” he runs with friends Don Alan, Claudia Murray and Chad Steinberg.

“There are now so many avenues. Content is king. If you produce, you can’t be denied,” he says. 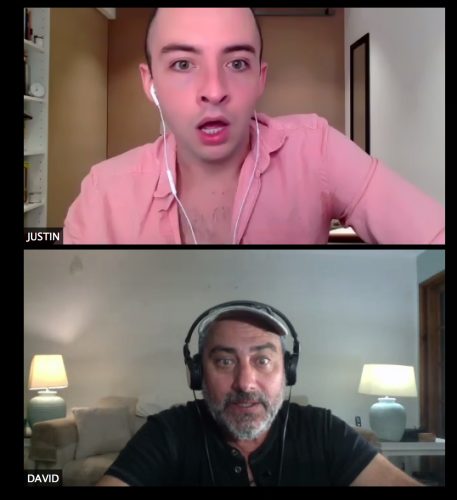 Tim Creavin (top) and Rene Lavan have a contentious relationship in the streamed reading of Jim Kirstead’s “Borrowed.” (Photo courtesy of Adriana Gaviria)

During the pandemic, Elevado has kept Lavan busy recording legal depositions via Zoom. But mainly, the partners intend to create work for themselves and the vast South Florida talent pool in front of and behind the camera. Lavan has been in both positions, with a list of producing, directing and hosting credits.

Plenty of Lavan’s varied work has been in mainstream entertainment, but he has also been a risk-taker, particularly when a project and his own history intersected, as with “Azucar Amarga.” In his breakout movie, he played Gustavo, a fervent supporter of Fidel Castro’s government until the experiences of his family and the woman he loves lead to his disillusionment, with tragic results.

“I was doing ‘One Life to Live’ when I got a call from Leon Ichaso about making a movie set in Cuba … When I read the script, it was in English, and it was so powerful – I thought, ‘I need to do this,’” says Lavan.

Ultimately shot in Spanish and in gritty black-and-white, the movie was made in just over a week with locations in the Dominican Republic and New York. On set, Levan discovered that among the props were history books brought from Cuba. They brought back memories of his pre-Mariel boyhood.

“It’s one thing to feel you were betrayed,” he says. “It’s another to have the evidence.”

Lavan hasn’t been back to Cuba since he and his family left in 1980. But last year’s “Amparo,” his first experience with immersive theater, became a kind of emotional passport connecting past and present.

“To see a grandson walk his grandparents through ‘the revolution,’ it bridged the generations. You saw what it was like to lose your freedom like that. The story was magic, beautiful … And that final monologue, in the middle of the audience, was like a hybrid of film and theater,” he says. “I read it. I lived it. It was in my skin. Every night was such a soul-cleansing experience. In doing all those shows, I must have cried 5,000 gallons of tears.”

WHAT: “Borrowed,” a virtual reading of a play by Jim Kierstead

COST: $10; part of the proceeds will benefit The Humanity Project.

MORE INFORMATION: Producer Adriana Gaviria will host a talkback with producer William Fernandez, playwright Jim Kierstead, director Conor Bagley and actors Rene Lavan and Tim Creavin at 8 p.m. Oct. 22. If you buy a ticket for the Oct. 22 reading, you can access both the show and the talkback. Get information and tickets at 3feo.com.