Review: Racism’s tragic cost portrayed in M Ensemble’s ‘Meet Me at the Oak’ 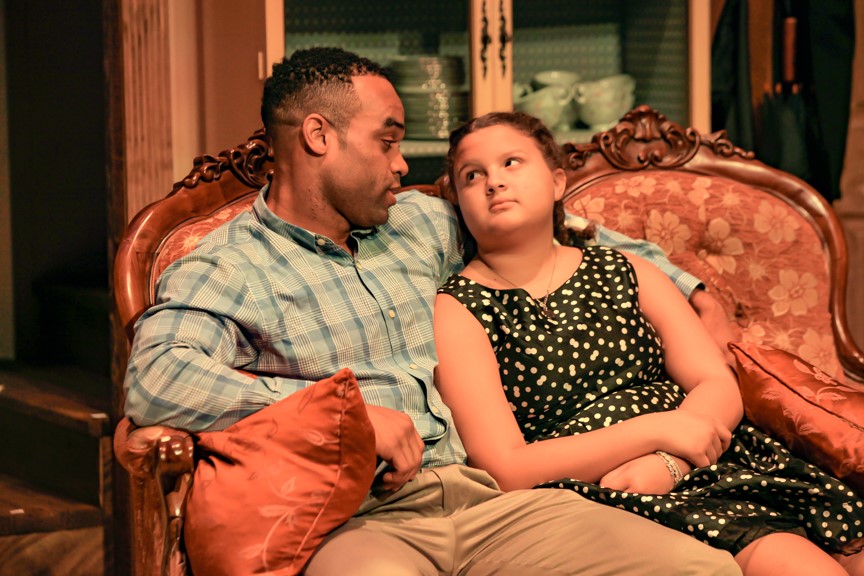 During Black History Month each February, powerful and fraught stories of the African-American experience take center stage. Later this month, for example, Fort Lauderdale’s New City Players will open its production of Lorraine Hansberry’s groundbreaking and timeless “A Raisin in the Sun,” while Main Street Players in Miami Lakes offers a look at contemporary injustice with David Mamet’s “Race.”

But for Miami’s award-winning M Ensemble, the region’s oldest professional theater company, telling these stories has been its mission for 48 years. Two years ago, the company chose to inaugurate its new home at the Sandrell Rivers Theater with a production of “Kings of Harlem,” written and directed by Layon Gray. That dazzling production of the play about the New York Rennaisance, a professional black basketball team founded before the Harlem Globetrotters, paid off in a big way for the company, winning the Carbonell Awards for best production of a play, best director, best supporting actor and best ensemble.

Now, M Ensemble is offering another play written and directed by Gray, “Meet Me at the Oak.” Filled with family warmth, history, humor and tragedy, this 2003 play is grounded in Gray’s memories of growing up in small-town Alexandria, La., and in a family story his father shared. Although it doesn’t quite achieve the seamless polish of “Kings of Harlem,” the drama is riveting and devastating as it personalizes the tragic cost of racism.

Gray’s tale is set in Alexandria during the rainy season in March 1955. The action takes place in the tidy home of Jonius Richard Sr. (Allan Louis) and his wife, Selma (Brandiss Seward), a vibrant and loving couple raising their 12-year-old granddaughter, Ruthie (Lily Grace), while their widower son, Junior (Scott Wesley), is off at a Northern college earning his degree.

Outside is a massive oak tree symbolizing the family’s history. As Billie Holiday’s “Strange Fruit” plays, that history is crystal clear, even before Jonius shares the chilling story of his great-grandparents Ben and Nelly, slaves who were lynched from those branches.

They were not the last to die that way, and the tree has become a living memorial to the Richard ancestors, a place to pray and mourn and remember. It is as meaningful to them as the intricately carved piano is to Berniece, fiercely protective of her family’s legacy, in August Wilson’s “The Piano Lesson.”

Selma meets Mary, a nurse, and invites the family to supper. But when out-of-work Frank and his dangerously racist cousin, Lou (J.J. Abujasen), appear, it becomes clear that communing over a meal won’t be in the cards. And after a horrible accident involving Katie, the families’ conflict escalates.

Although key plot developments are easy to spot before they occur, that doesn’t make them any less devastating. When a gun appears, you know someone, at some point, is going to get shot. When an overturned tub and a rope are lying by the white picket fence, you fear the tree will claim another victim.

Most of the performances in “Meet Me at the Oak” are powerful and engaging, led by the anchoring work of Louis as Jonius. The handsome, Miami-raised, Chicago-trained actor with the rich national résumé, an artist who was so memorable as the coach in “Kings of Harlem,” knows how to keep an audience spellbound.

Seward’s nurturing Selma is the quintessence of the loving wife, mother and grandmother, while Wesley’s Junior is moving as a young man who has known loss but is striving to make a life for himself and his daughter. The expressive Lily Grace turns in a performance that is quirky and endearing, and it’s no stretch to imagine that her inquisitive Ruthie is the kind of girl who might pal around with Scout from “To Kill a Mockingbird.”

The outsider Beaudoins — the men, anyway — supply the seismic conflict, with Abujasen’s vile J.J. the clear villain of the piece and Kaiser’s Frank a damaged man granted a chance to evolve by playwright Gray. Hall’s Mary is empathetic but too restrained, and just after Katie’s accident, the interactions of both families don’t fully ring true. Martinez’s talkative Katie is a tiny dynamo, but like some child actors, she speaks too quickly, too softly and doesn’t always enunciate clearly. Yet she and Lily Grace share an undeniable, adorable chemistry.

M Ensemble’s design team — set designer Mitchell Ost, scenic designers Miram Sierra and Jessica Diaz, scenic artist Rachel Finley, lighting designer Eric Nelson, costume designer Shirley Richardson and props designer Patricia E. Williams — together create a world that suggests both a small-town haven and its violent legacy. Although a pivotal moment near the end of the play is diminished by Gray’s decision to have some of the actors move in silent slow motion — there’s a reason, but the effect is awkward — the designers vividly transform the tree into a haunting yet sacred place.

As it moves toward the half-century mark, M Ensemble has established its own artistic legacy, presenting August Wilson’s towering body of work as well as other classic and contemporary plays with black characters and themes. The company continues to grow — in its ambition and the quality of its work — and with “Meet Me at the Oak,” it offers entry into a world rife with love and loss, hate and hope, a world that continues to resonate all too urgently.

Scott Wesley and Lily Grace have a father-daughter bonding moment in M Ensemble’s “Meet Me at the Oak.” Photo courtesy Deborah Gray Mitchell.