“Queen of Basel” and the Next Evolution of Compassion, Empathy and Forgiveness 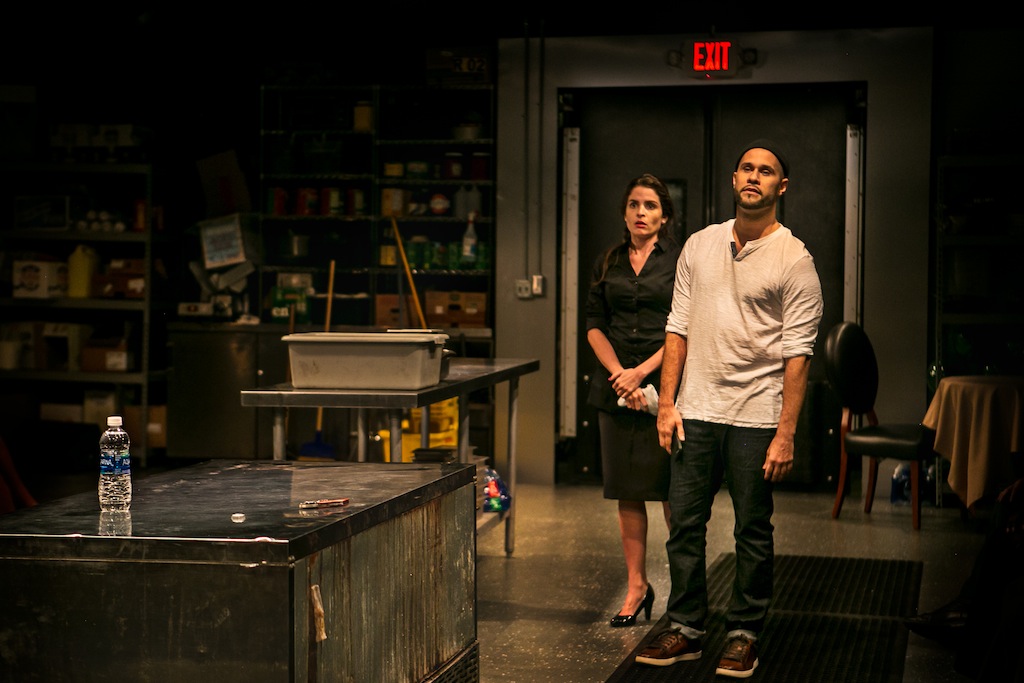 Hausmann pitched an idea to the Juilliard-trained playwright, whose Pulitzer Prize-winning former teacher Marsha Norman interviewed Bettis in the February issue of American Theatre Magazine about “The Ghosts of Lote Bravo,” a chilling play about the deadly violence permeating the lives of poor women in Mexico’s Ciudad Juarez.

“I had done an exciting grad school exercise with August Strindberg’s ‘Miss Julie,’ imagining what would happen if [the play’s servants] Jean and Christine spoke one language together, then another with Miss Julie,” Hausmann says.

“But I also felt the big problem with the play is its inherent misogyny. So I approached Hilary, who is a bad-ass feminist and a genius writer with a strong point of view about adapting it. She told me, ‘I hate that play.’”

Bettis, who was nominated with her fellow writers for a 2018 Writers Guild of America Award for their work on FX’s “The Americans,” then had second thoughts.

“I had been toying with the idea of adapting a classic,” Bettis says by phone from Brooklyn, where she lives with her soon-to-be husband, actor Bobby Moreno. “In every new thing I do, I want to try a different style, tone, genre. I get bored easily.”

So she accepted Miami New Drama’s commission to write a contemporary, set-in-Miami version of Strindberg’s 1888 play. After two years of writing and developmental work, Bettis’ “Queen of Basel” will preview at Miami Beach’s Colony Theatre April 12-13, then open April 14 for a run through May 6.

Bettis, who has subtitled her script “an unapologetic response to Strindberg’s ‘Miss Julie,’” admits to a love/hate relationship with the original.

“It’s so much a part of our western canon of plays and writers, but it’s so incredibly steeped in misogyny,” she says. “I thought you could take the structure and story points without being didactic with it. Strindberg wrote about social Darwinism and survival of the fittest, that ultimately class and aristocracy can’t compete with the laws of nature.”

Then Bettis asks, “So what does survival mean in 2018? Maybe the next evolution for humans is learning to have compassion, empathy and forgiveness.”

Julie (Betsy Graver), the socialite daughter of the hotel’s real estate developer owner, encounters Christine (Daniela Bascope), a cocktail waitress who has recently escaped the violence and dire shortages in Venezuela. When Julie’s [unseen] father asks Christine to get his agitated daughter home to her place in Coconut Grove, she summons her boyfriend John (Rudi Goblen), a first-generation Cuban-American Uber driver full of big talk and bigger dreams.

To help draw the audience into the play’s intense, volatile world, director Hausmann isn’t using the Colony’s regular theater seating. Instead, approximately 100 theatergoers will sit onstage at each performance, surrounding the actors like voyeurs as the performers tell a story that is likely to resonate powerfully in multicultural South Florida.

Though the play is in English, John and Christine sometimes speak to each other in Spanish, and because of the stage configuration, there’s no simultaneous translation. But Hausmann is confident that even those who don’t speak Spanish will get the meaning of what’s being said.

Graver, who studied “Miss Julie” when she was a student at Miami’s New World School of the Arts, has always wanted to play the title character, though she acknowledges that some classical pieces aren’t always accessible to broad contemporary audiences.

“All three characters are way more intelligent and have many more layers than they do in Strindberg’s play,” Graver says. “It’s nice to play an intelligent woman who fights to keep her dignity, even though she gets torn apart at the end…She is kind of dying inside, but she’s fighting it and not surrendering to it.”

Goblen, a well-known writer-dancer-choreographer as well as an actor, had never seen nor read “Miss Julie” when he was cast. He tried but found it hard to relate to Strindberg’s world.  Bettis’ script, though, spoke to him.

“I’m from Miami, so I instantly connected with the character,” Goblen says. “I know John. He’s my Uber driver. I went to middle school and high school with him. I worked at Doral with him.”

Bascope, an American-born actress who grew up in Venezuela and now lives in Mexico, is one of the stars of Telemundo’s immigration telenovela “Al otro lado del muro” (“The Other Side of the Wall”).  She left Venezuela three years ago but still has family she visits there, and she believes Bettis strongly conveys the current realities of that country.

“I’ve seen movie versions of ‘Miss Julie,’ but I’m feeling really grateful for this,” Bascope says.  “You see the Venezuelan situation through my character, and I feel deeply connected to that. Every time I say these words, I feel that connection. I’m this vessel.”

The actors also feel that Bettis, who made repeated trips to Miami to research the world of “Queen of Basel,” captures the region’s shiny surface and grittier reality.

“It’s interesting that the play happens in the midst of Art Basel, this big spectacle, and there’s so much happening behind the scenes,” Goblen says. “People think Miami is one big resort, one big beach, this beautiful touristy shiny sexy place where you go to live out your dreams. That’s the brochure that’s handed to the rest of the world.”

In “Queen of Basel,” Hausmann says, “Hilary has captured the essence of humanity. She presents three different, profoundly human experiences we can relate to.”

Even before the play opens, “Queen of Basel” is stirring interest from other theaters. Washington D.C.’s Studio Theater has already announced it will do the play next season, and Bettis’ agent has told her she’s “getting requests left and right” for the play.

Bettis, who was born in South Carolina, was the eldest child and only girl in a family that moved often. In her early life, living in what she calls a “hyper-masculine” culture, she knew violence, sexual assault and, briefly, homelessness.  Though she’s now an acclaimed playwright and screenwriter who has received multiple fellowships and residencies, though her work is being produced all over the country, though she has two television series in development, Bettis understands both sides of the world depicted in “Queen of Basel.”

“Miami is in some ways the epitome of the United States.  It’s a city of such extremes. It’s like America on steroids,” she says.