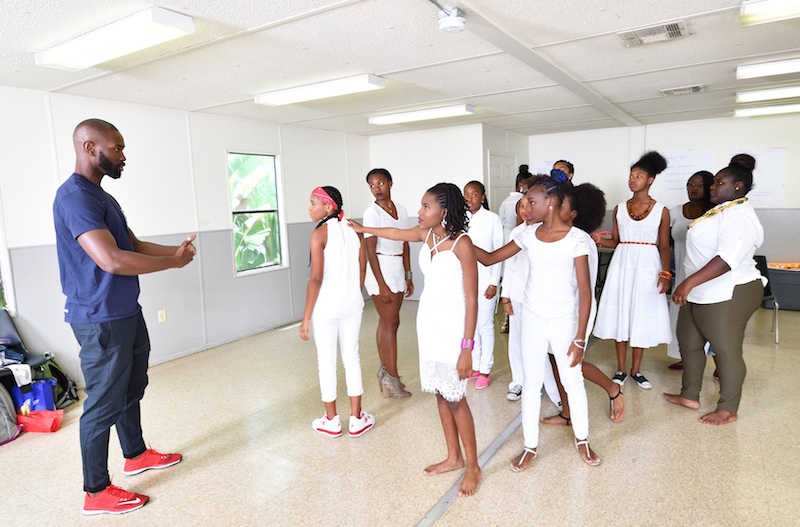 Inside a nondescript cream-colored trailer on the grounds of the African Heritage Cultural Arts Center in Liberty City, 13 aspiring Miami artists have been devoting themselves to a transformative summer.

Ranging in age from 13 to 17, the participants are all female, all young women of color with a passion for the arts. For 13 weeks, they have sacrificed family vacations and jobs in order to spend every Monday through Friday from 10:30 a.m. to 5:30 p.m. in an intensive, conservatory-style pilot effort known as the Youth Artist Leadership Summer (YALS) Program.

Their teacher and mentor, the man who felt moved to create a program that could prepare and inspire the next generation of women artists and arts leaders, is award-winning Miami playwright Tarell Alvin McCraney.

McCraney, a winner of the MacArthur “genius grant” fellowship, is a Yale School of Drama graduate whose works – including his Brother/Sister trilogy, Choir Boy and Head of Passes – have been produced to great acclaim all over the United States and in England. Now 35, he’s working as a professor of theater and civic engagement at the University of Miami while juggling multiple deadlines for television projects and new plays.

He is, indisputably, a world-class artist. But McCraney is also no stranger to Liberty City or the African Heritage Cultural Arts Center. He grew up nearby, and as a bullied gay youth, found refuge and a path to his future at the center.

“You could tell there was something sizzling inside him,” says Marshall Davis, the center’s veteran director, who has known McCraney for more than two decades. “He’s had challenges, but his interests have taken him so far.”

Artistic and sociopolitical issues factored into McCraney’s thinking when he dreamed up the YALS program. Against the backdrop of the Black Lives Matter movement – a movement begun by women, the playwright notes – he wanted to bring young black women into an artistically nurturing space.

“I kept seeing these programs for young men everywhere, young men of color in particular. Nobody was protecting or thinking about young women, and why don’t they have access to institutional power and rights?” he says. “It kept coming back to my head that yes, black men are being targeted by police and racist vigilantes, but nobody’s talking about how this is affecting black women, who make less than black men, who can’t stand on the corner of NW 62nd Avenue and NW 22nd Street and wait for a bus without getting harassed.

“I do know that, as much as they’re getting that treatment, we need to be giving them the equal opposite. They’re getting this extremity outside, and then we expect them to flourish somehow, like why don’t you pull yourself up by your bootstraps? So for me, it was about trying to give them that same force, that same opportunity.”

McCraney forged a partnership with the not-for-profit organizations Arts for Learning and Voices United, the University of Miami, the African Heritage Cultural Arts Center and the Miami-Dade County Department of Cultural Affairs. He got a $25,000 grant from the Doris Duke Performing Artist Awards Program, and with funds and in-kind donations from UM and the county, he and Arts for Learning developed a $135,000 first-year budget for the program.

YALS is designed as a free three-year experience for each group of participants, with a new cohort of students added each summer. In the first year, the teens have worked with McCraney to write their own adaptation of Sophocles’ Antigone, translated and interpreted by Irish Nobel laureate Seamus Heaney as The Burial at Thebes, now further transformed by McCraney and the students. Next summer, the participants will write one-person shows. In the third year, they’ll create full-length plays.

From his connections with artists in Miami and elsewhere, McCraney has brought in a powerhouse team to work with the students. Choreographer Hattie Mae Williams taught them dance, Latrice Bruno voice, Loni Johnson visual arts, and Voices United founder Katie Christie worked with them on leadership skills.

To direct what he’s calling YALS Antigone, McCraney called on TeaAlagić, who staged the world premiere of his play The Brothers Size at New York’s Public Theater. Born in Bosnia and Herzegovina, she fled her war-torn country at 20, working as an actor and director with avant-garde theater greats in Europe and the United States. One of her roles back in the day in Czechoslovakia? Antigone.

“This is an original adaptation, which Tarell and the students are writing together. We’re still getting new pages, because that’s the way new plays are developed,” she says. “These young women can identify very much with Antigone. She speaks the truth. She’s honest.”

Working with the director, says participant Brigitte Boisson, is “interesting. You’re exposed to what a real rehearsal would be like in the real world. It’s not easy – write everything down!”

McCraney believes that working with a woman who fled war and oppression has given the teens insight into more than artistic technique.

“They thought that women being treated badly was a thing here,” he says. “Now they realize it’s global.”

In this all-female version of the play, which will have free work-in-progress workshop showings Aug. 18-19, Antigone defies the edict of her royal aunt Creona to bury her slain brother Polyneices, a traitor in Creona’s eyes. The consequences are fatal, though Sophocles, Heaney, McCraney and the students get to the play’s sorrow-filled ending in an escalating series of tragic turns.

“The story of Antigone is very relevant in light of the recent Black Lives Matter movement and police brutality, because it speaks about injustice and inequality in our legal system,” says student Amaya Howard.

The language in the YALS adaptation is a blend of the classic and the contemporary. There is talk of ending misogyny, homophobia, body shaming; of people of color being targeted. The freedom song Turn Me Around and other a capella music arranged by the teens are incorporated, as is prayer that would sound familiar in a neighborhood church.

Of McCraney, Morrow says, “He’s a teacher, a mentor and a role model. He’s amazing at what he does. It’s comforting that someone like him takes pride in making sure we’re all OK.”

“He is the most caring and passionate person I have ever met. He is someone who has had to get through many obstacles to get where he is, but he remains dedicated and humble,” she says. “I know it’s hard for us African-Americans in the world, but he has pushed through all of his disadvantages, still becoming successful and giving back to his community. He has inspired me in so many ways, teaching me nothing is impossible and beyond the sky is the limit.”

“For sure, learning to ‘listen intently’ will help me in school. The overall experience will help me in my career, because I want to be an actress, and Tarell treats us like professionals, like his colleagues,” says Cidel, who passed up the chance to teach at a musical theater camp to study with McCraney. “He’s not just a teacher. He’s a great friend. He’s hilarious. I aspire to be as sweet, professional and smart as he is.”

Betsy Mullins, the artist services director of Arts for Learning, has been observing throughout the summer and has seen “phenomenal evolution” in the participants, thanks to McCraney’s unified vision for the program and the work he and the other teacher-leaders have done with the teens.

“They’re showing the girls that you can come from where Tarell did and come out the other side an artistic powerhouse,” she says.

Arts for Learning executive director Sheila Womble believes that the YALS program is “distinctive in its intentionality, focus and size. It’s a small cohort of young women of color, going deep over three years…I’m hopeful that there will be very accomplished young women coming out of this program. Whether they stay in the arts or not, they’ll be well-prepared for the future.”

That’s McCraney’s dream, one born in part from the frustrations felt by women playwrights and directors of color, a group vastly under-represented in major American regional theaters and New York.

“I want to be at the table with the smartest, most brilliant and most diverse people. I want to tell the best stories. I want to have the best perspectives. I’m not happy with just my voice,” McCraney says. “What I can do is make a table and pull some chairs out. Not because I think anybody is less than or can’t do it themselves. I want to be a part of the conversation. The conversation isn’t full until everybody’s a part of it.”

He shares a story.

When he arrived at the center on a particular morning in July, the girls were already there, crying and praying, saying, “Please protect Mr. Tarell, because he’s a black man, and we don’t want anyone to hurt him.” Philando Castile had just been shot and killed by a police officer in Minnesota, and the teens had already seen the video on Facebook.

“Once I figured out why they were praying and crying and what they were scared about, I couldn’t say, ‘Don’t worry guys. I’m going to be OK.’ We don’t live in that kind of world. The odds are not in my favor,” he says. “I’m almost certain no one at Gulliver is sitting down having to pray for their lead teacher. It’s a world that, for some of us, it’s all we know. The brilliant hope is them.”