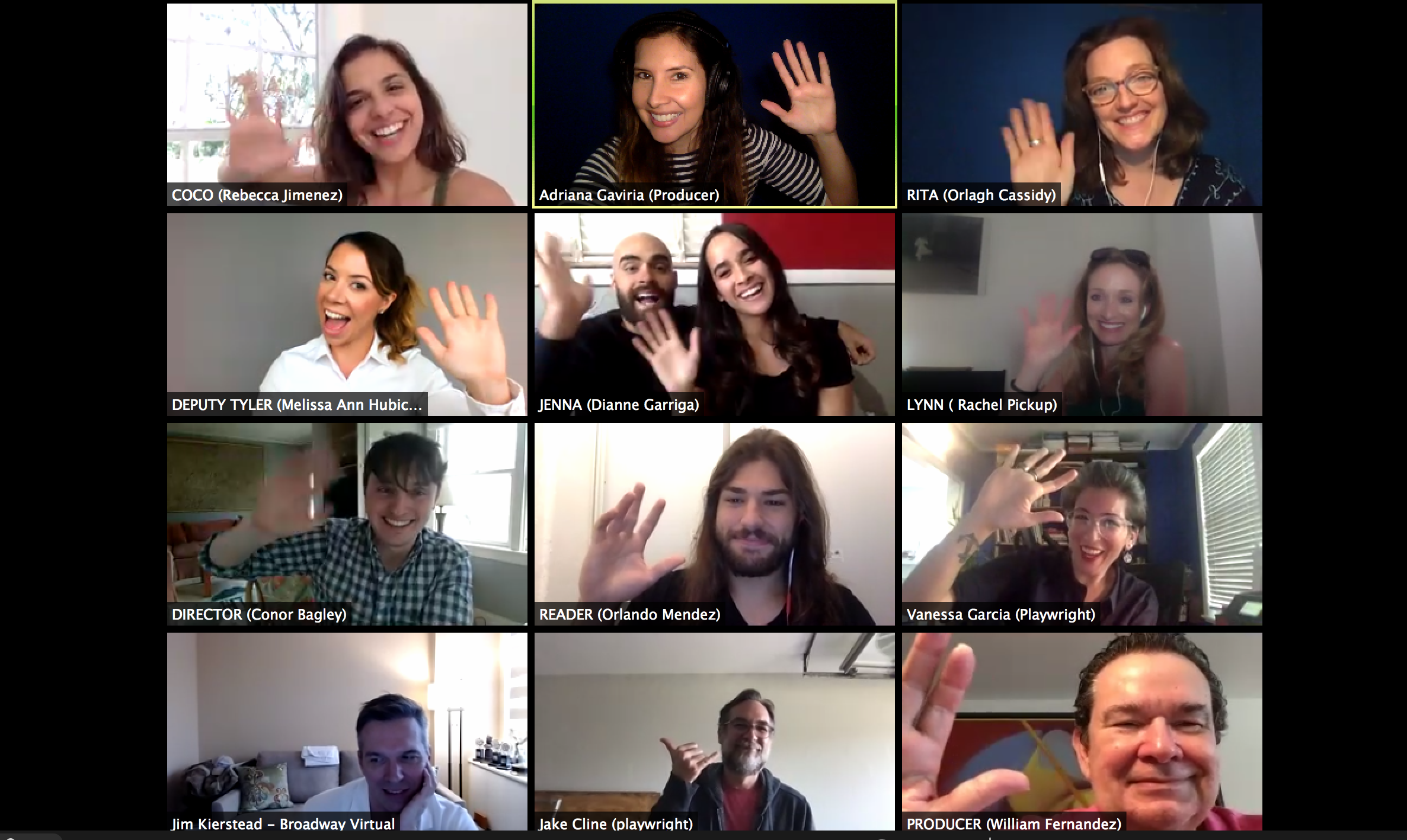 The “Jenna and the Whale” team give a wave upon wrapping up filming of the virtual reading, which will be available through Broadway On Demand on June 30. (Photo courtesy of Adriana Gaviria)

Musicals are typically the creation of composer-lyricist-book writer teams. On the other hand – although producing a play is a collaborative experience – dramas and comedies are nearly always the work of a solo playwright.

“Jenna and the Whale,” which will get a high-profile virtual reading on Broadway On Demand at 5:30 p.m. June 30, is that rare exception: It’s a piece created by a pair of playwrights, Vanessa Garcia and Jake Cline.

Garcia was the author behind the long-running, immersive Miami hit, “The Amparo Experience.” Cline was part of the South Florida Sun Sentinel team awarded the Pulitzer Prize for Public Service for its illuminating and ongoing coverage of the deadly shooting rampage at Parkland’s Marjory Stoneman Douglas High School. The two were paired creatively by William “Willie” Fernandez, the former Sun Sentinel managing editor who is now a New York producer and Zoetic Stage board member.

Fernandez, his Broadway United/Broadway Virtual producing partner, Jim Kierstead, and producer-director Conor Bagley were among the many Broadway producers of Matthew Lopez’s two-part “The Inheritance,” which won the 2020 Drama Desk Award for “Outstanding Play.”

All three are now involved with “Jenna and the Whale” – with Fernandez teaming up the playwrights, Kierstead making the deal with Broadway On Demand, and Bagley directing the virtual reading. Also producing is Adriana Gaviria, whose New York-based arts/theater initiatives North Star Projects and The Sol Project will benefit from the reading.

“Jenna and the Whale” mixes metaphor, realism, sorrow, humor and hope in a kind of dramatic fugue. It begins in the sloshing belly of a whale, a la the biblical story of Jonah and the whale. Surfer Jenna (Dianne Garriga) winds up there after going out on her board despite horrendous conditions. Inside the massive creature, she meets Jonah (Gabriel Bonilla), who breaks the news that he has been there for three years.

Memory is easily and quickly erased in that dank, dark environment. Still, Jonah soon reminds Jenna of someone – her boyfriend, Patrick, who was lost to the ocean three years earlier under mysterious circumstances. 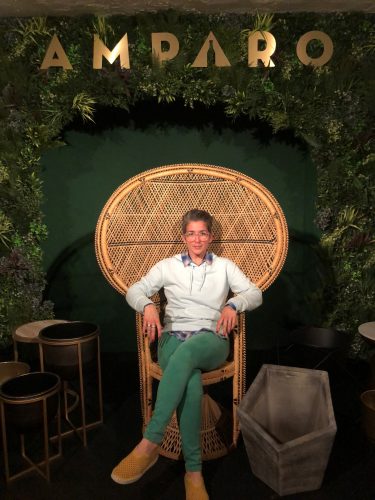 “Jenna and the Whale” co-author Vanessa Garcia at the opening night of her previous play, “The Amparo Experience.” (Photo courtesy of Vanessa Garcia)

From an earlier pre-pandemic staged reading at Miami New Drama on Miami Beach, the playwrights got a sense of elements that needed changing, which they did before work progressed on the virtual reading.

“We learned a lot, but we had way too little time,” Garcia says. “The play is a fugue, but you need time to work on it or the actors get stressed out.”

Having worked with Garcia on “Amparo” and with Cline at the Sun Sentinel (and on his still-evolving first play, “Purple Hearts”), Fernandez thought the playwrights would be professionally compatible.

“They have similar styles. They both have a gift for dialogue and heartfelt writing. And they’re both the nicest people – you meet them and fall in love with them,” he says.

Cline and Garcia hit it off creatively when they followed up on the producer’s suggestion and met for drinks and conversation in July 2019 at The Mighty, a Miami bar on Coral Way, where Cline’s book club gathers. They swapped stories about what they’re each juggling.

For Garcia, there’s a Ruben Rabasa solo show; a second novel; several screenplays; an adaptation of Carlos Eire’s “Waiting for Snow in Havana;” and the happy addition of a baby girl to her family.

For Cline, there are freelance pieces for The Atlantic and The Washington Post; a fellowship in the Playwright Development Program run by Miami-Dade County’s Department of Cultural Affairs; and ongoing work on plays, short stories and novellas. Cline was previously editor of ArtburstMiami.com and is now publications director at Miami’s Arsht Center for the Performing Arts.

“Jake talked about things he was working on, including two novellas and a play. He told me the stories of all of them, and in one there was a whale that got beached,” Garcia says. 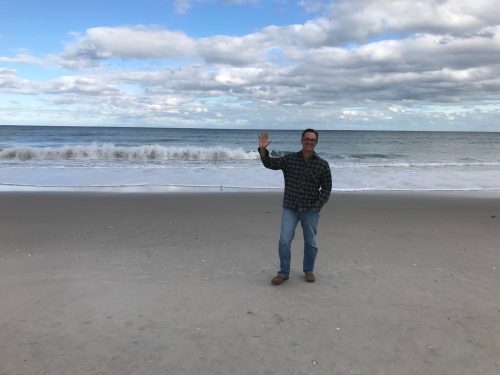 Playwright Jake Cline, co-author of “Jenna and the Whale,” is an avid surfer. (Photo courtesy of Ray Orozco)

“They were all set in Dunes Beach [a fictional Florida coastal town with good surfing], and the whale was the unifying factor,” Cline adds. “I’d been thinking about beachside towns. In my play, a man and a woman find themselves in the belly of a whale.”

Garcia sensed connections among the stories.

“As he talked, I saw them thread together. I wrote it all down and thought, ‘He’ll either hate it or we can work to make it one play,’” she says. “It started to grow. I could see it.”

Of their collaboration, Garcia observes, “You can tell if it will work right away.  Either it will flow, or it will fall apart. With Jake, it was flow, flow, flow.”

Cline put together a playlist for inspiration. The songs by varied groups and artists (The Velvet Underground, Florence and the Machine, Sharon Van Etten, Laura Marling and others) aren’t in the play, but they’re character-specific, and both playwrights listened to them while crafting the script.

“The entire time, I felt we were on the same wavelength,” says Cline, an avid surfer.

The recorded Zoom reading on June 30, which will benefit the nonprofit North Star Projects (using the arts live and virtually to build community) and The Sol Project (an initiative to produce the work of Latinx playwrights), has been staged and edited by Bagley. The 2016 Yale University grad already has a string of New York and regional credits as both a director and producer, and he directed several of the entries in the virtual Miami Monologues series for the Arsht Center’s Arsht@Home.

“When I first got ‘Jenna and the Whale,’ I couldn’t put it down,” Bagley says. “I thought it was one of the best new plays I’ve read. The two playwrights were writing in a unified voice … I was really drawn to the story of a girl struggling with grief and finding her way in a tough world.”

Of Garcia and Cline, Bagley says, “They’re very poetic writers with a supreme sense of beauty … The characters, five women and one man, all play such an integral role in the plot. Vanessa and Jake have a real great sense of both silly and dark humor, of levity and seriousness.”

Bagley likes the fact that the play doesn’t definitively answer what is and isn’t real, that it mixes imagination and reality.

Although he, like everyone else in theater, longs for a return to live performance, he thinks giving current theater fans and potential ones a virtual taste of new works is a good thing.

Producer Fernandez loves learning about scripts from staged readings, and he thinks the Zoom model has a future even after the pandemic ends.

“It’s a great tool,” he says of the medium’s potential for sparking future productions. “Not every producer is based in New York. You film it, and people all over the place can watch it.”

“We weren’t sure it would work on Zoom, but it does. I think it’s a really good way to get it out there,” Garcia says.

Cline adds that he’s happy that, four months into this altered existence, arts lovers have become so accustomed to watching performances and readings online.

And yet, says Garcia as she looks who-knows-how-far into the future, “I’ll be very excited to be in a live space again. Ooooh, it’s gonna be nice!”

What: “Jenna and the Whale” benefit reading; a discussion with the playwrights and director will follow the initial presentation of the reading. The play will remain on the platform for several days.

For tickets and more information: Northstarprojects.org