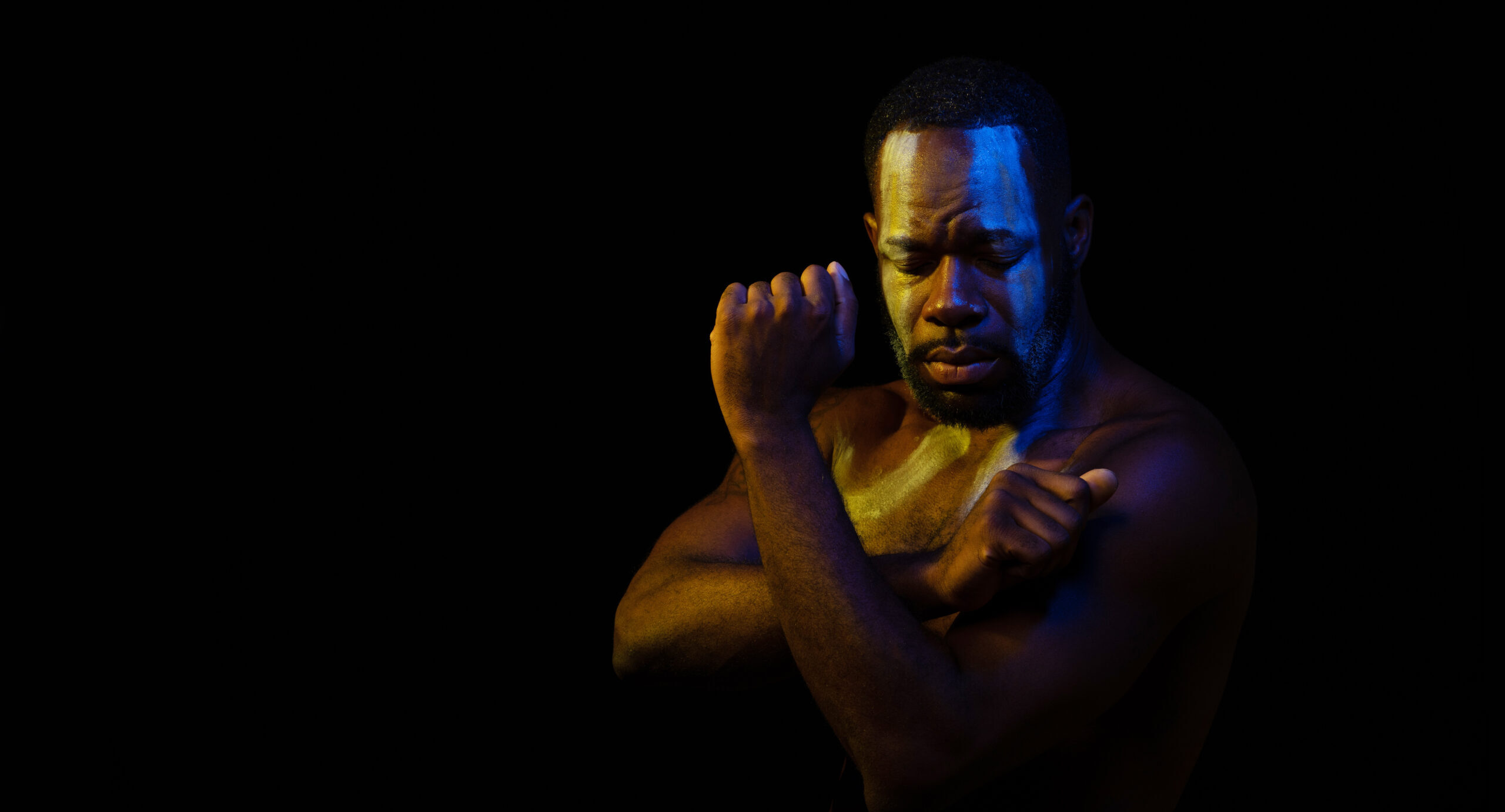 She has taken audiences along as she explored the life of a gifted black seamstress in “Intimate Apparel,” the horrific experiences of women in Congo in “Ruined,” racist Hollywood in “By the Way, Meet Vera Stark,” the fears and fury of steel workers in “Sweat,” the challenges of the formerly incarcerated in “Clyde’s,” and the complexities of superstar Michael Jackson in her book for the Broadway musical “MJ.”

That topical range, she says in a telephone interview while heading back to her home in Brooklyn’s Boerum Hill neighborhood, has to do with her particular creative nature.

“I’ve found I have a nomadic imagination and that I’m a restless artist,” says Nottage, who lives in her childhood home with her filmmaker husband Tony Gerber. “That’s foundational to my practice.” 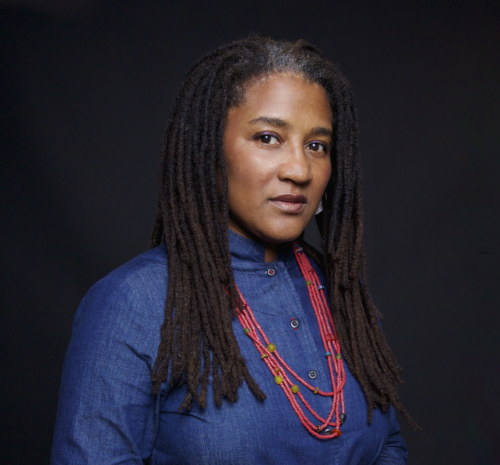 Each piece in her large body of work is quite different, meticulously researched, comic or tragic or both.  Nottage is the only woman to have won the Pulitzer Prize for Drama twice – for “Ruined” in 2009 and “Sweat” in 2017 – and in 2007 she received a MacArthur Fellowship, unofficially known as the “Genius Grant.”

The reach and impact of Nottage’s work are vast.

The Theatre Communications Group, which tabulates the most-produced plays and playwrights for the coming season at its 551 member theaters, recently announced that Nottage tops both lists. “Clyde’s” will get 11 productions (“Sweat” will have seven), and Nottage will have 24 productions of various plays around the country (a tie with Lauren Gunderson).

“The magnitude and muscle of Lynn Nottage are pretty fantastic,” says Zoetic Stage artistic director Stuart Meltzer, who is beginning the company’s season with the Florida premiere of Nottage’s “Mlima’s Tale.” “So is the way she gives voice to the voiceless.”

Different in content and style, “Mlima’s Tale” previews Oct. 13, opens Oct. 14 and runs through Oct. 30 in the Carnival Studio Theatre at Miami’s Arsht Center. The harrowing and deeply emotional story tracks the illegal trade in elephant ivory from the African savannah to the opulent home of a nouveau riche Asian couple.

Meltzer read the script of the 2018 play two years ago and fell in love with its style, story and power. Nottage structures scenes much as Arthur Schnitzler did in 1897’s “La Ronde,” with two characters interacting, then one moving on to the next scene to engage with a different character, who then moves on to the following scene – and on and on it goes.

The only omnipresent force is Mlima, whose name means “mountain” in Swahili. The magnificent African “long tusker” (so named because his enormous tusks nearly scrape the ground) meets his earthly end not long after the play begins. But his spirit follows the journey of his poached tusks, and with a quick touch, he marks each person involved as complicit. 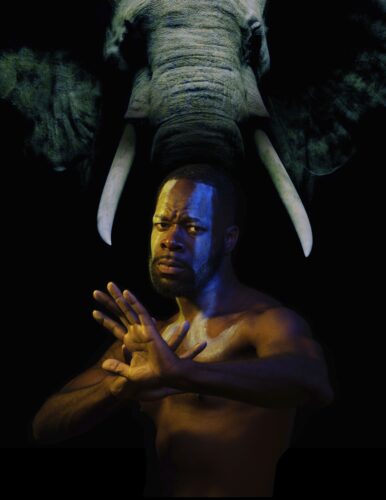 In notes at the beginning of the script, Nottage suggests a sparseness and fluidity in the staging, the use of a live musician, projections and media to summon different places – and a “breathless quality to the flow of the action” with no total blackouts until the end of the play.

“Ms. Nottage says to find what ‘works for you’ in this play. I’m always looking for material that lets us explore how creative we can be. She gives us this wonderland and lets us decide how to tell it,” says Meltzer, who is collaborating with choreographer Herman Payne on the production’s movement direction. “We can be inventive in the staging, sparse at times as we bring light out of darkness and sounds out of silence.”

Nottage was commissioned to write “Mlima’s Tale” by Kathryn Bigelow, the Oscar-winning director of “The Hurt Locker” and “Zero Dark Thirty.” An activist in the fight to save African elephants – whose numbers have plummeted from 10 million in 1900 to 415,000 today, despite a 1990 ivory trade ban – Bigelow made the 2014 short film “Last Days” to argue that the slaughter of majestic elephants for their ivory was not only hastening the extinction of a keystone species but also funding African terrorist groups.

The playwright, who was once charged by an elephant on one of her trips to Africa, spent a year doing the research that underpins “Mlima’s Tale.” The key character was inspired by Satao, a Kenyan big tusker who was around 45 when poachers killed him with a poisoned arrow in 2014. But after all the research, bringing Mlima and his thoughts to life flowed from the deep wells of Nottage’s imagination.

For example: Nottage encapsulates Mlima’s nature and history in a vividly evocative two-page monologue at the start of the play.  He relates his grandmother’s advice about the key aspect of survival in this chilling phrase: “…how you listen can mean the difference between life and death.”

By sharing Mlima’s story as a 90-minute play, Nottage says, “it’s easier to build empathy in the room.  In telling the story of ivory traffickers, with so many characters, you have to have a strategy that will allow people to feel the depth and breadth of it.”

Hence the “La Ronde” structure and the decision to have three of the play’s four actors portray 19 different characters.

In the Zoetic production, Paul Torres Wong, Phillip Andrew Santiago and Sydney Presendieu must transform from scene to scene, playing a variety of African, Chinese, Vietnamese and American characters.  Dialect coach Rebecca Covey has been key to those transformations, but Torres Wong observes that much of the magic lies in Nottage’s writing.

“Each character is a fully realized, multidimensional human being,” he says. “She has made it stereotype-proof.

Mlima is played by Jerel Brown, an actor, singer, dancer and choreographer who appeared in Nottage’s shattering “Ruined” at GableStage in 2012 and received a Carbonell Award nomination for his work in Slow Burn Theatre Company’s intense “Parade” in 2014.  He is receiving a Silver Palm Award and just got another Carbonell nomination for his choreography of Slow Burn’s “Once on this Island.” Tall, muscular, graceful yet powerful as he moves around a stage, Brown is best known in South Florida as a dancer, a lynchpin of any ensemble.

“I hope this will show what I can do,” says the smiling, soft-spoken actor.  “I don’t like being pigeonholed as a dancer. I started as a singer, then became an actor, then a dancer.  Maybe I keep getting cast that way because there’s a lack of male dancers in South Florida.” 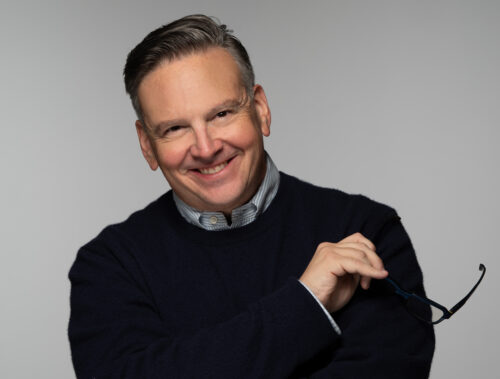 Brown did his own research as he prepared for the role, reading about African elephants, looking at videos to observe their movement and reactions, watching numerous interviews with Nottage.

“Elephants celebrate when there’s a birth. When there’s a death, they mourn,” Brown says. “I play three Mlimas: the animal, the physical tusks and Mlima’s spirit…I’m the only actor onstage for the entire journey. I see the journey, and throughout it, I want each person to do the right thing.”

But from the play’s impoverished African poachers to its wealthy Chinese collectors, virtue is in short supply. Thus, Mlima leaves a mark on each one, a swipe of paint indicating complicity.

“The paint indicates an element of guilt. Everyone has blood on their hands,” says Santiago, whose Zoetic debut is also his first time appearing in a Nottage play. “It’s great to see a piece about conservation. Lynn Nottage’s work takes a big, big issue and puts it under a microscope.”

Torres Wong, who is of Chinese and Cuban descent, plays three distinct Chinese characters, two Kenyans, a Vietnamese woman and an American in “Mlima’s Tale.”  He touches on just one of the play’s complexities when he observes, “The craft and art of ivory carving is meaningful in Chinese culture.  But it’s tough to reconcile the atrocity of the ivory trade with this ancient tradition.” 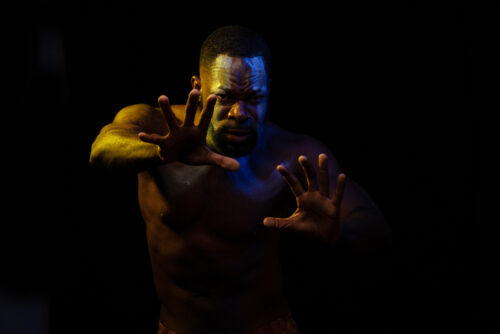 As the elephant Mlima, actor Jerel Brown leaves a mark on those who have contributed to his fate in “Mlima’s Tale.” (Photo courtesy of Chris Headshots)

Presendieu, who graduated from Miami’s New World School of the Arts in 2020, is making her professional debut in a play that feels to her like the telling of an African folk tale.

Of Brown, whose Mlima is invisible to the other characters, she says, “He has a great presence.  I can feel where he is onstage.  He uses his body, his energy and his eyes to communicate, like a dance.  It adds an eerie element.”

The forward progress of the glowingly reviewed “Mlima’s Tale” took a long pause during the pandemic, and Nottage says she had been optimistic about the play getting more productions, in part because “we’re not being good stewards of our fellow creatures.”

At one point not so long ago, Nottage was working simultaneously on “MJ” and “Clyde’s” for Broadway and the operatic version of “Intimate Apparel” at Lincoln Center.  She survived, she says, by learning to compartmentalize, being fully present in each rehearsal room and turning to her pandemic-acquired skills of yoga and meditation when she got home.

Multiple projects lie ahead, including adapting “Clyde’s” into a television series.  Nottage, who will turn 58 next month, says she is still happily focused on creating: “I’ve been so busy for so long that I haven’t had time to think about legacy or dream projects.”

WHAT: “Mlima’s Tale” by Lynn Nottage