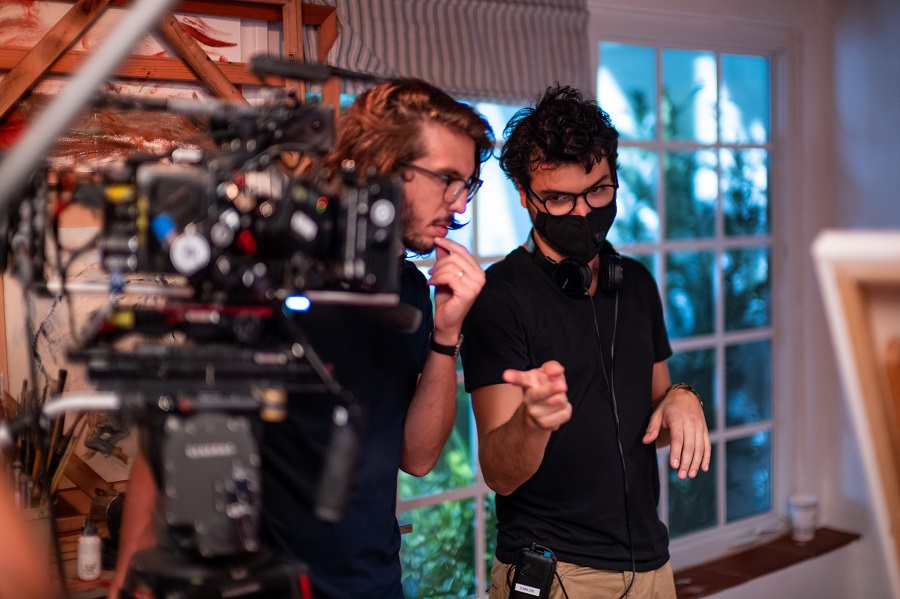 Movie lighting shines bright outside a home in the Normandy Isles neighborhood of Miami Beach. It’s around dusk in August, and passersby in cars slow down to catch a glimpse of what’s going on behind the spotlights.

Inside, a chef sets the table for a dinner scene, while an actor gets prepped in a room-turned-makeup-and-costume-area. The home’s original furniture has been moved into a corner to make way for original artwork that will be an integral part of the movie’s plot, as well as other set pieces. Camera equipment is everywhere.

The film is “Borrowed,” a psychological thriller based on a play by Jim Kierstead that was presented as a streamed Zoom reading during the COVID-19 pandemic. The plot concerns a lonely older artist named David who connects online with a younger man, Justin. The latter agrees to meet David at his bungalow, with the implication of a sexual encounter. But after Justin arrives and decides not to move forward, the story takes dark twists and turns.

The play found ties in Miami and became a film made in South Florida with a Latin flair — produced by Broadway United’s Kierstead and William Fernandez, who joined forces with El Central Productions, which is helmed by filmmakers Carlos Rafael Betancourt and Oscar Ernesto Ortega. Between the four of them, they represent Miami Beach, New York City and Los Angeles.

Kierstead and Fernandez have had a string of Broadway successes as producers, most recently receiving a Tony Award this year for Matthew Lopez’s “Inheritance,” which made history as the first time a Latino playwright won for best play.

Fernandez, who is on the board of directors of Zoetic Stage at the Adrienne Arsht Center for the Performing Arts, was instrumental in having the play shown during the pandemic. “Borrowed” initially streamed on Broadway Virtual, another of his business partnerships with Kierstead, then as part of Zoetic Stage’s Virtual Play Reading Series.

The story of how it became a film started before the pandemic shut everything down, however. Fernandez attended the Miami Film Festival screening for Betancourt and Ortega’s film, “The Last Rafter,” at the Tower Theater in March 2020 — and struck up conversation with Ortega, which led to more conversations about potentially partnering on future projects.

“I showed them the Zoom version of ‘Borrowed,’ and they liked it,” he says. “Carlos and Oscar said they had a window of time for a second project that they could do in August of 2021 … They sat me down and said they wanted their second project to be ‘Borrowed.’ ” 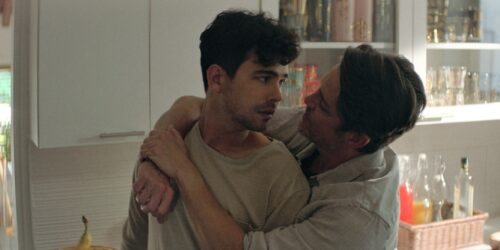 Actors Hector Medina, left, and Jonathan Del Arco infused their own backgrounds into the characters. (Photo courtesy of Jose Rovira)

Being a producer, Fernandez’s first thought veered toward fundraising.

“But Oscar and Carlos said something that was magnificent. They said, ‘If you guys are willing to do this, let’s fund it ourselves,’ ” he recalls.

Fernandez called Kierstead and, within an hour, they had a deal. They split the costs and ended up making the film for just under $500,000, according to Fernandez.

Turning “Borrowed” from a play format to screenplay was the next order of business. The playwright and the two filmmakers started to adapt the story.

“I trusted the play to these professionals and their vision,” Kierstead says. “They are beautiful filmmakers, and the story unfolds in such a lovely way.”

The setting was moved from New York City to the Florida Keys. David, who is played by Jonathan Del Arco, is an artist living a secluded life in the Keys, kept company only by his paintings. If Del Arco’s name sounds familiar, it’s likely for his roles in the “Star Trek” television franchise, including his most recent, playing Hugh on “Star Trek: Picard,” which streamed on Paramount+.

Justin, who meets David through a dating app, is played by Hector Medina who starred in Betancourt and Ortega’s “The Last Rafter.”

Betancourt explains that working with two Latinx actors played into the film’s identity: “The first idea was that Justin would be Latino and would speak Spanish or Spanglish. And then we cast Jonathan, who is from Uruguay, and that elevated David’s character, so that he is also Latino.” 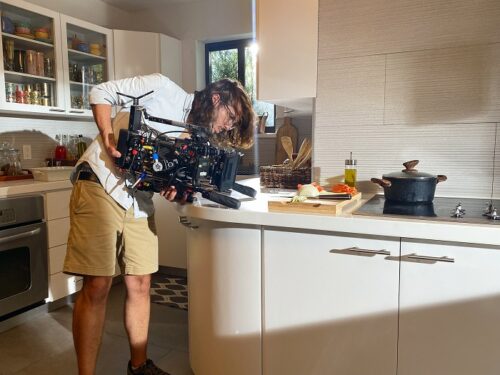 Filmmaker Oscar Ernesto Ortega in the middle of shooting. He and Betancourt had founded a film production company in Cuba before moving it to the United States. (Photo courtesy of Jose Rovira)

The filmmaker says the actors infuse their own backgrounds into the characters.

“David’s character never says where he is from, but he gives the vibe of someone who is clearly from South America — Argentina, Chile, Uruguay. Justin has more of the Caribbean or Venezuelan vibe,” he says. “David is also a man of his generation and has been shaped in a way that there are certain things that you don’t violate. Justin is challenging all that.”

It was a very conscious decision on the filmmakers’ part, Betancourt adds, to explore the characters’ identities in a Hispanic context.

“There is LGBTQIA (lesbian, gay, bisexual, transgender, intersex, queer and/or questioning, asexual and/or ally) subject matter and exploration of themes around that, and then there is the Latino and Latinx experience, the immigration experience, and the fish-out-of-water in bigger worlds. There’s a lot in ‘Borrowed’ that we explore,” says Betancourt, who in 2008 founded a film production company in Cuba with Ortega, before they moved it to the United States.

Now that the movie has finished filming in Miami Beach, on Key Largo in Tavernier, and in Los Angeles, the foursome of Fernandez, Kierstead, Ortega and Betancourt are actively working to get “Borrowed” into film festivals across the United States, in Europe and Latin America. It’s possible the movie could follow the same course as “The Last Rafter,” being shown in festivals and then on a streaming platform. In the case of “The Last Rafter,” the independent film was picked up by HBO and shown on its HBO Max and HBO Latino platforms.

“We are actively seeking film distribution,” Betancourt says, “but we do not want to go straight to streaming. We are defending our festival round as much as possible unless we get an offer that we just can’t refuse.”