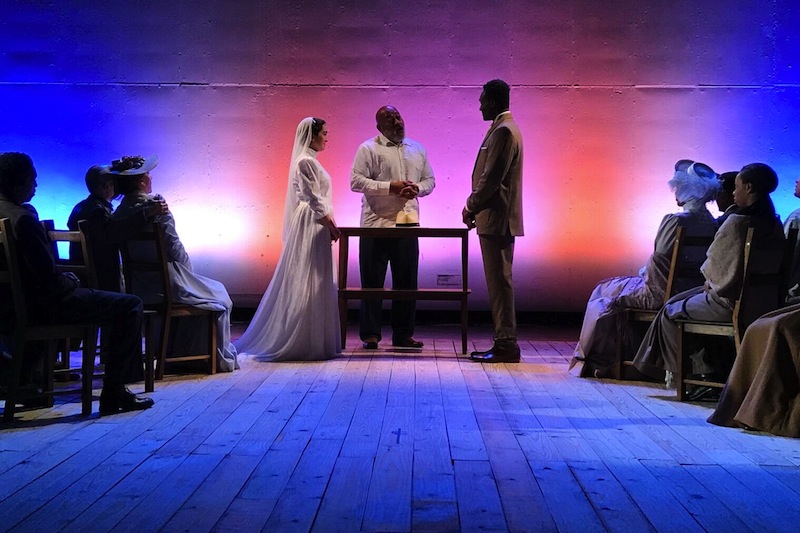 We are born. We live, have families, grow old. We die, leaving those who loved us to mourn.

Playwright Thornton Wilder brilliantly captured the eternal verities of our journey through life in “Our Town,” his 1938 Pulitzer Prize-winning play about life, love and death in a small New Hampshire town at the turn of the 20th century.

If you’re at all drawn to theater, you’ve probably seen a production (or two or three) of Wilder’s metatheatrical drama. Maybe you’ve even been in one. But you have never seen an “Our Town” quite like the exquisite, emotionally potent production Miami New Drama has just opened at the Colony Theatre on Miami Beach.

Without altering the setting (Grover’s Corners, New Hampshire), the time period (1900 to 1913) or the deliberately minimalist presentational style of the play, Miami New Drama artistic director Michel Hausmann has crafted an “Our Town” that hews to his company’s mission – creating work that speaks to and reflects South Florida’s richly diverse 21st century audiences.

In this case, Hausmann got permission from the Wilder estate to allow the translation of certain lines into Spanish, others into Creole. Then he hired Miami Pulitzer Prize winner Nilo Cruz to do the Spanish translations and Miami-born, New York-based Jeff Augustin to supply the Creole lines.

The conceit is that the family of newspaper editor Charles Webb speaks Spanish at home, while the family members of town doctor Frank Gibbs often speak to each other in Creole. The vast majority of the play is performed in English, exactly as Wilder wrote it, and the English translation of the lines now spoken in Spanish or Creole is projected on the back wall of the stage (think supertitles in opera), so there is never any confusion about what’s being said.

That may sound like a gimmick designed to stir up interest from a hometown audience, but it most assuredly works on a much deeper level. The language differences give the families a special, specific way of communicating, of underscoring their bonds.You can hear the emotional resonance as the audience responds.

Hausmann and musical director Salomon Lerner also pull a contemporary audience into the play’s world by having the large cast, dressed in period costumes, sing pointed and poignant (yet deliberately anachronistic) selections from such songs as “In My Life,” “Hallelujah” and “Over the Rainbow” before the show begins. And they invite the audience onstage to have a wedding reception dance party with the cast in the break between the second and third acts.

In a play that has always encouraged observers to join in its make-believe, a piece that largely dispenses with scenery and uses sound effects in lieu of props, Miami New Drama’s choices expand the audience engagement.

In casting his “Our Town,” Hausmann has put together a multicultural company of actors from South Florida, New York, Venezuela and top-tier regional theaters, blending his diverse artists into one glorious ensemble.

Keith Randolph Smith, a veteran of a half dozen Broadway productions (including several August Wilson plays), is the Stage Manager, our guide into Wilder’s world. Wearing a guayabera and clutching a panama hat, he speaks to the audience directly, sometimes stepping into the action, most notably to join George Gibbs and Emily Webb in marriage.With his richly resonant voice, sparkling eyes and humorous warmth, Smith becomes a kind of conduit of energy and emotion between the performers and the audience.

Though “Our Town” has a sizable array of characters, the play focuses particularly on George and Emily as they move through those stages of life. Hausmann has found a pair of charismatic, wonderfully skilled young actors to play those key roles. Martin K. Lewis, a tall and strikingly handsome performer with a heart-melting smile, gives us a George who begins as a teenager with a crush and ends as a man whose world is shattered. Thallis Santesteban’s Emily journeys from a bright and focused girl to a woman who embodies the fragility of life.

Chantal Jean-Pierre as Julia Gibbs and Carlota Sosa as Myrtle Webb radiate nose-to-the-grindstone strength as wives and mothers whose dawn-to-nightfall burdens are noted by the Stage Manager. Robert Strain is a cooler father as the hard-working Dr. Gibbs, Luigi Sciamanna an endearingly warm one as Mr. Webb.

In other roles, Stephen G. Anthony brings the sound of New England to his performance as Constable Warren, while Jeni Hacker shines in a pair of funny roles, as the lecturer Professor Willard and the town gossip Louella Soames.Andy Quiroga is haunting as Simon Stimpson, an alcoholic choir director and organist, and Steve Gladstone as undertaker Joe Stoddard represents the strongest connection between the living and the dead.

The fine company also includes Gabriel Bonilla as Sam Craig, Rafael Romero as Howie Newsome, Jayla McQueen as Rebecca Gibbs, Nathalia Martinez as a dead woman, Isaiah Badley as paperboys Joe and Si Crowell, and Lucas Castillo as Wally Webb, whose journey through life will be even more brief than his sister’s.

In “Our Town,” Wilder has composed a snapshot of a way of life that no longer exists. But the play endures because it is also a timeless template for the way we live, love and suffer loss.Miami New Drama’s glorious “Our Town” brings that template into sharp, engaging relief.