Playwright Joseph McDonough, artistic director William Hayes and actor David Kwiat had something in common when they began working on “Ordinary Americans,” the already-extended play that will get its world premiere at Palm Beach Dramaworks this week before moving on to a run at GableStage in mid-January.

Not one of the seasoned theater artists was familiar with the multitalented woman at the heart of the show, Gertrude Berg.

Berg – who created a 15-minute radio comedy titled “The Rise of the Goldbergs” in 1929 and later took the retitled “The Goldbergs” to CBS television in 1949 –wrote more than 12,000 scripts while playing Molly Goldberg, the matriarch of a Jewish family living in a Bronx tenement.

“She acted, wrote and produced,” says Carbonell Award-winning actor Elizabeth Dimon, who portrays Goldberg in “Ordinary Americans” and who had the idea for the play. “Today, she would be Oprah Winfrey.”

Originally, Dimon intended to write the play herself. Hayes told her about a Theatre Communications Grant for “mature” artists, but that didn’t come through, and Dimon thinks that’s just as well.

“I’m not a writer. My strong suit is bringing your words to life,” she says.

By then, Hayes was hooked on the idea, so he commissioned Cincinnati-based playwright McDonough, whose play “Edgar and Emily” (a fantasy about a meeting between poet Emily Dickinson and the long-dead writer Edgar Allan Poe) was developed at Dramaworks’ Dramaworkshop and subsequently got a main stage premiere in 2018.

The men have spent about 2 1/2 years working together on “Ordinary Americans,” with McDonough writing and Hayes serving as director and dramaturg. They have developed the script in person and over the phone, doing workshops with Dimon and most of the actors now involved in the show.

During the play’s evolution, a key tragedy was moved from the middle of the play to the end, a character was eliminated, and the script was tightened to about 90 minutes. Thematically, “Ordinary Americans” grew from a portrait of Berg to an examination of the way McCarthyism and the blacklist of the early 1950s affected Berg, her fellow cast members and her show.

Kwiat, a Carbonell-winning actor who retired after a long teaching career at Miami’s New World School of the Arts, plays Philip Loeb in “Ordinary Americans.” Loeb played Molly’s husband, Jake, on “The Goldbergs,” and as an activist with many organizations, he helped Actors’ Equity secure rehearsal pay for actors.

Loeb, who was the sole support of an adult son with schizophrenia, wound up in the infamous “Red Channels” report on alleged Communist influence in radio and television. CBS demanded that Berg fire Loeb, which she initially refused to do.  “The Goldbergs” was yanked off the air for more than a year, putting everyone out of work, though it returned after Loeb agreed to accept a settlement from Berg and leave the show.

That decision, however, was the beginning of the end for Loeb.

Although “Ordinary Americans” contains some funny scenes showcasing the comedy of “The Goldbergs,” Kwiat says that the play “is pretty dark, since it involves McCarthyism and blacklisting. The majority of it is dealing with the painful struggle of the politics of that day … I don’t think the audience knows what it will be seeing. Bill and Joe wanted to write a tragedy.”

Researching Loeb through extensive reading and watching clips on YouTube, Kwiat observes, “He was a total minimalist.  It was Gertrude Berg’s show, and he deferred to her.”

Dimon, who had a deep interest in the blacklist, felt she could play Berg, “a woman of a certain age, a certain size … People connected with her because of her warmth. She would say, ‘Greetings from our family to your family.’ The first time I did it, I almost choked up.”

Berg, called “Tillie” by her friends and family, was a sophisticated New Yorker who would win the first Emmy Award given to best lead actress in a comedy in 1951 and a best actress Tony Award in 1959 for her performance in the Broadway production of “A Majority of One.”

On “The Goldbergs,” the characters spoke in a dialect – Molly would be beckoned to her window by a neighbor calling, “Yoo-hoo, Mrs. Goldberg!” – and when the series returned to the air, the appetite for a comedy about a Jewish family had waned.

“The culture had changed. Nobody wanted to see ethnicity anymore,” Dimon says. “When I first thought of this play, I wanted it to be about her.  But it was very important that it be focused on the time period and the blacklist. I’m so afraid it will repeat.” 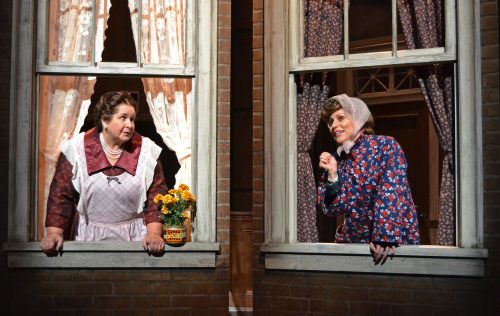 Hayes dreams of a larger future for “Ordinary Americans,” and the first step was partnering with Joseph Adler and GableStage to co-produce the world premiere. Dimon, Kwiat, Rob Donohoe and Tom Wahl will do the play at both theaters; Margery Lowe will appear in the Dramaworks version but has another commitment next month, so Patti Gardner will step into the role of Berg’s business manager and best friend when the show moves to GableStage.

“I believe theaters need to find opportunities to partner and not be competitive,” Hayes says. “We’re stronger together. A lot of excitement and momentum happens when you do such things. It keeps the momentum going for the play, and exposure to each other’s audiences helps Joe and me and all the artists involved.”

The director, playwright and actors all feel the contemporary resonance of “Ordinary Americans.”

“There’s fear and paranoia in our society. People are as politically divided as they were in the ’50s,” McDonough says. “I’ve tried not to be heavy-handed. I’m trying to be truthful to their story and not drop in external things. But the parallels write themselves.”

Research is a process McDonough enjoys when he’s writing plays involving historical figures. He read a biography as well as Berg’s autobiography and watched a documentary on her. But he didn’t find a great deal of additional source material.

“She’s been so forgotten in our society,” he says.

As for Loeb, McDonough found something deeply moving at the New York Public Library.

“I discovered his personal papers, his handwritten notes as he prepared to testify … ” the playwright says. Loeb went before the Senate Internal Security Subcommittee in 1952. “That was very awe-inspiring. It felt like a sacred calling to reflect his thoughts.”